This green-contour heat map is a Cool Golf Thing

No matter how often I play my two home courses, there are certain putts I seemingly always misread. I'm not the only one - most of my regular Saturday group will lodge the common complaint about a putt "breaking uphill" at least once a round. Never mind such a phenomenon is impossible by definition; a golfer punked by that particular trompe l'oeil doesn't care about the laws of physics.

One particular green really vexes me. It's a two-tiered affair whose lower front level seems to tilt ever-so-slightly toward the front. Nevertheless, when the flag is anywhere but on the back shelf, putts never seem to do what they should, often seeming to be pulled, beyond all reason, toward the green's dominant slope. Now I know why. A friend who does PR for PuttView green books ($49 for a combination green and general yardage guide) recently sent me one for the course that is home to the green in question. Upon receipt I immediately turned to the 11th green and what I saw confirmed my suspicions: an almost imperceptible mound in the front-right quadrant, nudging certain putts toward the dominant upward slope, rather than away from it.

I never want to stand on a green alternating glances between book and actual grass, but nevertheless I find PuttView's useful for gaining a deeper understanding of a course I play often. Cool blues of flat terrain give way to brief blips of fiery orange and red that signal sudden contours. Cavalcades of arrows and grids of slope percentage figures appeal to the DeChambeau-wannabes out there, but the heat map is what I most appreciate. It's a rare piece of golf technology that can deepen a feel player's relationship with a course, rather than clutter it. 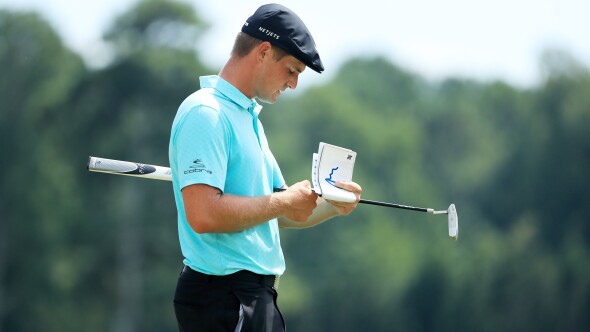 Articles
4 Min Read
RELATED: Do yardage books still have a place in golf?
With apps and in-cart GPS on the rise, what can a standalone course guide offer?