DENVER, Colo. - As golf courses maintain elevated levels of participation in 2021 (down from 2020's peak but still generally up compared to 2019), many municipal golf courses are benefiting from an influx of green fees. Others are enjoying the fruits of recent ambitious projects that made their courses better for residents than ever before. Denver's City Park Golf Course, enjoying its first full season since a multi-year closure, is basking in mile-high reviews in 2021.

Denver is one of the best golf cities in the United States with a huge roster of private and public courses. Within 30 miles of the city center, there are 117 courses, 89 of which have public access. And yet it still seems like a metro area where scoring tee times on a weekend is an uphill climb. The city's municipal system of eight facilities has a diverse offering from pitch-and-putts to championship layouts. Wellshire Golf Course is a historic Donald Ross design, but it's not the oldest muni. That goes to City Park, established in 1920. Now, 100 years later, the course is back on top.

The new City Park course was remodeled by architect Todd Schoeder and is a par 70 with returning nines, a full-size driving range, and a 4-hole course for the First Tee of Denver. It also has a brand-new clubhouse with environmentally sustainable features like solar panels and local materials. But much of the City Park project - pegged at $46 million and taking nearly 3 years - was centered on storm water management and drainage for the surrounding neighborhoods.

We haven't made it to City Park yet ourselves (hopefully in 2022), but thanks to our robust community of reviewers at GolfPass, we can see how this new project is being received thus far. While local reviewers described the previous iteration of City Park as everything from "ordinary" to "lousy" to a "goat track," their tune has fully changed. In 26 reviews from the past six months, it has an overall star rating of 4.8/5.

"Compared with the pre-2019 City Park course, it's a breath of fresh air and in many ways a brand new course," wrote 'AceGerard.' "Greens are a little larger and with more undulations, some driveable / short par 4s, as well as some tough longer par 4s and 3s for a par-70 layout."

Many reviews are calling the brand new clubhouse "gorgeous," but are now lamenting how tough it is to get a tee time. Reviewer 'QuantomGolfX' mentioned getting lucky with a last-minute cancellation that resulted in a coveted reservation. At $31 walking, the value for the round was no doubt five stars.

"The greens at city park are quite small and I found them to be very fast and smooth," wrote QuantomGolfX. "You will need a sharp short game to score well out here. Conditions of the course were very good, I did not see any bare spots or brown turf on the grounds. Very nice for a Muni!"

"I last played the old City Course in 2017," wrote JimmyMartin2020. "And it was fine but, somewhat felt like an old urban course over-crammed with trees, somewhat dated and old. Love the new course, the layout is great, much more open but not easier by any means and if you ave not played it yet, get 'er done. Greens are in great shape, rough was rough as expected with all the recent rain, rangers on the job keeping people moving."

The ambitious City Park renovation and redesign hasn't received as much national press compared to other muni renovations like Houston's Memorial Park built to host the PGA Tour, or the Charleston (S.C.) Municipal Golf Course, which attracted Golden Era-architecture buffs for its tribute to Seth Raynor. But it's clear the total City Park Denver project is earning lots of happy customers, and at $48 walking on the weekends, it's proving to be one of the best values in the west - if you can land a tee time. 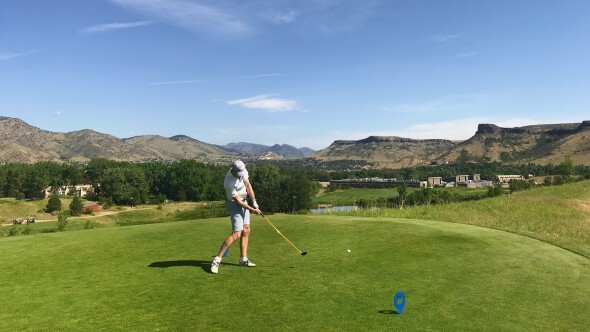 The oldest course in the Denver area is the Overland Park Golf Course which was designed by William H. Tucker and opened in 1895. And yes it is part of the Denver course offerings. (simple google search will tell you its older than City Park)