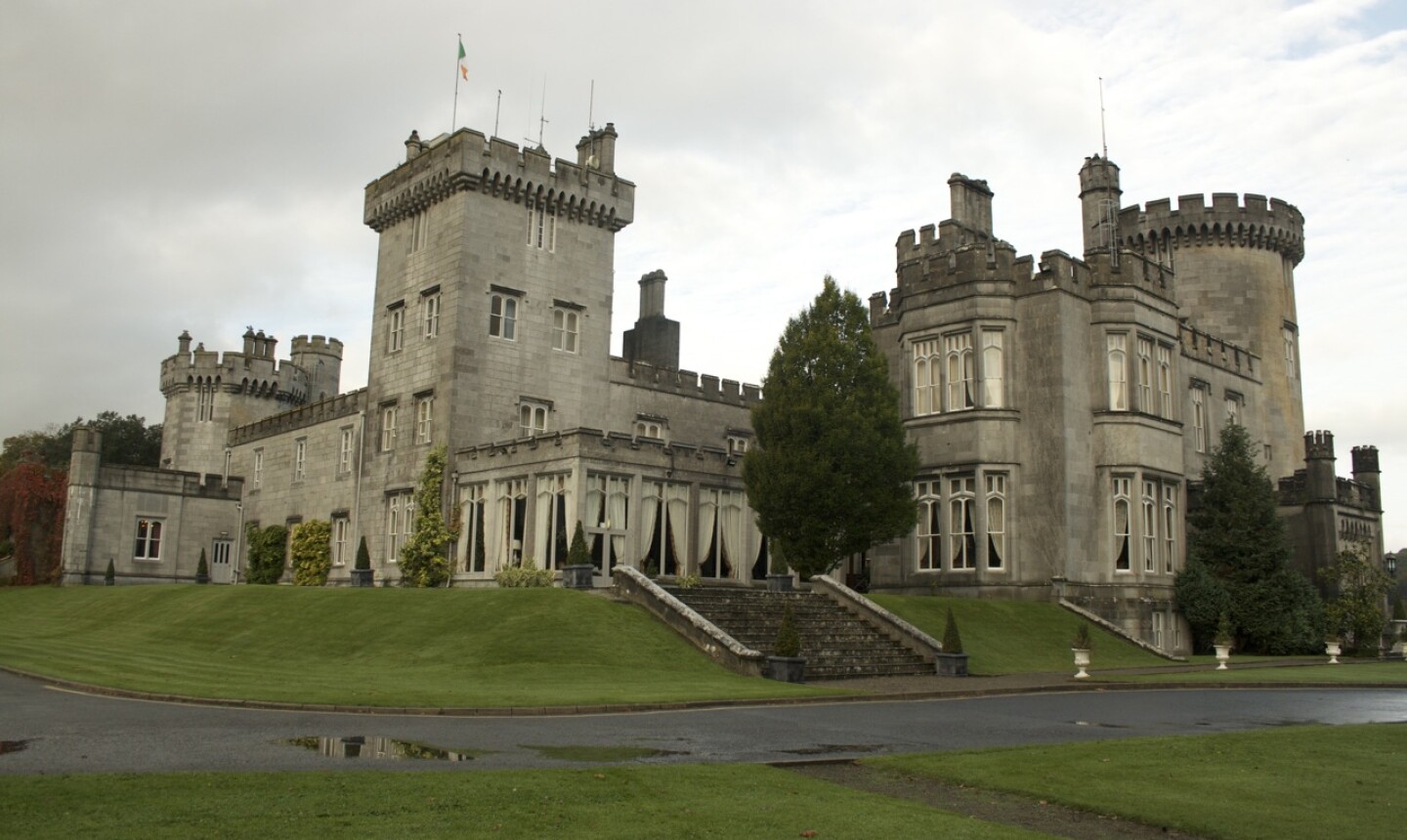 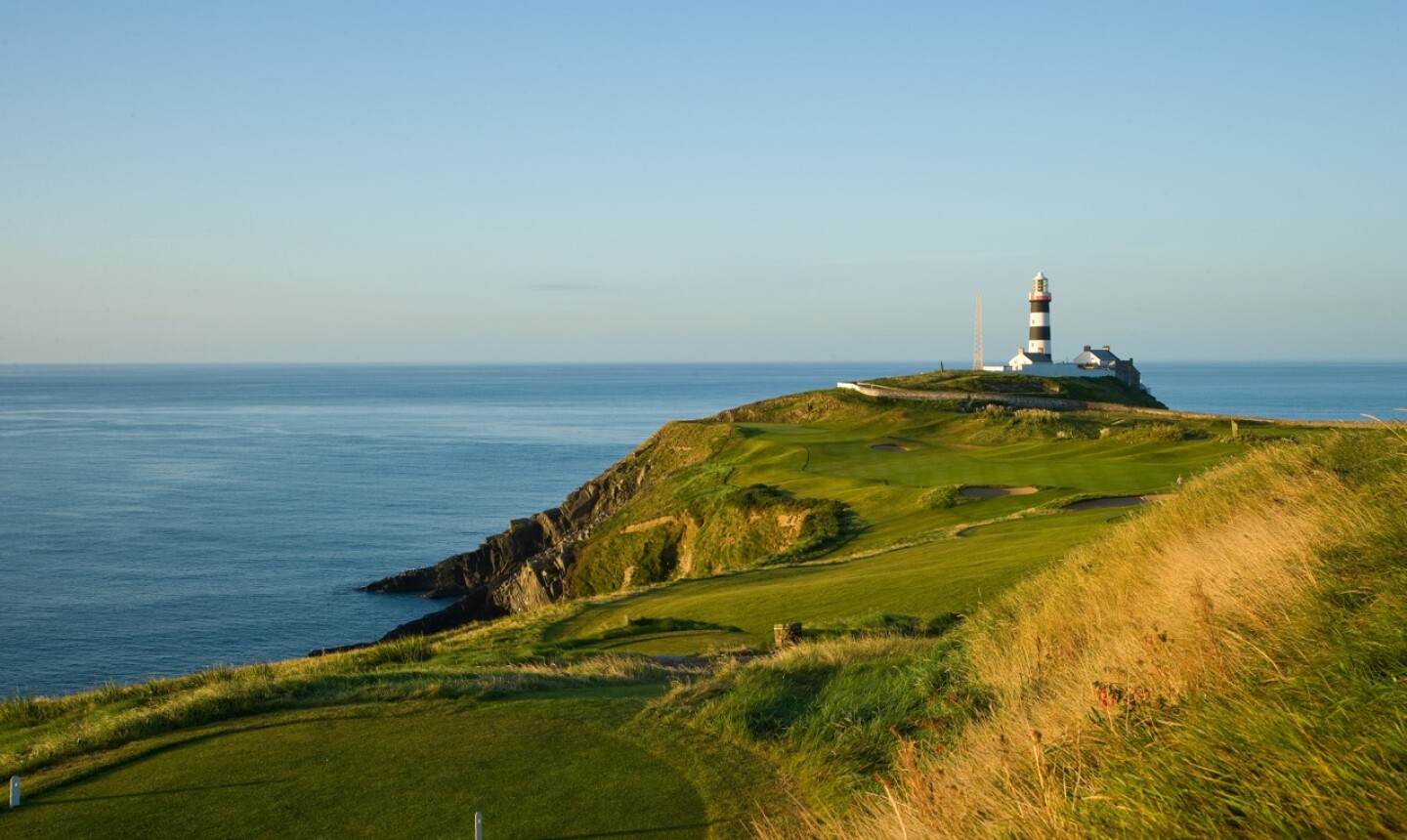 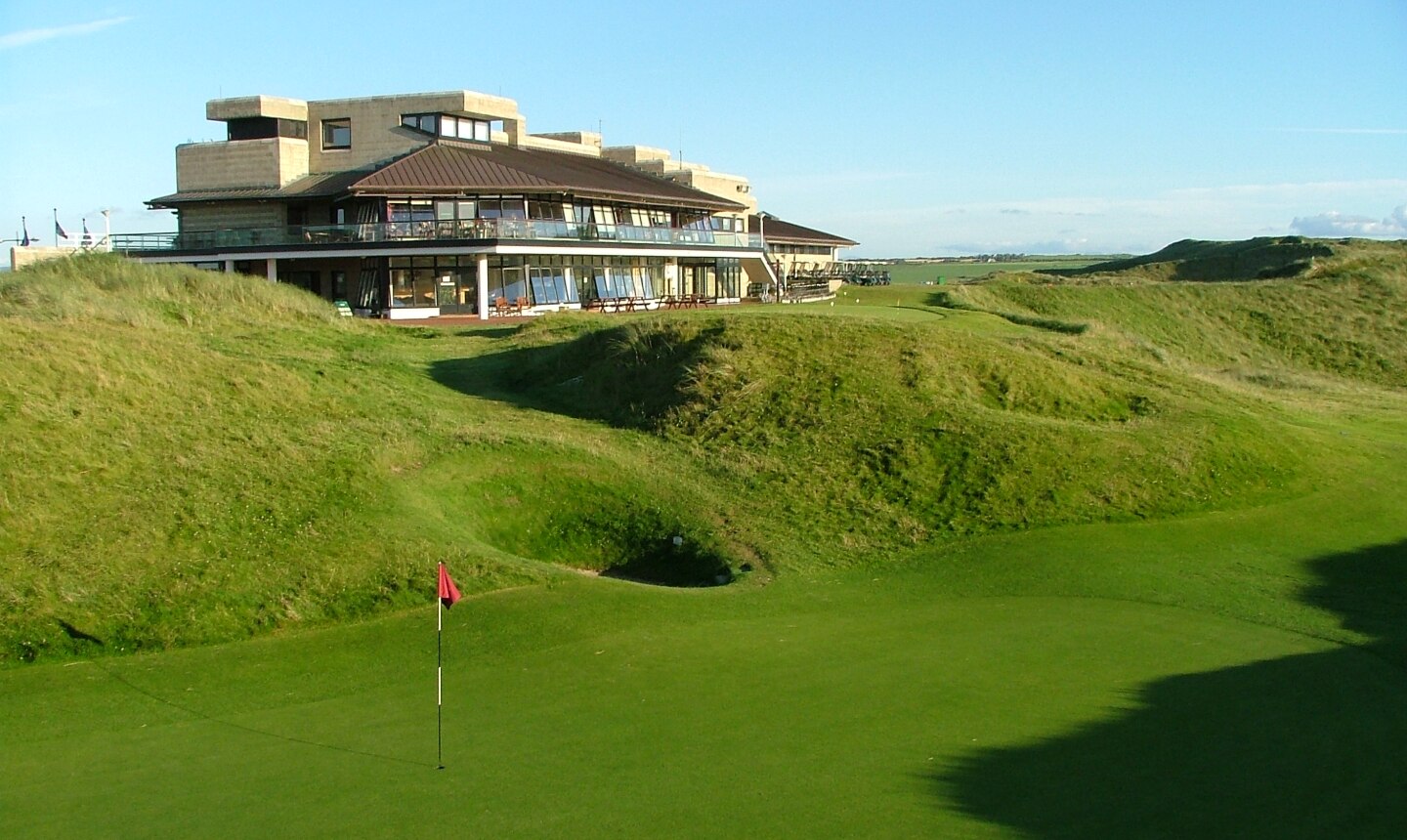 Historic Ballybunion Golf Club is home to one of Ireland's most impressive clubhouses and practice facilities. Courtesy of Ballybunion G.C. 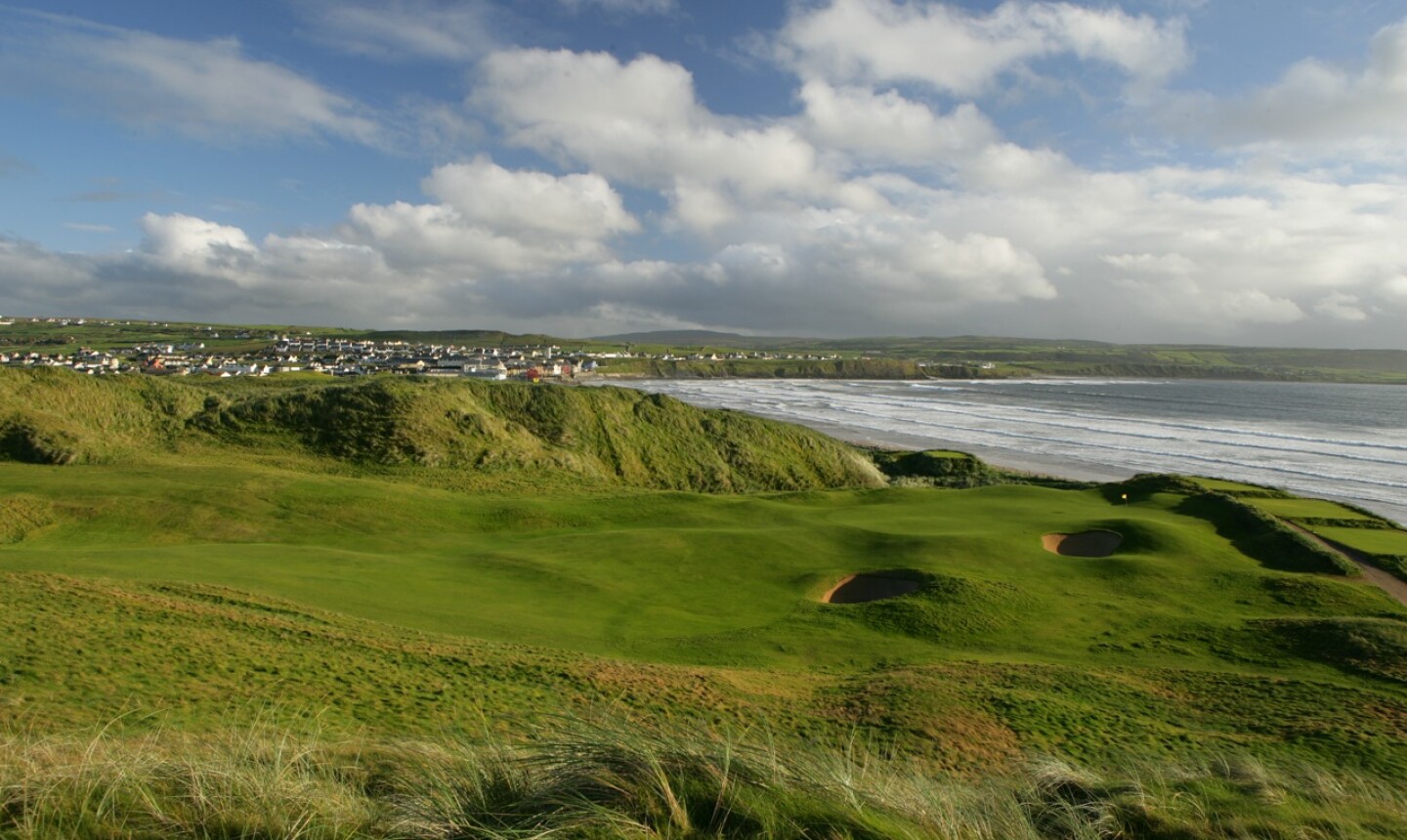 I cringe every time I am asked to pick my favorite golf courses in Ireland.

It's such a tough topic. The links golf is so good everywhere on the Emerald Isle.

Northern Ireland boasts two of the top 10 links in the world, Royal County Down and the Dunluce Course at Royal Portrush, and some underrated beauties like Ardglass Golf Club. Playing at Enniscrone, Ballyliffin and Rosapenna (among others) in the northwest might be the best value for links golf in the world. Many of the four-star parkland resorts surround Dublin, along with a fine collection of dunes and links north of the city.

When forced to choose, southwest Ireland tops my list for a variety of reasons -- the luxury of Doonbeg, the castle at Dromoland, the quirks of Lahinch, the legendary status of Ballybunion and the jaw-dropping scenery of Tralee. Toss in the Old Head Golf Links in nearby Kinsale for a golf trip stocked with more headliners than an Ocean's Eleven movie.

There are other reasons why southwest Ireland rules.

 Tourist attractions such as the Cliffs of Moher right up the road from Lahinch Golf Club in County Clare and the scenic Ring of Kerry drive near Waterville Golf Links in County Kerry.

 A shorter flight from New York (about a half-hour) to the smaller Shannon Airport than the larger Dublin Airport. The user-friendly Shannon Airport was the first airport in the world, outside of the Americas, to offer full U.S. Customs and Border Protection (CBP) preclearance, an even bigger perk.

 Better accommodations than the northwest. The Dromoland Castle Hotel, located in Newmarket-on-Fergus, County Clare, just 20 minutes from the airport, is ideal for lodging on the day of arrival or departure.

Unfortunately, weather isn't always a strong suit. The region takes the full brunt of the wet and wild storms that barrel in from the Atlantic Ocean. Pack a rain suit, rain gloves and an extra pair of shoes. Price is an obstacle as well. The pricier green fees prove I'm not the only one who covets the links of the Southwest.

Day 1: Upon landing in Shannon, make a beeline for the Doonbeg resort an hour west of the airport. Although the rooms and suites are lush, don't nap. Head right out to an exhilarating round on the Greg Norman-designed links. Doonbeg's golf course, softened over the years, still maintains its cool quirks: a few blind shots and a bunker in the middle of a green. Doonbeg, recently purchased by Donald Trump, will be renamed "Trump International Golf Links Ireland."

Day 2: Spend the morning at Lahinch Golf Club, a top-100 track up the coast, and the afternoon at the Cliffs of Moher, or vice versa. Those who can't afford another night at Doonbeg can move to the four-star Vaughan Lodge Hotel within walking distance to the course and downtown pubs and restaurants.

Day 3: Take the car ferry in Killimer across the wide mouth of the River Shannon to save miles and headaches on the road driving around the river through Limerick and back to Ballybunion. Play the Cashen Course, a tricky Robert Trent Jones Sr. design, as a warm-up to bigger things.

Day 4: The famed Old Course at Ballybunion starts off with a do-or-die shot off the first tee. Most golfers take a mulligan or free drop if their first attempt lands in the cemetery along the right side of the fairway. From the fifth hole on, there might be no finer golf course. The dunes take on a life of their own.

Day 5: From Ballybunion, it's less than an hour's drive to Tralee Golf Club in County Kerry, a links that looks like it was designed by Old Tom Morris in 1884, not Arnold Palmer circa 1984. The cliffs of the second hole and castle ruins behind the third green set the stage for the rousing back nine, a loop some believe to be the best in Ireland. Options abound afterward. A second 18 at nearby Dooks Golf Club in Glenbeigh? Sightseeing along the Ring of Kerry? An afternoon in Killarney? The rooms at the Killeen House Hotel in Killarney are three-star, but the hospitality and food are five-star.

Day 6: The morning drive to Waterville should take an hour or so. I'm hankering to get back to this top-100 choice that has been redesigned by Tom Fazio since my last visit a decade ago. To get the full Waterville experience, book early to nab one of the 12 rooms at the four-star Waterville House, an 18th-century manor.

Day 7: By now, every foursome will feel road-weary from changing hotels every night. Old Head provides the perfect shot of adrenaline. The visuals of 300-foot cliffs blow golfers away. It occupies a 220-acre diamond-shaped promontory that juts into the Atlantic Ocean, featuring a lighthouse perched at land's end. Tees and greens sit precariously close to the edge of the earth. Big spenders stay on site in the luxury suites under the clubhouse. A better place could be a night in Kinsale, a fishing village stocked with bars and restaurants. The Blue Haven Hotel is within walking distance of 30 pubs and 12 internationally renowned eateries.

Day 8: For those who can only stay a week, the long journey home starts with a three-hour drive back to Shannon. Road warriors who wisely extend their stay will be rewarded in the charming village of Adare near Limerick, where RTJ Sr. built a strong parkland course with a backdrop as pretty as a links and a layout tough enough to host a few Irish Opens. Adare Manor (roughly a two-hour drive from Kinsale) flows along the River Maigue and showcases the stunning architecture of the neo-gothic manor, where guests rest easy for the night after wining and dining.

Day 9: I've saved the two five-star experiences for the tail end of the trip, when every golfer needs a little pampering. Dromoland (20 minutes from the airport, remember?) dates back centuries as a defensive stronghold. The 99-room castle, which celebrated its 50th anniversary as a vacation destination in 2012, is surrounded by more than 450 acres of breathtaking scenery, including its own lough (an Irish lake), river, forests, gardens and a solid golf course. After their round of golf at Dromoland Castle, guests can party like it's 1799 by listening to a harpist at dinner in the Earl of Thomond restaurant or by practicing falconry, one of the oldest forms of hunting.

Day 10: There are tricks to make departure day a little more tolerable. First, collect all the pictures from every camera in the foursome and save them to a computer. Second, organize everybody's favorite photos for an album to be made later. Lastly, between naps on the flight, start planning the next Irish golf getaway. More great adventures await. 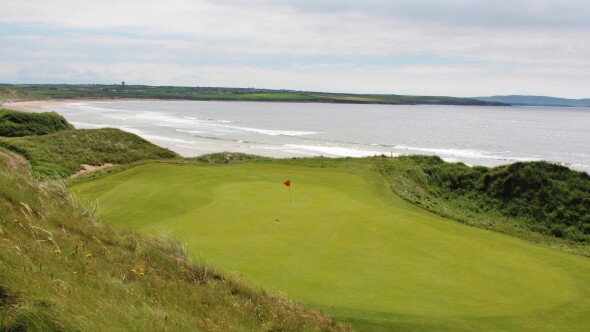 Galleries
SW Ireland: A parade of magical links line the coast
Lahinch, Ballybunion and Waterville elevate southwest Ireland into one of the most sought-after links golf destinations in the world.
8 Images