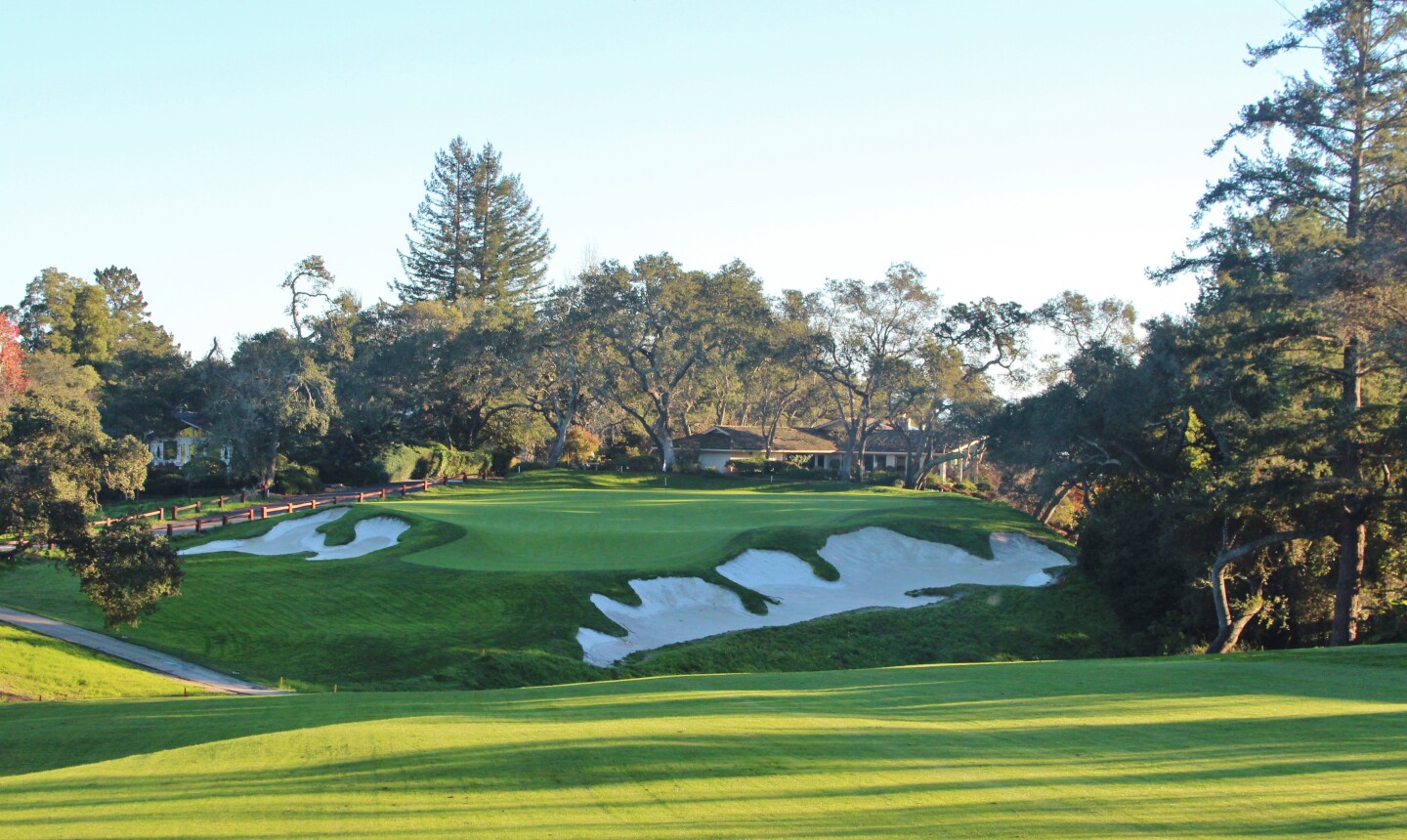 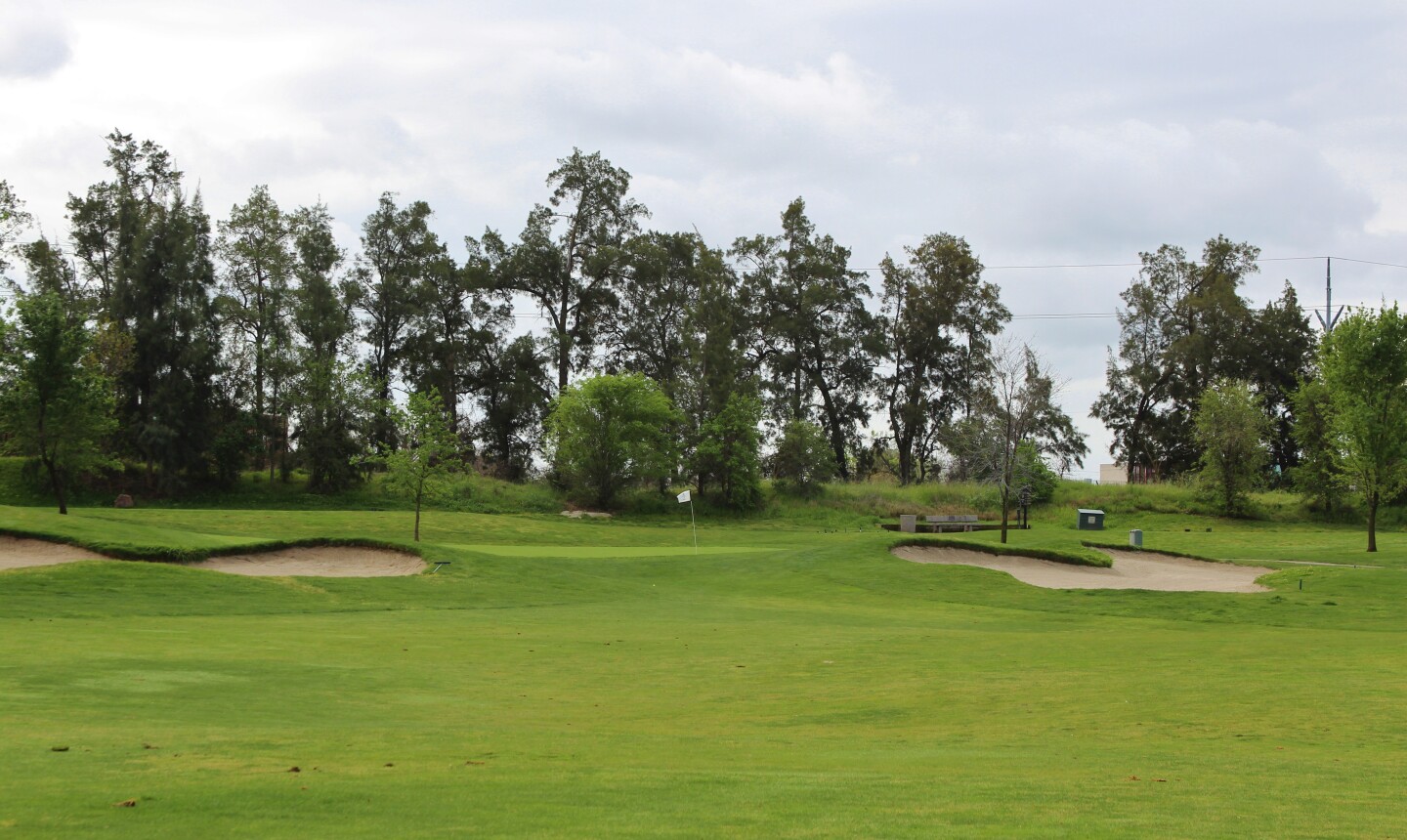 During a renovation project several years ago, the eighth green of the MacKenzie Course at Haggin Oaks was returned to its original location chosen by Dr. Alister MacKenzie. Jason Scott Deegan/Golf Advisor 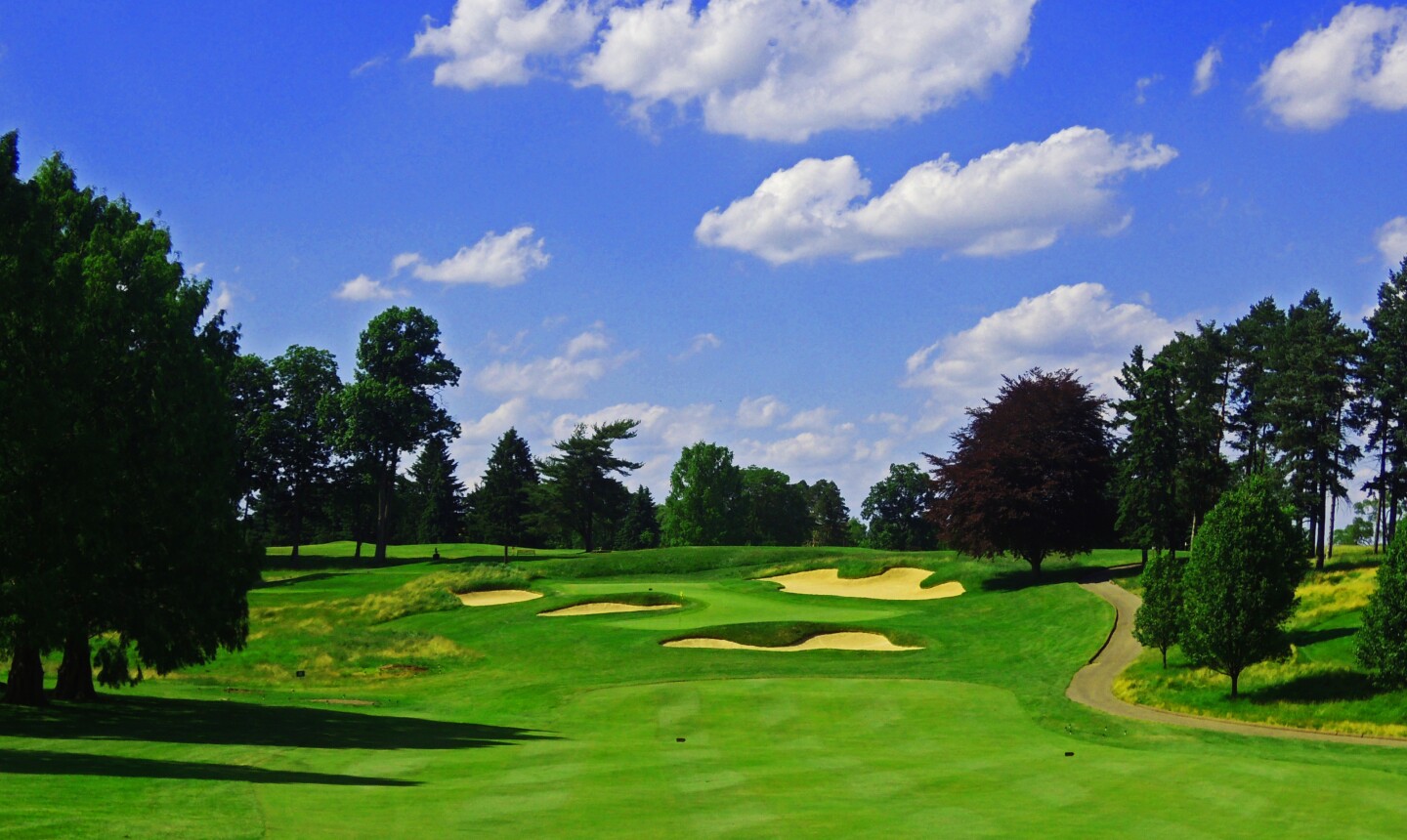 The short par-4 sixth hole at the University of Michigan Golf Course is risk-reward -- with lots of risk. Mike Bailey/GolfPass

Even by modern standards, Dr. Alister MacKenzie was a globe-trotting golf architect.

During a career that spanned from 1907 until his death in 1934, MacKenzie -- a British surgeon in his early years who later lived in Santa Cruz, Calif. -- was given credit for designing courses in England, Scotland, Ireland, Australia, Canada, New Zealand, Argentina and the United States.

Following in the footsteps of MacKenzie to play his best courses really isn't an option for many golfers. Not only must they traverse the world, they must somehow gain access to his ultra-private courses -- Augusta National in Georgia, Cypress Point in California and Crystal Downs Country Club in Michigan.

Since most of us don't have the cash or the connections to pull this off, I'd recommend the next best route: Sampling MacKenzie's U.S. designs open to the public.

Ireland has two great MacKenzie semiprivate courses I've played -- the Old Course at Lahinch Golf Club and Cork Golf Club -- if you're so inclined to go overseas. MacKenzie courses are considered unique antiques to be treasured.

"MacKenzie is synonymous with the magic and charm of the game," said Bo Links, a Bay Area author and lawyer who has spent countless hours working to save MacKenzie's Sharp Park Golf Course near San Francisco. "His courses, they excite you and exhilarate you. This is the one thought when you are done: 'I want to (play) that again.' There is no architect who had such a complete understanding of the game. His courses are not overly penal, not overly long. They are not easy. They are fun and exciting. It is like a puzzle. You have to figure it out."

Finding the public pieces to the MacKenzie puzzle isn't all that hard. It takes just three trips, one to NoCal, another to the Midwest and a visit to the South during the week of The Masters. Most golfers have these trips planned on their bucket lists anyway.

MacKenzie's influence is strongest at the top-100 Pasatiempo Golf Club in Santa Cruz. MacKenzie's former home sits near the sixth green, the ending of a narrow par 5. A statue in the backyard and plaque on the sidewalk mark its location.

His intricate green surrounds and bunkers that sprout fingers in all directions were recently restored by architect Tom Doak, another MacKenzie aficionado who moved to northern Michigan partly because of his love of Crystal Downs. Pasatiempo -- a par 70 of 6,521 yards -- begins by launching off an elevated tee overlooking Monterey Bay. Barrancas crisscross the hillier back nine. The par-4 16th hole ranks as one of golf's scariest holes.

History hasn't been as kind to MacKenzie's two municipal courses in NoCal: Sharp Park in Pacifica and the MacKenzie Course at the Haggin Oaks Golf Complex in Sacramento. Golfers have to look a little harder to find any MacKenzie influences. The 6,382-yard Sharp Park offers more personality from its seaside site than Haggin Oaks, located on the flat land surrounded by highways. Unfortunately, Sharp Park remains in rougher shape, prone to slow greens and flooding. It's still worth the effort to play with unlimited potential for rejuvenation.

The 7,030-yard Haggin Oaks has made a nice comeback condition-wise since Morton Golf took over the maintenance from the city of Sacramento in 2012. MacKenzie's Sports Bar & Grille is home to a trove of memorabilia, articles on past PGA Tour and USGA events held there and even a MacKenzie statue. Interestingly, both courses opened in 1932, the year before Augusta National opened as MacKenzie's lasting legacy.

MacKenzie's Northwood Golf Club, a nine-holer in Monte Rio, seems to charm everybody who discovers it among the towering Redwood trees 80 miles north of San Francisco in wine country. When he visited Northwood, Golf Advisor's Brandon Tucker spent more time looking up at the towering tree canopy than down at his golf ball. When Michigan architect Mike DeVries visited years ago, he marveled at how Northwood grew grass under all that shade. The Russian River borders the 2,893-yard layout on three sides.

Higher learning in the Midwest

Those who want to really go to school on MacKenzie should head to Big Ten country to see the University of Michigan Golf Course in Ann Arbor, Mich., and the Scarlet Course at Ohio State in Columbus. Wouldn't you know it, the Buckeye-Wolverine rivalry even extends to its MacKenzie/Perry Maxwell courses. Which play is better depends entirely upon your loyalty.

The 6,730-yard U-M course across from The Big House opened to the general public for the first time in 2015. A limited amount of monthly packages allows unaffiliated guests to play the U-M course and/or the Radrick Farms Golf Club, a Pete Dye design also owned by U-M, for $120 on weekdays and $145 on weekends. Radrick Farms celebrated its 50th anniversary in 2015. Meanwhile, OSU's Scarlet remains a tougher get, requiring a guest invitation through university employees, students or supporters.

Ohio State legend Jack Nicklaus restored the private Scarlet Course in 2005-06, a task U-M hopes to start. DeVries has already expanded several greens at Michigan to bring them back to their original size and shape and hopes to do more extensive restoration work in the near future. Major donations paved the way for a new clubhouse at U-M completed in 2017.

Personally speaking, the U-M course is, by far, my favorite MacKenzie course to play, even more enjoyable than my rounds at the more highly acclaimed Crystal Downs and Pasatiempo.

The Palmetto Golf Club in Aiken, S.C., is the one private course with connections to MacKenzie where anybody can play. The club started opening its doors to the public for the week of The Masters in the early 1980s, according to Head Golf Professional Brooks Blackburn, and sees many of the same faces year after year. Tee times made available in January generally sell out by mid-March, he said. A mix of architects have influenced Palmetto's 6,713-yard layout over the years.

MacKenzie's work is especially interesting given the timing. After finishing up at Augusta in 1932, he was asked to convert the Palmetto sand greens to grass and lengthen the course. In recent years, Rees Jones (1990s) and Doak (2000s) have done restoration work. Gil Hanse now serves as the club's resident architect.

Nicklaus, Doak, Hanse, DeVries, Jones -- they're all vying to be this generation's MacKenzie, the architect whose courses transcend time.

Jason Scott Deegan
Jason Scott Deegan has reviewed and photographed more than 1,000 courses and written about golf destinations in 20 countries for some of the industry's biggest publications. His work has been honored by the Golf Writer's Association of America and the Michigan Press Association. Follow him on Instagram at @jasondeegangolfpass and Twitter at @WorldGolfer.
16 Comments

Taking offense to your comparison to UM vs Pasietempo. If UM was better than why did MacKenzie decide to reside in Santa Cruz . Also we are listed in the top 100.

Notice my wording: I didn’t say it was better. U-M is my favorite to “play”. Both marvelous.

I've played both. Pasatiempo has a little more special environment as UM is encircled by busy roads, but the greens and bunkering at both are a marvelous.

Played Pasatiempo this past February. Stunning, beautiful and definite “must play again” #16 will almost make you rethink your decision to play golf.

Tijuana Mexico has one that is 30dlls to play

There are some great Mackenzie courses in the UK that are all accessible. Alwoodley, Moortown, Bingley St Ives, Cavendish (which is the model for Augusta), Reddish Vale, Skipton, Nelson. These are in addition to some great Scottish and Irish courses too. Look at his Wikipedia page.

Another fun MacKenzie course to play is the Cork Golf Club outside Cork, Ireland. Worth the stop if headed to Old Head or some of the other links courses in southern Ireland.

Teignmouth in Glorious Devon. A lovely course with wonderful views over Lyme Bay from Portland Bill all the way to Brixham

Dr MacKenzie designed courses all over the world, why are only courses in the USA features in your article?

As I explain in the intro, most US golfers don’t have the means to chase down MacKenzie courses around the world. That’s why we gave them their best American options first.

Probably because you can play all his courses outside the USA.

Perhaps the MacKenzie course you should visit is his first, The Alwoodley Golf Club in Leeds, England, a golf course which is still highly regarded. While you are at it, another MacKenzie course Moortown Golf Club, the venue of the 1929 Ryder Cup, is a short distance away,.

Gil Hanse seems to be moving to the top of the Leaderboard. LACC North, Streamsong Black, Vineyard Golf, Winged Foot...