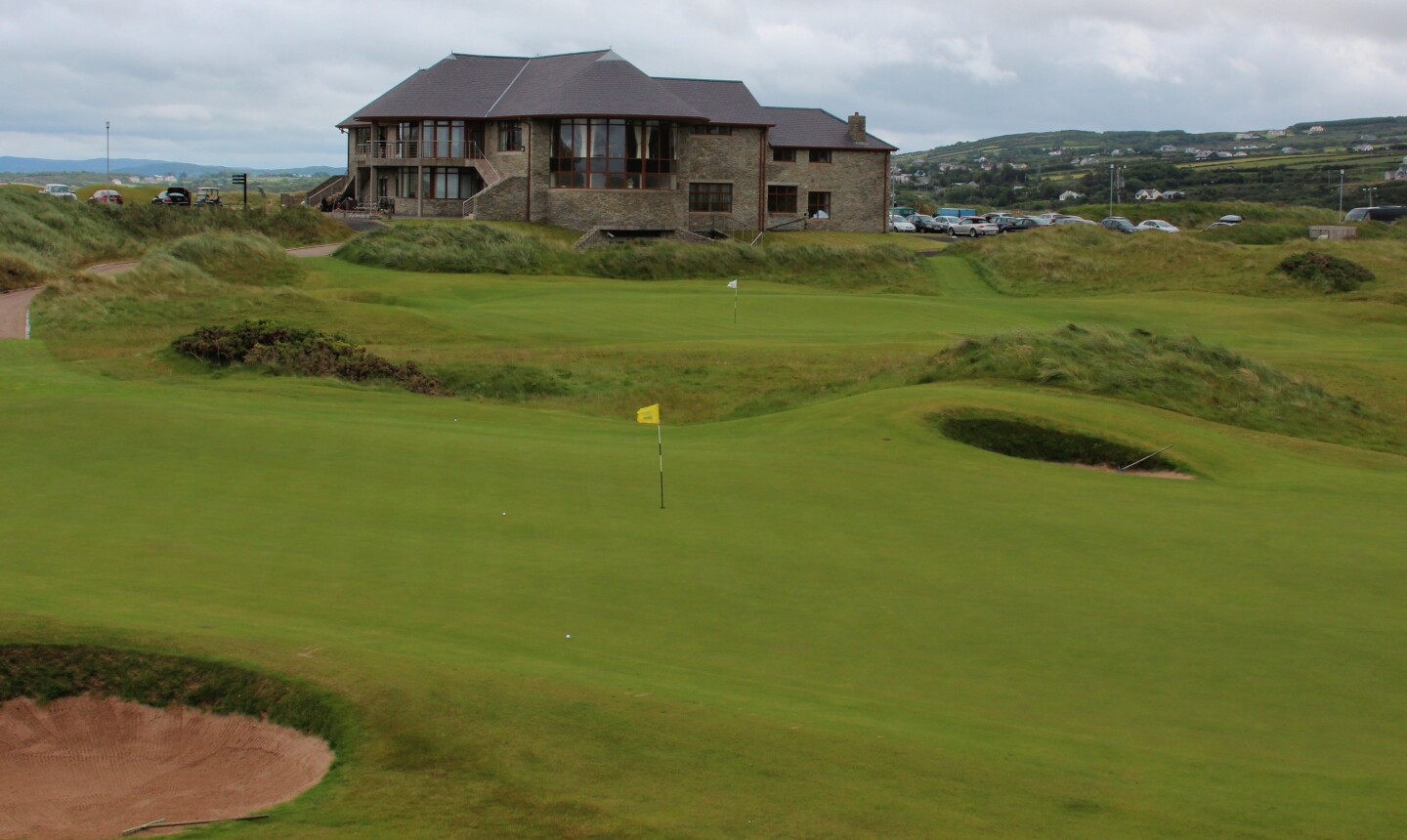 The 18th holes of the Glashedy Links (foreground) and the Old Links at Ballyliffin Golf Club finish at the clubhouse. Jason Scott Deegan/Golf Advisor 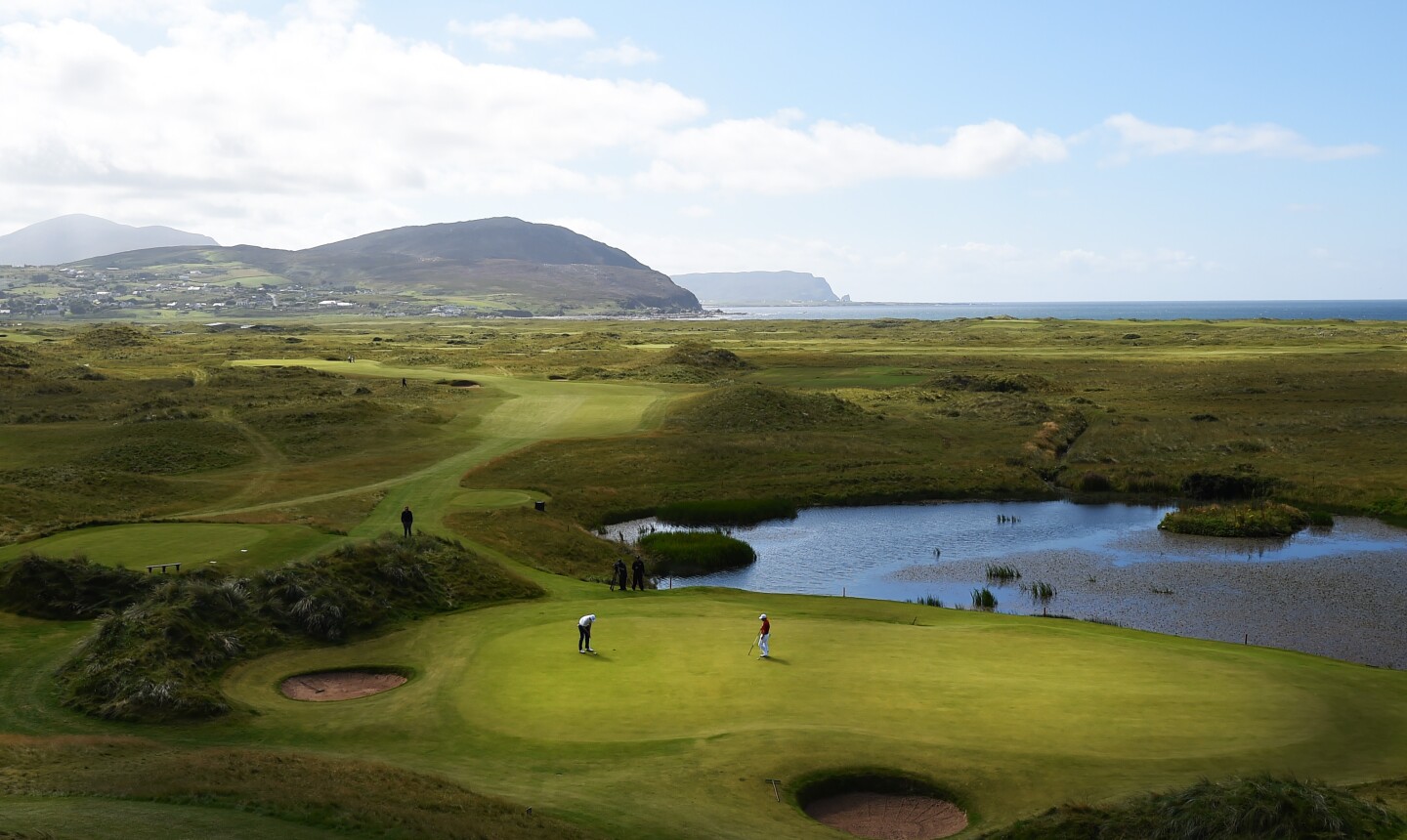 A general view of the 7th green during the Boys Home International Cup at Ballyliffin Golf Club on August 4, 2016 in Donegal, Ireland. Getty Images

When I first visited the Ballyliffin Golf Club in 2006, my tour driver warned me we were going to the "back of beyond," the Irish phrase for the "boonies."

Guess what? Fast-forward a decade, the boonies are ready for the big time. Ballyliffin's Glashedy Links will host the 2018 Dubai Duty Free Irish Open, the first time the European Tour has ventured into the northwest of Ireland.

The announcement is a huge step for a 36-hole club, and the region as a whole, both of which remain off-the-beaten path for so many links-loving Americans. Part of the European Tour’s new Rolex Series initiative, the tournament will be held from July 5-8, 2018.

Ballyliffin, located on the remote Inishowen Peninsula, has long featured inspiring links golf, but getting there has been the problem. Arriving by helicopter in 1993, Nick Faldo so fell in love with the Old Links, he tried to buy Ballyliffin a few years later. The membership politely declined. No hard feelings, Faldo later returned to renovate and strengthen the Old Links, home to some of the most rumpled fairways in all of golf. When I drove them in a cart several years ago, it felt as if I were riding on bubble wrap. I bounced around in my seat like popcorn popping.

The club has spent the past few years enhancing its 7,423-yard Glashedy Links. Bunkers have been added and remodeled by original architect Pat Ruddy. The brawny brute of a links, designed by Ruddy and Tom Craddock in 1995, isn't as flat as sister Old Links. A few holes climb dunes high above the clubhouse. The 171-yard seventh hole, a rare hole on a links with a pond, has already witnessed one dramatic shot - a 'mulligan ace' by yours truly.

After a gust of wind blew my first tee shot - a pitching wedge off of the elevated tee - into the dunes, I changed clubs and my mindset for the second attempt. I took an 8-iron and hit a half-punch shot under the wind, onto the green and into the hole. I learned everything you need to know about links golf that day.

Let's hope next summer's Irish Open is as memorable. Since Rory McIlroy and his foundation have become involved with the event, the tournament has risen in stature. McIlroy's influence has kept the Irish Open in Northern Ireland twice in the past three years, having visited Royal County Down in 2015 and the Strand course at Portstewart Golf Club for the first time this year. Now that the tournament is part of the Rolex series, it could be on an extended run of links courses as venues for the foreseeable future, a blessing for links lovers everywhere.

It will be interesting to see how attendance fares with a course so far from major population centers (Dublin in Ireland and Belfast in Northern Ireland) and how many pros make the journey. Jon Rahm, who won with a record 25-under-par in 2017, has already pledged to defend his title. Between Rahm and McIlroy, that's a good start.

Yes Ireland has some of the best links courses in the world..R.Co.Down,R. Portrush,Ballybunion et al...but the best 36 hole lay out on the island is Ballyliffin...Two completely contrasting superb links courses surrounded by the most friendly people in Ireland...play them and you wont disagree..