Playing an awesome golf course is great. Playing it in competition with a friend by your side is even better.

I have always enjoyed testing my golf game in tournaments, from local events to qualifiers for national-scale championships. But some of my best competitive golf memories revolve around team play. Several years when I was growing up, my father and I had a great time teeing it up in the Father & Son Team Classic, held every July in Myrtle Beach, especially the year we won our flight after a few previous close calls.

Another highlight: playing in the very first qualifier for the very first USGA Four-Ball Championship with my friend Adam, with whom I have played hundreds of rounds since we were 10 years old. We didn't play especially well, but it was fun to share in the experience of participating in the birth of a new national championship.

If you've ever played a spirited best-ball match in your weekly foursome, you know what I'm talking about: competitive golf is a misery and a triumph that is particularly sweet when shared. PGA Tour players will remember - or discover - this truth this week as they play at the Zurich Classic of New Orleans, though the beauty of our game is that you don't need to be an elite player to have fun beating your buddies, or even a field of dozens of other teams.

That is the motivation for the recent rise in fun two-person events held at some of the best resorts in the United States. The folks in the UK have been wise to the greatness of team golf centuries longer than we Yanks have - distinguished clubs like Muirfield, Rye and many others are built around team golf, though it's often foursomes (alternate-shot) play on that side of the Atlantic.

Here in the U.S., we rugged individuals generally prefer to play our own ball, and so four-ball (or best-ball) competition reigns supreme.

Competition is becoming part of the ethos of several of America's greatest golf resorts, as they provide opportunities - some of them several times per year - to team up and play some tournament golf, often in a setting that blends the steely competition of a club championship or member-guest with the fun and socialization of a buddies trip.

This development bodes well for the game at large. Competition - even when casual in nature - binds golfers together and gives them purpose. What better incentive to work on your game than the prospect of winning an event on a memorable course?

If you want to get in on the fun, look here:

Mike Keiser's Oregon ode to the greatness of seaside golf is the consensus best destination in America for hardcore golfers. Since competition has always been part of the identity of the game in the places of its origin, it is only fitting that Bandon hosts several tournaments a year. The two-day, 72-hole Links Championship pits 60 teams - separated into 10-team flights by handicap - against one another over the Bandon Dunes, Bandon Trails, Old Macdonald and Sheep Ranch courses in late June. This year's Links Championship is sold out, but there is a waitlist in the event of withdrawals.
(Click here for events schedule) Golf bags are lined up, awaiting their turn for action at the Sand Valley Cup Sand Valley Golf Resort 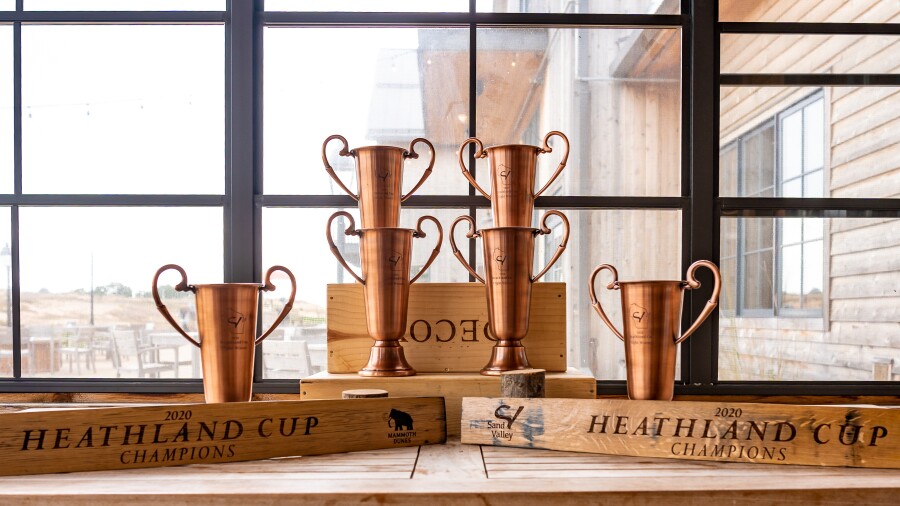 The runaway success of this central-Wisconsin resort, also developed by Mike Keiser (and run primarily by sons Michael and Chris) is evident in the fact that all three of its two-person events for 2021 are fully subscribed and taking waitlist entries only. This even includes the Heathland Cup, a 54-hole best-ball affair set for September 5-7.
(Click here for events schedule)

Typically held in March, Kiawah's annual Friendship Cup is a popular best-ball event that includes a round on the Ocean Course and another round on one of the resort's other courses. Dates for the 2022 edition have yet to be confirmed.
(Click here for 2022 event info)

The darling of central-Florida golf has a serious calendar of team-oriented golf events, highlighted by the Fall Classic which, despite a date more than six months away (October 24-27), is currently waitlist-only. For now, there are still spots available in the Holiday Cup December 11-13. June's Family Cup, held over Father's Day weekend, presents another competitive opportunity.
(Click here for events schedule)

The Ryder Cup's Team Europe and Team USA are far from the only golfers who will compete over Kohler's four exciting Pete Dye designs this year. The resort bookends the year with series of tournament in April and October. Information about October's Kohler Fall Challenge (October 23-24 or October 30-31) will be revealed in the resort's September email newsletter.
(Click here for events schedule)

This sprawling community and resort an hour east of Atlanta has an annual two-person team event, the Reynolds Cup, with a business tie-in: each team is represented by a particular company, and the event functions as part-tournament, part-professional networking opportunity. The 2021 edition takes place September 13-15.
(Click here for event information)

Three events - on May 31, July 31 and August 31 this year - called "The Dual" grant a rare opportunity to two-golfer teams at this Northern Michigan resort: the chance to play both forms of Tom Doak's innovative, reversible Loop course in one day.
(Click here for events schedule)

Well within reach of most American golfers, this vaunted Dominican Republic resort hosts an impressive slate of events throughout the year, including its annual Twosome Championship, which will be played for the 16th time November 29 through December 5, 2021.
(Click here for events schedule)

In recent years, destination marketing organization Myrtle Beach Golf Holiday has stepped up its events game in a big way, running a host of tournaments in addition to its uber-popular World Amateur in late August. Two-person events include the 54-hole Myrtle Beach Preseason Classic, typically held in early February, and the Short Par 4 Fall Classic, which will take place November 14-18, 2021. Both events sample the upper-echelon Grand Strand golf courses, from Caledonia and True Blue in the south to Barefoot Resort up in North Myrtle Beach. Other team events include the Veterans Classic, held every May.
(Click here for events schedule)

Troon manages hundreds of golf courses and clubs around the world, and their annual Troon Golf Challenge brings together hundreds of two-person teams in the spirit of competition each year. Nearly 40 qualifiers, from New York to Florida to California, will determine the field that will compete December 11 and 12 at Whirlwind Golf Club and Ak-Chin Southern Dunes Golf Club in Arizona for the overall titles.
(Click here for more information about the Troon Challenge)

Ever played in a four-ball event at a notable resort or course? Share your memories in the comments below!