Located just outside of Tacoma and less than an hour from Seattle, Chambers Bay sits along the shores of the Puget Sound. The golf course has a rugged and beautiful landscape that features a quarry with roots that date back to the Steilacoom Indian Tribe and the first European settlers in 1832. The layout was inspired by the classic links golf courses of Scotland and Ireland. Robert Trent Jones II designed the course. His challenging links design makes you feel as though you've been transported to the British Isles, even down to the seaside locale. The golf course tumbles across windswept sand dunes with native fescue grass lining the fairways. Wind is also an ever-present challenge on this wide-open layout. Chambers Bay has been a local favorite since opening and it is considered one of the finest golf courses in Washington.

The 19th Hole is Great For:
19th Hole Scenic Views 13
Drinks 9
Patio Dining 8
Course Challenges Include:
Elevation Changes 22
Undulating Greens 22
Bunkers 19
This course/club is great for:
A Bucket list/Top 100 Pick 18
Advanced Golfers 17
Wildlife/ Scenic Views 17
This Course's Location is:
Worth the Drive 11
In the 'Burbs 7
Convenient to the City 6

Couldnt have had a more perfect weather day. Views, sunshine, good friend. Course was in good shape , nice to have the ball roll in the winter in Washington. Greens were ok....thought they had all been redone but it didnt seem like it. Worker told us they roll the green every other day. They were rolling pretty true.

Pace of play is unacceptable. 2:20 tee time went off on schedule. 5 hours and 20 minutes later we finished 18 in the dark with 3 groups behind us. Very personable staff made no effective effort to improve pace of play. One even told us one day last week had 6 hr 20 minute rounds. Tees, fairways and waste and trap areas in good condition. Greens contained two types of grass that caused a lack of consistency in speed and break from green to green. Greens less than average for any public course. Over the last couple years have booked Carne, Sligo (Rosses Point), Rossapena and Strandhill through Golf Now . All are better Courses' ,better examples of links golf and in better condition at this time of year. They are also less than half the price of this course and never over 4 hours walking and usually closer to 3 hours. Chambers Bay should make some changes.

Lives up to its US Open reputation

Pretty, tough and worth every penny. Will come back for sure.

Chambers bay is a destination course and as such I expected to pay a decent price to play (and, of course, I did). What was a little disturbing (and led to the lower than usual pace of play and value ratings) was taking over 5 hours to play a round that started in the 8:00 hour. I worry about what later starting times must be like.

Having put the negatives behind us, Chambers is a terrific links(ish) golf course that has plenty of challenge for those looking for it, but I found quite playable for myself and probably people of a wide variety of skill levels (provided they play the right tees).

The course eases you out with a very gettable par 5 (that I butchered by topping my drive less than 125 yards into the scrub) and a attackable par 4 second, which I birdied with just 3w/8i. Quite frankly I may have shot a better score had I hit fewer driver's off the tee's and used 3w or even 4i. The roll out is great and driver often took me into more narrow and better protected landing areas.

I imagine it's hard to play here and avoid sand altogether, and I found it my fair share of times. The good news is I found it very playable and didn't lose many strokes to bunkers (although I definitely lost one to the trap in the middle of the 18th fairway, which I hit while trying to lay up short of it). I found the placement of the bunkers terrific from both a cosmetic as well and enhancement of play standpoint.

As for my golf, my best hole was probably 10 - mostly from the standpoint of extraditing myself from a fairway bunker (the weakest shot in my game) - and saving par. I had one Birdie on the day, a fairly ho-hum GIR/1-putt on #2 and putting, in general, prevented what could have been a nicer score. I had about 8 more putts than my average, the greens are for real, be sure to roll a few before you start.

I'm very glad I played this course and would recommend it to any big golf fan at least once. Based on pace and cost, I'm not sure how many times I'll play it again, but that has nothing to do with the quality of the golf itself, which was great. My service experience was very good as well from the clubhouse through the on course experience. I didn't take a caddie, but my playing partners did, and he was great as well.

I have played a few famous links in Ireland and UK. Chambers bay is among the top compared to those. Each hole is very unique and the view of puget sound at twilight is unbeatable. I love that there are multiple ways to play each hole depends on the pin positions. The green is a bit slower than I expected but rolls the ball well and true.

I realize Chambers Bay isn't in everybody's wheelhouse - the walking, man-made dunes and difficulty. Even so, it's a personal favorite. This despite the fact that it doesn't always fit my game.

I think I've double bogeyed the uphill 7th and narrow par-5 8th high above the bottom of the bowl each of the now four times I've played here. It's an unrelenting challenge, but it's so darn beautiful and interesting.

This is my first time seeing the new greens. They were solid and much improved from the days of temporary greens when I last played here 8-9 years ago before the 2015 U.S. Open. When you catch Chambers Bay on a sunny day as I did, it's as good a walk as there is in resort golf.

I’m surprised this isn’t named after the Ladinberger Family. A family of politicians and judges that created a course using public funds the average citizen in the County can’t afford to play on. Next the pros who played it, in televised play, were mainly censored in their comments about how much the course sucks.
It doesn’t overlooks an unspoiled view of Puget Sound. The view is spoiled and the trains make a racket!
I’m sorry but the only analogy I find appropriate for this king of courses is that the Emperor has no clothes.
I apologize to all the great caddies who put lipstick on the pig!

Nothing like a day at Chambers Bay. Overcast day with a breeze still stunning. Wonderful course. Wonderful people. Still my favorite course i have ever played.

Obviously its just a walking course but maybe should not stack tee times so bad to where its teeing off 10-15 minutes late and playing 5 hours and 15 minutes. Finish 2 holes in the dark after paying 100$ is pretty rough.

Greens were bad this round

12 noon round on a dry December day. Tough, challenging yet fair. Course was in fantastic shape.

Definitely one of the longest walks I've made in Golf and worth every step. I would recommend the trip to play this gem and enjoy every second of it.

Played second of twilight tee time at 3:10. Initially saw a threatening rain shadow across the harbor so I was expecting the worst (or, Scottish weather). But, the rain faded and worked out to be a beautiful day. I would highly recommend a good pair of walking shoes for this course as it is a billy goat track. The course condition was excellent. The course is very challenging with elevation changes and undulating greens. It is very easy to three putt here. But, this was a very memorable round. A true bucket list.

ericfromthe206
Played On 05/29/2020
Reviews 5
Skill Advanced
Plays Once a week
I Recommend This Course
5.0
Previously Played
Conditions Excellent
Value Excellent
Layout Excellent
Friendliness Excellent
Pace Good
Amenities Good
Comment
1 2 3 4 Next
Business Tools for Golf Course Operators
Add a GolfPass ratings badge to your website
Get a feed with the latest reviews for this course
Nearby Courses 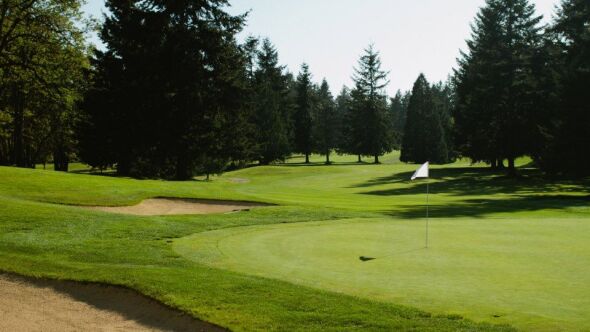 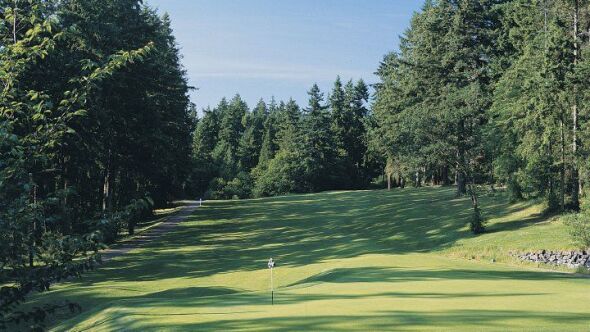 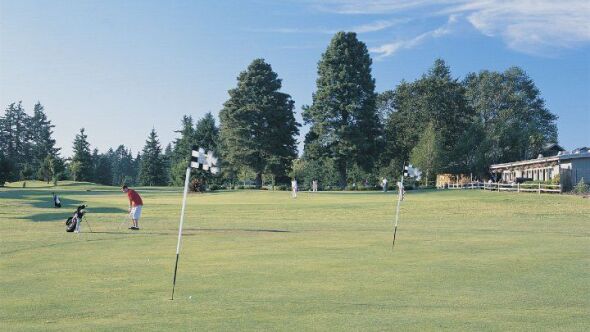 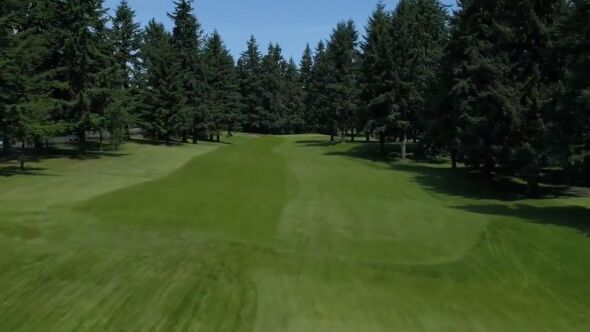 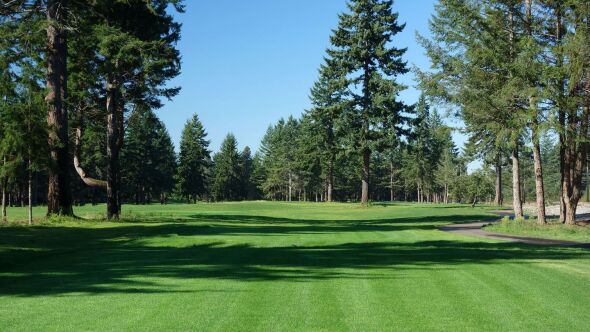 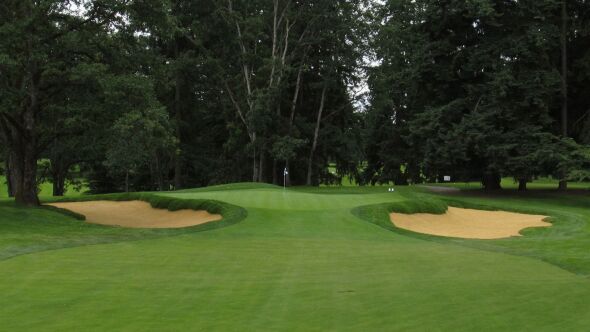 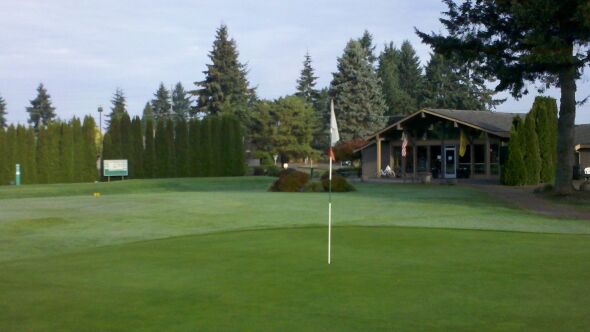 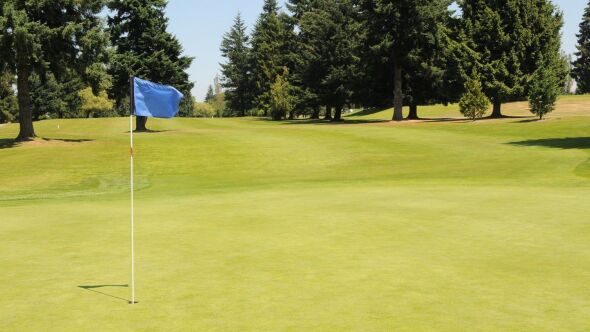 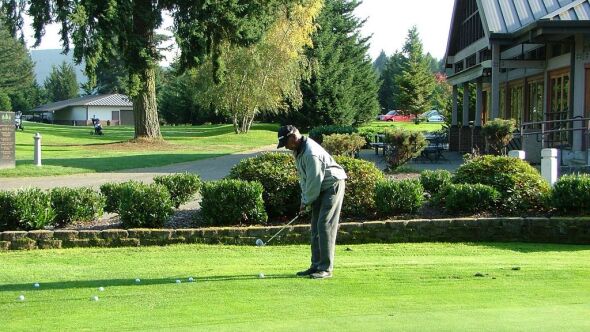 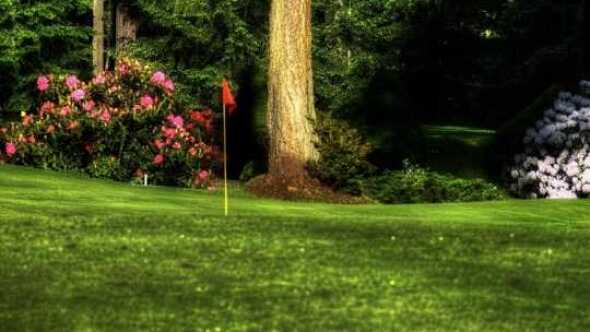 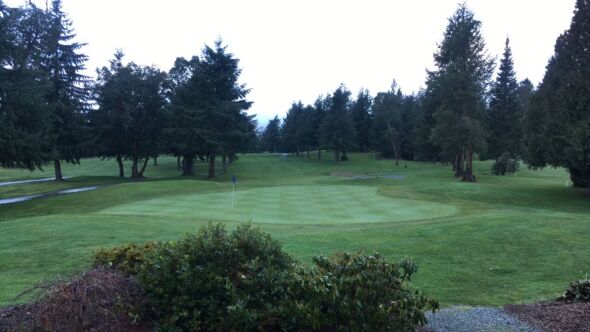 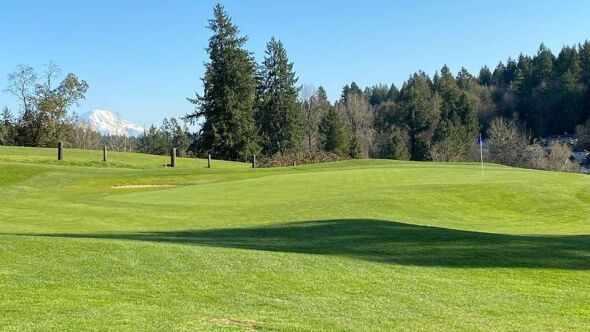 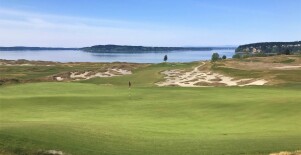 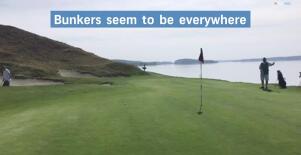 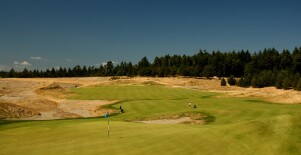 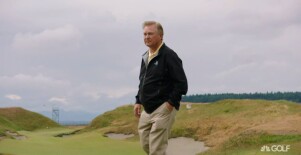 Video
From rocks to riches: The Chambers Bay story

From rocks to riches: The Chambers Bay story
13:26 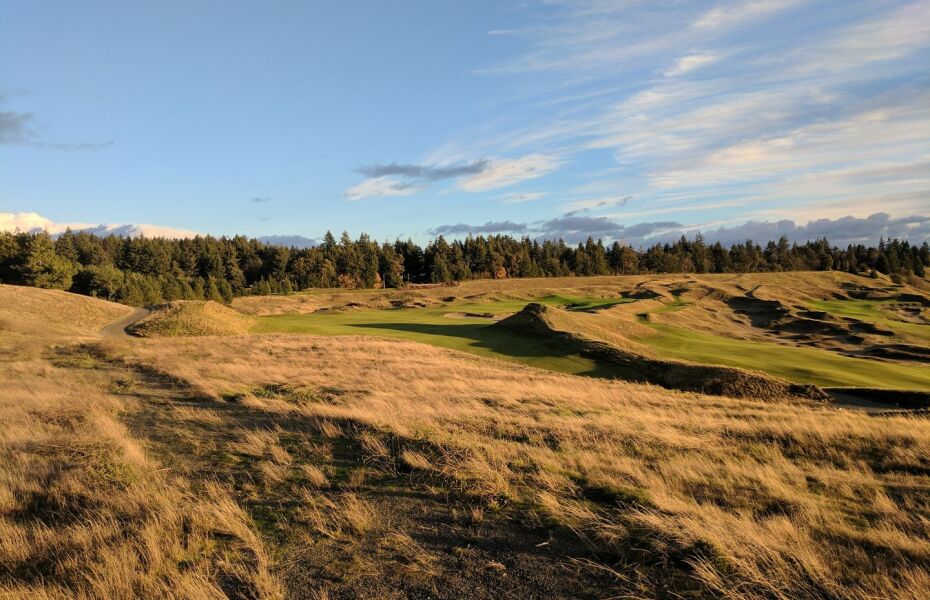 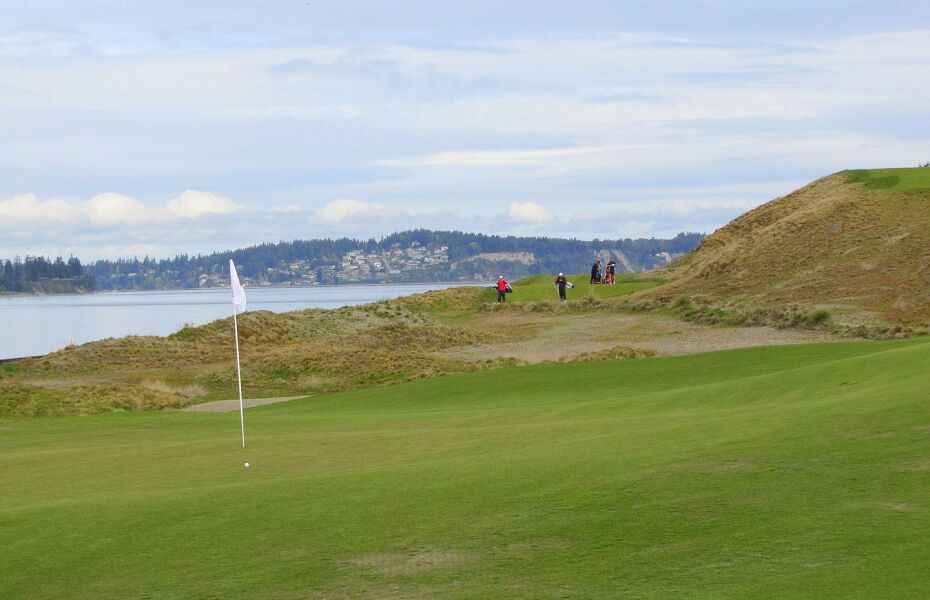 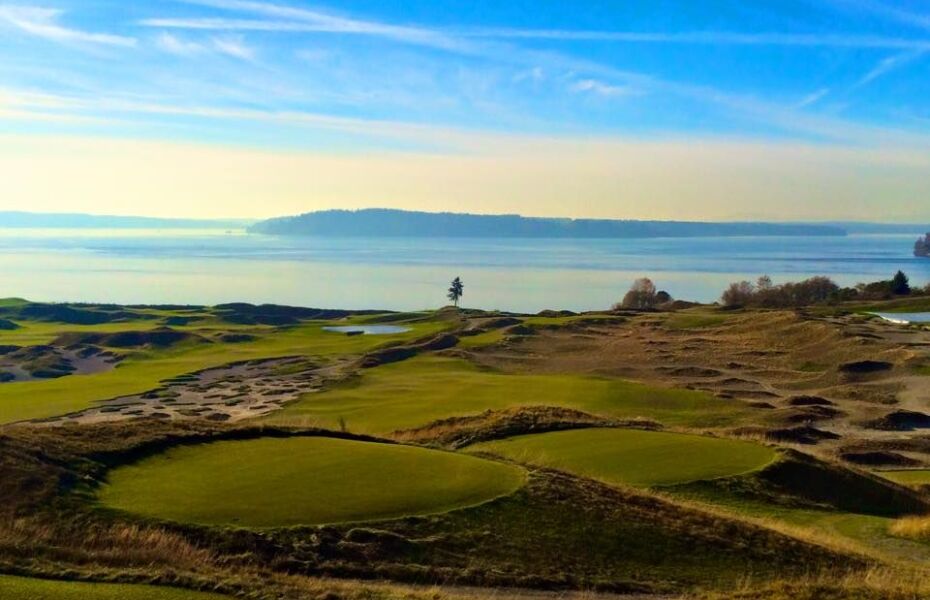 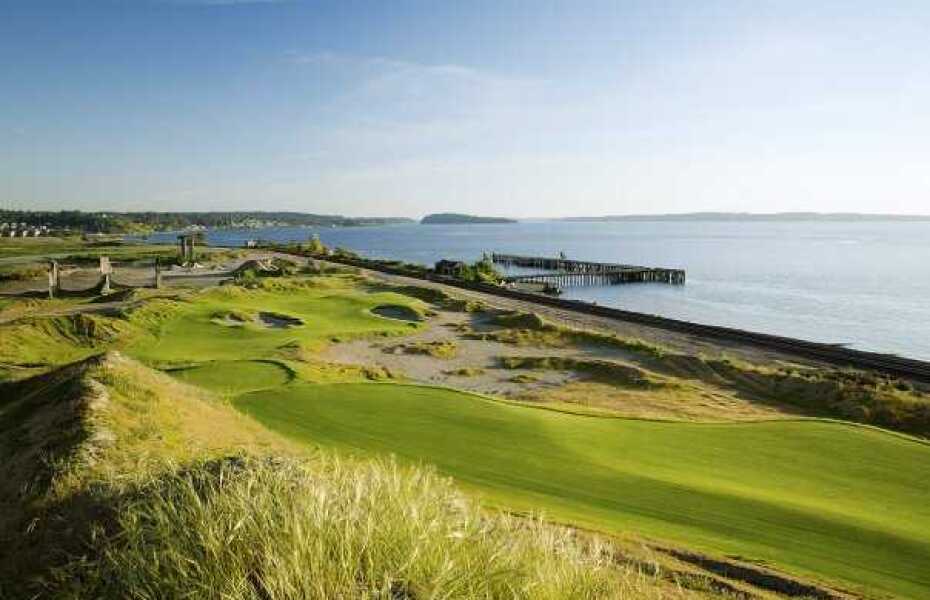 All the greens at Chambers Bay are being changed from fine fescue grass to poa annua. Aidan Bradley 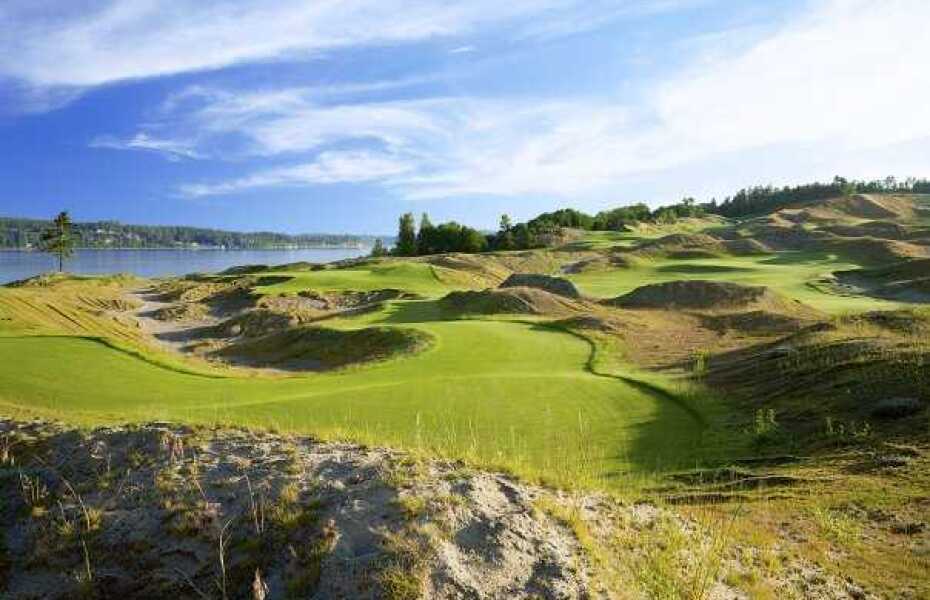