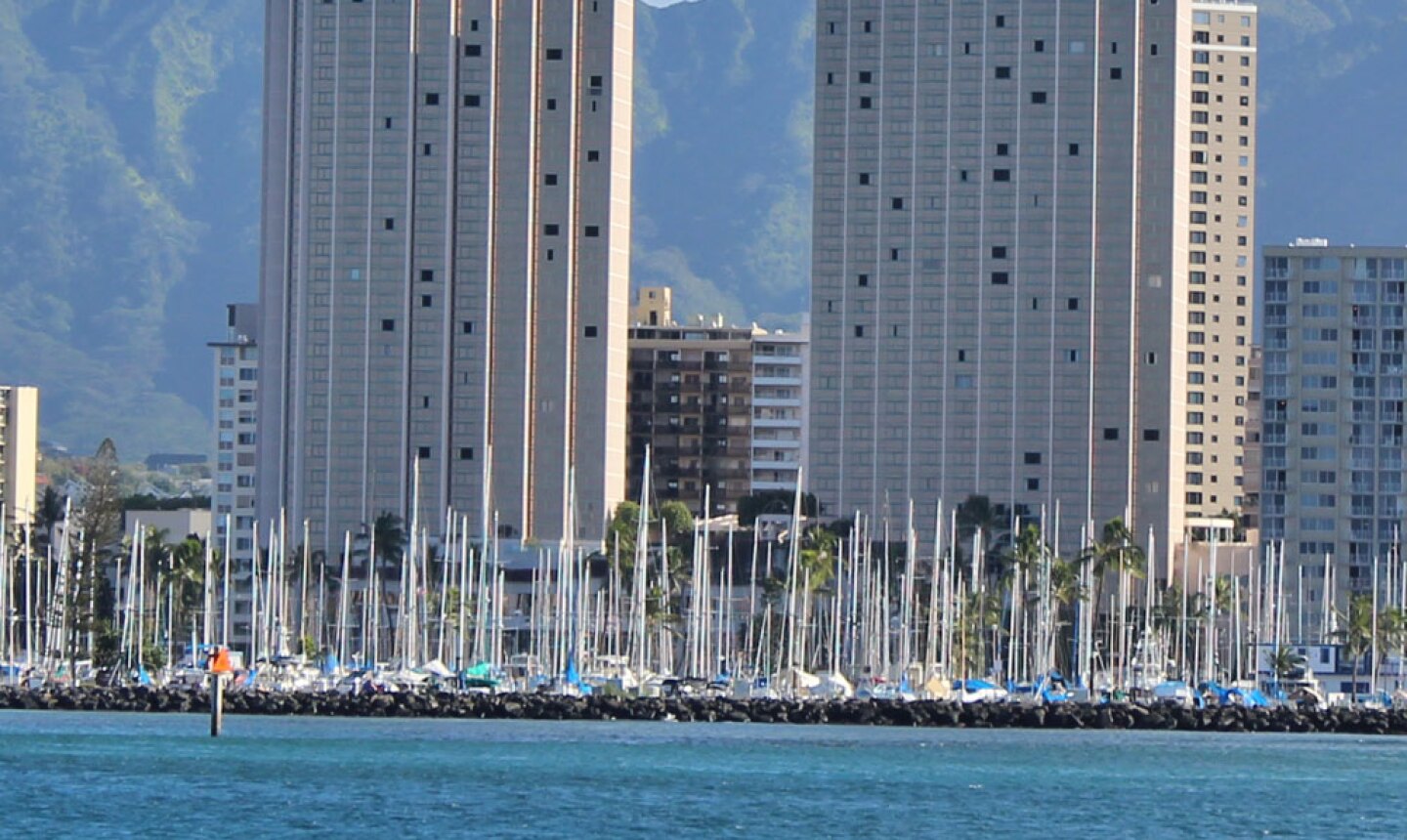 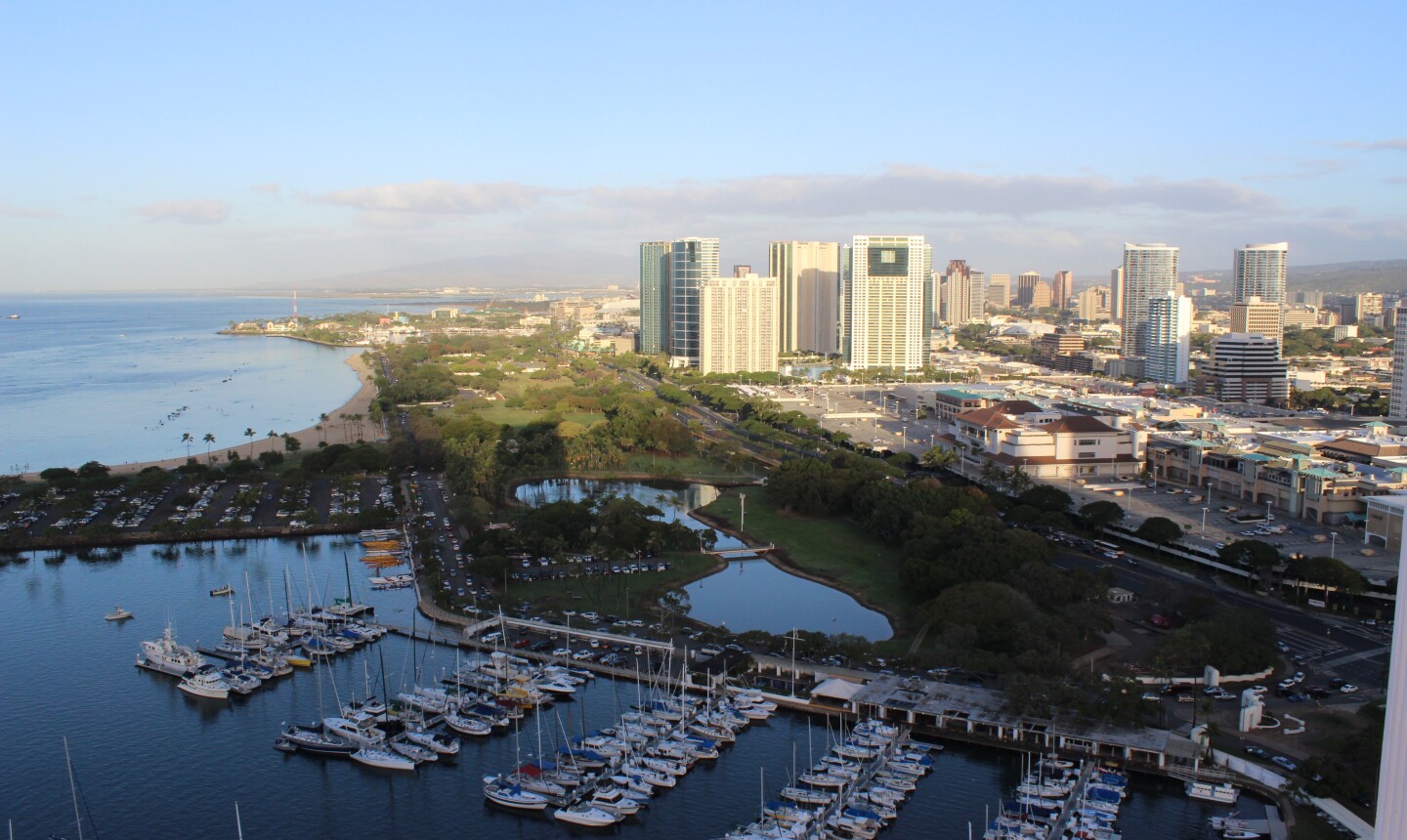 The views from the upper floors of the Hawaii Prince Hotel Waikiki are striking. Jason Scott Deegan/Golf Advisor 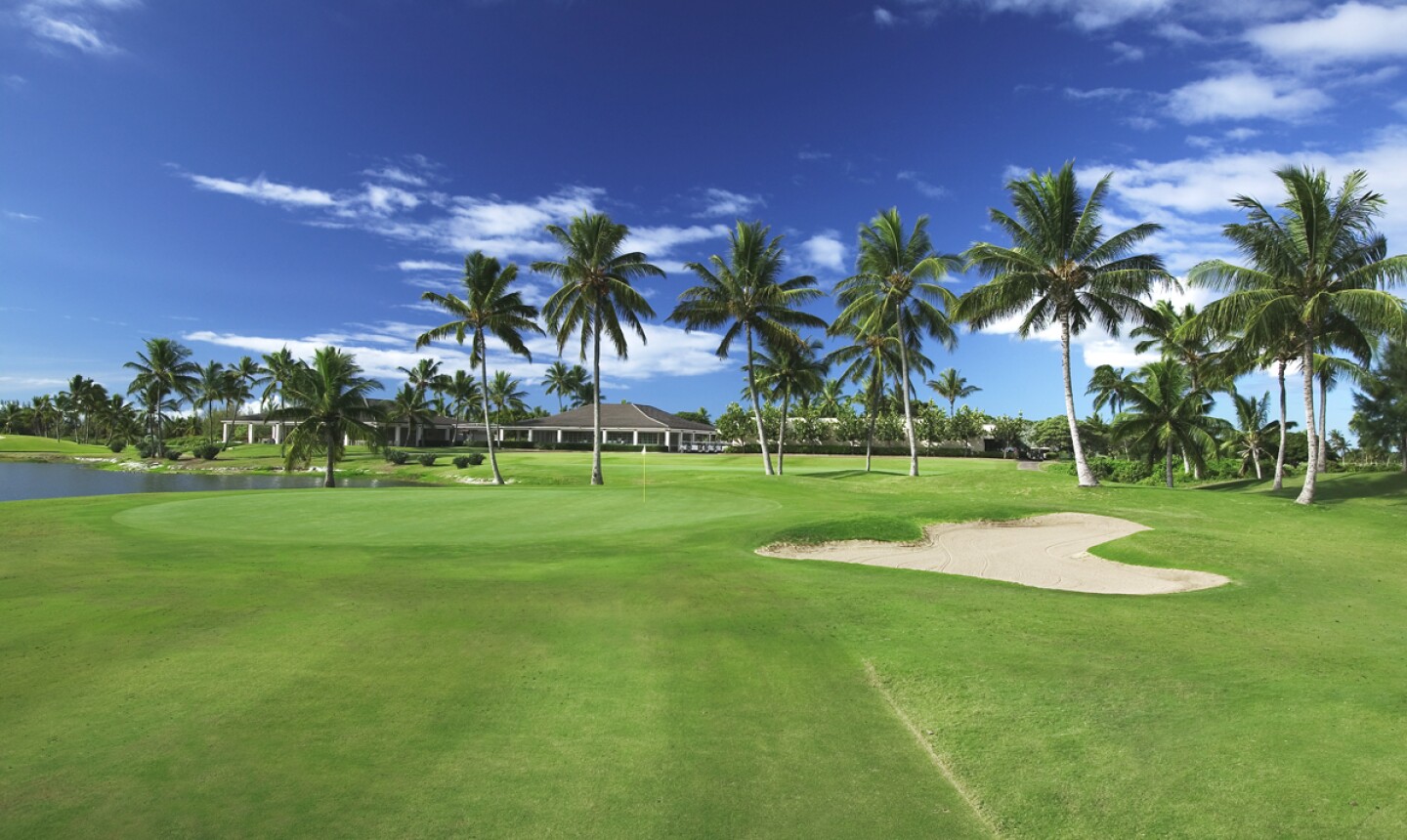 The seafood buffet at the Prince Court restaurant of the Hawaii Prince Hotel Waikiki attracts a crowd at dinner. Jason Scott Deegan/Golf Advisor

It might be the only golf resort in the world where there's no green grass in sight. No green grass for chipping. No green tee boxes to stick a peg into. No greens for putting.

Walk out the front door, there's nothing but concrete and the sailboats docked at the Ala Wai Yacht Harbor. Out the back door is a major Honolulu thoroughfare, leading in one direction to Oahu's largest shopping center, the Ala Moana, and in the other to the urban sprawl of restaurants, shops and other resort hotels in Honolulu's Waikiki tourist district.

The resort's course, the 27-holeHawaii Prince Golf Club, sits like an outcast 40 minutes away in Ewa Beach. While that's not exactly convenient, golfers still love this place. Just ask Mike Powell, who visited from Chicago in January. He and his wife had a prime view of the Friday night Waikiki fireworks from their room.

"It would be nice if the course was right here, but it does not bother me," he said. "It's a trade off because you are right here downtown. My wife likes to walk to the beach and have the night light (of Waikiki). It's a tradeoff."

The Hawaii Prince Hotel Waikiki was the last hotel built on the Waikiki beach in 1992.

The two towers feature nice rooms and suites, all facing the Pacific Ocean. The view is almost as good in the elevator ride up -- the two elevators face inland toward the tall buildings -- as it is from the rooms. The higher floors boast the best scenery, especially at night when the urban lights come alive.

A new program called the Ilima Club offers members access to upgraded rooms on the 31st floor and an exclusive fifth-floor lounge with a concierge, who serves continental breakfast, afternoon snacks and non-alcoholic drinks.

The new Reef Lounge, a bar transformed from an old retail shop, is the best part of a warm and spacious lobby. Up the escalators is the hotel's Prince Court. The restaurant serves a fabulous buffet three times a day, capping it off with a popular seafood bonanza for dinner.

It's also very convenient to stroll about the city to explore the restaurants and shops. A free shuttle transports guests to the heart of Waikiki beach every half hour.

Those looking to avoid the beach crowds can relax at the rooftop pool and hot tub, located on the fifth floor between the two towers, overlooking the marina.

Secure indoor parking is right next door (valet is also available). Powell said the people are just as good as the facilities. “The staff is very friendly,” he said.

A complimentary shuttle transports guests between the two. The club continues to be well received for its playability and conditioning. Each nine is a little bit different.

The "A" loop is the easiest, where palm trees line wide landing areas. The fairway corridors significantly shrink on the "B" nine, choked by a thick layer of more traditional trees. Two demanding par 4s highlight this stretch. Ponds add drama to seven holes on the "C" nine.

Ewa Beach is one of the sunniest spots on the island but also prone to heavy trade winds. Scoring remains tough when the breeze kicks up, which happens mid-morning essentially every day. Dozens of top young Asian players, many who aspire to be on the LPGA Tour, train here.

"Compared to all the other courses on the island, this is one of the best manicured," said Justin Neal, who lives nearby. "It is a course easy enough to enjoy with shorter par 4s. You still have to think out there. I love that it's 27 holes. It is like playing a different course each time out. (Rotating the nines) keeps it fresh.