Kiawah Island: A luxurious golf playground on the coast of South Carolina 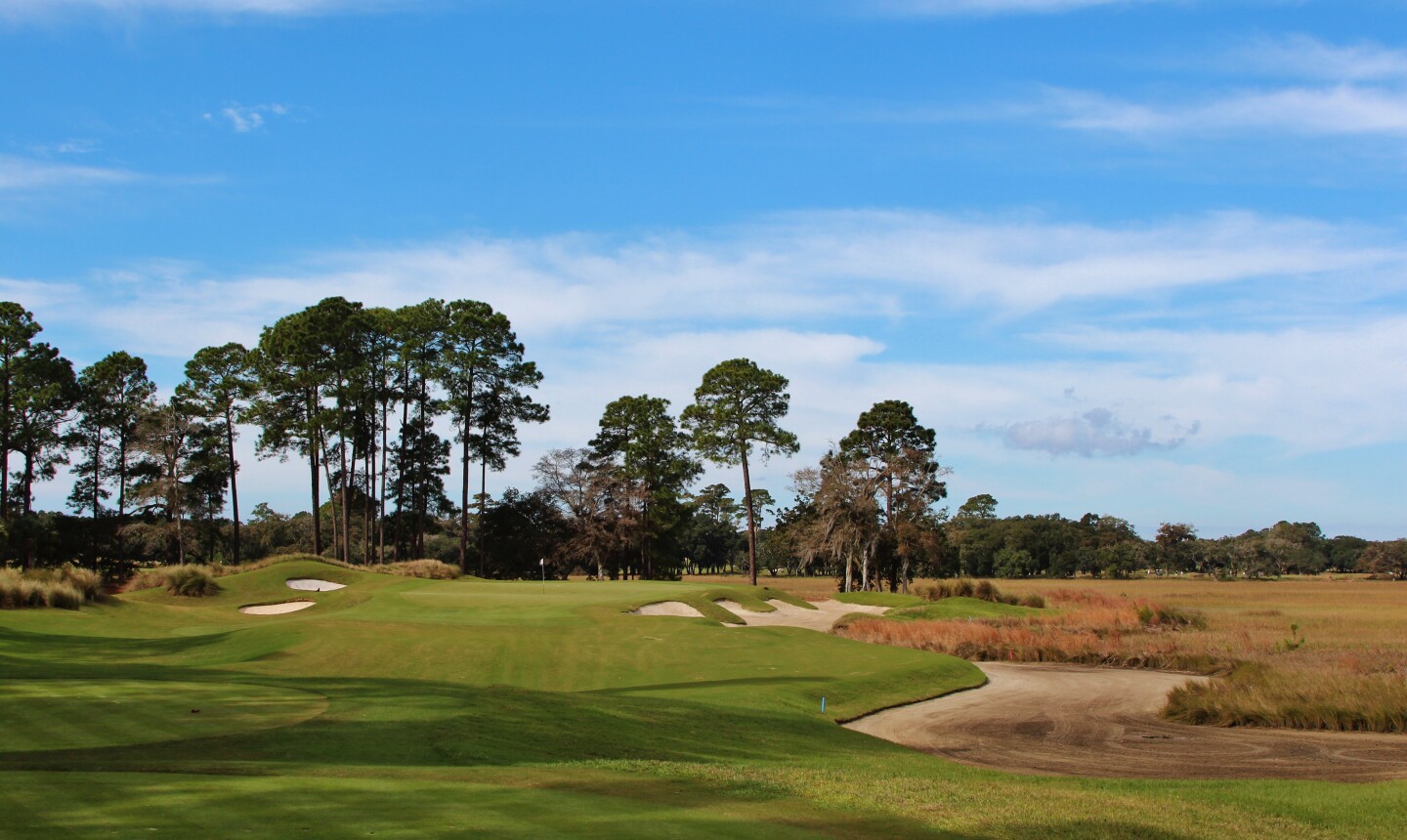 The par-3 16th hole on the Cassique golf course at the Kiawah Island Club has a slick green with a severe slope in its midsection. Jason Scott Deegan/Golf Advisor The par-3 17th hole is the most scenic spot on the River Course at the Kiawah Island Club. Jason Scott Deegan/Golf Advisor 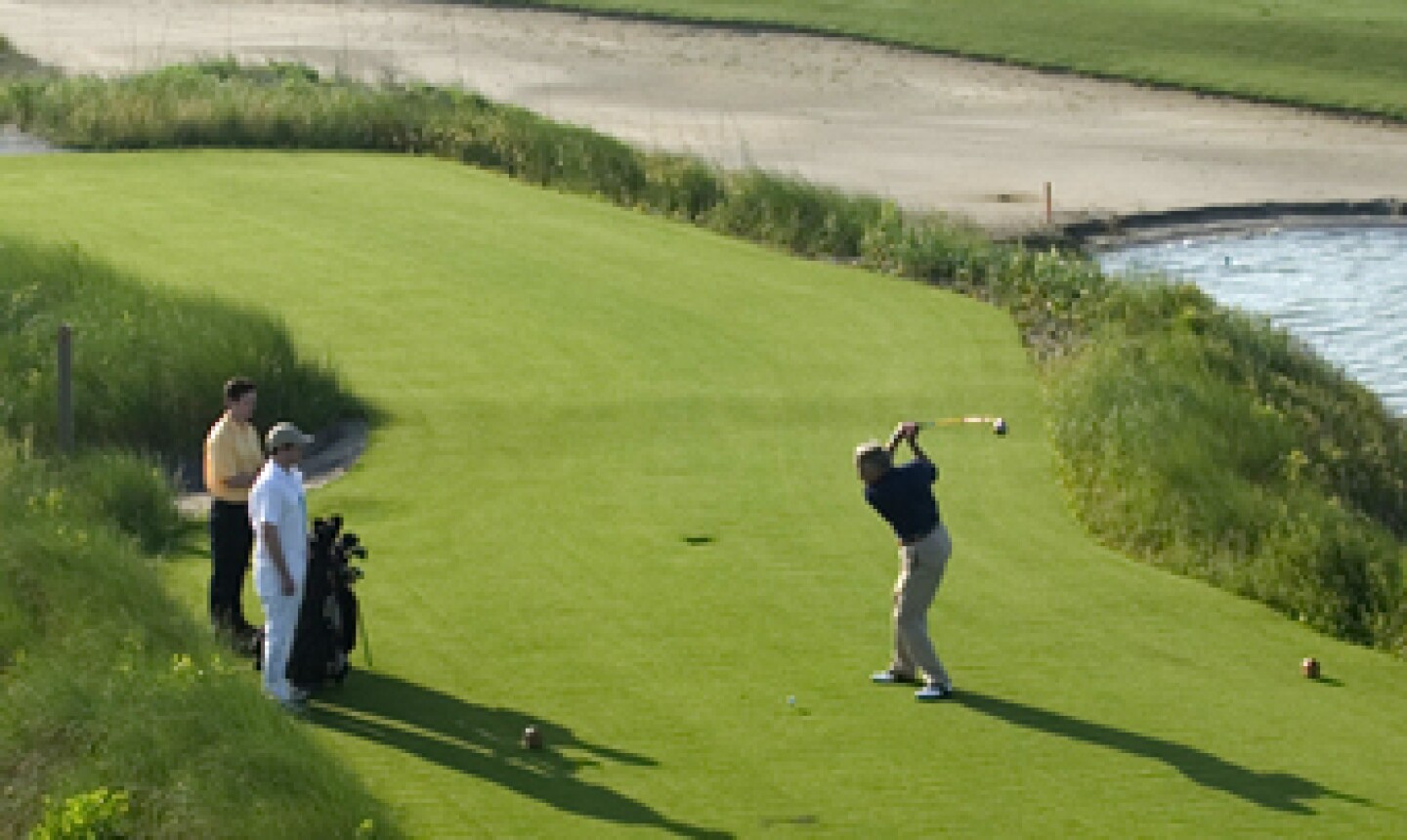 KIAWAH ISLAND, S.C. -- Once you cross that bridge, something happens.

When the Kiawah Island Parkway crosses the Kiawah River, life takes on a different feel -- like Scotty has beamed you to some sort of paradise, where golfers roam and beachgoers chillax and everything looks a little nicer, a little cleaner, a little prettier than any vacation of the past.

Since 1988, this barrier island 25 miles south of Charleston, S.C., has blossomed into a coveted address that attracts people from around the world. It's got golf name brand recognition on par with Pebble Beach and Pinehurst. It's a haven for athletes, celebrities and CEO types who want to escape from their hectic lives, either for a week on vacation or on a regular basis when they buy a second (or third) home.

The 1991 Ryder Cup on the resort's famed Ocean Course essentially put Kiawah Island on the map, and the 2012 and 2021 PGA Championships will keep it there. The course remains one of the most memorable walks in the game, providing a tour of Pete Dye's maniacal mind along the Atlantic. The Kiawah Island Club's River Course and Cassique Course, are almost equally epic.

Development on the island has been highly regulated to ensure the tranquil natural beauty is never disturbed. Kiawah's 1976 Master Plan called for 7,000 residential properties, according to KiawahIsland.com, but Kiawah Partners reduced that cap to about 5,600 in its 1994 development agreement with the Town of Kiawah Island. Hopefully, 100 years from now people will still be riding bikes on secluded paths and kayaking through the peaceful tidal marshes.

Inside The Kiawah Island Club

Both the River and Cassique Courses offer amazing clubhouses built to blend into their natural surroundings. For example, the men's locker room at the River clubhouse boasts a TV nearly the size of most movie theaters.

The 7,039-yard River Course, established in 1995, recently underwent a million-dollar renovation to update its bunkers, add new forward tees for women and higher handicaps and improve the greens. A comfort station was built, so players can grab a quick snack of free food and a drink. These updates show the commitment of the new owners, South Street Partners, which bought Kiawah Partners in 2013.

Architect Tom Fazio routed six holes along the Kiawah River's edge. Other fairways and greens are sculpted through picturesque marsh savannas, ponds and maritime forests. It's a scenic test that's quite difficult. PGA Tour professionals Ben Martin and Russell Henley, who belong to the club, played in an exhibition to celebrate the grand reopening last fall.

A photo posted by Jason Scott Deegan (@jasondeegangolfadvisor) on Dec 1, 2015 at 4:41pm PST

The Sasanqua Spa sits right next door. The stroll up the spa's wooden plank walkway overlooking the marshy river's edge sets the mood for hours of relaxation and serenity that take place inside.

Cassique is truly unique, inside and out. The Pub, upstairs in the clubhouse, transforms nightly into a lively hangout that serves excellent food.

Tom Watson's first solo design, Cassique has a linksy feel characterized by wild mounding and bunkering. The severely sloping ninth green is quite maddening, yet ingenious. Holes 4-6 can be reconfigured into three different loops -- named Nip-N-Tuck, Pulpit and Due East -- depending on the day. Members won't tire of play Cassique because of its flexibility.

Caddies (or forecaddies) accompany every group at both the River and Cassique Courses, making for a special day of golf. With a full social calendar, a beach club home to three swimming pools, a sports pavilion and other first-class amenities, membership in The Kiawah Club does have its privileges. All it takes is a major investment -- buying or building a house with Kiawah Island Real Estate -- to join.

Inside the Kiawah Island Golf Resort

If there's such a thing as an east coast equivalent to Pebble Beach Resorts, Kiawah Island Golf Resort is it. The Ocean Course is just as compelling as Pebble Beach Golf Links in scenery and shot-making. The Sanctuary, a 255-room seaside mansion built in 2004 after a decade of careful planning, intertwines intimately with the beach, something the Lodge at Pebble Beach can't say.

The first floor was raised 20 feet to provide unobstructed views of the lapping surf, a concept Dye used in building the Ocean Course. Two grand staircases and a wall mural of a marsh anchor its grand public spaces upon entering. Every piece of furniture and painting and curtain is a work of art.

I've stayed in both The Sanctuary and a nearby villa. They're each great for different reasons. The villas offer more space and privacy, a perfect combination for large groups and families. Couples will probably be most comfortable at The Sanctuary. They can walk down to the beach, the spa or dine at The Ocean Room, a signature steakhouse or Jasmine Porch.

Shuttles handle transportation to the golf courses. Playing all five probably isn't necessary on one trip. Oak Point, a Clyde Johnston design, used to be the odd-course out on a lot of itineraries because of its location on the opposite side of the Kiawah River, but a recent renovation has made the course more appealing, especially its improved turf conditions. The Kodak moments come at the ninth and 18th holes along the Haulover Creek and the river.

Turtle Point, without a doubt the resort's second-best course, is closed for a nine-month renovation being spearheaded by original architect Jack Nicklaus. It is scheduled to reopen in October 2016. I haven't played Cougar Point by Gary Player or Osprey Point by Tom Fazio, but both have gotten at least one five-star review on Golf Advisor. Osprey Point has vastly improved since a renovation completed in 2014 covered the course in Paspalum Platinum grass and added some new forward tees, among other nip and tucks.

The best way to enjoy the Ocean Course is to make a day of it. Go early and stay late. I could hang out for hours on the putting green near the shore. When my back grew tired, I'd park myself on the Adirondack chairs near the 18th green and watch groups play in.

I'm not sure what is the tougher obstacle -- waste bunkers along certain fairways or the plateau greens that are so tough to hit and hold. Don't let your score or performance dictate your mood. Just enjoy the sights not many golfers get to see. Charging up to $370, the Ocean Course is one of the most expensive tee times in golf. Caddies (or forecaddies) are required, so don't forget to bring cash for tips.

Most people lounge in the Ryder Cup Bar for a few drinks after golf and head into the Atlantic Room for dinner. At sunset, everybody gathers outside to celebrate the moment.

Both of my visits to Kiawah Island have been mad dashes from tee time to tee time. That's a shame considering how laidback the Lowcountry lifestyle can be. I still haven't had time to experience the famous oyster roast/barbeque at Mingo Point or swim in the ocean or go kayaking. I must find a way to return again. Kiawah Island is that special of a place.

Kira K. Dixon
Lifestyle Correspondent
Now Reading
Kiawah Island: A luxurious golf playground on the coast of South Carolina
New Cookie Policy
WE AND OUR PARTNERS USE COOKIES ON THIS SITE TO IMPROVE OUR SERVICE, PERFORM ANALYTICS, PERSONALIZE ADVERTISING, MEASURE ADVERTISING PERFORMANCE, AND REMEMBER WEBSITE PREFERENCES. BY USING THE SITE, YOU CONSENT TO THESE COOKIES. FOR MORE INFORMATION ON COOKIES INCLUDING HOW TO MANAGE YOUR CONSENT VISIT OUR COOKIE POLICY.
CONTINUE
Search Near Me