More than a pit stop near Pinehurst: Fayetteville, North Carolina offers its own brand of excellent golf 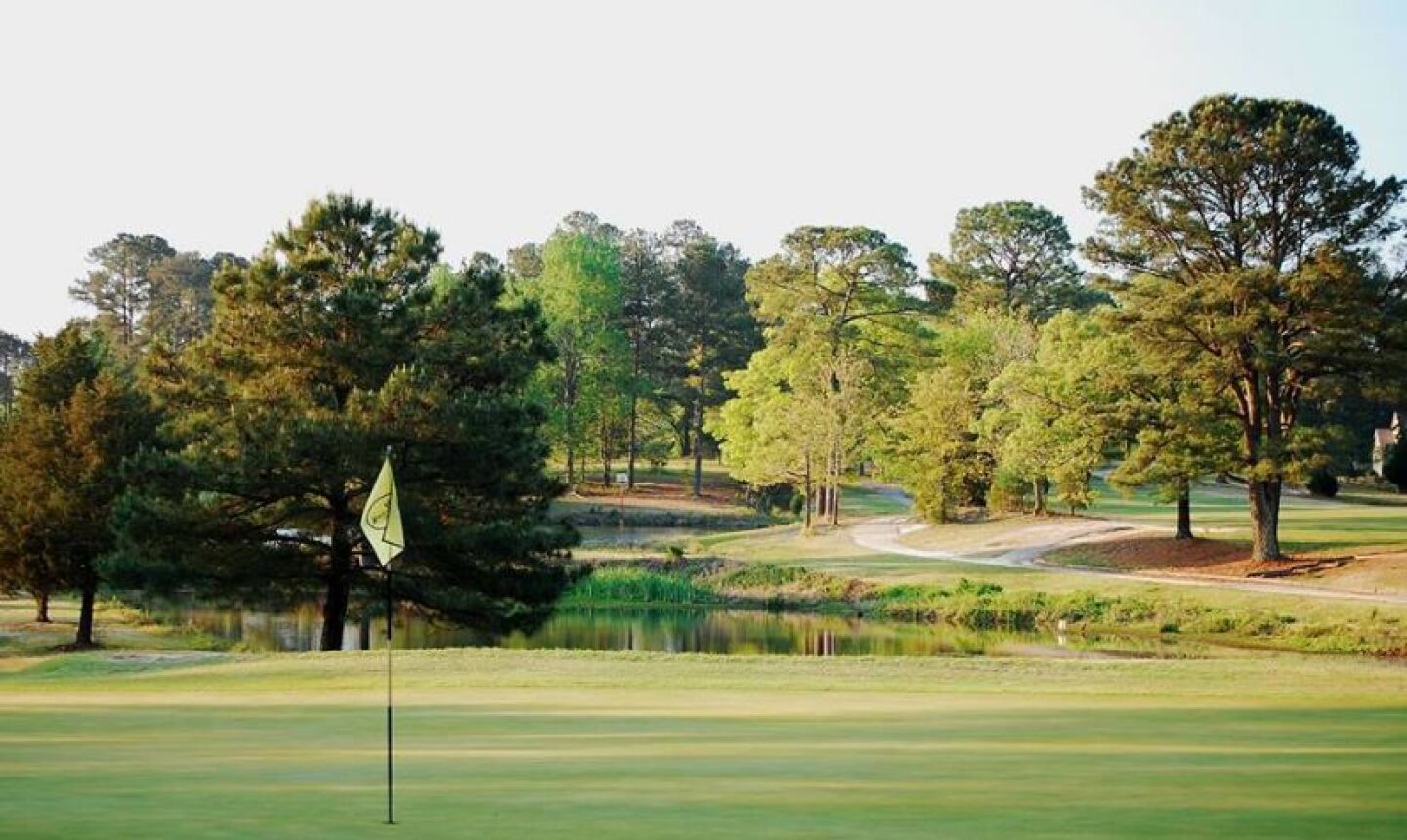 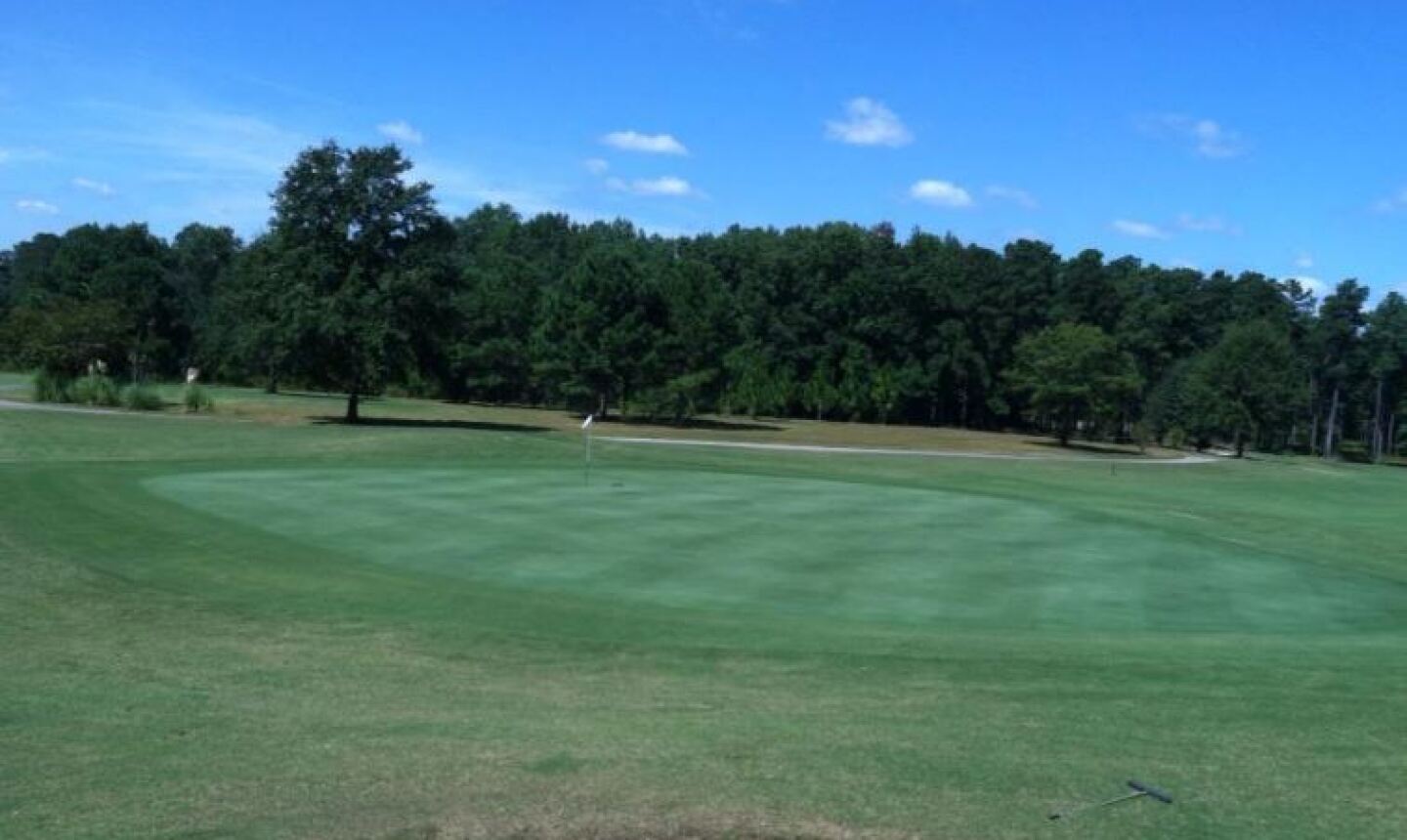 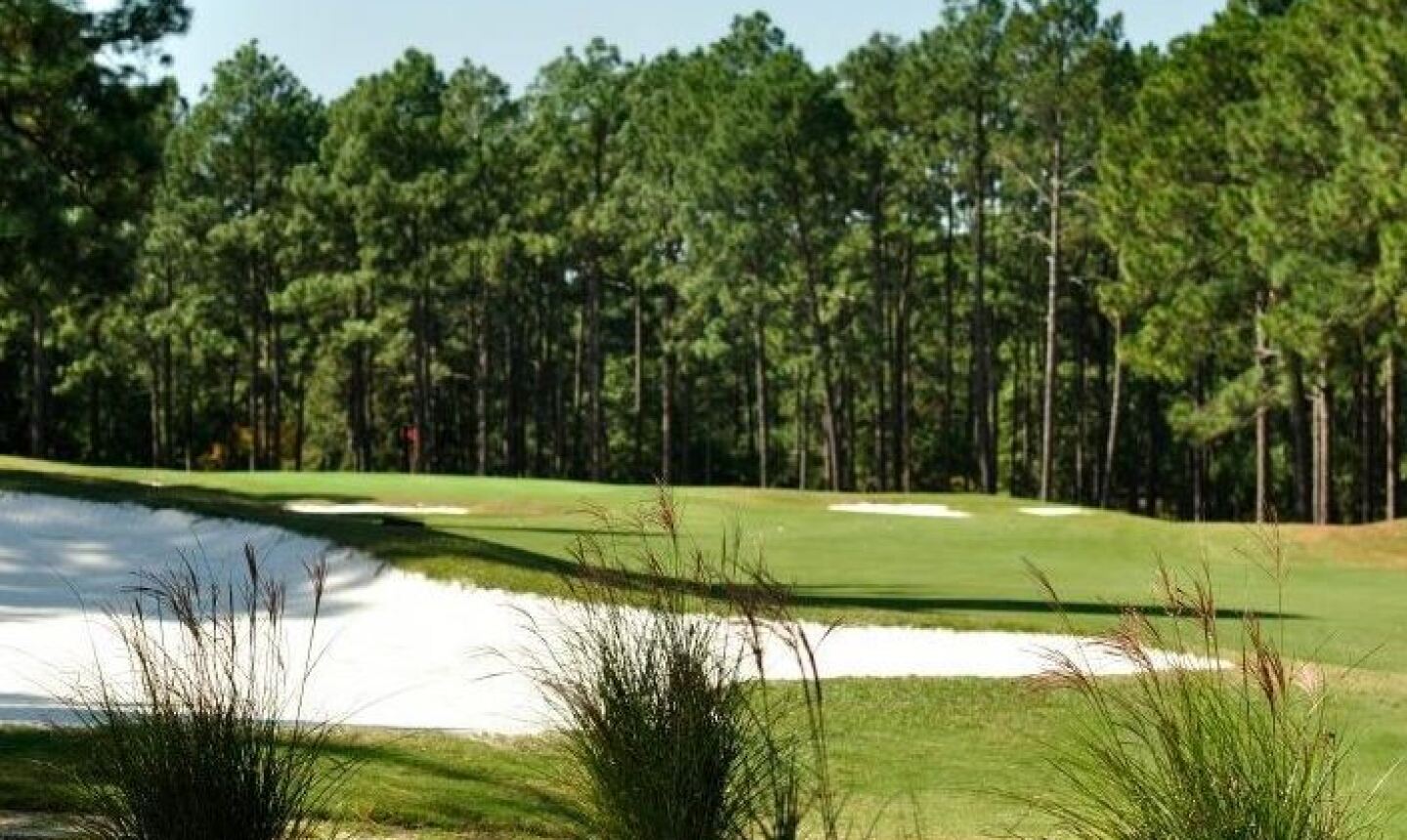 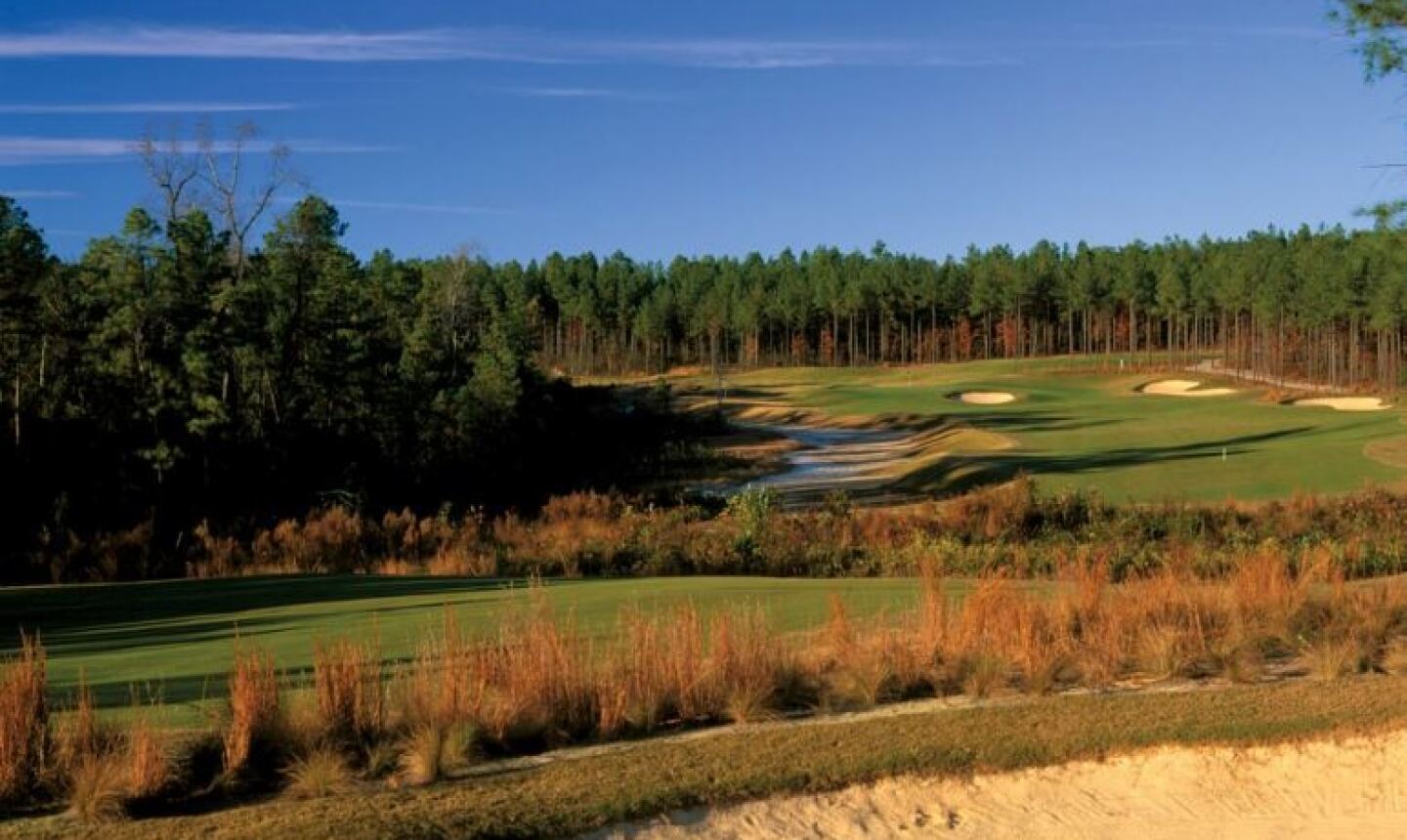 FAYETTEVILLE, N.C. -- Golfers know all about Fayetteville. After all, it's where you turn off I-95 to head east to Myrtle Beach or west to Pinehurst.

But there are places for golfers to stop in Fayetteville aside from the Kangaroo Express and the IGA. Four outstanding courses make Fayetteville a golf destination in itself.

Here's a quick look at each.

It wasn't long ago that retired club professional L.B. Floyd was a clubhouse fixture at Cypress Lakes Golf Course. Floyd, the father of four-time major champion Ray Floyd and LPGA player Marlene Floyd, was instrumental in the opening of Cypress Lakes in 1968 after teaching the game to his kids as pro at nearby Fort Bragg.

Opening as a public facility, Cypress Lakes was a novel idea in these parts, where the only courses to be found were private. More than 40 years later, Cypress Lakes remains the granddaddy of Fayetteville's public golf scene and, thanks to renovation, one of the area's top courses.

The former turkey farm is full of tree-lined holes that place a premium on accurate tee shots. There is significant elevation change. The fairways of some of the best holes, such as no. 10, fall and then rise, giving players a clear view of what they face.

Two par-3 holes on the front nine -- no. 6 and no. 9 -- play over Cypress-filled Rainey Pond. The signature ninth is the most photographed -- and perhaps most intimidating -- hole on the course with a 180-yard carry over water to a long, narrow green fronted by bunkers.

What players might appreciate most about Cypress Lakes G.C., however, is the unhurried, countrified feel rarely found on a track of this quality. Credit Head Professional Robert Wilson for setting the tone, making players feel welcome the moment they step into the clubhouse.

Approaching Bayonet at Puppy Creek, players might think they've made a wrong turn into a sod farm as they pass acres of perfectly manicured Bermuda grass, some of it rolled up and awaiting transport. But there is no need to turn around. Bayonet is owned by Carolina Turf Farms, Inc.

The flat land at its entrance gives little indication of the fabulous piece of property on which Bayonet is built. The golf course crisscrosses Puppy Creek, traversing rugged woodlands and open fields, rising and falling, with no two holes alike. This is the eastern edge of the Sandhills, where a bounty of excellent courses reside.

Owned by a turf company, fine fairway conditions are guaranteed. The bentgrass greens are stellar as well. The course measures 7,069 yards from the back tees, but with wide fairways and many downhill holes, the emphasis is on playability.

Located 15 minutes west of Fayetteville, Bayonet is in the most remote location of the four Fayetteville gems, but it is worth the extra mile.

The highlights of the Willard Byrd design are the par-3 holes. Purists don't generally approve of par 3s that play uphill to partially obscured greens. But it's hard to quibble with the dramatic look of no. 9, a 184-yarder carved into the side of a hill with a daunting bunker complex.

Bayonet at Puppy Creek isn't Willard Byrd's only design in the Fayetteville area. He also created Gates Four Golf & Country Club, which serves as the centerpiece of a bustling housing development.

After opening as a private course in 1967, Gates Four has undergone lots of change including flipping the nines and two waves of renovation.

Under the direction of General Manager Kevin Lavertu and Superintendent Wayne O'Neal in recent years, Gates Four has found its stride. The most compelling evidence of their work are the immaculate bentgrass greens, which roll fast and true. The conditions are such that Gates Four has attracted a new Hooters Tour event, the All-American Golf Championship, which will debut in July 2014.

With many twisting, tree-lined fairways, raised greens and gnarly Bermuda rough, the course demands accuracy, playing longer than its 6,895 yards from the back tees.

The most intimidating hole is no. 12, a 419-yard par-four which appears much longer and tougher from the back tee, where players consider a 210-yard carry over a lake to a narrow fairway, then an approach over another water hazard to a narrow, crowned green.

Those familiar with the playing style of long-hitting Davis Love won't be surprised by the first course he designed in his home state. At Anderson Creek Golf Club everything is big -- the rolling fairways, the sprawling, undulating greens and the monstrous, deep bunkers.

The premium at 7,215-yard Anderson Creek is on length. This is a Pinehurst-like test in that accuracy off the tee is not nearly as vital as from the fairway. Being on the correct side of the hole is crucial on the severely sloped greens, as every putt seems to break more than expected.

If anyone was tempted to think that Anderson Creek wasn't quite as long as its reputation, there is a brutal one-two punch -- holes no. 16 and 17. At 489 and 476 yards respectively, these are the two longest par 4s on the course, and they often play into the prevailing wind.

No. 16 is a trek across rolling property. If the conditions are wet, forget about getting there in two. No. 17 plays to a downhill fairway but then severely uphill to a green protected by one of the deepest greenside bunkers at Anderson Creek.

This is a big-boy course, built exquisitely in the image and likeness of Love. In 2001, NC Magazine agreed, naming Anderson Creek the state's "best new course. 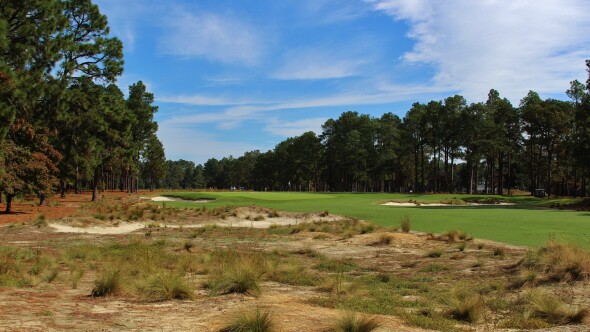 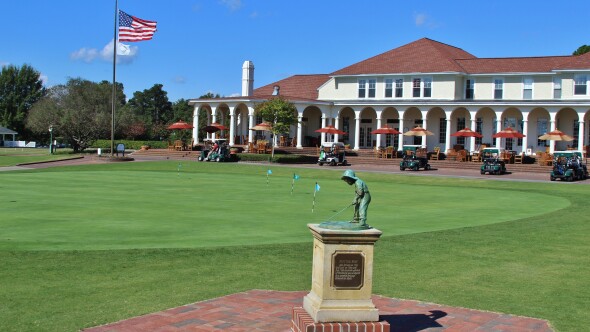 Galleries
Pinehurst Resort & Country Club: A historic Carolina gem in pictures
Pinehurst Resort & C.C. is so in tune with its history, it's almost as if this iconic North Carolina golf resort lives in a time warp. Every move toward the future is made with a nod to the past, as the modern touches have seamlessly been introduced without disturbing the fabric of the resort. Pinehurst is a 2,000-acre tribute to Americana, and it will always be the holiest of grounds for those who worship the game of golf.
14 Images

Tim Gavrich
Senior Writer
Now Reading
More than a pit stop near Pinehurst: Fayetteville, North Carolina offers its own brand of excellent golf
Search Near Me