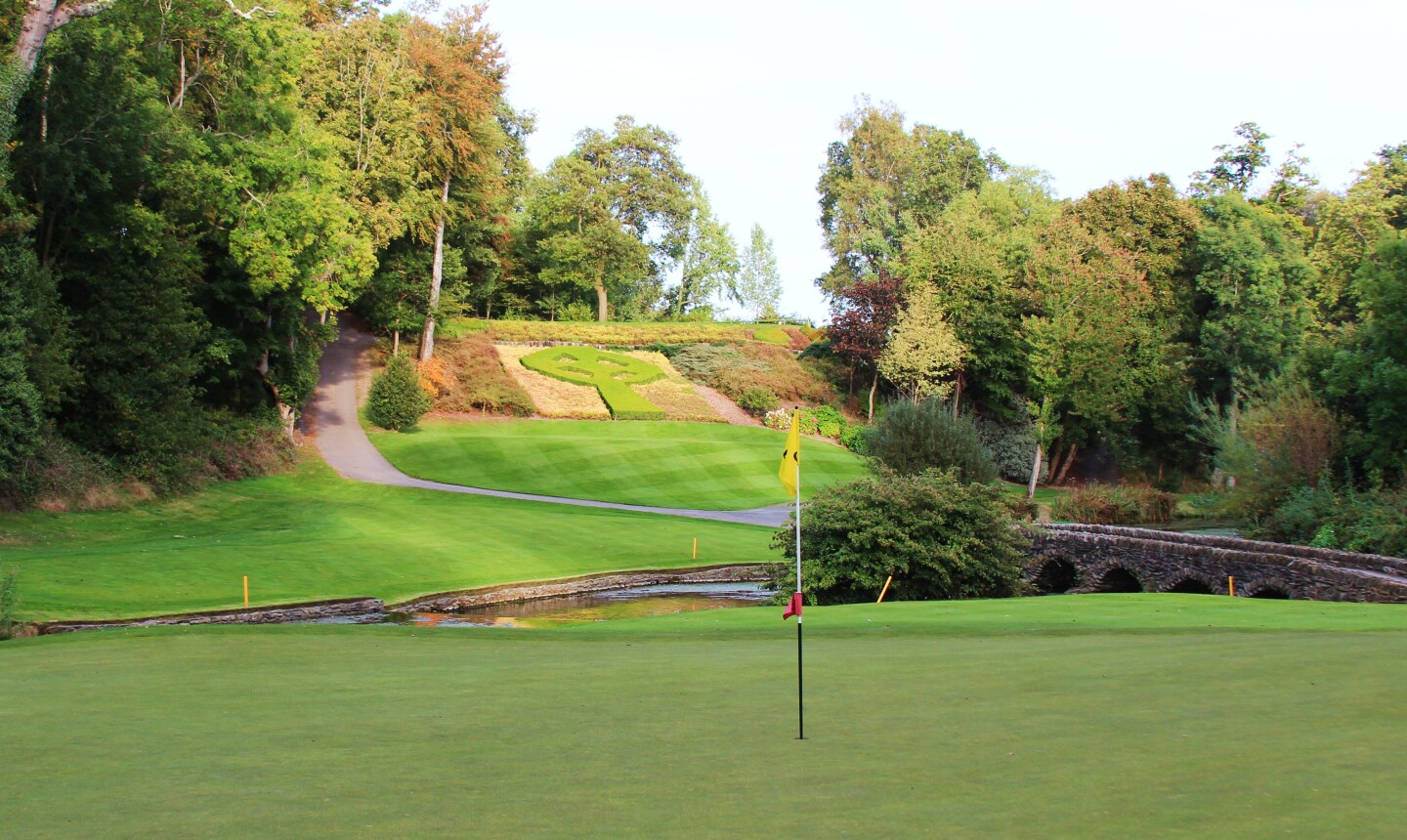 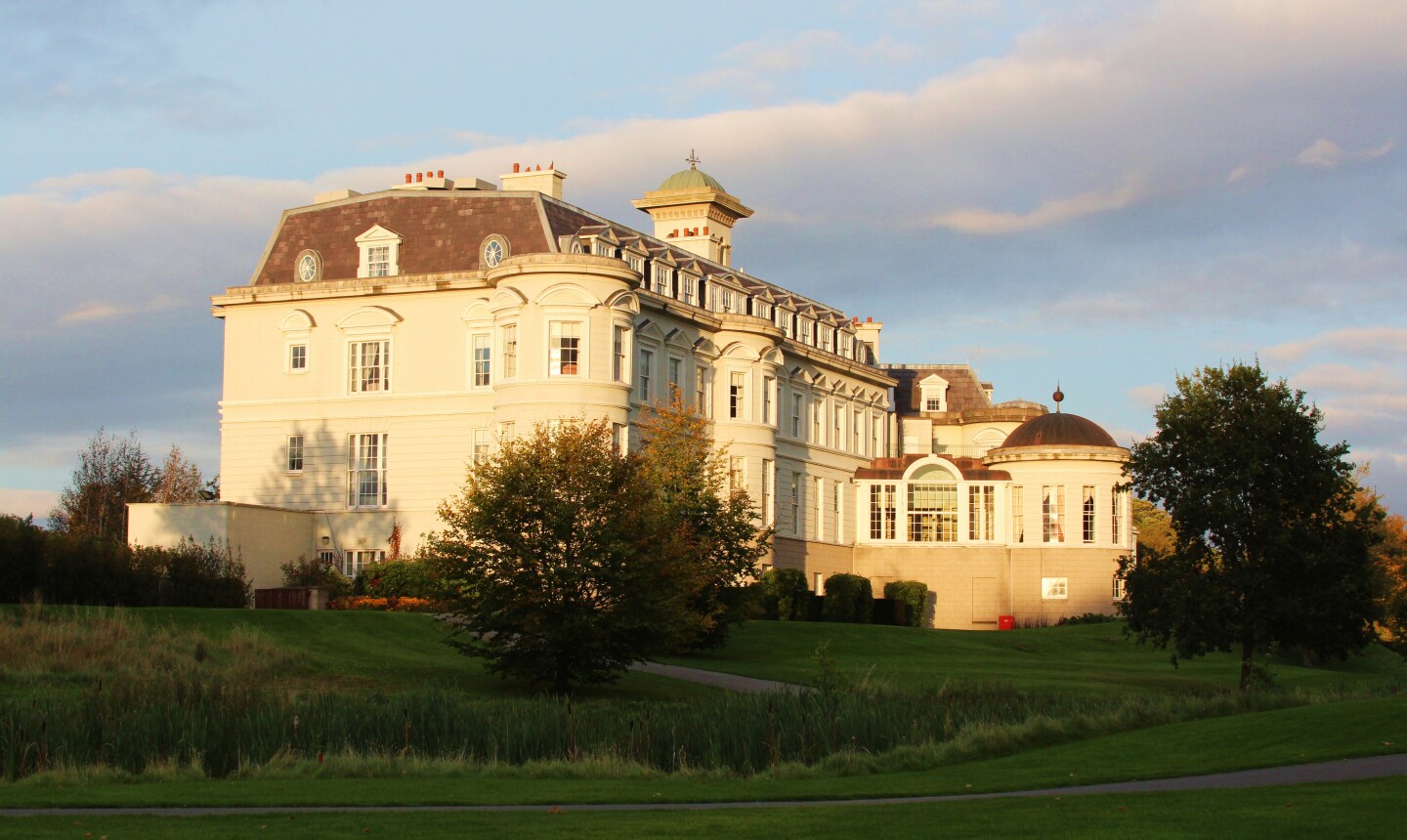 The Kildare Hotel, the elegant resort of the K Club, shimmers in the setting sun. Jason Scott Deegan/GolfAdvisor 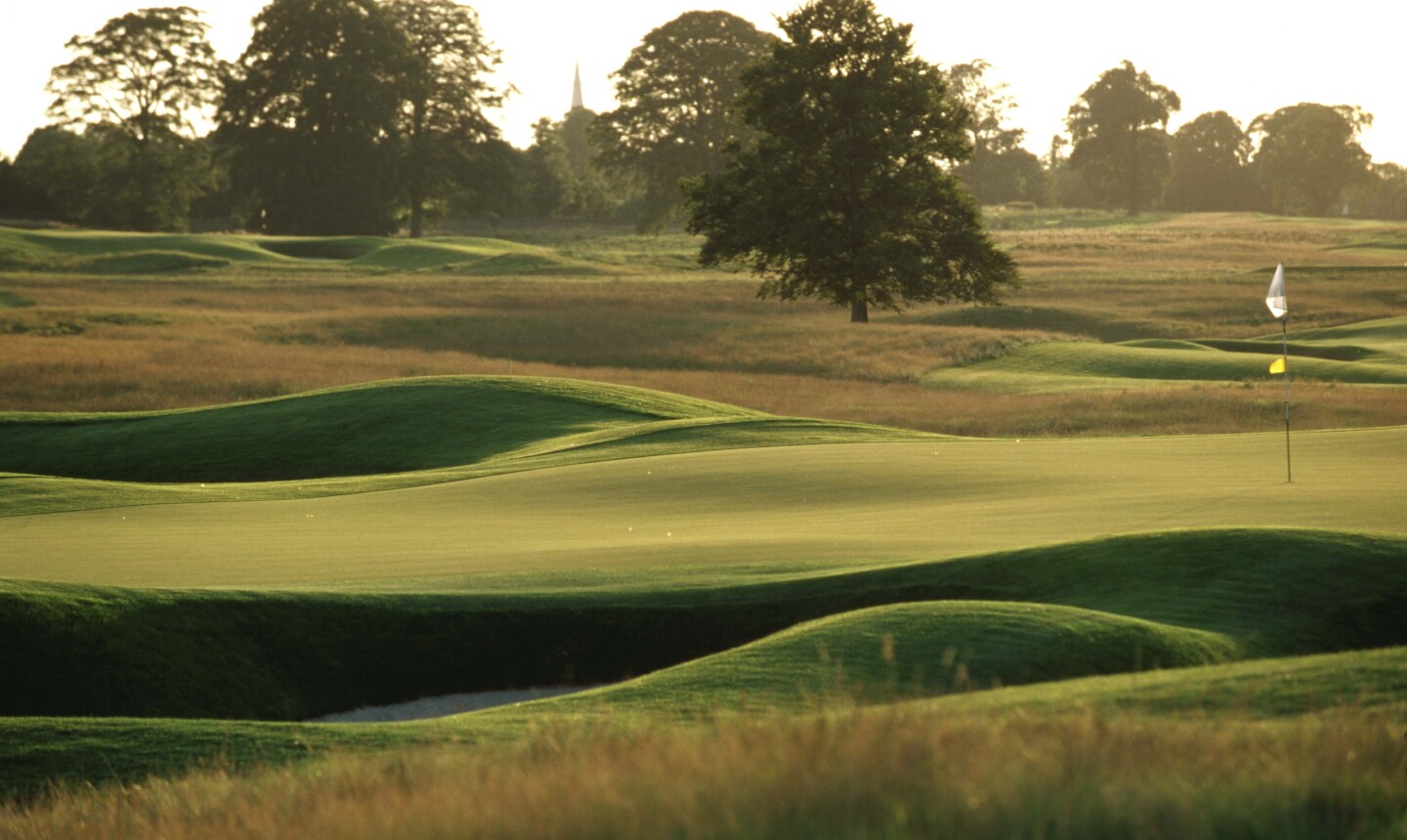 The 11th hole on the Montgomerie Course at Carton House Golf Club has 11 bunkers. Courtesy of Carton House

Parkland golf in Ireland gets such a bad rap.

Links golf steals the show when Americans cross the pond. But it's probably wise to sprinkle in a parkland course into your group's overseas itinerary now and then just to mix things up a bit.

Here are 10 to consider on your next trip to the Emerald Isle:

The Palmer Course at the K Club, County Kildare

The River Liffey created much of the drama when the 7,350-yard course hosted the 2006 Ryder Cup 30 minutes from Dublin. Matches often turned at the three holes along the Liffey. The river isolates the narrow green from the fairway at the 570-yard 16th hole, demanding precision on the second or third shot. The shape of the fairway and river creates the "Half Moon" curves of the short and tight par-4 17th hole. A lake and four bunkers pinch the 18th green. Overall, water comes into play on 14 holes, including every par 3. Irish golfer Gary McCluskey considers it a treat to walk these hallowed grounds. "It is a challenging course, but it can be forgiving," he said. "There is not deep rough, but it gets progressively harder. It is still respected and revered. It still has the same aura of the Ryder Cup."

Mount Juliet Golf Club, set within a 1,500-acre estate southwest of Dublin, reigns as the most revered championship parkland venue in Ireland. This Jack Nicklaus design hosted the 2002 and 2004 WGC American Express Championships, the Irish Open from 1993-95 and a Shell's Wonderful World of Golf match between Tom Watson and Fred Couples in 1998. From the moment golfers step into the 18th century mansion that serves as a clubhouse to the final putt on the well-protected 18th green, playing Mount Juliet will be a special experience.

The 7,453-yard Adare Golf Club opened in 1995, ranking as the last major project of Robert Trent Jones Sr. (Don't confuse it with the nearby Adare Manor Golf Club). This 230 acres of lush Irish countryside just southwest of Limerick, about a 45-minute drive from the Shannon Airport, centers around two significant water hazards, a 14-acre lake on the front nine and the River Maigue on the back nine. The stunning Neo-Gothic manor house comes into full view regularly during the round. Adare has hosted the Irish Open in 2007 and 2008 and the JP McManus Invitational Pro Am, the largest charity tournament in golf. Held every five years, the event attracted 13 of the 15 highest-ranked players in the world in 2010.

"People always talk about the K Club as the best parkland course, because it hosted the 2006 Ryder Cup," said Gary Howie, the club's head professional. "[But] there are stronger holes here, all around. There are 16 or 17 tough holes."

Druids Glen Golf Course, designed by Irishman Pat Ruddy and Tom Craddock, began hosting Irish Opens almost as soon as it opened in 1995 about 45 minutes south of Dublin. Colin Montgomerie won the Irish Opens in 1996 and 1997. A teenage Sergio Garcia won his first pro event on the 7,046-yard, par-71 course in 1999. Druids Glen has been praised as the "Augusta National of Europe" for its immaculate playing conditions and well-kept flora and fauna. They don't call this region the "Garden of Ireland" for nothing. An island green at the par-3 17th and a cascading waterfall and stream at the 18th green complete the round. "It's been one picturesque spot after another," said Nick Ivemy, a golfer visiting from Great Britain.

Paul Casey survived this dangerous minefield littered with 130 cavernous bunkers to win the 2013 Irish Open at Carton House. The 7,301-yard Montgomerie Course layout isn't as beautiful as Carton House's O'Meara Course, but it does force golfers to man up. Carton House Director of Golf Francis Howley estimates the Monty plays a couple shots harder than the O'Meara. That seems appropriate considering that Monty has always been a bit more cantankerous as a personality.

"The more you play [the course], the better you can plot your way around," Howley said. "First timers get caught in some bunkers." The Carton House, a magnificent cut-stone Georgian mansion dating to 1739, became a hotel with 165 rooms and suites in 2006.

Hello Mr. Deegan, my husband and I are planning our second trip to Ireland and wish to play a game of golf while we are there.The last time we were there we played at the Royal Belfast and managed to to have a fine playing game without holding people up or embarrassing ourselves. This year we are travelling the southern route starting in Dublin and finishing the.We are doing the southern area most likely going southeast to west Galway for sure.Could you recommend a parkland course with not too much water that we have to deal with(except for scenery of course ) possibly staying there for a night.We would need to rent clubs.Any information would help.Thank you in advance. Kathy Kubisheski

Druid's Glen in County Wicklow south of Dublin has a nice resort onsite, although the golf course is very difficult. You could try the other course on property, Druid's Heath, which has less water and is very nice as well. Carton House has a beautiful property with two courses. The Montgomery probably has too many bunkers for you. The O'Meara course is great fun and beautiful. On the west side, Galway Bay Golf Resort near Galway has a nice hotel and scenic course as well. Check out the photos on the website. It may have too much water for you to enjoy. I'm not sure as I got rained out the only time I was scheduled to play it. Have a good trip.