Are you ready for analytics at your next driving range session?

Product review of the new Rapsodo Mobile Launch Monitor that charts every chunk, duck-hook and slice of your range session in embarrassingly vivid detail.

It's a data-driven world out there and we're all just little bite-sized pawns for companies to crawl.

But at least when it comes to our golf game, data points have never been more readily available for amateurs to analyze. The proliferation of GPS, scoring and shot-tracking devices have spread throughout the avid amateur world. Many of these accessories and apps are affordable or sometimes even free.

It's easy to feel like a golf simpleton in 2019 if you're still just charting just score, fairways, greens and putts.

Then there is the emerging world of launch monitors. For much of the 21st century, the only way a golfer could see their swing's numbers like ball speed or "smash factor" was if you were in the presence of a head golf professional who invested big bucks in a Trackman for their business.

Enter the consumer mobile launch monitor. Now you can see your golf swing's true numbers and spray pattern in all of its ugly and imperfect glory.

The latest entry to this growing market is from Rapsodo. The debut of their golf mobile launch monitor, released this July, is an ambitious one at a relatively gettable price point, $499 MSRP. The unit radar, combined with an iOS device, measures distance, ball speed, launch angle, horizontal angle, club speed and smash factor.

As 21st century people, we've grown accustomed to growing simultaneously awestruck and confused/frustrated by the promises of new tech. Succeeding at the game of golf in any era has proven timelessly confounding to most of us. Can a MLM help discover clarity, or just make the swing more complicated than ever before?

Rapsodo's MLM is highly portable at just 10.3 ounces and 5 inches long. It will fit into just about any pocket of your golf bag. It also comes with a case and clip to hang on the outside, like a bag tag. The thought of dangling a $500 product off my bag makes me nervous. Perhaps you have more faith in a caribiner than I.

To use Rapsodo's MLM you will need an iOS device (Android coming soon). The MLM uses the phone's camera, set on top of the device, to measure and record shots. Initial setup takes a few minutes to calibrate your phone and device. I'd recommend doing it indoors and before arriving at the sunny range where you might have a little tougher time seeing the screen and detailed instructions. Once the session has begun, you can change the club being recorded in the app by waiving the club in front of the device and it will auto-detect what you're holding.

I've been hitting balls at the driving range, consequence-free since the very beginning of my entry into golf about 30 years ago. So this new opportunity to capture data at my fingertips was, frankly, pretty jarring. Rapsodo takes video every shot and uses shot tracer to record your ball flight. Take a swing, turn around, and your stats are all there in gory detail. 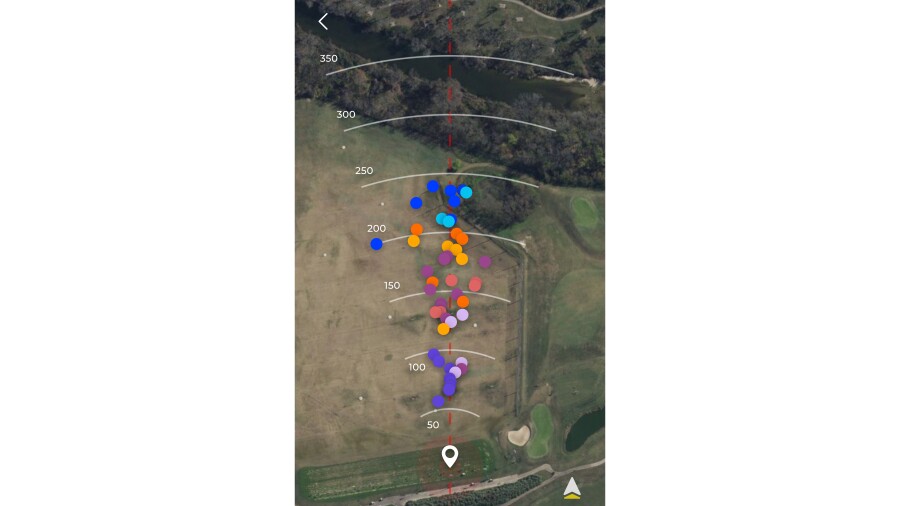 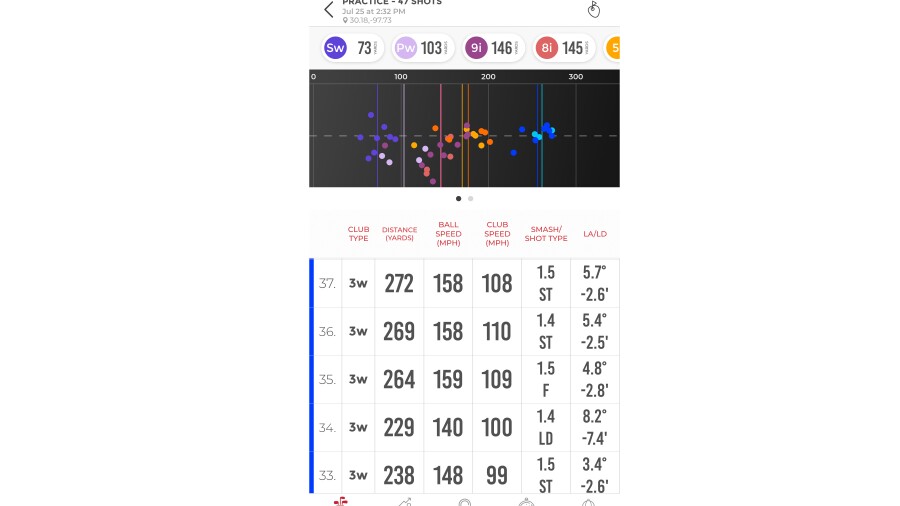 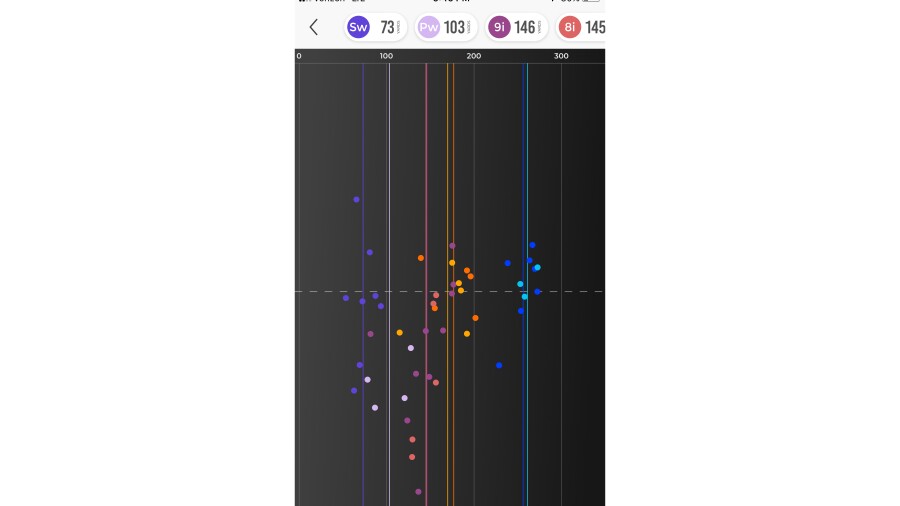 So now after every shot I can look at these numbers and move on to the next ball. Or I can not look at all and review post-round. I won't lie: I'm not entirely sure how to apply all this data. Getting these numbers and consulting with a PGA professional to decide how to attack improvements to your swing technique would be a wise next step.

One potential positive I noticed is that with each shot being taped and recorded, it adds a kind of self-imposed pressure. Endurance athletes typically record every second of their practice sessions. Should golfers, too? Your MLM is always watching and never forgets a sloppy swing. For this reason, maybe the MLM is a mental coach, too.

Over the course of a few range sessions, the accuracy of the monitor seemed pretty solid. Screaming duckhooks and soaring slices are shot-traced with an embarrassing blue tail (but glorious for those fleeting high, straight drives) and in the app you can view your shot patterns collectively or by each club. There were a handful of times during the course of a 50-ball bucket where the shot wasn't tracked - possibly a result of carelessly setting up the ball outside the window of the monitor (you need to be a little more mindful of where you set up each ball). I'm somewhat skeptical of how precise launch monitors are with identifying shot distance based on impact numbers. But I would think that it's easier to ascertain an accurate club and ball speed number. These averages in particular could be very useful when deciding what type of driver lofts or shaft flexes to buy.

A few random notes to consider before buying:

- For now, you can't edit the titles of the clubs in your bag. So at this point, your hybrid club data would be linked to a 5-wood display. I also initially wanted to use it to compare drivers, so I ended up linking one of the drivers to the 3-iron club. I would have preferred to create a whole new club to assign those shots to. More flexibility there would be useful. Officials at Rapsodo says this feature is in the works.

- The MLM works by being set up 8 feet behind you. In cases like my muni that is often mats-only at the back, that means it will sit right in the middle of a busy cart path. How much do you trust strangers in golf carts with your $500 accessory?

- Speaking of localized limitations, when you're banging balls in the southern summertime sun you'll need some sort of shade so the phone doesn't overheat.

- The MLM works for outdoor use, not with indoor nets.

- The mobile app is free, but unlimited cloud storage of every shot can be purchased for $99.

- I did ask a question to support through the app and their response was prompt.

Overall, it's an ambitious device that could prove useful if you know how to digest and apply the results. Range rats who have a jones for analytics will at best find nuggets in their data that guides them to improvement, while at minimum see some mix of humor and gratification in the many flavors your golf swing reveals throughout a large bucket. 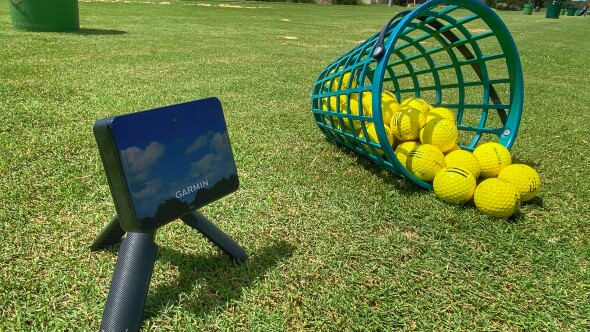 GolfPass may earn an affiliate commission if you buy a product through a link on our site.

Brandon Tucker
Brandon Tucker is the Sr. Managing Editor for GolfPass and was the founding editor of Golf Advisor in 2014, he was the managing editor for Golf Channel Digital's Courses & Travel. To date, his golf travels have taken him to over two dozen countries and nearly 600 golf courses worldwide. While he's played some of the most prestigious courses in the world, Tucker's favorite way to play the game is on a great muni in under three hours. Follow Brandon on Twitter at @BrandonTucker and on Instagram at @btuck34.
5 Comments

"Android coming soon" - how soon will Android version of Rapsodo MLM come out?

Is there software available that will allow viewing the swing and video results on a PC?

I was able to transfer to my mac. I believe PC should work, but you do need an iphone at this time

How would this compare to something like the Mevo, which is in the same price range? Does this device capture ball spin?

No ball spin with Rapsodo. I haven't used the Mevo but Tim on our staff has and made some notes on it in this roundup. https://www.golfadvisor.com/articles/trackman-envy-a-guide-to-portable-launch-monitors-you-can-afford

Tim Gavrich
Senior Writer
Now Reading
Are you ready for analytics at your next driving range session?
Search Near Me