Rock Creek has something for everyone 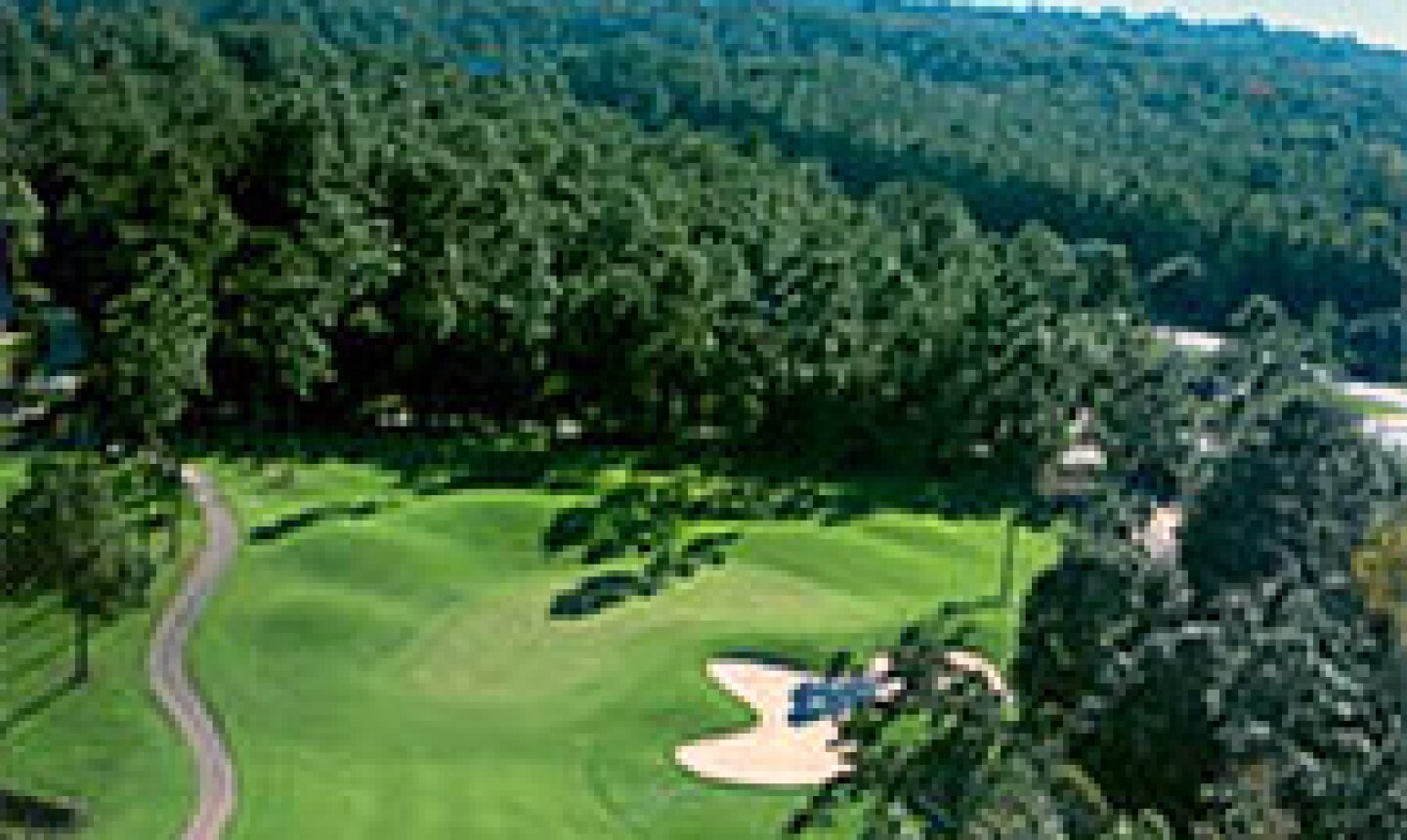 Rock Creek is part of the Honours Golf family.

FAIRHOPE, Ala. - Rock Creek Golf Club is not your typical Earl Stone design.

Oh sure, it has plenty of playable holes that fit Stone's mantrathat all golf courses should be designed for 18 handicappers. (Admit it,most of us are 18 handicappers most of the time.)

But there are also four or five intimidating shots over wetlands that would make most bogey golfers cringe. And that's the beauty of this design, just a half hour east of Mobile and less than 20 minutes north of Gulf Shores, a budding golf destination in its own right.

Rock Creek, a 6,920-yard layout that opened in 1995, has a fun, forgiving side to please the bad swing in all of us, yet the teeth to challenge anybody on their best day.

Rock Creek is part of the Honours Golf family, which includesthe nearby 27-hole Peninsula Golf and Racquet Club in Gulf Shores. HonoursGolf, which has corporate offices in Birmingham, Ala., and Atlanta, alsoowns and operates two top Florida properties - Kelly Plantation Golf Club in Destin and the World Golf Village in St. Augustine, home to the King & the Bear and the Slammer & Squire courses.

Rock Creek has something none of those Florida courses have, a rolling topography that provides spectacular views of the surrounding hardwood forests and thrilling golf.

Yes, Rock Creek is a bargain at $65 during high season whenPeninsula can run into triple digits. That price is a steal considering theamenities the semiprivate club has available.

Rock Creek's practice area includes a driving range with target greens and a 10,000-square foot putting green. But more impressive are the eight outdoor tennis courts, a fitness center and large outdoor pool and spa that members enjoy. Chilled apples are available on the course. All this adds up to a four-star rating from Golf Digest.

"Not to bash those courses down there at Gulf Shores, becauseour sister course (Peninsula) is there, but we do have a bit more of valuefor your golf (dollar)," said Andy Tinkler, the assistant professional atRock Creek.

I almost hesitate to mention that the first four holes are ablockbuster stretch. That makes for an exciting start, and yet, implies therest of the holes are not worthy. That's not entirely the truth.

The first tee shot is fun, a downhill high-wire act to a 525-yard dog-leg left, but some say the second hole is one of the best in the state.

The 434-yard second doglegs hard right, requiring a ton of strategy and accuracy off another elevated tee. You have two choices - boom it long and left, leaving a down-hill lie for an approach shot to an elevated green, or lay back to the 170-yard mark, setting up a long carry over the cavernous gorge of wetland that guards the green.

The setting is visually stunning with three greenside bunkersand a wall of bulkhead wood in back.

"The bulkhead really gives it an amphitheater-like look,"Tinkler said.

Stone said he originally had a problem designing the hole and worried how itmight turn out.

"The developer came to me and said I couldn't put the greenwhere I wanted it to be. He wanted to move the sales center there," Stonesaid. "I said I could do it, but it would cost a lot of money. That's whyyou see that big retaining wall. I had to do that so the office would stayelevated (above the green). It ended up being the signature hole."

The 161-yard third has out-of-bounds all around it, and the 391-yard fourth demands a 200-yard carry over a hazard to reach the fairway.

After two more demanding shots over hazards off the tee at No.11 (a 518-yard par-5) and No. 12 (a 181-yard par-4), Stone's trademarkdesign characteristic shows up on No. 13, a 495-yard par-5. The holefeatures ridges that funnel stray shots back into the fairway, much like Eagle Mountain in Fountain Hills, Ariz.

"Golfers will hit a tee shot going right or left, and they yell out "HelpEarl!" I didn't design it that way (to be so generous)," he swears. "Bettergolfers fuss about it. They reject it. They hit one down the middle, and theguy who hit up on the bank will watch it roll down right next to the one inthe middle."

Stone's soft side only sticks around for a short stint, so take full advantage. The finishing stretch gets tougher. The 16th plummets 187 yards downhill, while the 427-yard 17th climbs to a green with a hidden wetland onthe left.

If you're serious about playing Rock Creek, get here soon. There is a chance the course could go private if membership continues to grow, Tinkler said.

"We are geared to be a members course," Tinkler said, referring to the course's amenities and commitment to service.

Locals have been raiding two local seafood hangouts in nearby Mobile for years - Roussos Seafood Restaurant and Wintzell's Oyster House. Roussos, located downtown for decades, is slated to move in the near future, so call ahead before you venture downtown. The Roussos family has owned a restaurantin Mobile for more than 40 years, despite losing two to hurricanes. Wintzell's, a landmark on Dauphin Street, not only has great seafood, but a true personality under its roof. Founded in 1938 by Oliver Wintzell, a goofy-looking sort with an off-beat personality, he decorated his walls with homespun sayings.

The best way to find the hotel of your choice is through Don Faggard, thepresident of Fairways Golf Company, a highly successful golf trip planner.For more information on the stay-and-play packages, call (800) 647-CHIP. Tosee the options in the Mobile area, which includes well-respected names like Holiday Inn, Hampton Inn and Radisson, visit www.fairwaysgolftravel.com/AreaLodging.asp?ID=MOBILE.

Driving Directions from North and Central Alabama: Head I-65 South to Exit 37 Bay Minette, South on Highway 59 to I-10, turn right onto I-10 heading west to Exit 35A, left onto Highway 98, go 6.5 miles and Rock Creek Golf Club is on the left.

Rock Creek is a sister course of the highly regarded Peninsula Golf and Racquet Club in Gulf Shores.