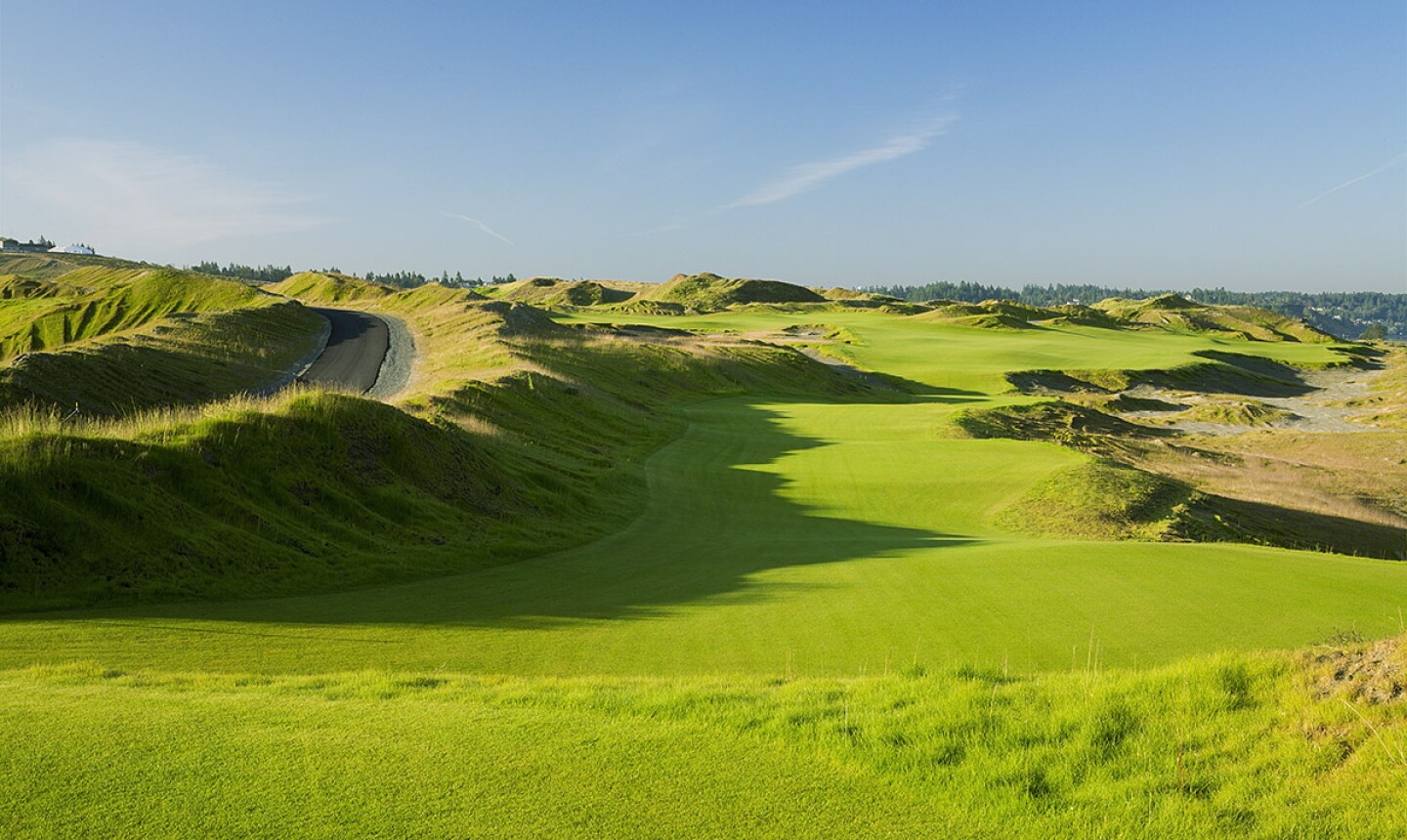 Chambers Bay was seeded with fescue from tee to green, so it will play fast and firm no matter the weather at the 2015 U.S. Open. Courtesy of Chambers Bay 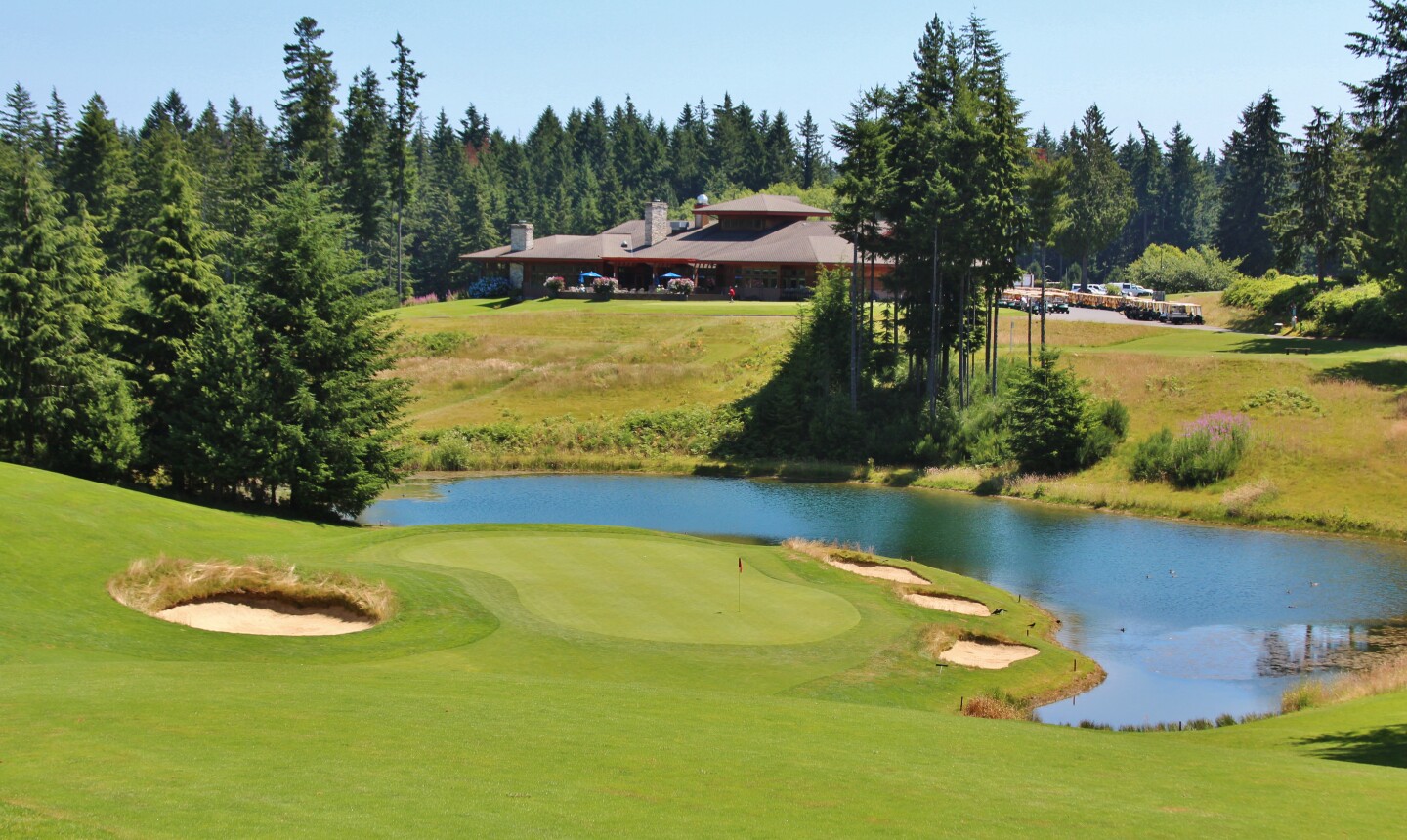 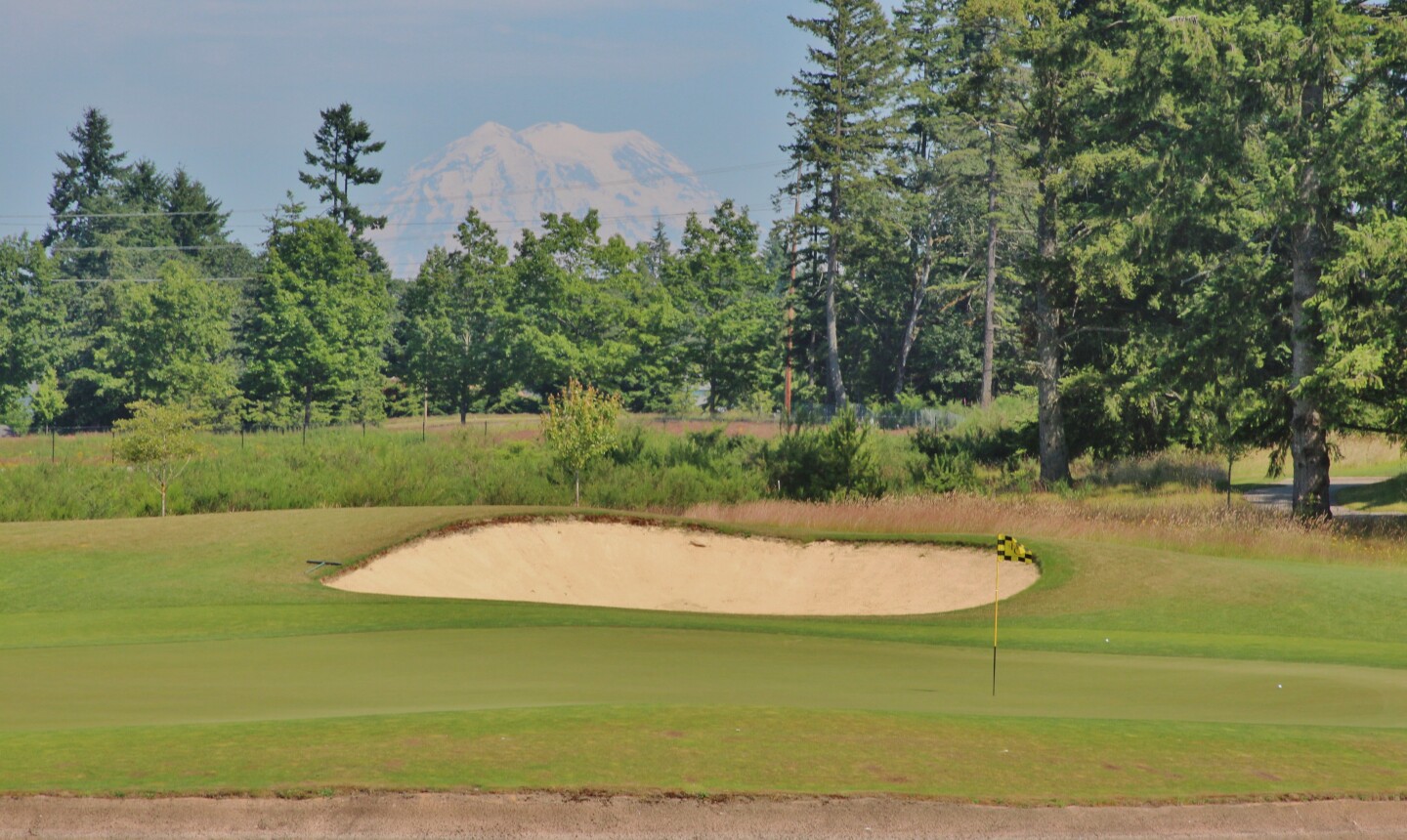 SEATTLE -- The Emerald City, known for its grunge rock, coffee and wet weather, has built up quite a golf empire over the past decade, blossoming into a destination worthy of players from around the world.

The opening of Chambers Bay in 2007 and the subsequent announcement that the Robert Trent Jones Jr. course would host the 2015 U.S. Open essentially became an "open for business" sign for golf tourism that was previously nonexistent. There's no better place to enjoy the beauty of the Pacific Northwest's mountains and evergreen forests than from an elevated tee box or green.

Here's a top 10 list of the best public golf courses within an hour's drive of the Seattle-Tacoma International Airport:

RTJ Jr. was given 250 acres in a giant sandbox, a former gravel quarry, to create his 7,742-yard ode to links golf along the scenic Puget Sound. He moved roughly 1.4 million cubic yards of dirt to create towering dunes on this municipal golf treasure owned by Pierce County and operated by KemperSports. A lone pine tree, the only tree on the course, frames Chambers Bay's backdrop to the 139-yard 15th hole, a par 3 tucked hard against the shore. The par-4 16th hole ("Beached") and the par-3 17th hole ("Derailed") play alongside railroad tracks, just like a traditional links. Not everything has been easy, however. The grow-in of wall-to-wall fescue has been a challenge, especially on the severely undulating greens. Several holes have been revamped as well, but the trial run at the 2010 U.S. Amateur proved that Chambers Bay should be ready for the big time.

John Harbottle III's Olympic Course at Gold Mountain opened in 1996 to complement the older Cascade Course built in 1971. The 36-hole club, owned by the city, might be the best municipal value in the country. The setting of the backwoods Kitsap Peninsula is quintessential Washington state, right down to the mature evergreens, ski-slope-like terrain and the backdrop of snow-capped mountains. Gold Mountain's crowning moment, the 81st U.S. Amateur Public Links Championship in 2006, helped cement its legacy as a top tournament venue. Prior to the event, officials from the United States Golf Association flip-flopped the nines, setting up one of the most distinct finishes in elite tournament golf, a drivable par 4 that can play anywhere from 271 to 325 yards. It's all risk-reward for the participants and pure fun for the rest of us.

Seniors and higher handicaps playing at Gold Mountain tend to favor the 6,707-yard Cascade Course, the original layout dating to the 1970s that's flatter, easier and shorter than the Olympic Course. It never costs more than $40 to play and is just as scenic. Although the fairways are narrower, getting on in regulation is infinitely easier. Punchbowl greens kindly receive even sloppy run-on approach shots. Be forewarned: the 168-yard 17th has the most severe green on the property.

Keith Foster's fine 7,146-yard design shares glimpses of Mount Rainier on clear summer days. Druids Glen's reputation as one of the toughest golf courses in Washington state comes from a rugged 230 acres littered with 60 bunkers, nine lakes and fast poa annua greens. From the 6,500-yard blue tees, the best hole might be the riskiest. The 281-yard seventh tempts players to pull driver, but the narrow entry to a green sitting on a shelf accepts only perfect shots. Others end up in the three bunkers, water or trees.

The Home Course, the future home of the Pacific Northwest Golf Association and the Washington State Golf Association, has a unique history. There is evidence that the site was home to a rudimentary six-hole golf course built in the 1800s around Fort Nisqually, a main trading post and supply center for early U.S. settlers and local Native Americans. In 1906, today's DuPont Company built a plant to manufacture explosives on the land. During the transformation into a golf course in 2007, architect Mike Asmundson kept some of the old cement blasting walls by grassing them over and used them as mounds. The dynamite-shaped tee markers are a tribute to this past. Golfers will have a blast (pun intended) playing the 7,424-yard course. More than a dozen authentic sod-wall bunkers add to its links look and feel.

There's only one way to access private TPC Snoqualmie Ridge, which hosts the Champions Tour's Boeing Classic. The luxurious Salish Lodge & Spa, which celebrated 25 years in 2013, offers several types of golf packages. A "mancation" package includes a round of golf and a steak dinner at the resort. A couples package includes a spa day for her and golf for him. The lodge overlooks the breathtaking Snoqualmie Falls. The TPC's 14th hole is just as beautiful as the waterfall, tumbling over a chasm to reveal a risk-reward par 4.

The 7,206-yard Trophy Lake golf course, another Kitsap Peninsula gem, keeps its ponds next to the sixth and 18th greens stocked with fish. Fly rods are available for rent inside the clubhouse. There are no true signature holes on this secluded John Fought design, just a steady stretch of good ones woven together like a comfy blanket. The round ends with a green protected by a stream fed from a landscaped water feature.

Although 15 minutes outside our target range, it's worth the extra effort to find Salish Cliffs Golf Club, the star of the Little Creek Casino Resort, which is owned by the Squaxin Island Tribe. The 7,269-yard design by Gene Bates opened in 2011 in the Kamilche Valley on a dramatic rolling site with 600 feet of elevation change. The strong collection of par-4 holes climaxes at no. 16, where an elevated tee wraps around a virtual desert of bunkers. The two finishing holes, no. 9 and no. 18, share a pond and a double green. The environmentally sensitive project has been designated as "Salmon Safe," a big thumbs-up from the tree huggers of the Pacific Northwest.

The Golf Club at Newcastle, Newcastle

The castle-like clubhouse, serving up views of the downtown skyscrapers and Space Needle, is the first clue that the 36-hole club sells a premium experience. Bob Cupp designed both Coal Creek and China Creek. The 7,024-yard Coal Creek Course, designed with input from local hero Fred Couples, usually is the choice for first-timers based on better vistas and a green perched above a waterfall on the par-5 17th hole. Its 300 feet of elevation change can make for a wild ride, and a quirky hole or two, but nobody beats the scenery. The 6,632-yard, par-71 China Creek Course plays shorter and easier.

Oki Golf, which operates The Golf Club at Newcastle and Trophy Lake Golf & Casting, also manages Washington National Golf Club, the 7,300-yard home course of the University of Washington golf program. Players love the rugged look of Fought's design. If it can challenge the Pac-12 Conference's best golfers, it will certainly bare its teeth against everyday players.

I agree there are a few more hidden gems not listed here including Fairwood Golf & Country Club http://cascadegolfer.com/fairwood-country-club-welcomes-12th-man/

There's a few hidden gems missing from this list of great golf courses, here's a guide and map to most of the better public golf courses in the Seattle area: 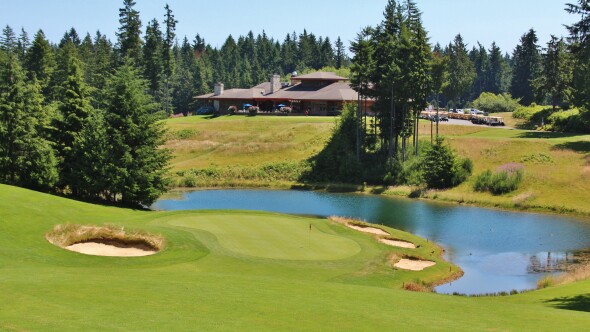 Articles
3 days in Seattle: Play golf for less than $200
With the 2015 U.S. Open at Chambers Bay closing in fast, now's the perfect time to execute a golf trip to the Emerald City. Since Seattle isn't known as an A-list golf destination in the Pacific Northwest -- Oregon steals much of its thunder -- a three-day getaway with greens fees costing less than $200 remains an attainable goal.
2 Min Read