Want to live on The Old Course At St. Andrews? A rare opportunity just became available.

The Kohler-owned Hamilton Grand building has an apartment on the market. The price is steep but the location is almost impossible to beat.

ST. ANDREWS, Scotland - If you could have a home anywhere in the world, where would you choose?

Chances are, if you're reading this, St. Andrews, Scotland is pretty high on your list.

Owning a home in the Auld Grey Toon is a dream rich in details for many golfers: the chance to amble down its narrow streets, between centuries-old stone buildings, heading for the Links Trust courses with a golf bag slung over the shoulder. A round or two on The Old Course and a drink amongst caddies and visitors in the Dunvegan or another cozy pub are in order. Toddle back home through town, get up, do it again tomorrow.

Of all the residential addresses in St. Andrews, the most coveted is arguably 21 Golf Place. That's the Hamilton Grand, the reddish Dumfries sandstone edifice that lords over the 18th green of The Old Course and appears in every town-facing photo and video of the golf course. Its neighbor: the grey clubhouse of the Royal and Ancient.

The Hamilton Grand was originally a hotel, opened in 1895. A luxury property even back then, it was the first hotel in Scotland with hot and cold running water. It also was the first to install an elevator.

Requisitioned for pilots' lodgings during World War II, the building eventually was taken over by the University of St. Andrews and used for half a century as a dormitory (lucky students!). It changed hands in the early 2000s and ultimately fell into disrepair until Herb Kohler bought it in 2009.

Kohler, who had bought the nearby Old Course Hotel in 2004, had the Hamilton Grand's common areas restored to their historic grandeur while converting its rooms into 27 2-, 3- and 4-bedroom apartments.

A unit in the building, the two-bedroom, two-bathroom Apartment 26, just came on the market. It has a list price of £2,829,000, or just over $3,864,000 (as of the exchange rate at press time). Views from this particular apartment are aimed over the town of St. Andrews, rather than The Old Course itself. Still, the location is exceptional and the building's Communal Terrace, open to all residents, offers an all-time-great view over the links west and north toward Carnoustie.

It's a steep price, but between the incomparable location and other perks of ownership - golf privileges at the St. Andrews courses, including the inland Duke's layout, plus the ability to charge food and beverage from The Old Course Hotel bars and restaurants to the apartment account - there's an awful lot to like for the avid golfer with the means to consider it.

To see the real estate listing for Apartment 26 at the Hamilton Grand, click here. 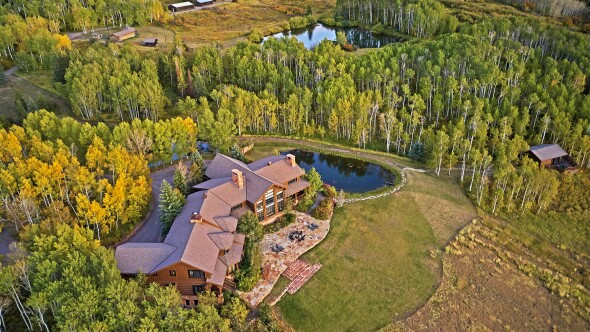