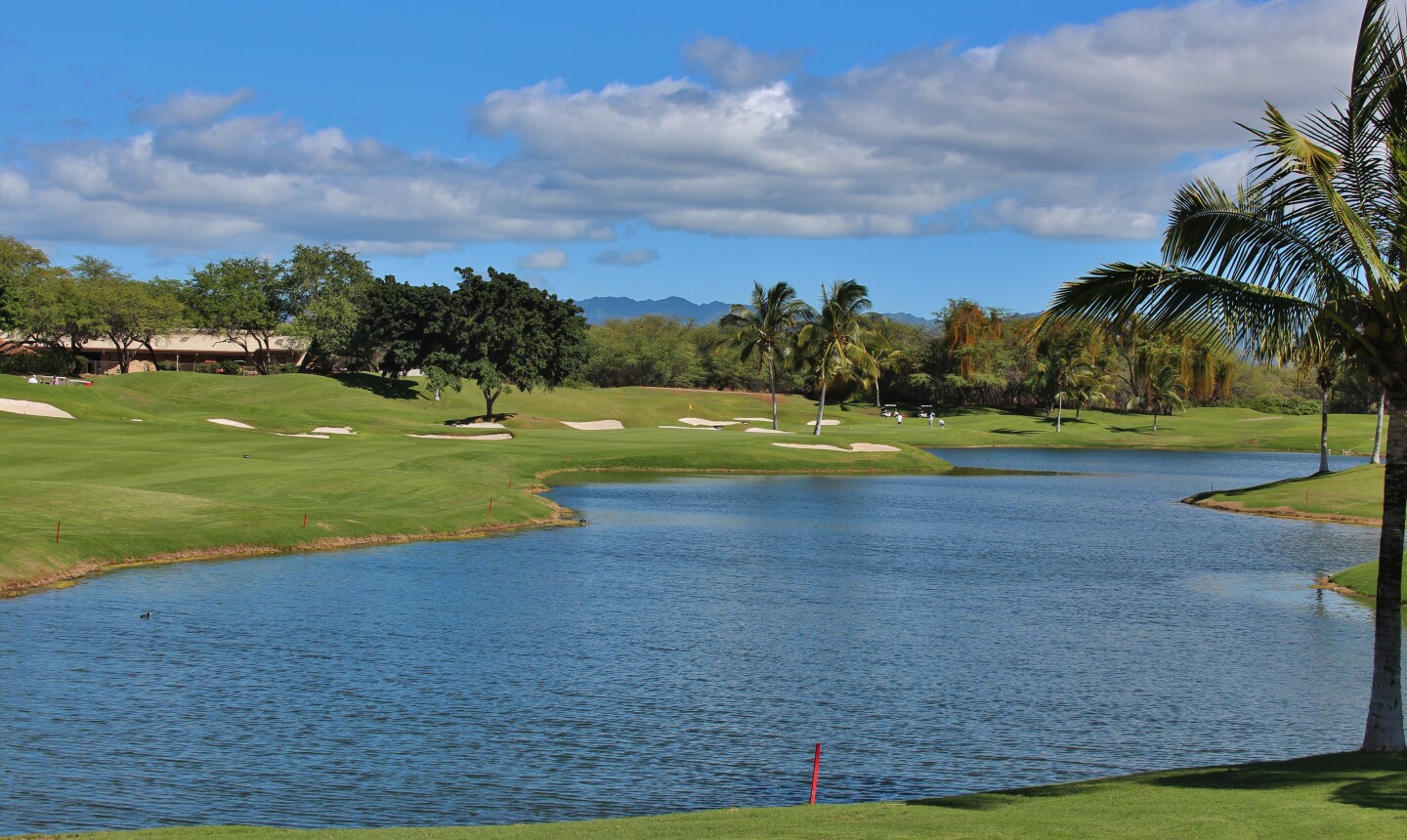 A large pond comes into play on several holes on the back nine at Ewa Beach, like the par-5 10th hole, seen here. Jason Scott Deegan/Golf Advisor 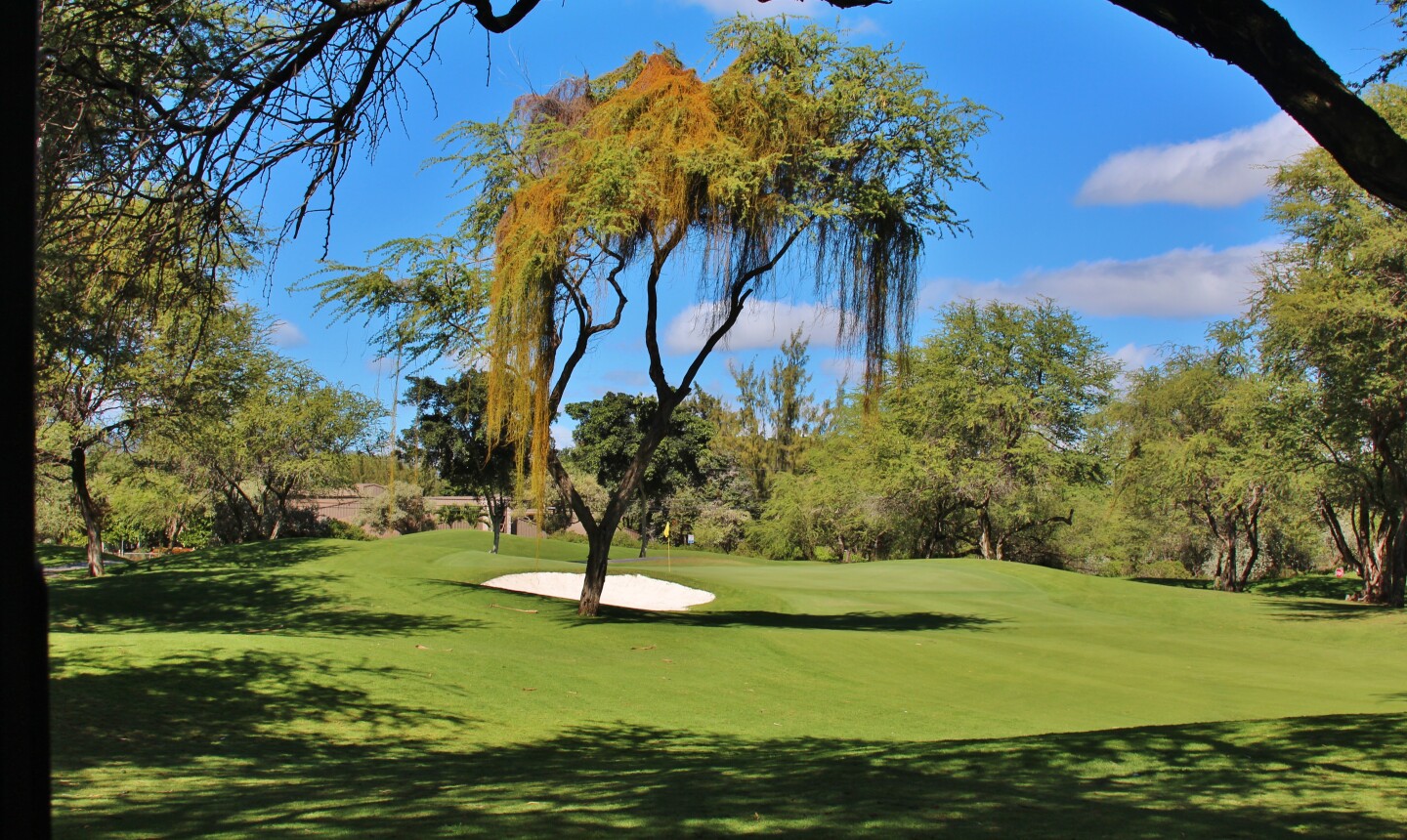 Trees block the left side of the third green at Ewa Beach Golf Club on Oahu. Jason Scott Deegan/Golf Advisor The 6,711-yard course sits in one of the driest spots on Oahu, roughly 40 minutes from Waikiki, yet the place is wall-to-wall green like it's wetter than Ireland.

"It is always in terrific condition. The greens are impeccable," said Fred Bogert, a golfer from Hawaii Kai who had just finished a round in January. "It doesn't rain around here too much. For the price, it's amazing you can't find a brown spot on the course."

"I don't want to say too much because I don't want the best-kept secret in the [Hawaiian] islands to get out. For us, it's phenomenal [to play here]. The weather is always beautiful. I would hate for it to get out."

The secret of Ewa Beach

Ewa Beach Golf Club opened in 1992 as the first course in Hawaii to plant Seashore Paspalum. This environmentally friendly grass, which is tolerant to saltwater, provides prime playing conditions that stay lush when other courses brown out.

The first thing golfers will notice is the unique archeological site -- one of several on the property -- next to the first tee. The "Kauhale" is a reconstructed residential complex that dates to the earliest record of occupation on the island somewhere between 1000 A.D. and 1695 A.D.

The Robin Nelson design starts out playing tight and unforgiving for the sprayer. The oddly shaped trees and branches of a Kiawe forest pinch the fairways of the first nine holes.

Justin Neal, who lives nearby, said Ewa Beach plays much different than the more open Hawaii Prince Golf Club just down the street.

"If you mishit, you are under trees," he said. "It's a beautiful course with great scenery, but you've got to play safe golf."

Five ponds impact eight holes, many on the more open back nine. The largest lake creates a dramatic stretch starting at No. 10, a strong par 5. The same hazard protects the 13th and 15th greens as well. No. 2, a par 4, and No. 16, a par 3, share a huge putting surface, the only double green on the island.

Bogert said the contrasting nines force him to change strategies off the tee.

"The first nine gets real tricky," he said. "With the narrow fairway, you must place the ball. I club down to a 3-wood. It's not about the hazard. It is about the placing and direction."

Ewa Beach looks and plays like one of the top public golf courses on Oahu, joining the ranks of the Ko Olina Golf Club, Ko 'olau Golf Club, Turtle Bay Resort's two courses and the Hawaii Prince Golf Club. The front nine plays tougher than the back, even though the potential to lose more balls comes later. Galleries
Ewa Beach Golf Club will stimulate the senses on Oahu
Ewa Beach Golf Club, roughly a half-hour's drive from Waikiki, was the first course in Hawaii to plant Seashore Paspalum grass, which provides prime playing conditions that stay lush and consistent. Kiawe trees pinch the fairways of the first nine holes of this Robin Nelson design. The back nine opens up, although the water lurks ominously at the end of the round.
9 Images