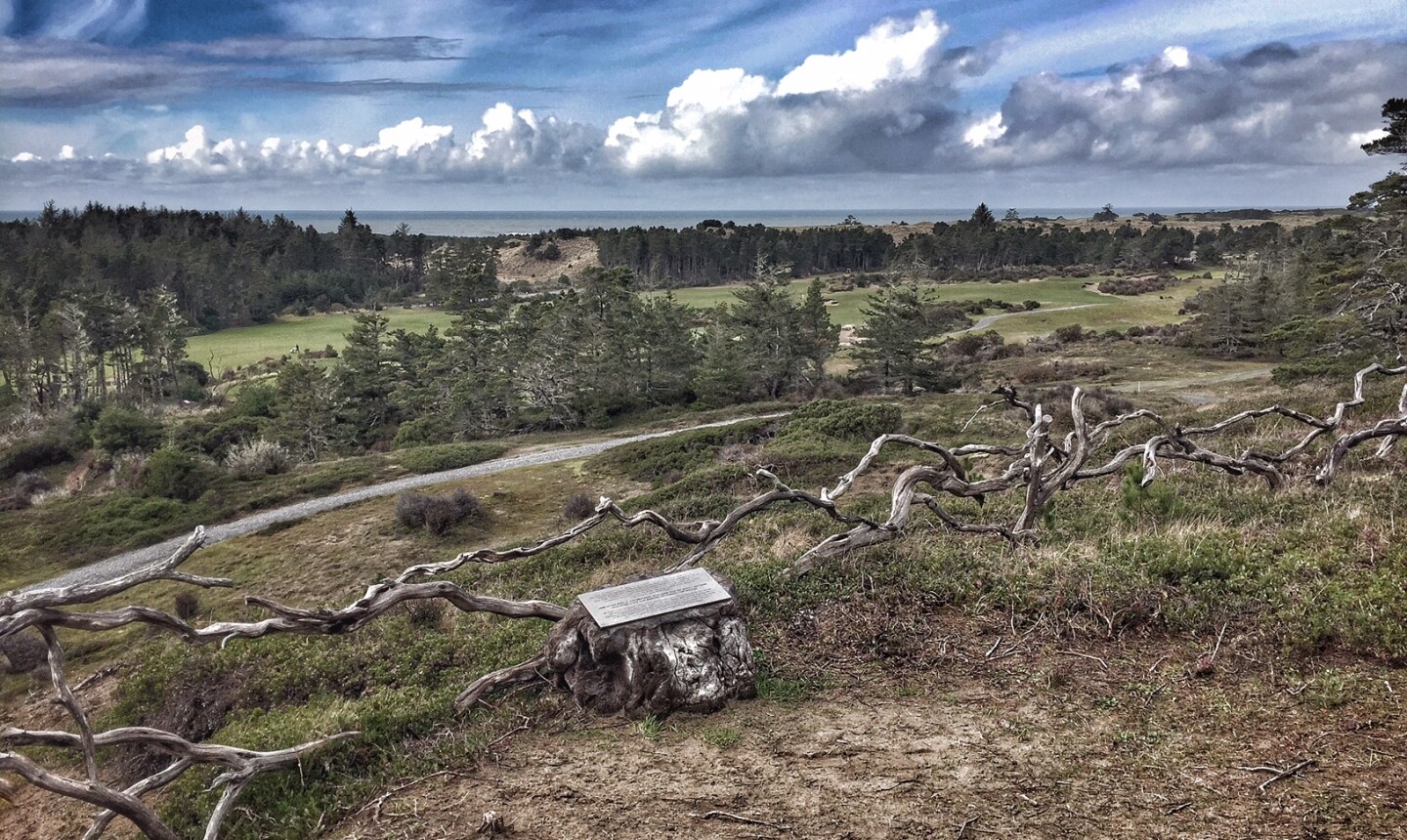 Another favorite of mine: This plaque near the 14th tee of Bandon Trails signals the view that convinced Mike Keiser to build Bandon Dunes Golf Resort on the coast of Oregon. Jason Scott Deegan/GolfPass 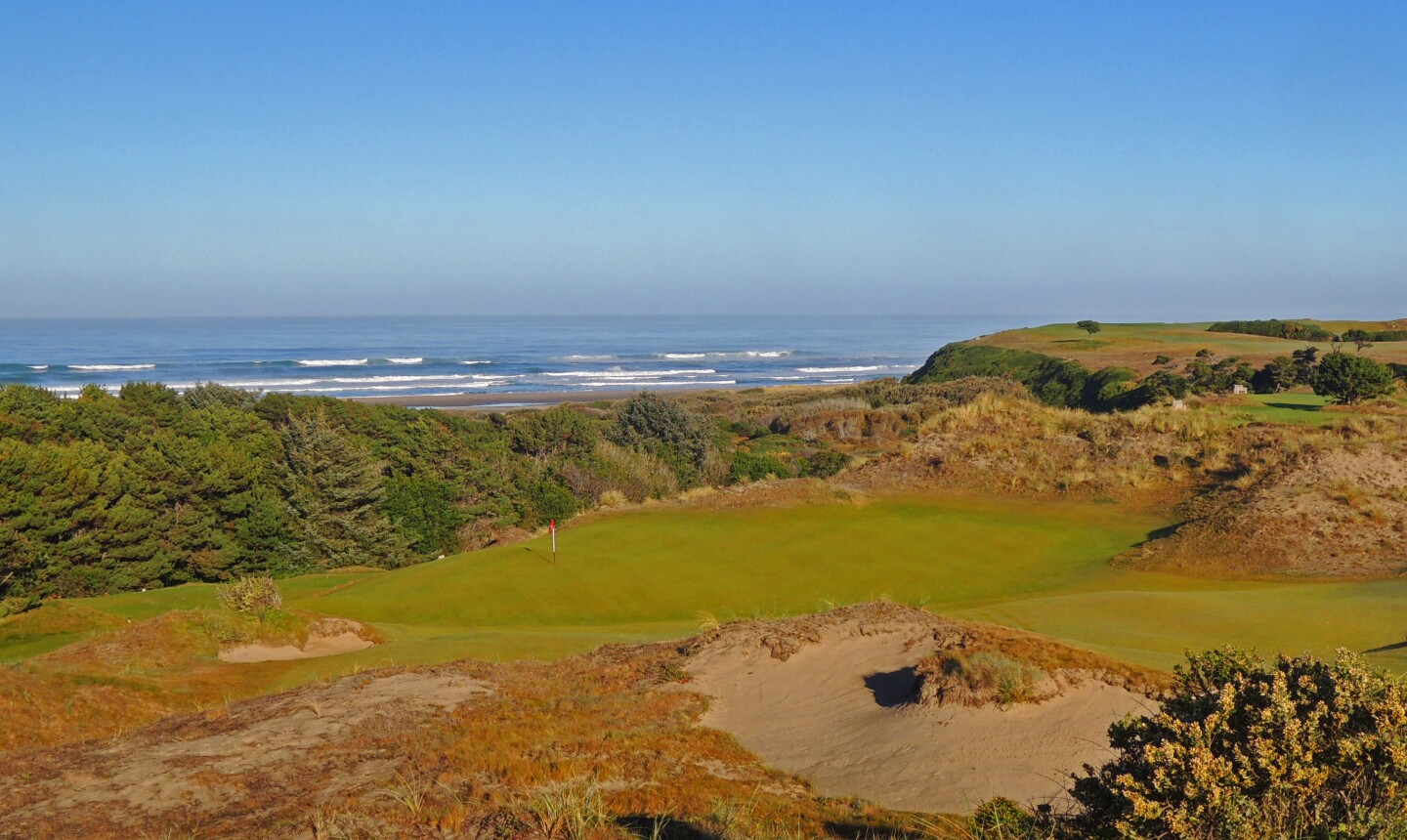 With the most dramatic elevation change on the course, Bandon Preserve's fifth offers great views of the ocean. Mike Bailey/Golf Advisor

BANDON, Ore. – My caddie, Joey Russell, handed me a hybrid.

I wanted a wedge. All I could see on the terrifying 85-yard approach to a plateau green on the par-4 sixth hole at Pacific Dunes was the ferocious greenside bunker on the left. Russell was wisely training me how to play golf properly at Bandon Dunes Golf Resort. After all, he's one of the few original caddies dating back to the resort's opening in 1999.

I punched the shot just perfectly. The ball climbed and crested the huge hill and settled 10 feet from the cup, setting up a rare birdie during five days of golf in rough early season weather in March. A likely chunked wedge wouldn't have fared so well.

The shot was a proper reminder that this tiny little slice of golf heaven in southwest Oregon is perhaps the only place in America where true links golf can be played. Bandon Dunes has quickly risen to the top of the heap on every golfer's bucket list. It's more affordable than Pebble Beach Resorts in sunnier California and more fun than playing four dastardly Pete Dye designs at The American Club in Wisconsin. It's got more holes on the ocean than the Kiawah Island Golf Resort in South Carolina. Bandon Dunes, a resort sculpted upon the edges of 100-foot oceanfront cliffs, is almost perfect … except for dodgy weather and the hassles of getting here. My first trip to the resort was memorable in each of these categories, but don't let my bad breaks derail you.

Bandon Dunes will live up to the hype, with or without sunny skies, cancelled flights or otherwise.

Getting to Bandon from anywhere outside of driving distance is an adventure to put it kindly.

The twice weekly round-trip flights, which will be offered every Wednesday and Sunday from June 11 through Oct. 4, put Bandon Dunes within a single stop of virtually every major city in the United States. The flight schedule was designed specifically with golfers in mind. The arrival flight (DEN-OTH, 11:15 a.m.-1:09 p.m.) departs from Denver late enough for passengers from most major airports to connect, and the early afternoon arrival allows enough time in the summer months to fit in 18 holes before sunset. The early afternoon return flight (OTH-DEN, 1:44 p.m.-5:17 p.m.) gives golfers just enough time to tee it up for one last morning round before heading to the airport.

My March flights in and out of North Bend weren't so smooth. As I was boarding my flight from San Francisco, the gate agent announced that we might be diverted to Eugene mid-flight because of dangerously "low" cloud cover in North Bend. Thankfully the plane landed in North Bend without incident, although it was bizarre that the flight attendant would not tell us where we were until on the ground.

The return home was even wackier. The original flight was cancelled after the plane from San Francisco WAS diverted to Eugene. The airport staff in North Bend gave us three choices: Take a 2 ½-hour cab ride to Eugene to catch a later flight, come back tomorrow, or pray that the plane on the way back to San Francisco lands and picks up passengers waiting in North Bend. I wisely choose the first option, taking a cab stuffed with strangers. I got home eight hours later than expected, but at least I made it, unlike those poor folks who waited for a plane that never came.

Next time, I'll likely drive from where my home in San Jose, a 573-mile, 9-hour trek. It's probably worth it to avoid unforeseen airport fiascos. Granted, my flight drama was during throngs of the worst winter the West Coast has seen in decades. Hopefully, summer weather equals friendlier skies.

By now, you've probably already seen plenty of pictures of the links (I didn't know so much gorse existed in America) or read all about how Mike Keiser built Bandon Dunes from a vision in his mind or heard Matt Ginella rave about Bandon (the name he has bestowed upon his pending first child) on Golf Channel's Morning Drive. I'll just offer some quick first impressions:

I did spend plenty of quality time off-property, something most golfers don't. For two nights, I holed up in a magnificent vacation rental called "All Sunsets & Surf" across the street from a beautiful beach and the Face Rock State Scenic Viewpoint. It is one of several homes offered by the owners of Bandon Crossings Golf Club, a fun course in its own right. Designed by Dan Hixson, Bandon Crossings delivers some luxuries Bandon Dunes doesn't - bentgrass greens, shelter from the coastal winds on a gently rolling piece of forested land and best of all, carts for sore feet. The five par 3s are superb.

I also toured more coastal cliffs belonging to two future courses that could become just as special as what's at Bandon Dunes – the Sheep Ranch near the resort and Pacific Gales in Port Orford, a budding links destination 35 minutes south of Bandon. The Sheep Ranch, already a collection of greens, tees and fairways rented out by the half day near Bandon Dunes, is expected to be the site of a new Gil Hanse design. No plans for construction have been announced.

Meanwhile, Pacific Gales is in the final stages of raising money and getting a few government regulatory details wrapped up, so it can begin construction later this year. The routing by Chicago-based architect Dave Esler finishes with holes set upon 100-foot ocean cliffs at the end of each nine. "It's a great piece of land," says Pacific Gales co-founder Jim Haley.
Read more here to find out how you can become a founding member of the club.

Fine dining at Redfish, home to a cool, upstairs loft for rent featuring stunning views of the rocky coast, and a tour of the adjacent Hawthorne Gallery, stocked with intriguing art, completed my introduction to the tiny but charming fishing village of Port Orford.

What's my favorite course at Bandon Dunes? It's the question everybody gets asked.

I posed the same query on social media and enjoyed the banter that followed. There is no consensus, that's for sure. Tom Doak's Pacific Dunes got the most first place votes in my informal poll and Old MacDonald got the most last-place votes, but all four are almost interchangeable. My personal preference leans toward this ranking (which could change next time I visit):

I was smitten with how enjoyable and different Bandon Trails by Bill Coore and Ben Crenshaw felt and played compared to the other courses. I didn't take to the twists at Old Mac – the wide, featureless fairways and evil greens by Doak and Jim Urbina – with similar passion. It just didn't fit my eye or my game. Even so, there are some spectacular holes on Old Mac (including Nos. 3, 7, 8, 18).

Bandon Dunes, the resort's original course by David McLay Kidd, seems to be the best mix of ocean views and playability. Possibly the one consensus is that everybody loves the Preserve, the 13-hole, par-3 course. It's got everything to love about links golf – punchbowl greens, dunes, shifting winds and ocean views – all packed into a condensed 1 ½-hour round that's a friendlier walk.

After hiking 112 holes in hail, rain and high winds for five days, I just couldn't muster the strength to putt the Punchbowl, have a shootout on Shorty's or explore the Labyrinth, a maze on the resort grounds. Now that I'm home again, my day dreams continually drift back to Bandon Dunes. Just what Keiser wanted.