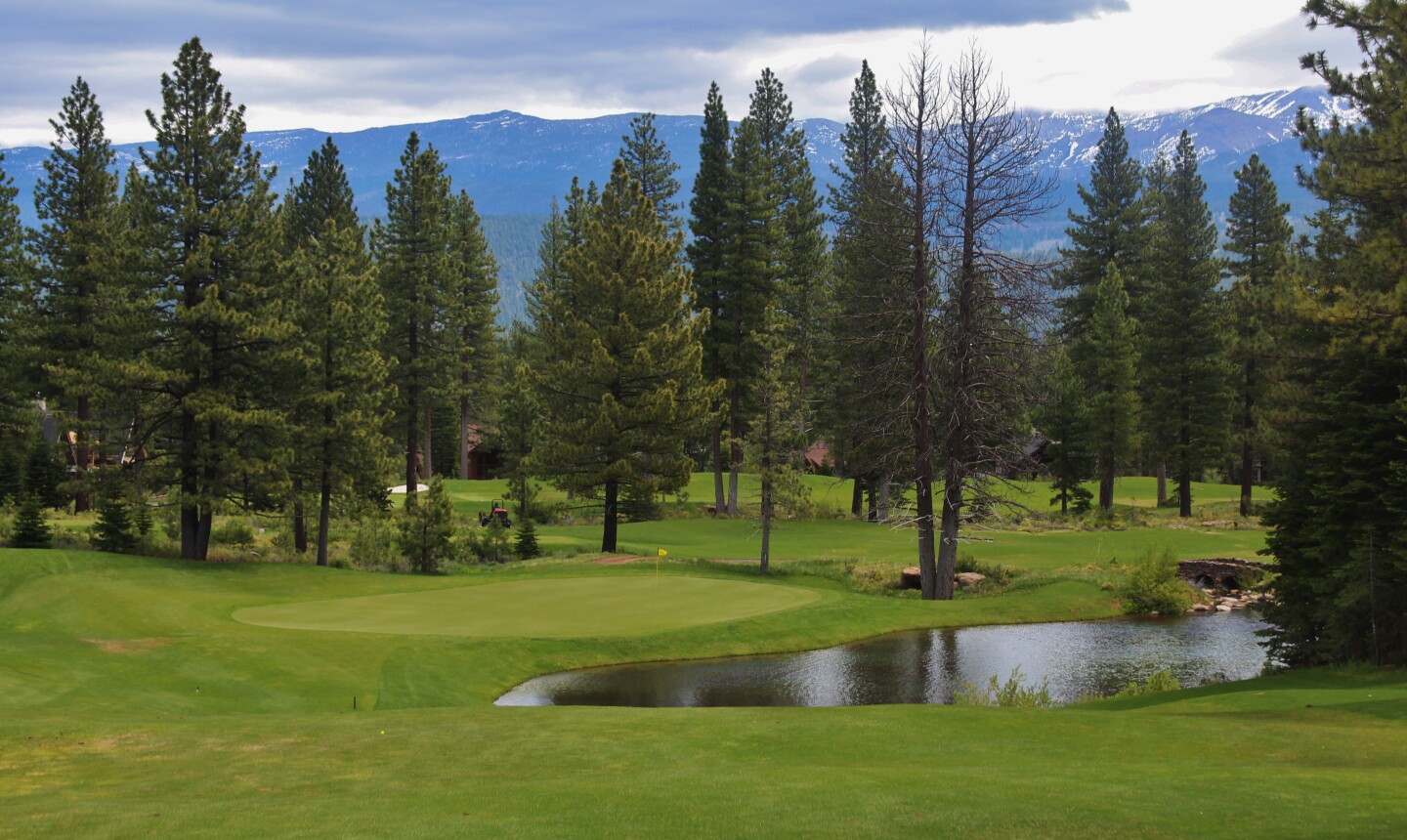 After a blind tee shot on no. 17, golfers face this approach at the Schaffer's Mill Golf & Lake Club. Jason Scott Deegan/Golf Advisor What a backdrop on the 10th hole at the Lake Tahoe Golf Course. Jason Scott Deegan/Golf Advisor 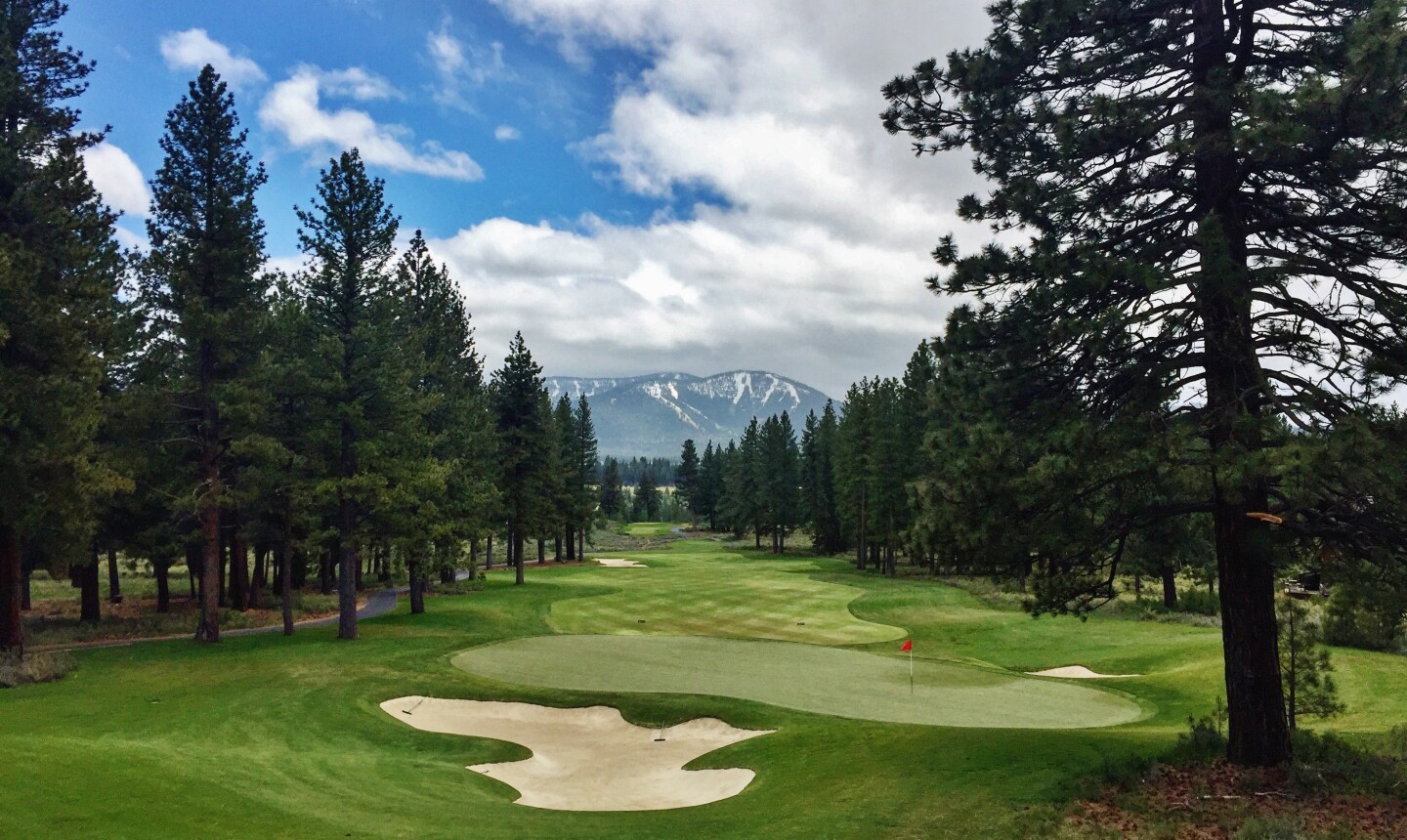 A view from the clubhouse patio above the finishing hole at Old Greenwood. Jason Scott Deegan/Golf Advisor 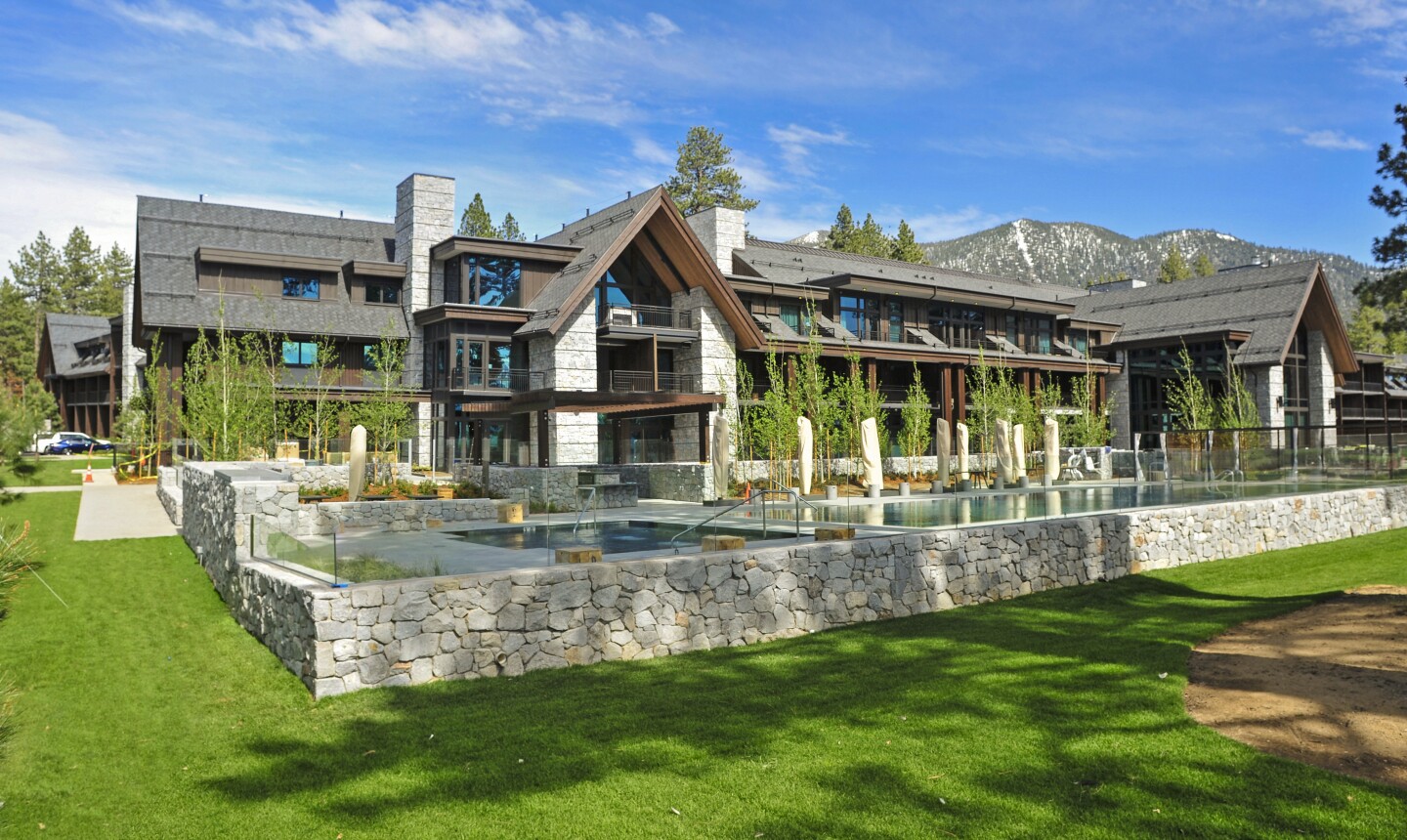 The Lodge at Edgewood Tahoe opened in June, giving golfers a luxury stay and play along the shores of Lake Tahoe. Courtesy of Rod Hanna

SOUTH LAKE TAHOE, Calif. – There are quite a few beautiful places in America.

And then there’s Lake Tahoe. No matter how many photos I show you or how many over-the-top adjectives I use in this story – majestic, marvelous, magical, mesmerizing – nothing can describe such a surreal, serene setting.

Snow-capped peaks of the Sierra Nevada mountains, blanked by towering pines and evergreens, surround the lake’s pristine blue waters. Throw a green golf course like Edgewood Tahoe in the mix, and it’s just about heaven.

Take a look at this video:

Tour some of the best golf courses around #LakeTahoe #livingthegreen

Living in the Bay Area, I try to get there as often as I can, especially when the summer heat pounds Silicon Valley. It’s a four-hour drive on a good traffic day, easily within range for a three-day weekend or a weeklong adventure. There is an amazing array of 44 courses in the region. I binged on a buffet of five – a muni, a resort course, a private club, a semi-private club and one of the most expensive courses in America among them. That about covers golf's full spectrum.

Not bad for a ski destination, right?

If you haven’t been to Edgewood Tahoe recently, you wouldn’t recognize the place. Its transformation to an elegant lakefront retreat is complete with June’s opening of a new 154-room Lodge.

The LEED-designed Lodge - home to an 8,500-square-foot spa and salon, 200-seat bistro restaurant, 3,000-square-foot ballroom, adventure center, kids camp and shops - celebrates the American West with dark wood tones and cut stone. Its new grass lawn replaces the old golf course parking lot, bleeding directly into the lakeshore near the ninth green. Even its outdoor pool and hot tub look out upon the lake. It’s a more luxurious option than the nearby casinos that give the south shore its unique character. It will be a happening spot during the American Century Championship, the celebrity golf tournament televised by NBC Sports that has become the lake’s signature summer party every July.

Former athletes and celebrities tend to go low on Edgewood Tahoe, an immaculate course with four holes directly on the lake, the new ninth (redesigned last year to prepare for construction of the lodge) and the famous three-hole finishing stretch, the par 5s at no. 16 and no. 18 and the par-3 17th where all the boats gather for the tournament. It’s always an enjoyable round with lots of doglegs and interesting angles.

I’m not normally a big gambler, but the Hard Rock Hotel and Casino Lake Tahoe hosted a great night out. A reported $60 million has been poured into renovating the former Horizon Casino Resort since the Hard Rock’s debut in 2015. After a casual meal dining outdoors, my group invaded the gaming floor for a slots tournament. The Hard Rock brand attracts a younger clientele than most casinos, so it's got a good vibe. I slept comfortably at the Lake Tahoe Resort Hotel at Heavenly across the street.

Going from perhaps the destination's best course - Edgewood Tahoe – to the best value - Lake Tahoe Golf Course - I didn’t feel neglected in the least. Sure, the conditioning between the two is night and day with Lake Tahoe GC being a California State Parks muni run by American Golf. The record-setting snow this winter has decimated three fairways, but if you can look past being forced to take a free drop on those holes, this is one cool track. It makes great use of the upper Truckee River. The par-4 15th hole is, by far, the best drivable par 4 in the region, playing 279 yards while making a dogleg right around some towering pines.

After lunch, it was on to the Championship course at Incline Village 45 minutes away. Holes twist up and down the mountainous terrain, providing glimpses of the lake. It’s got some elements of target golf, even as a resort course. For example, the par 3s at nos. 6 and 14 are well protected with hazards. Our dinner served in the Grille at the Chateau was the third function held in the clubhouse that day. The staff and chefs pulled them off with ease.

I spent the night at Granlibakken Tahoe, a series of lodges buried in the woods outside Tahoe City. It’s known as a family and corporate retreat with tennis courts, ropes course and hiking trails.

Few destinations do high-end golf and an artsy, funky downtown like Truckee. The day started with a wicked rain squall that sent my foursome running back into the clubhouse at the Schaffer’s Mill Golf & Lake Club, a classy private club that allows public play on Mondays. This exclusive golf community has made a dramatic turnaround since changing owners and names in 2011. Glorious backwoods homes are sprouting up along the golf course. In terms of most interesting holes, Schaffer’s Mill finishes on top among the courses I’ve seen in Reno-Tahoe. The back nine is quite special with a really cool reveal after the semi-blind downhill drive on no. 17.

What a grand finale at Old Greenwood, a semiprivate club with one of the best golf academies/practice facilities in the nation. Its driving range is so long that three of the last four world long-drive champions have used it to train.

The Jack Nicklaus course could easily tame the world’s longest hitters, too. It plays plenty long from the 6,457-yard “two tree” tees, equivalent to the white tees at most courses. Three of its par 5s rate as the hardest holes on the course, so that mitigates some scoring opportunities. You might not shoot your handicap, but you’ll still come away impressed by the whole experience.

My final night at the Donner Lake Village Resort was short and sweet as I woke up early to drive home. Next time I come back, I'll trade the golf clubs for a paddleboard or kayak and disappear on the lake. There's always more to do in Tahoe than anybody has time for.

Kira K. Dixon
Lifestyle Correspondent
Now Reading
Trip Dispatch: A golf binge bouncing around Lake Tahoe
New Cookie Policy
WE AND OUR PARTNERS USE COOKIES ON THIS SITE TO IMPROVE OUR SERVICE, PERFORM ANALYTICS, PERSONALIZE ADVERTISING, MEASURE ADVERTISING PERFORMANCE, AND REMEMBER WEBSITE PREFERENCES. BY USING THE SITE, YOU CONSENT TO THESE COOKIES. FOR MORE INFORMATION ON COOKIES INCLUDING HOW TO MANAGE YOUR CONSENT VISIT OUR COOKIE POLICY.
CONTINUE
Search Near Me