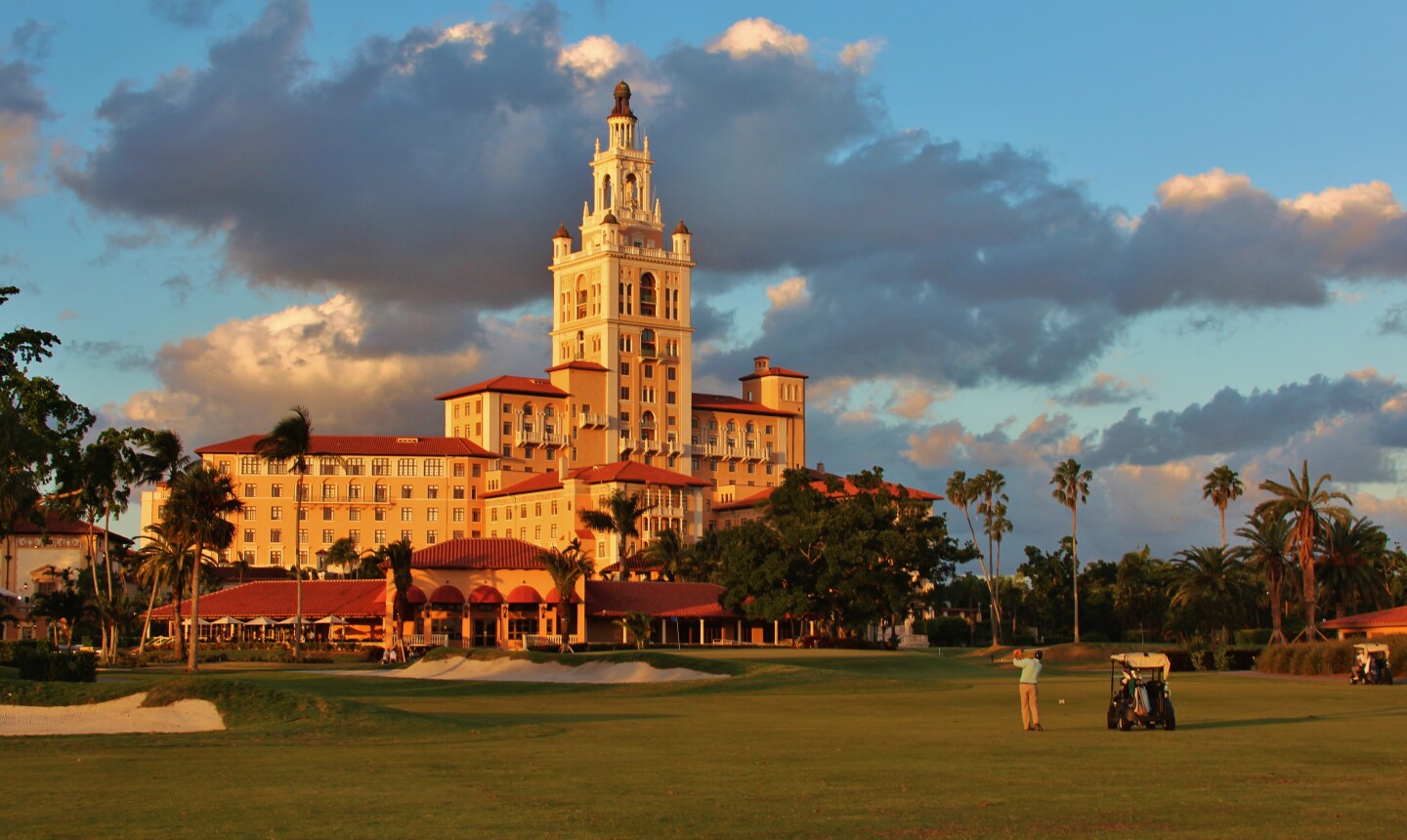 Trump National Miami Doral lost more than 1,500 trees - mostly on the Silver Fox and Golden Palm courses. During a round on the Red Tiger, I had to drive my cart around workers who were trimming branches from damaged trees. Down the road at the Biltmore Miami Hotel, piles of downed branches and debris not only lined several fairways of its Biltmore course, but the surrounding neighborhood as well. One report from CBS News indicated that some of the hurricane trash in Miami-Dade County might not be picked up until February.

On my final day of a recent six-day trip, I only finished 12 holes on the Biltmore golf course in Coral Gables before another deluge from another tropical storm ensued. My flight home was slightly delayed several hours later. It was Mother Nature's way of reminding me of the wet and wild hurricane season this fall. There is a silver lining in all this. Each of the five courses I played were in good to excellent condition, and, despite a slight cold spell that had the locals in layers, the weather couldn't have been better for golfers.

Big news brought me to South Florida for the first time in five years. I attended the media day announcing Greg Norman's Shark Experience, a new multimedia platform that will bring HD touchscreens and Bluetooth speakers to ClubCar carts at certain courses in 2018.

However, it was the old news that left me confident in the future of the game. Once golfers get a taste of a stay-and-play at historic places like The Breakers Palm Beach, Doral and the Biltmore, they'll be hooked on the game for life.

To be honest, I expected the resort to be half-empty when I arrived on a Monday night. Negative reports about business at other Trump golf properties, coupled with Doral's high prices, left me expecting gloom and doom like recent weather forecasts. To my surprise, the Champions Grill was hopping, busy with scores of families whose sons were playing in a college tournament on the Blue Monster the next morning.

Politics aside, the Trumps saved Doral, in essence throwing the resort a multi-million-dollar lifeline. When I visited in 2012 for the resort's 50th anniversary, turning 50 definitely did NOT look like the new 30. The whole place looked worn down, tired. While Donald Trump's penchant for elaborate fountains and marble doesn't work everywhere, it rejuvenated Doral, where his cash stripped every building down to the studs and started anew. Doral is back to being Doral again.

The multi-room villas, all eight named for legendary players, are elegant and comfortable. Classic photos of Arnold Palmer adorned the walls of the Arnold Palmer villa closest to the clubhouse where I stayed. The courses have all been refurbished by Gil Hanse with new grass and a cleaner look. With the college tournament going on, I played the Red Tiger, arguably the second-best course of the 72 holes at the resort. I made the mistake of looking at the card and thinking I would blister the place. Its 6,395 yards look so inviting until you step on the tees of six par 3s. No. 2 is a 231-yard beast, and no. 16 requires a harrowing 199-yard poke over water. It's a strong test, even with a 6-6-6 routing (six par 3s, six par 4s, six par 5s) that's conducive to scoring.

I came back later to tackle the Blue Monster. Anybody who doesn't play the white tees (6,334 yards) is a stud, or a fool. The Blue Monster has never been more menacing. Hanse added water and bunkers throughout during his 2014 remastering of a Dick Wilson classic. Its best defense remains its thick and wiry Bermuda rough. The pros - who played it from 1962-2015 - could show up tomorrow and still be twisted into pretzels.

Hanse did a bang-up job making the layout more engaging and the shot-making more defined. Certain holes - the stretch from nos. 8-11 and the drivable 16th hole - are that much more memorable, something I couldn't write with a straight face after two prior visits. And that famous finishing hole will always be iconic. Personally, I miss seeing Doral on TV. Maybe someday. Hopefully soon.

Norman's media event was held on Ocean Club at The Breakers, the oldest golf course in Florida. Ironic, no?

The Shark Experience - a partnership between Norman, Verizon, GPSi (a GPS company) and ClubCar - will be controversial to those who hold dearly to traditional golf. The Shark Experience allows golfers to listen to music from Slacker radio, watch sports live, devour online content and learn from swing tips by Norman. Call me clueless, but I'm a fan already. I like the music component - the built-in speakers rock out - and I would love to play on a Saturday while watching a big college football game. I'm already checking my smartphone for scores between shots. Why not enjoy the game live? I wouldn't use it at a Top 100 club I've been dying to play, but you can bet the music will be cranked for my next golf-themed high school reunion or bachelor party.

I don't think I offended the golf gods by using such innovative technology on one of Florida's odes to golf history. Golf wouldn't need all these gadgets if more courses adhered to the design principles of the 6,167-yard, par-70 Ocean Club. It's short, fun, fast to play, easily walkable, kept in great condition and manned by a friendly staff. That combination will solve most of golf's problems right there. After testing The Shark Experience, the media dined on the clubhouse deck upstairs at the Flagler Steakhouse, one of the great clubhouse restaurants in America.

The hotel across the street might be the finest building I've set foot in since visiting France's Palace of Versailles a couple years ago for a 2018 Ryder Cup preview. The two share a lot of the same characteristics - majestic ceilings, beautiful artwork and inspiring décor in every room.

The Italian Renaissance-inspired Breakers debuted in 1926 after the first two hotels on the property burned down. Seventy-three artisans from Italy completed the magnificent paintings on the ceilings of the lobby and first-floor public rooms in less than a year. Talk about playing fast.

With four pools and an ocean right outside the back door, it's easily the best setting of golf's most historic hotels not named Pebble Beach. Dining at the extensively renovated Seafood Bar at the hotel - home to the world's largest aquarium bar - and Echo, I felt obligated to visit the fitness center. Not a bad idea considering my treadmill overlooked the ocean (and for you Shark Experience haters, a screen plugged into live TV).

After checkout, the going-away present was just as rewarding. I drove the 11 miles inland to discover the Breakers Rees Jones Course. It ranks among my top 10 favorite courses in the state. The par 3s are priceless and the approaches over water dangerously enticing. I could play all day every day and not get bored.

The Biltmore in Coral Gables is the grittier version of The Breakers. It's just as historic, although with a more troubled past. It's also beautiful, despite less Palm Beach glitz. The 273-room hotel opened a year after its Donald Ross course in 1926. For the longest time, it was the life of the party, attracting the social elite from all corners of the country.

During World War II, it was converted into a military hospital and eventually its health declined. The Biltmore was eventually deeded to the city, sitting unoccupied for a decade in the 1970s-80s. Since its reopening in 1987, more than $100 million has been spent by several owners to salvage its storied past. Thankfully, much of the hand-painted frescos on barrel-vaulted ceilings, travertine floors, marble columns and leaded-glass fixtures have survived, so guests can enjoy them today.

Stays can include breakfast buffet in an open-air courtyard, which transforms into the glamorous, Italian restaurant Fontana by night. As I dined by myself, I recall looking up at the stars thinking this would be a romantic spot to celebrate a special occasion. Alas, the travels of the lonely travel writer...

The Biltmore is open to the public, so that keeps prices down and activity up. It's also the home course of the University of Miami women's golf team. The big news is that the resort has landed Jim McLean to head up its new and improved golf school. Rick Smith, Phil Mickelson's old coach, will replace McLean at Doral. That's two heavyweight instructors setting up shop within 10 miles of one another. If nothing else, the moves show golf's power and influence in Southeast Florida and the allure of each resort.