What other courses should the USGA designate as U.S. Open 'anchor sites'?

Pinehurst No. 2 and Oakmont are in. What other great championship venues will join them?

If you needed any reassurance about Oakmont Country Club's fitness for big championships, this past weekend should have helped. As always, it wrung great golf out of an elite field, hosting its record-tying sixth U.S. Amateur to go along with its 10 turns as U.S. Open host (including the 2010 U.S. Women's Open). It is unquestionably one of America's best tests of high-level golf.

Oakmont joins Pinehurst No. 2 on the growing U.S. Open anchor site list. The North Carolina jewel in the career of architect Donald Ross will host the 2024, 2029, 2035, 2041 and 2047 U.S. Opens. The USGA is also building a second headquarters nearby.

You probably see what's happening here. The USGA is slimming down the number of courses to which it is bringing its flagship events. This is smart for two reasons. First, it confirms a point that architecture buffs have long shouted from rooftops and bunker bottoms: that the best golf courses make for the most interesting viewing. Both Pinehurst and Oakmont mix raw difficulty with strategic propositions in ways that will always be relevant for the best golfers, no matter the situation with equipment. They have history, geography, name-recognition and infrastructure on their side, making the idea of returning to them often for championships attractive to both the USGA and fans, who will have the benefit of getting to know these courses over the long arc of a golf-obsessed life.

This last point dovetails with the second reason why this is a wise move by the USGA. Some may chuckle at the notion of scheduling U.S. Opens whose winners may well not yet be born, but it suggests that the organization that has led golf in this country for more than 125 years has a plan that looks well down the road. When I texted my father about the USGA awarding the 2050 U.S. Open to Merion (along with 2030), he responded "please get me a ticket," announcing his full intention to be alive to see it when he is 102 years old and I am 61. Like a long-awaited bucket-list golf trip, that is a nice eventuality to think about.

The USGA is standing pat at two anchor sites for now, but it is all but certain that more will be announced eventually. How many will there be? Where will they be? Let's speculate a bit, shall we?

You'll see where my head's at below, but as of now, here's what I think a future U.S. Open 'rota' might look like:

You'll notice there's some geographical variety in both above categories. As both a golf history nut and a plain-old sports fan who loves watching the best players play at the highest level, a future where the U.S. Open travels between these courses would make me very happy.

Here's why I've placed the courses above into their respective buckets.

Can we divine the USGA's intentions as to the size and nature of a future U.S. Open rota from the way their anchor sites' championships have been staggered? After just a five-year gap at the end of this decade, Pinehurst will settle into a six-year cycle. Does that mean we can expect a six-course U.S. Open rota to emerge by mid-century?

The numbers surrounding Oakmont's future U.S. Open appointments point to something similar, with tapering gaps between its future assignments: a nine-year wait from '25 to '34, eight years to '42 and seven years to '49.

Why the tapering? Given the more freewheeling recent schedule of U.S. Open host golf courses, it would be a bit of an abrupt shock to suddenly lop off the rest of the hopefuls and institute a tighter core group. Plus, American championship golf is plentiful enough that occasional departures from the emerging rota will still be welcome by both fans and host clubs themselves, especially if such honors will inspire non-rota courses to continue to agree to host other USGA championships down the line. If a reliable half-dozen courses by the 2050s is the goal, there is still plenty of opportunity to honor those who don't end up making the cut over the next 30 years.

With Pinehurst and Oakmont locked in, the USGA has set anchor sites in the Southeast and Mid-Atlantic. In the Northeast, two obvious candidates are Winged Foot and Shinnecock Hills. Even though the two courses are less than 100 miles apart, they are unique and worthy of regular U.S. Open hosting duty, if desired. It's not clear whether The Country Club in Brookline, Mass., which hosts next year's championship for the first time since 1988, desires anchor-site status.

In New Jersey, Baltusrol has hosted 15 USGA Championships and its Tillinghast classic Lower Course is looking great since its Gil Hanse-led restoration, but of late it has leaned more toward the PGA of America, having hosted the 2005 and 2016 PGAs. That said, the 2018 U.S. Junior Amateur visited the New Jersey club, so perhaps that puts it back on the U.S. Open path.

In the Southeast, I don't foresee any courses south of Pinehurst getting U.S. Open nods anytime soon, especially since the PGA's May dates are a little more friendly to the climate. Plus, with the PGA of America taking up residence in Frisco, Texas and hosting occasional future championships there, it seems to make sense to keep the U.S. Open to somewhat more northerly latitudes.

In the Midwest, one club jumps straight to mind: Oakland Hills, whose "Monster" South Course also just reopened from a multi-million-dollar restoration effort courtesy of the new U.S. Open Doctor. It hosted six U.S. Opens from 1924 to 1996, and is ready to host again (thanks, also, to some recent work by Hanse). 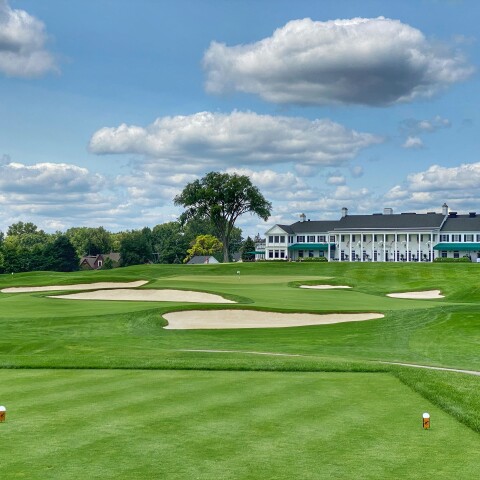 Articles
What lies under the 'Monster'

Chicago is deserving of major-championship golf, and with the Australian firm of Ogilvy, Cocking and Mead set to renovate Medinah Country Club's No. 3 course in the next couple years, it could be a contender to host its first U.S. Open since 1990, although it has been more of a PGA of America darling of late (2012 Ryder Cup, 2006 PGA. Championship). Don't forget about 2003 U.S. Open host Olympia Fields, whose North Course hosted a dramatic 2020 BMW Championship finish. The club has hired architect Andy Staples to work on its South Course, and if a North Course project follows, it could position the club for future major championships.

Inverness is coming off its own restoration - by Andrew Green - and could re-enter the picture if this year's Solheim Cup goes well. But it doesn't have quite the infrastructure that Oakland Hills boasts, and metro Toledo isn't quite metro Detroit.

Erin Hills hosted the 2017 U.S. Open and continues to host USGA events (next up: the 2022 U.S. Mid-Amateur), but especially with Oakland Hills back in the mix, Erin Hills feels like the odd course out at this point, though I personally would enjoy seeing it get another crack at hosting someday.

Finally, out west, Pebble Beach Golf Links seems like a lock to become an anchor site. Its next U.S. Open is scheduled for 2027, and the California bucket-list resort darling has never gone more than 10 years without hosting the national championship since its first turn in 1972. Bet on that streak to continue.

Of all the U.S. Open venues scheduled this decade, Los Angeles Country Club's North Course is the one I am most excited to see, having loved watching the 2017 Walker Cup it hosted. George Thomas is famous for his design of Riviera, and by many accounts, L.A.C.C. is even better. But as a first-time U.S. Open host, it is hard to tell whether there will be mutual interest in a second, much less a willingness to become part of a future rota.

Finally, what about the West Coast's two recent muni U.S. Open hosts? Torrey Pines South, though architecturally imperfect, has produced two very memorable 21st-century U.S. Open finishes. Does that augur a future where it hosts more often? It would be good to circle back to a muni at least once a decade.

Chambers Bay is idiosyncratic in its own ways, but the Pacific Northwest nevertheless turned out in force for the 2015 U.S. Open, and the transition of the greens from fescue to poa annua grass should mean much better conditions for future events. It received positive reviews during this year's U.S. Four-Ball Championship, and will get another test when it hosts the 2022 U.S. Women's Amateur. It seems to be working its way back into the overall USGA rotation. A future U.S. Open would be a boon, but is it a realistic ceiling with all the competition for what seem to be shrinking regular spots?

With the USGA armed with both a willing group of all-time-great host venues and a plan that looks decades into the future, the coming years should only increase the standing of the U.S. Open, not just among prospective contestants but the millions of golfers who are eager to watch at home every June.

Which of these (or other) courses would you most like to see become part of a future U.S. Open rota? Let us know your thoughts in the comments below!

Why is Bethpage Black not on the list?
Great Venue!

Bethpage is more aligned with PGA of America events nowadays, as evidenced by the 2019 PGA and 2025 Ryder Cup. The USGA already has Winged Foot and, potentially, Shinnecock so it's set for NY courses already.

I would love to see it come back to Olyimpia Fields. I know it got a bad rap because the rough did not grow as fast and high as they wanted it to, in 2003, because the weather did not cooperate. But maybe I'm biased living outside of Chicago?

Tim Gavrich
Senior Writer
Now Reading
What other courses should the USGA designate as U.S. Open 'anchor sites'?
Search Near Me