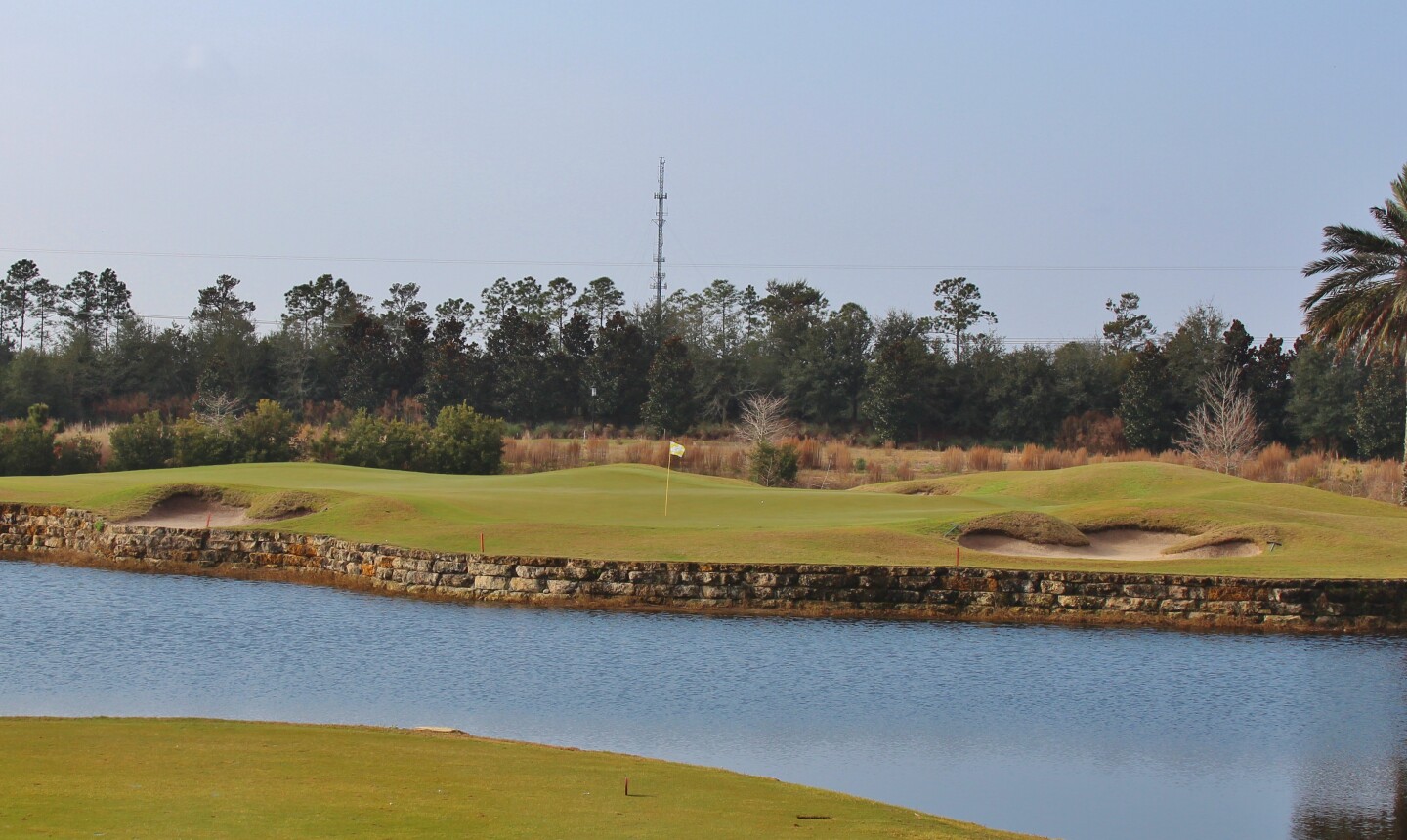 The 18th green of the Conservatory Course at Hammock Beach Resort shimmers in the morning sunrise. Jason Scott Deegan/Golf Advisor 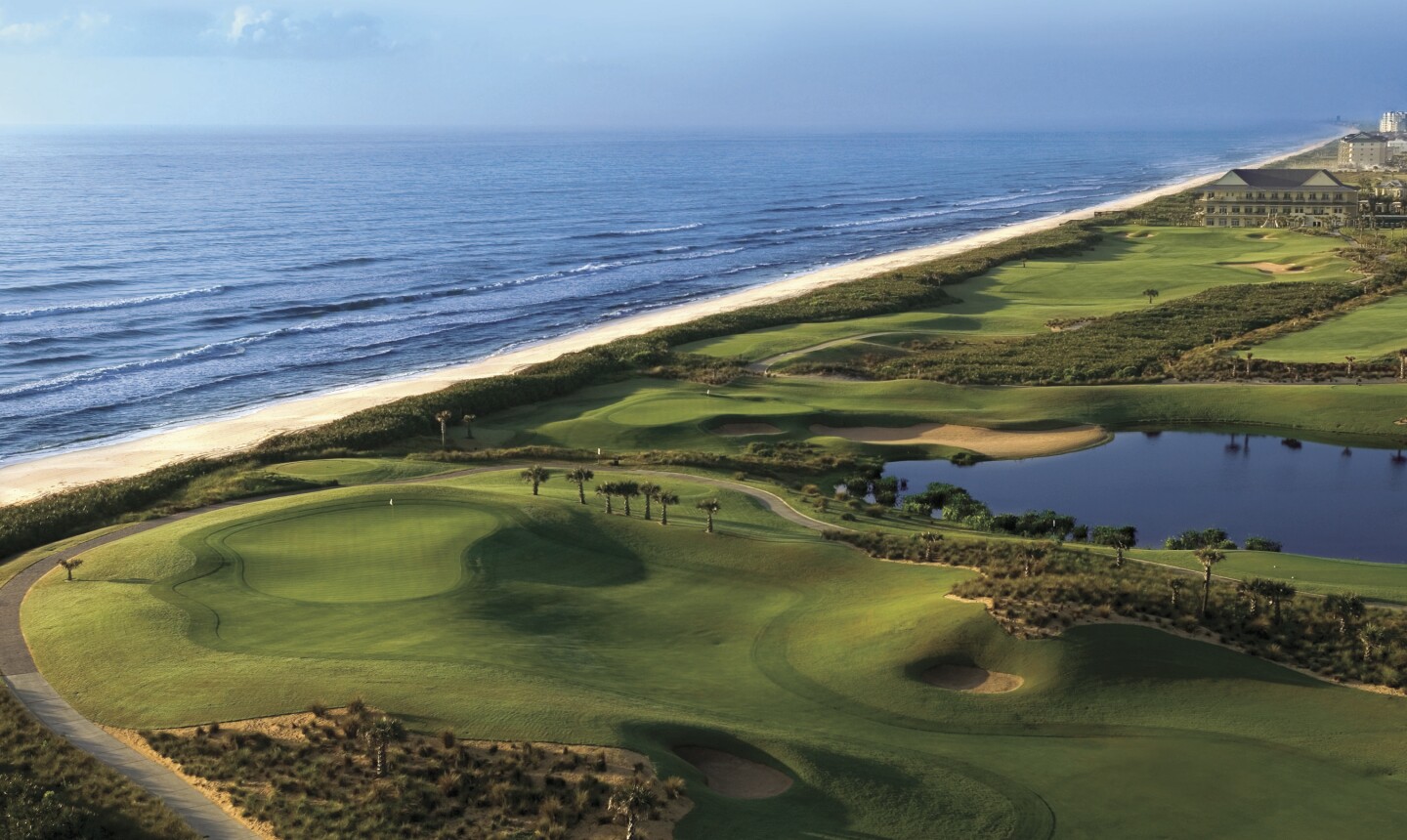 PALM COAST, Fla. -- Somewhere between the marketing hype of ocean holes and the imposing shadow of one of Jack Nicklaus' best designs, the Conservatory Course got lost in the shuffle at Hammock Beach Resort.

The Conservatory, a bold design by Tom Watson 30 minutes north of Daytona Beach, is every bit as good as the more heralded Ocean Course designed along the Atlantic Ocean by Nicklaus. In 2012, Golf Magazine ranked the Ocean Course No. 78 among its top 100 you can play, although some believe the unrated Conservatory Course could be even better.

If this were a rematch of "The Duel in the Sun" -- an epic battle between the two golf titans during the 1977 Open Championship at Turnberry -- Watson might upend Nicklaus again.

"The Ocean Course, it's pretty good, but I'm not sure it is as good as the Conservatory," said Kevin Helm, the executive director of the Michigan PGA Section, after hosting a pro-am at the resort in January. "You've got great views of the water [on the Ocean Course]. The Conservatory, it's big and unique and the bunkering is dramatic."

Both have hosted pro tournaments. Ryan Palmer won the PGA Tour's Ginn sur Mer Classic on the Conservatory, the longest course in Florida at 7,776 yards. Champions Tour players Bernhard Langer (2008) and Keith Fergus (2007) each won a Ginn Championship at Hammock Beach on the Ocean Course.

Let's look at each of their strengths.

The Conservatory opened in 2006, peppered with more than 140 bunkers, including sandy waste areas. Watson added three sod-faced bunkers as a tribute to his love of links golf (he won five British Opens). The layout's natural setting and the palatial Mediterranean-themed clubhouse look marvelous.

It's the rhythm of the round that makes the Conservatory so fun to play. There are no throwaway holes. For every meat grinder -- the par-4 14th plays 452 yards from the blues -- there is a breather. The short par-4 15th hole serves up a risk-reward 350-yard test from the blues.

The par 5s are particularly strong, highlighted by the final hole of each nine. Water creeps up the entire right side of the ninth fairway. A giant pot bunker must be avoided off the tee of the par-5 10th hole, followed by a waste bunker that dissects the fairway near the green. Huge ridges regularly serve up three-putts on the ninth and 18th greens.

The Ocean Course opened in 2000 to much fanfare, considering how few Florida courses actually sniff the Atlantic Ocean. Nicklaus built up the tees and greens of the six oceanfront holes -- Nos. 8-9 and 15-18 -- to provide glimpses of the crashing surf and beach, which is protected by large dunes. The 7,201-yard course actually boasts a nice mix of interesting holes along the way, but the finishing holes are what golfers remember.

The final four holes are nicknamed the "Bear Claw," a tribute to the Golden Bear that might be even more challenging than the "Bear Trap," holes 15-17 on the Champions Course at PGA National Resort & Spa made famous by the PGA Tour's Honda Classic. The wind can really howl, making the final foursome play even more fearsome late in the day for afternoon groups.

Always take at least two extra clubs hitting into the elevated green at the par-4 15th hole. It plays directly into the breeze. A ribbon-thin fairway makes the short par-4 16th hole tougher than the yardage suggests. Yard for yard, the tee shot of the par-3 17th hole might be the toughest on the course. The long finishing hole feels more like a par-4½ because of an elevated green.

So, what's the top course at Hammock Beach Resort?

I'm in the minority on this one, but I'm steadfast in my belief that the Conservatory is a hair better than the Ocean. The Conservatory immediately jumped into the top tier of Florida golf courses I've seen when I played it for the first time in January. It's more playable for high-handicappers than the Stadium Course at TPC Sawgrass but just as tough, if that makes sense. Watson's dynamic green complexes and bunkers, complemented by intriguing putting surfaces, put the Conservatory over the top. 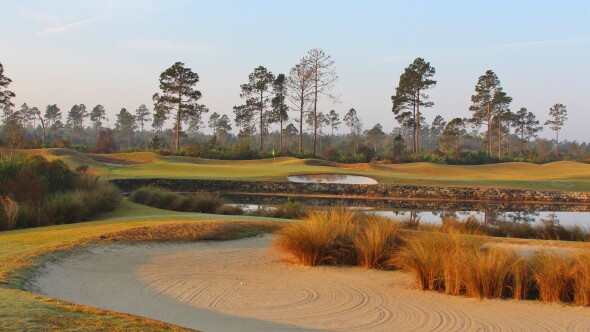