Where to play great public golf around Louisville, home of the 2014 PGA Championship 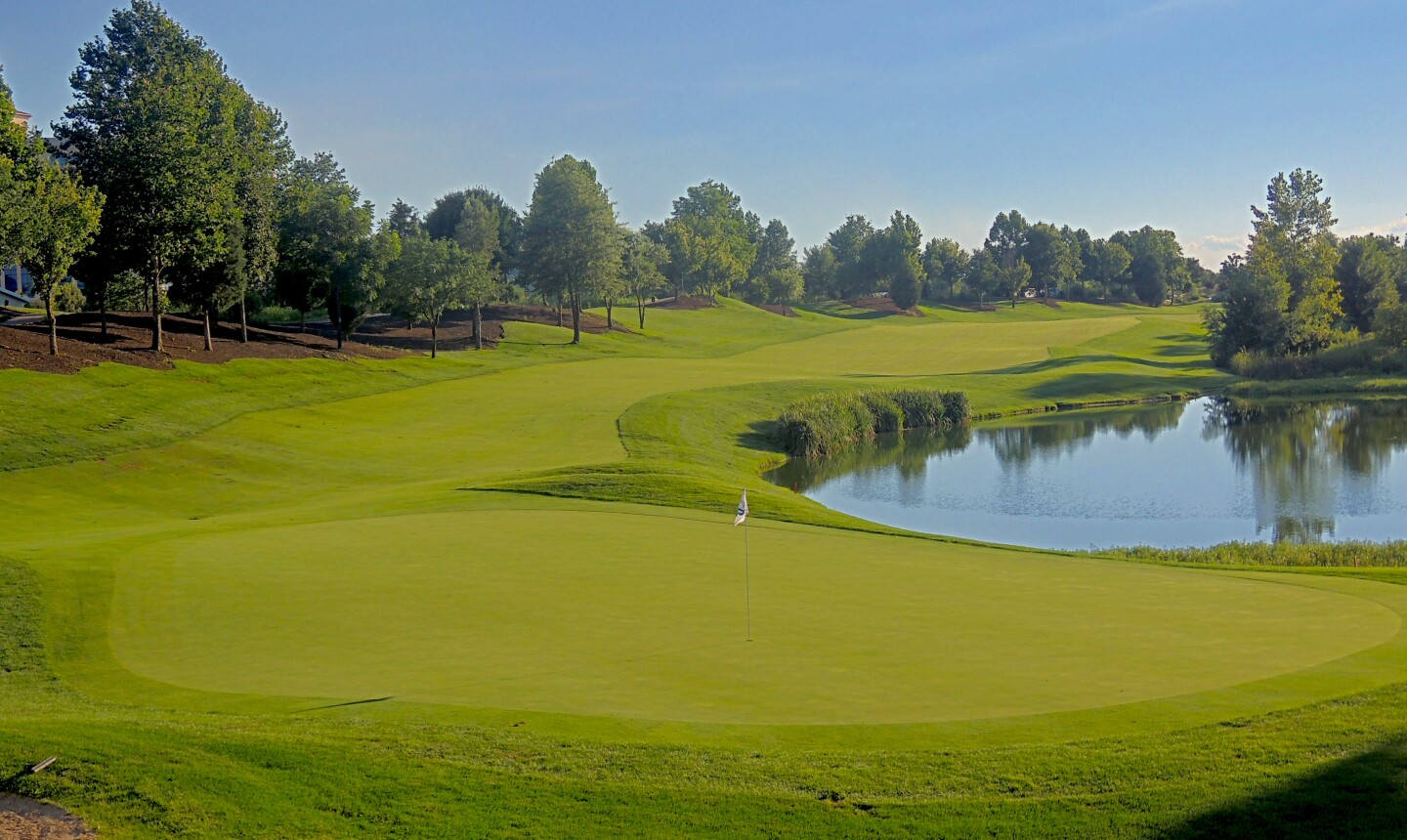 An hour from Louisville is the Tom Fazio-designed Belterra, part of a casino resort. Mike Bailey/GolfAdvisor 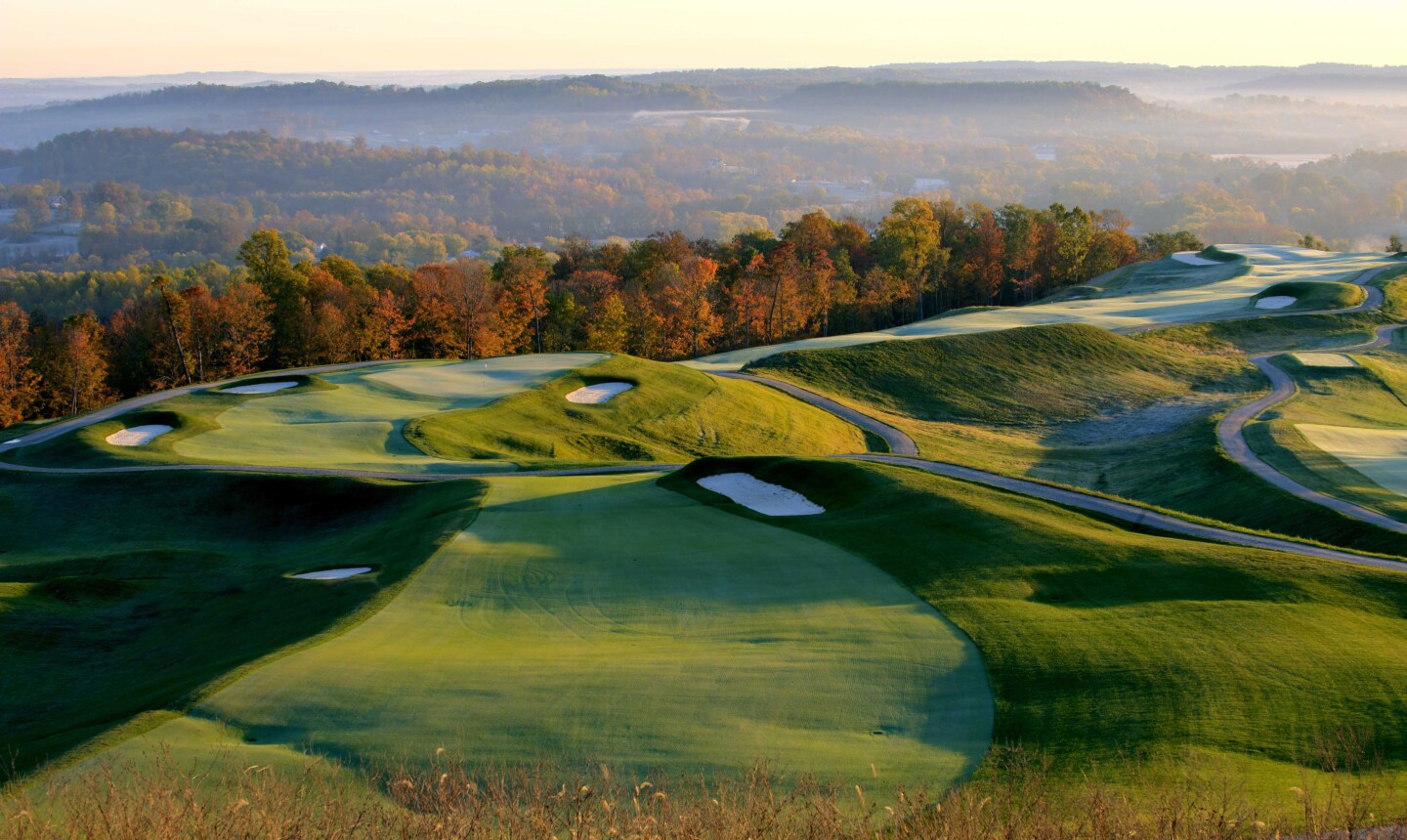 The 456-yard 11th hole on the Dye Course at French Lick Resort runs along the spine of a ridge. Courtesy of French Lick Springs Hotel 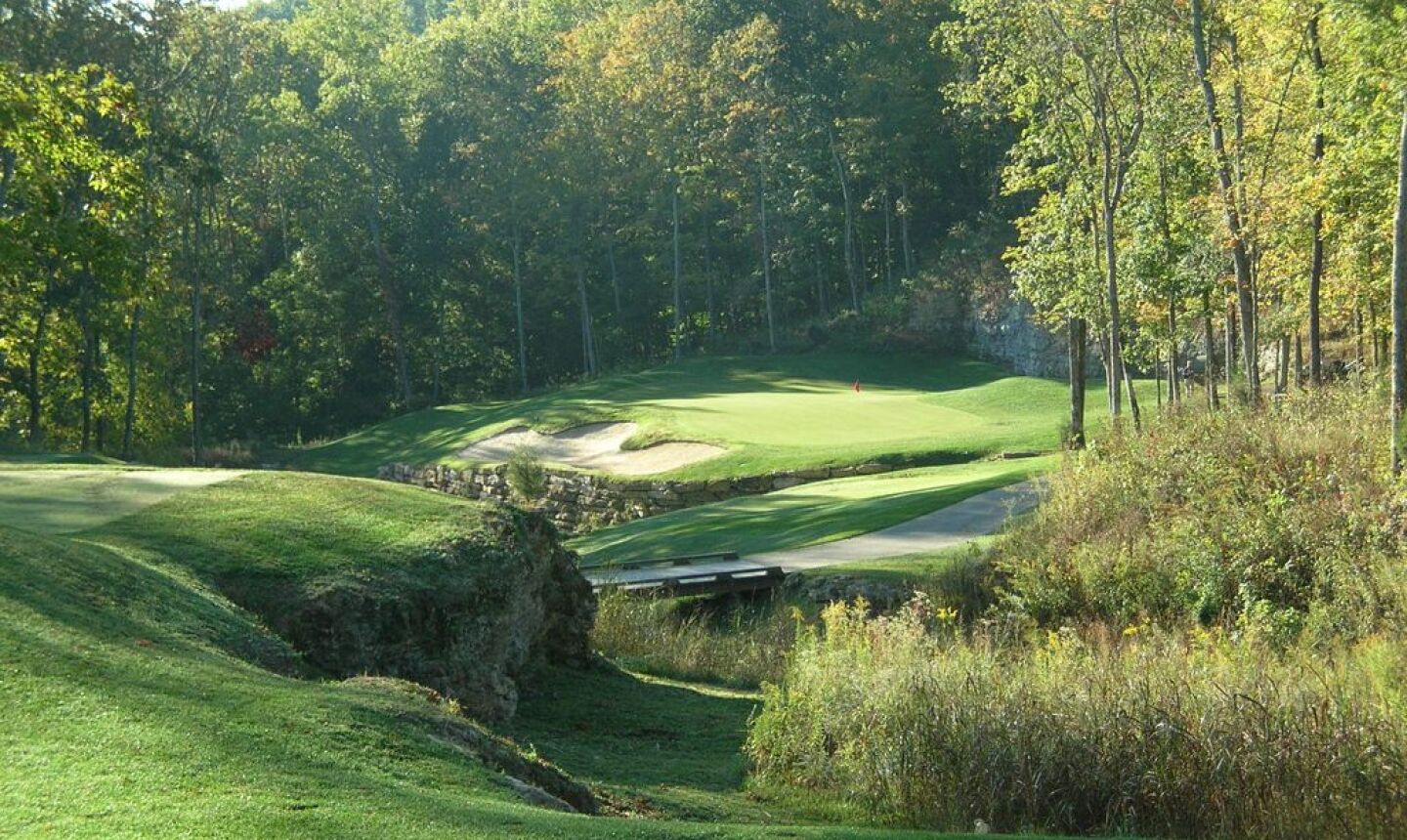 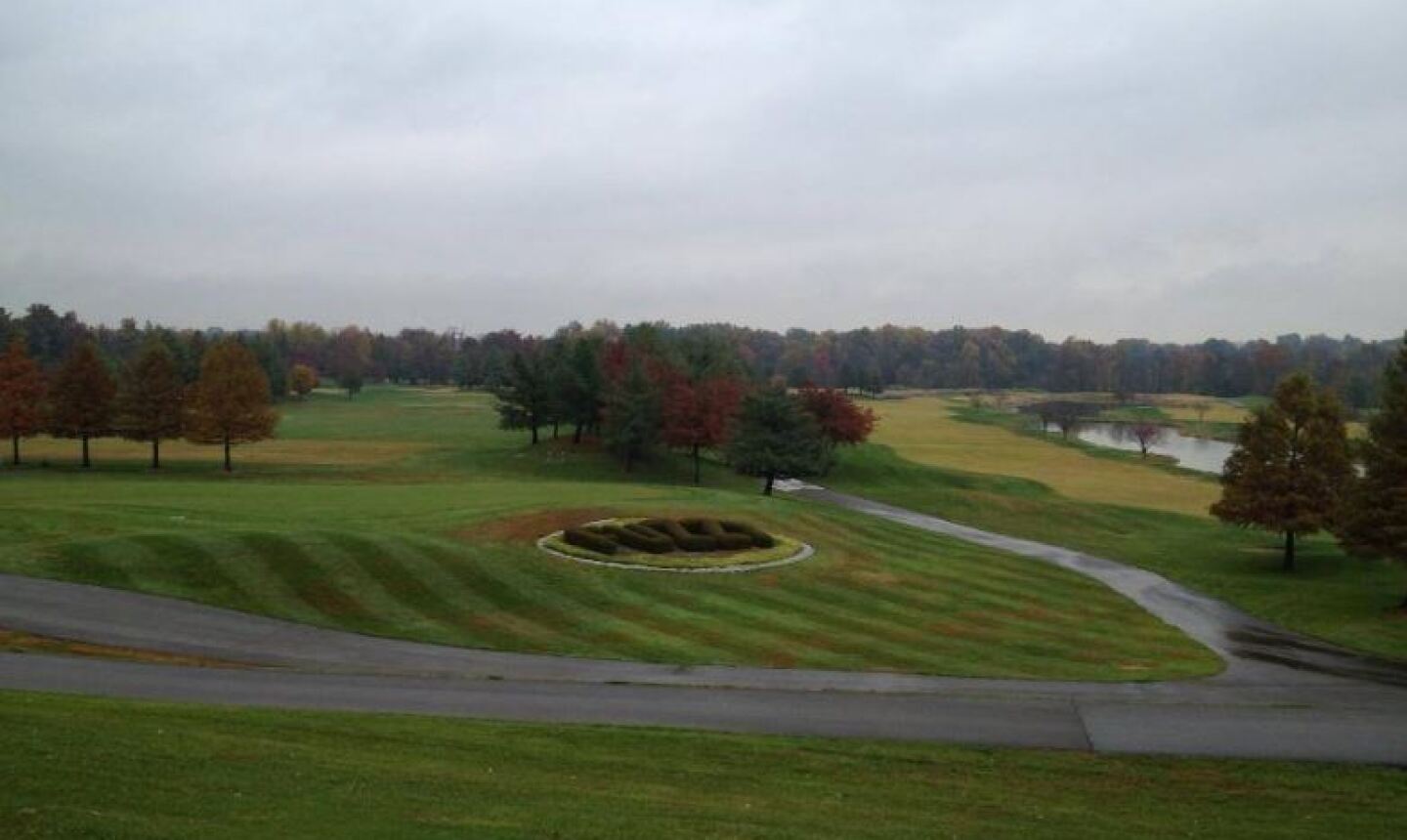 The state of Kentucky knows hoops and horse racing, but don't forget the golf scene, particularly in the city of Louisville.

The PGA of America owns and operates Valhalla Golf Club, a Jack Nicklaus signature design and home of the 2008 Ryder Cup Matches and the 2014 PGA Championship. Valhalla is such a stellar venue for competitions that PGA of America President Ted Bishop recently suggested it could be the full-time host of the Ryder Cup Matches when staged in the U.S. For golfers, while it will take PGA connections to play it, there are numerous other suitable options in the area.

Even better news, golf courses in and around Louisville area are all highly affordable, as practically all of the top-notch daily fees and resort courses can all be played in the $50-$75 range.

Look no further than area native Fuzzy Zoeller to seek out some of Louisville's favorite daily-fee courses. Zoeller, a native of New Albany, Ind. -- located on the other side of the Ohio River -- owns two area courses, both of which he co-designed with architect Clyde Johnston: Covered Bridge Golf Club and Champions Pointe Golf Club.

"I am already planning a golf trip back here with my golf buddies," wrote GolfAdvisor user semaj2k3, a golfer from Arlington, Texas, visiting the course while on a business trip. "This is a MUST-PLAY COURSE!"

Another top-rated option at a slightly lower price point is Heritage Hill Golf Club, one of the area's newest courses, opened in 2008. The course was designed by a former Jack Nicklaus design associate Doug Beach and can stretch over 7,100 yards across rolling and forested terrain.

"Best value in the Louisville area," wrote GolfAdvisor.com user Jaeporter69, who played it early in the 2014 season and was surprised at how good the greens were already rolling.

If you want affordable, convenient public golf, follow the locals to one of nine Metro Parks courses of Louisville. Charlie Vettiner Golf Course and Seneca Golf Course are the two top options, yet they top out at just $16.50 to walk on the weekend.

Riverboat gaming is abundant along the Ohio River, and golf has been a huge beneficiary.

If you're up for a drive about 30 miles south of Louisville, check out Chariot Run in Laconia, part of the Horseshoe Southern Indiana Casino. Equestrian-themed, the course is a top public facility and earns high marks on GolfAdvisor for value at weekend rates less than $70.

The Ohio Valley received a big boost to its resort offerings when the historic French Lick Resort beefed up its accommodation's golf options with the addition of a brand new, incredible Pete Dye design in 2009. The Dye Course at French Lick rolls across some of the state's highest ground, providing views for miles around.

You may want to keep your eyes on the horizon, as the course itself is tough as nails, worthy of hosting some of the top amateur events in the past few years. Also at the resort, golfers can play a very reputable Ross Course, one of his toughest, and a former host to the PGA Championship. The course will celebrate its centennial in 2017, but French Lick's history dates back even further. The marvelous and historic West Baden Hotel was built in 1902.

An hour in the opposite direction along the Ohio River is one of Tom Fazio's great casino courses, Belterra Casino Golf Club, located about halfway between Louisville and Cincinnati. This is one of the most affordable and accessible Fazio designs anywhere, particularly when you consider he's built such other high-profile casino courses such as Shadow Creek and Fallen Oak.

You'll save plenty of dough on green fees at Belterra, or any course around Louisville for that matter, comparatively. Enough to put a few bucks on a pony or two. 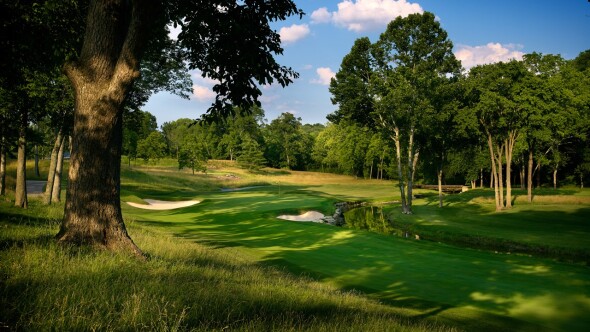 Articles
1 Min Read
Get to know Valhalla Golf Club
Here's a guide to the Jack Nicklaus-designed Valhalla Golf Club in Louisville, Ky., host of this week's 2014 PGA Championship as well as the exciting 2008 Ryder Cup. 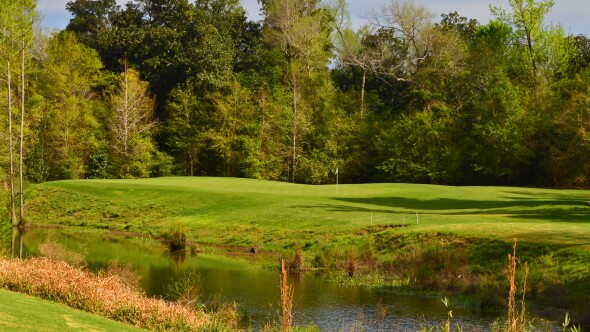 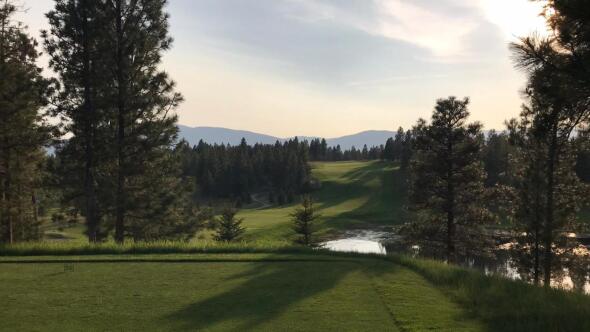 Kira K. Dixon
Lifestyle Correspondent
Now Reading
Where to play great public golf around Louisville, home of the 2014 PGA Championship
New Cookie Policy
WE AND OUR PARTNERS USE COOKIES ON THIS SITE TO IMPROVE OUR SERVICE, PERFORM ANALYTICS, PERSONALIZE ADVERTISING, MEASURE ADVERTISING PERFORMANCE, AND REMEMBER WEBSITE PREFERENCES. BY USING THE SITE, YOU CONSENT TO THESE COOKIES. FOR MORE INFORMATION ON COOKIES INCLUDING HOW TO MANAGE YOUR CONSENT VISIT OUR COOKIE POLICY.
CONTINUE
Search Near Me