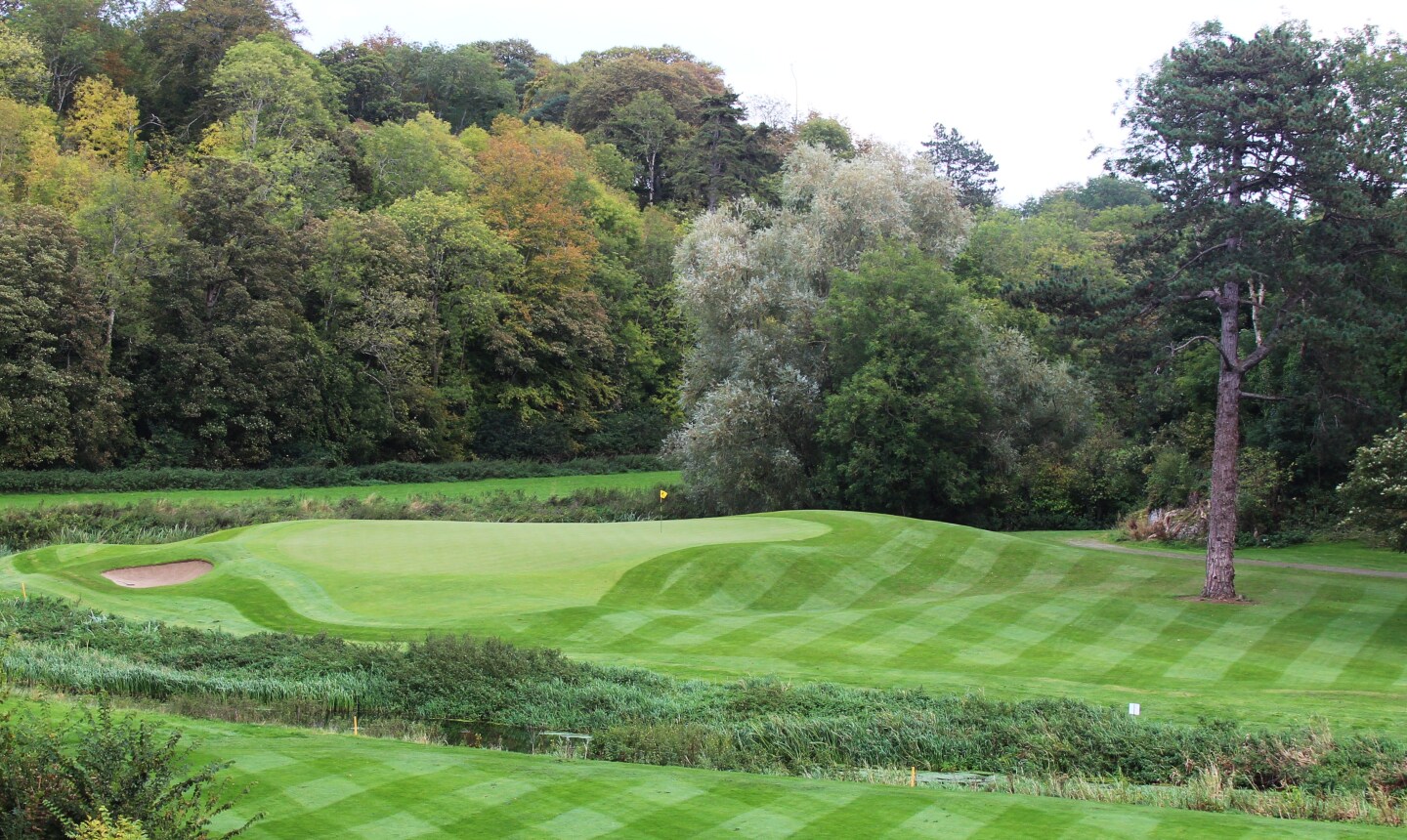 No. 14 on the O'Meara Course at Carton House G.C. kicks off a grand, three-hole loop in a valley. Jason Scott Deegan/Golf Advisor 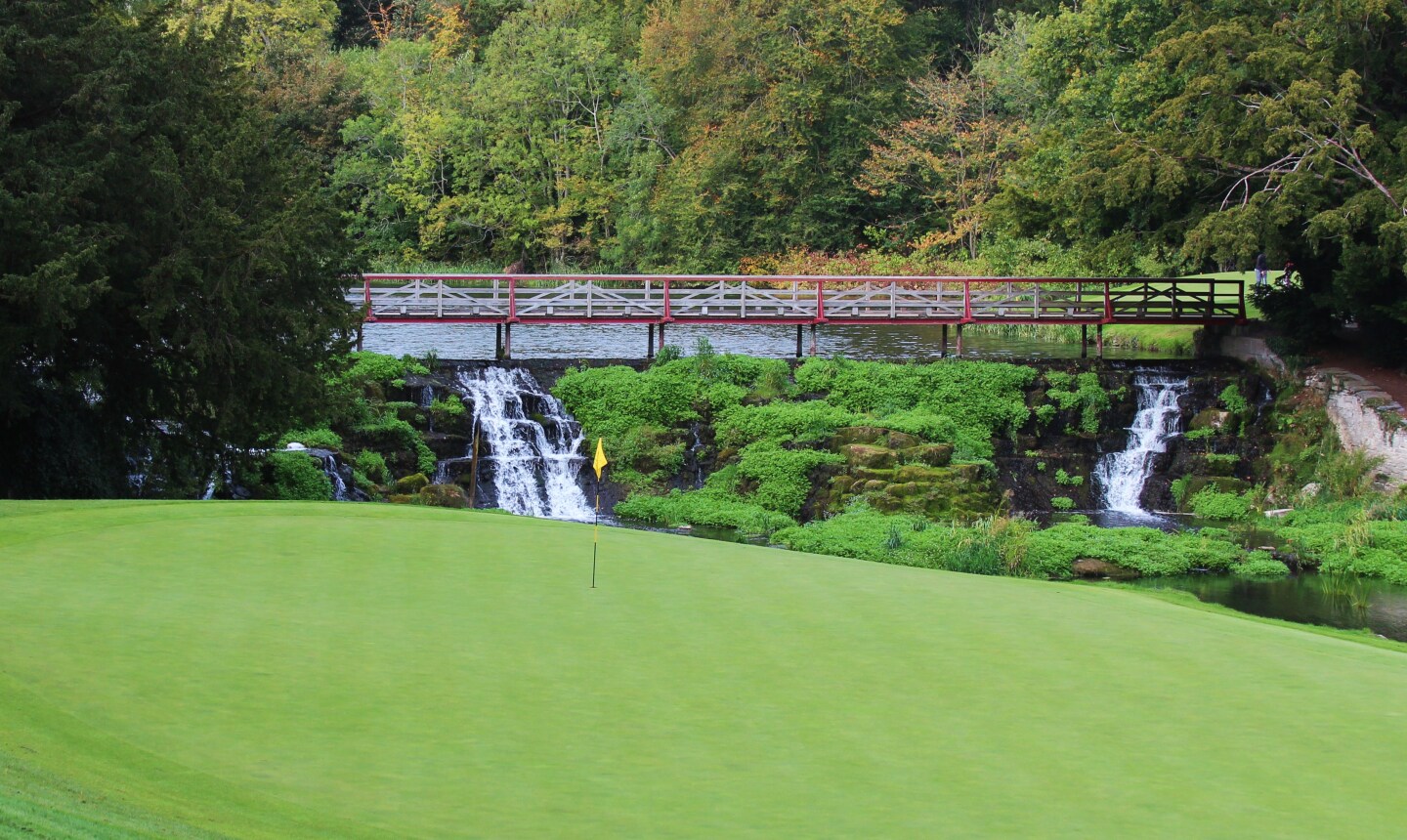 The setting is sublime on the par-5 15th hole on the O'Meara Course at Carton House Golf Club. Jason Scott Deegan/Golf Advisor 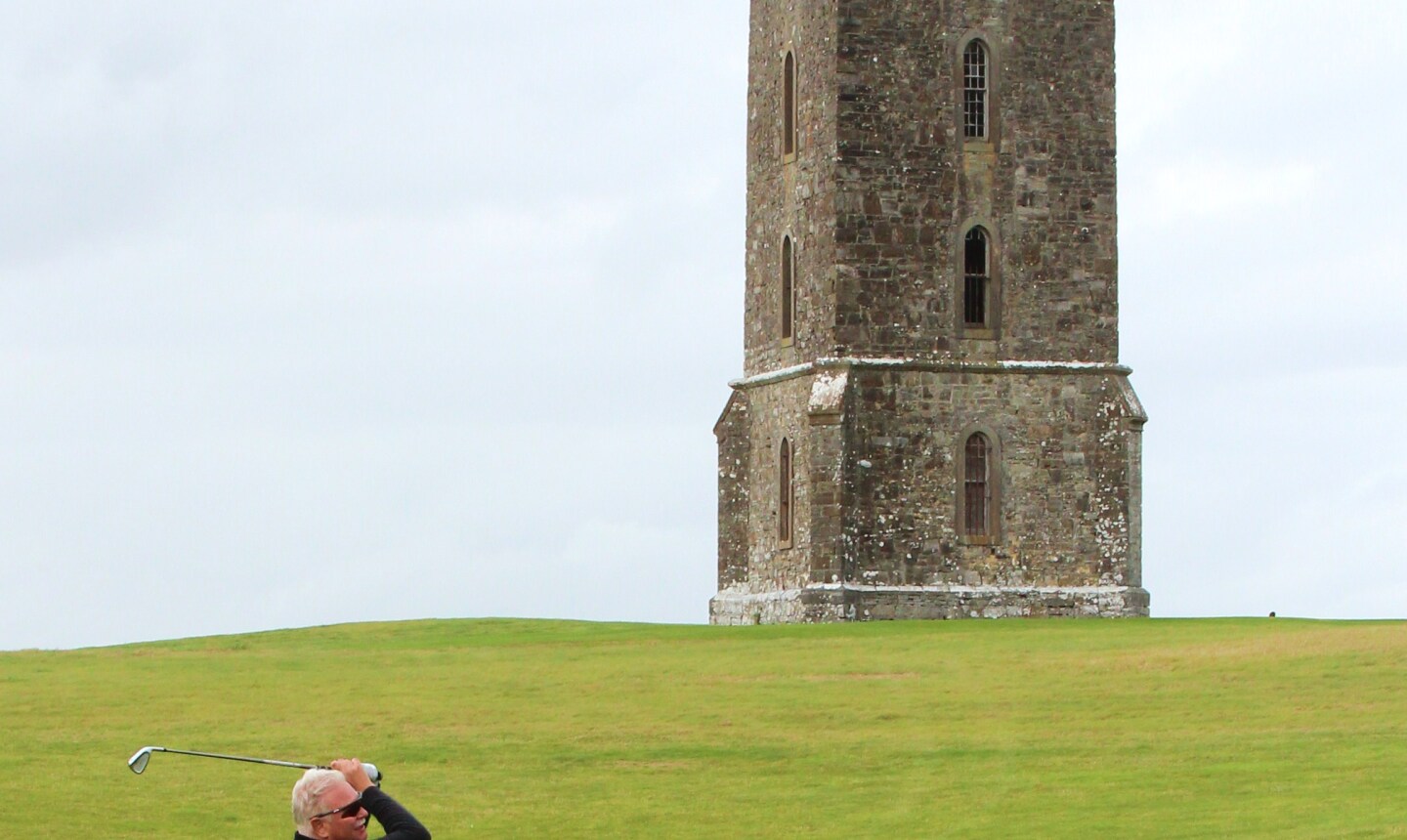 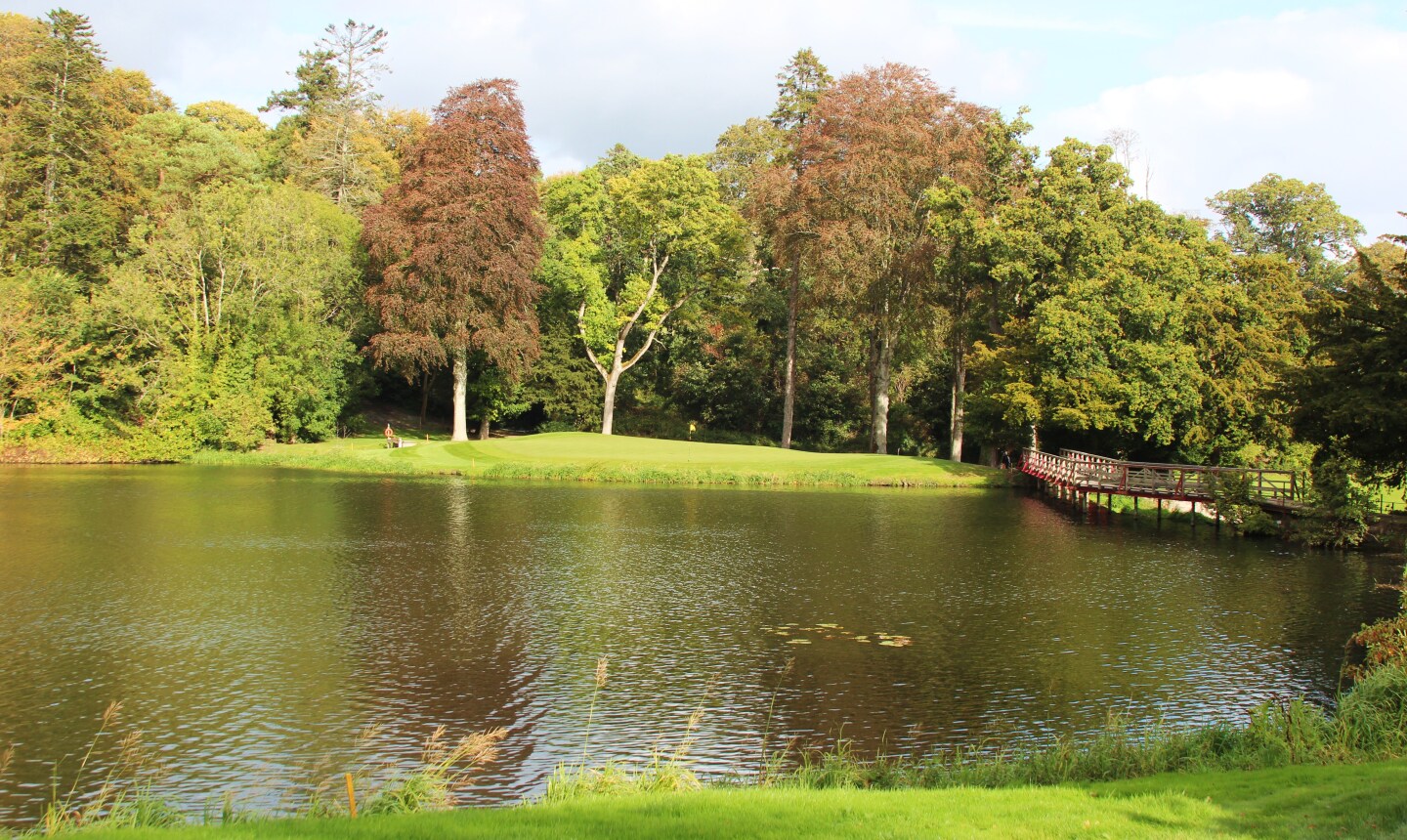 Golfers don't discover it until they walk down the path leading to the 14th tee. Turning the corner reveals a stirring sight, an elevated tee leading downhill to a green nestled in a grove of trees. The Rye River, a tributary of the River Liffey, wraps around the front and back. It's the start of a magnificent three-hole stretch that Carton House Director of Golf Francis Howley calls "our Amen Corner."

This river valley, just 15 miles outside Dublin in rural Irish countryside, has a magical feel. It's as if you have slipped down a golf hole and ended up in golf's version of "Alice in Wonderland."

"Those three water holes can ruin any round," said Andy McEntee, an Irishman who teed it up recently. "The par 5 is beautiful. To walk those holes, there is therapy in there."

Mark O'Meara designed his 7,006-yard course in 2002 to be the good twin at Carton House -- with the Colin Montgomerie Course playing the evil one.

The O'Meara fairways roll out as wide, generous welcome mats, although the greens can be quite tricky. The land dances up and down in the shadow of a stone folly. The front nine feels a bit uninspiring until things get interesting at the par-4 12th hole.

Back in the river valley, the tree-lined 15th bends hard right. The river sneaks up the left side and crosses the front of the green, making an opportunity to go for it in two almost impossible. Waterfalls flow under the access bridge to the putting surface. The next hole plays 180 yards back over the river to a bunker-less green. The O'Meara finishes strong with an uphill 18th hole over a rock face.

The other golf course, designed by Montgomerie in 2003, is more highly regarded by critics. Yet the O'Meara remains Carton House's glamour girl.

"The corporate and leisure golfers like the O'Meara. It is more scenic," Howley said. "As the O'Meara's mature trees grow, it will get better. As the years go by, it could be our No. 1."

Carton House's Montgomerie Course mimics a dangerous minefield littered with 130 cavernous bunkers. Todd O'Reilly, an assistant golf professional at Westport Golf Club in Ireland, said every time you find a bunker, it adds a stroke to your score. He called the 7,301-yard layout "in your face."

"It's tough," O'Reilly said just moments after finishing. "It's in great shape. It very much has a linksy feel. There are lots of bunkers. They are like craters on the moon."

Howley estimates the course plays a couple shots harder than the O'Meara. "The more you play (the course), the better you can plot your way around," he said. "First timers get caught in some bunkers."

Like an engine on a cold morning, Carton House Golf Club's O'Meara Course sputters a bit to start, But the course roars to life on the back nine.

The "Amen Corner" is as good a three-hole stretch of parkland golf as Ireland offers.

Stay and play at The Carton House

The Carton House, a magnificent cut-stone Georgian mansion, houses 165 rooms and suites. A major multi-million dollar investment by current owners Lee and Mary Mallaghan transformed the house into a hotel in 2006.

Carton House was commissioned in 1739, contained within a 1,100-acre estate surrounded by walls. Architectural treasures can be discovered throughout its interior. The Gold Salon soars two stories to a coved ceiling with plasterwork depicting the "Courtship of the Gods." The Chinese Boudoir looks equally stunning with Chinese paper decorating its walls.

Three restaurants, a leisure center and spa complete this full-service retreat. The resort also serves as the national training academy for the Golfing Union of Ireland, a program for elite juniors that has nurtured the careers of Padraig Harrington, Graeme McDowell and other Irish pros.

"It's more than just a hotel and a golf course," Howley said. "We call it the Carton experience. It's got the complete package. It is one of the top resorts in Ireland, if not the top, because of the facilities. 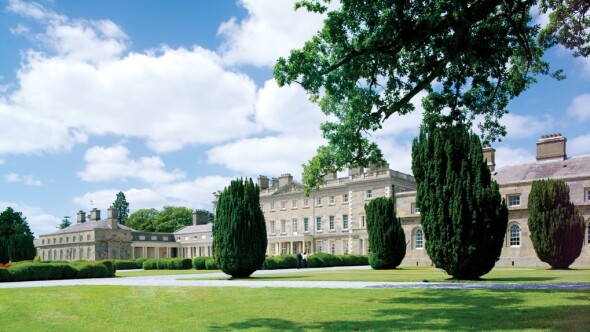 By Tim Gavrich
Read More
Load More
Popular
Locally-sourced sand is a Cool Golf Thing
World Top 100 golf destinations
Golf courses for beginners: How to book a tee time and pick the perfect place to play
Why the Walker Cup was the most compelling televised golf of 2021
Editorial Staff

Kira K. Dixon
Lifestyle Correspondent
Now Reading
You'll say 'amen' at Carton House Golf Club's O'Meara Course in County Kildare, Ireland
New Cookie Policy
WE AND OUR PARTNERS USE COOKIES ON THIS SITE TO IMPROVE OUR SERVICE, PERFORM ANALYTICS, PERSONALIZE ADVERTISING, MEASURE ADVERTISING PERFORMANCE, AND REMEMBER WEBSITE PREFERENCES. BY USING THE SITE, YOU CONSENT TO THESE COOKIES. FOR MORE INFORMATION ON COOKIES INCLUDING HOW TO MANAGE YOUR CONSENT VISIT OUR COOKIE POLICY.
CONTINUE
Search Near Me