Fun layout and was great for the others in my group that don’t play as often. Staff is excellent and course is always in great shape. Rather pricey for a round but is the only public 18 course on the island. Great course to play with kids or your family

The Breakers Resort in Palm Beach, Florida has a history that dates back to the late 1890s. As industry tycoons and wealthy socialites began flocking to the pristine shores of Palm Beach Henry M. Flagler, one of America’s great industrialists and founder of The Breakers saw the opportunity to purchase land and build grand estate hotels. He first built the.

It was our founder, who started the trend of grand, gorgeous properties on the island. His first was The Royal Poinciana, followed two years later by The Breakers. Twice the latter was destroyed by fire – in 1903 and 1925 – only to reemerge more luxurious each time.

The Breakers reopened in 1926 after the second fire and was modeled after the magnificent Villa Medici in Rome. Building it required that 74 artisans be brought in from Italy to complete the intricate paintings, detailed across the ceilings of the 200-foot-long main lobby and first-floor public rooms, both of which remain on display today.

Each successive year the resort’s reputation grew and word spread, ushering in aristocrats and glitterati to Palm Beach year-round. At any given time you could find the likes of the Rockefellers, Vanderbilts, Astors, Andrew Carnegie, and J.P. Morgan, not to mention US presidents and European nobility.

Much of the Breakers remains the same now as it was then, at least architecturally. You’ll still find unbridled luxury, the glamour, and aroma of the ocean out back and service that is second to none. In a world that is so interconnected, it’s nice to visit a hotel that lets you step back and takes care of your every want and desire. All with a price, of course.

As you enter the front door of the hotel after valeting your car, you’re quickly struck with the charm and opulence of the lobby. Look up at the ceilings as you tour the main floor and you can't help but be in awe of the paintings and adornments you see.

Check into your room and let the enchantment begin. The Breakers offers guest rooms and suites that are all well-appointed. We were treated to a Junior Suite with an Oceanfront view. In the room was a large king-size bed, a couch with coffee tables and two balconies overlooking the water. The rooms are tastefully decorated and leave you wanting for nothing; simply pick up the phone and dial “0” if you can think of something you need and don’t have.

Dining is a special event all its own. On the property, there are eight dining venues; nine if you count Flagler Steakhouse across the street in the golf clubhouse. For my money, it’s the best restaurant on the property. After ordering a round of cocktails, start your meal off with a Seafood Tower, a collection of shrimp, crab claws, oysters and crab legs. Then it’s on to the main course; you can’t go wrong with any of their signature steaks, including the Bone-in Filet Mignon. For accompaniments, try something different, like Gorgonzola Potato Tots or Caramelized Brussels Sprouts. Top it off with an after-dinner drink and a piece of their award-winning Key Lime Pie and you’ll think you’ve died and gone to heaven, albeit a few pounds heavier!

If seafood is more to your liking, you have to try the Seafood Bar. The bar itself is a giant aquarium, with the Atlantic Ocean serving as a backdrop. For drinks, they offer a wide variety of house-crafted beverages like a Pineapple-Infused Martini or a Flirtini. For appetizers you can’t beat their New England Clam Chowder or Blue Crab Nachos and the Broccoli and Kale Salad is outstanding. When it comes to the main course, Pecan Crusted Grouper is one of their specialties and the Blue Crab Fried Rice and Lobster Cole Slaw are truly delicious and unique. If you didn’t try the Key Lime Pie at Flagler’s you have a second chance at The Seafood Bar.

The Circle is a wonderful dining experience and home to what is probably the most extravagant breakfast buffet in the area. The room itself is quite impressive with soaring 30-foot frescoed ceilings and eight oval murals depicting Renaissance landscapes. As for breakfast, The Circle offers an artfully crafted buffet of hot and cold selections including fresh fruit and pastries to made-to-order crepes and omelets. If you’re not all that hungry, you can order off of their à la carte menu which features traditional favorites. I haven’t experienced it but I hear the Sunday Brunch is a culinary experience not to be missed.

There’s plenty to do at the Breakers once your food has settled. There are four pools and of course the beach, but there is also a world-class fitness center, spa, tennis, and shopping. Oh, and did I mention the two Rees Jones-designed golf courses: Breakers West, about 20 minutes to the property and the newly redesigned Ocean Course, right there at the hotel.

The Ocean Course at the Breakers as arguably the oldest golf course in Florida and was originally designed by Alexander Findlay in 1897. After closing for several months in 2018, the course reopened late in the year, fresh off a facelift from world-renowned architect Rees Jones. His makeover got its inspiration from The Breakers’ philosophy of balancing preservation and modernization. The renovation included a lot of reimaging and reshaping of fairways and greens the addition and maturation of several water hazards and the implementation of a new salt-tolerant grass, something that is sorely needed given the course’s proximity to saltwater. According to Jones, “Every hole has a different little twist and a different set of details.” At only 5,778 yards from the back tees and a course rating of 67.8 and a slope of 126, it’s certainly not going to overwhelm better golfers but as tight as it is, it’s certainly going to test your mettle. Four sets of tees produce yardages that anyone can handle.

Don't let the scorecard from the oldest course in Florida fool you. Being so close to the ocean, this fun, sporty little track will get you. If you polled golfers on the first tee what they expect to shoot after seeing the scorecard, I'm guessing their score, on average, would end up three strokes higher than anticipated. The pond water hazards are always lurking, and the fairways super narrow. Any stray driver could end up in the street or an adjacent fairway or behind a palm tree.
The best way to end the round is at the Flagler Steakhouse upstairs in the clubhouse. It is, without a doubt, one of the best clubhouse restaurants in golf.

So, I played the Ocean Course 5 times during a recent stay over Labor Day. Great deal as a resort guest only paying a cart fee. The service at this course is the same 5-star treatment you get throughout the Resort. Teeing off as a single first thing; playing 18 in 90-105 minutes then back to the hotel for the free breakfast (amazing) then back for another 18 and being at the beach before 2 is awesome and doesn’t get much better. Going back to the course, Surprisingly as a longer hitting player, this course plays much longer than the 6,200 yards due to being on the ocean at sea level, the salt filled ocean air, and the winds. The course conditions seem to be amazing. Even with aerated Greens they were fine and very putt-able. The bunkers weren’t too fluffy or lacking sand. They were well maintained. Fairways and tees well defined and cut. Cart parts need some maintenance from the roots pushing them upwards; but are otherwise excellent.

My only complaints were that hole 6 is not 430 yards, itplays about 370-380; hole 13 is very dangerous from the back tee given how close the green is to the road when hitting from 215 yards; hole 16 is the hardest hole by far on the course, next time I’m laying up and chipping; and 18 tee shot is not well designed with the range and clubhouse area in play too much.

A step back in time

This is the oldest 18-hole golf course in florida but it
was beautifully redesigned in 2000. Relatively, short course but its several dogleg holes makes it interesting. Superb condition with stunning landscaping. Expensive to play but with a nice touch of class and a feeling of old Florida. 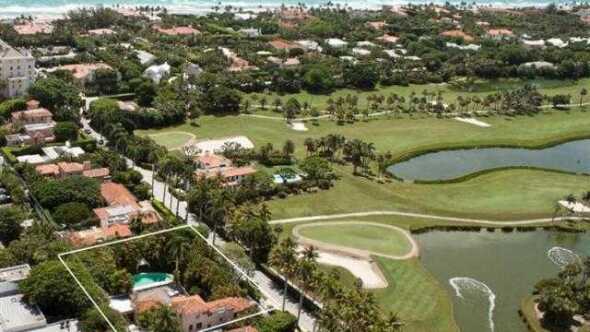 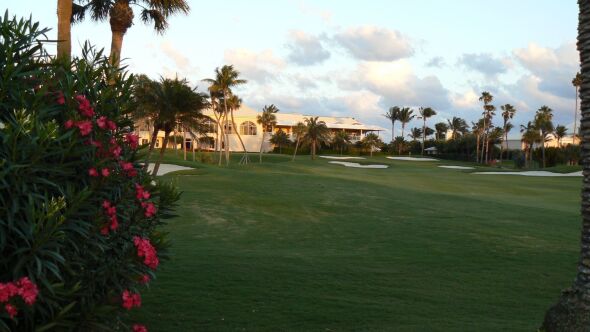 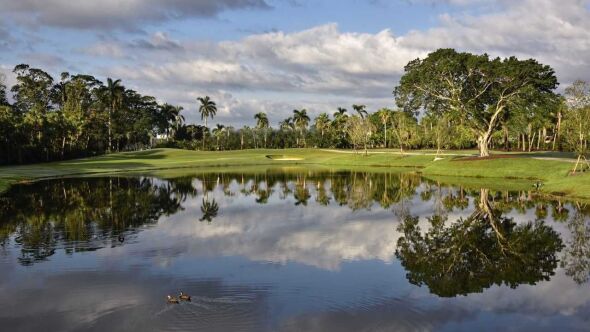 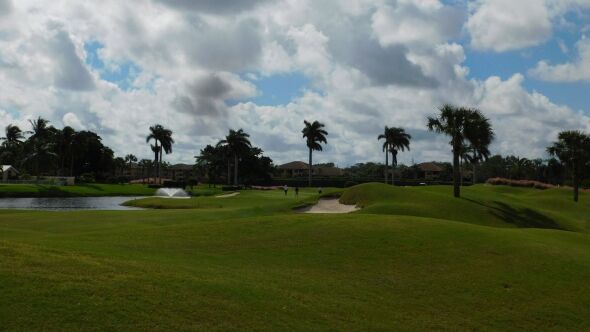 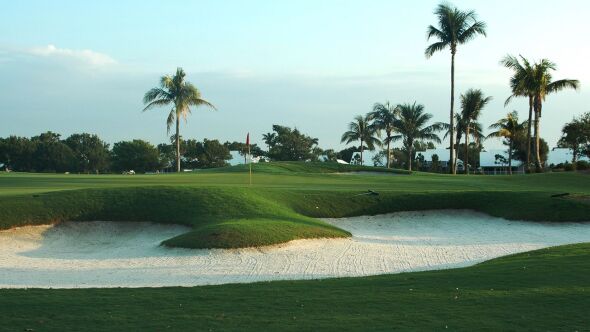 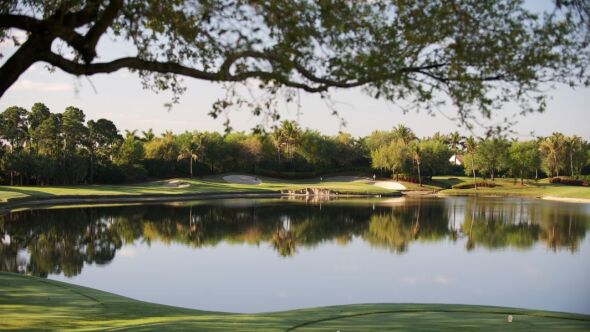 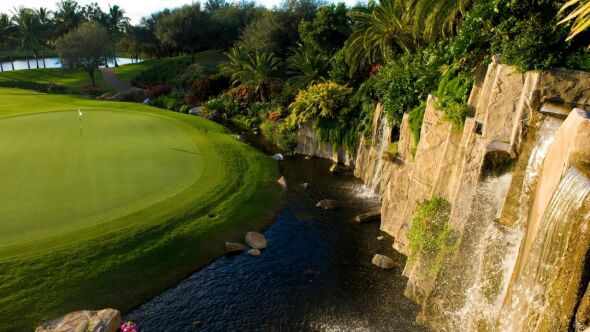 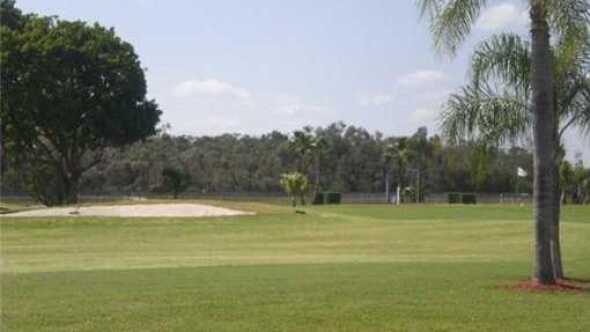 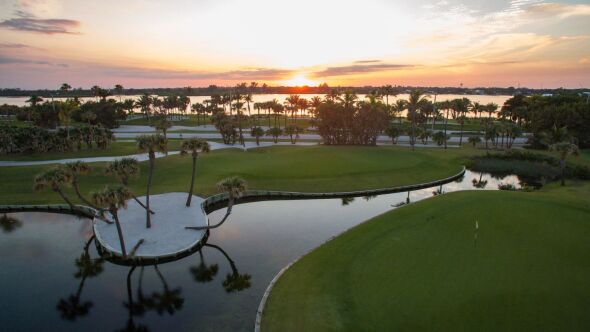 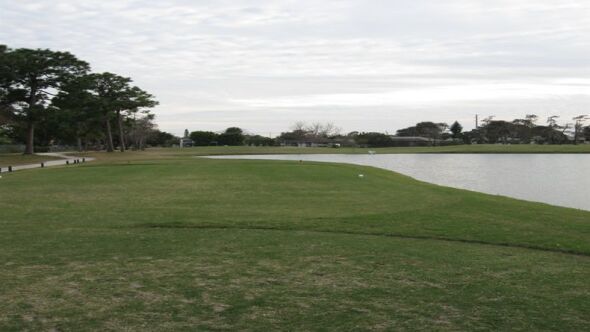 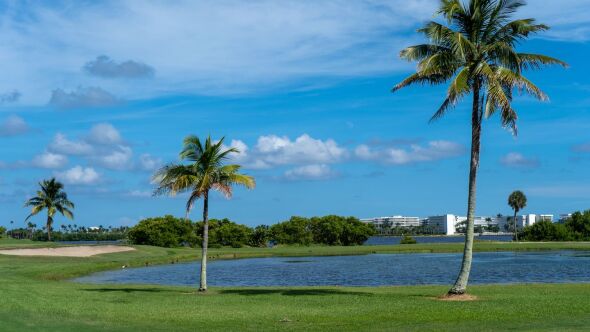 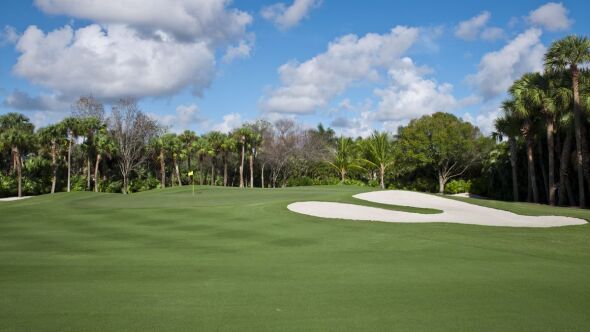 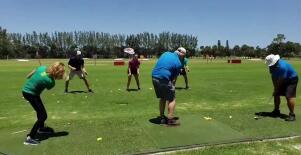 Video
How Palm Beach National keeps the vibe during COVID-19 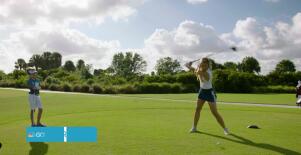 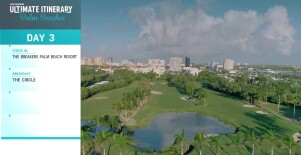 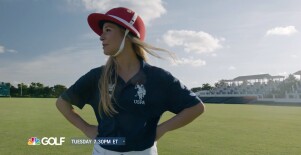 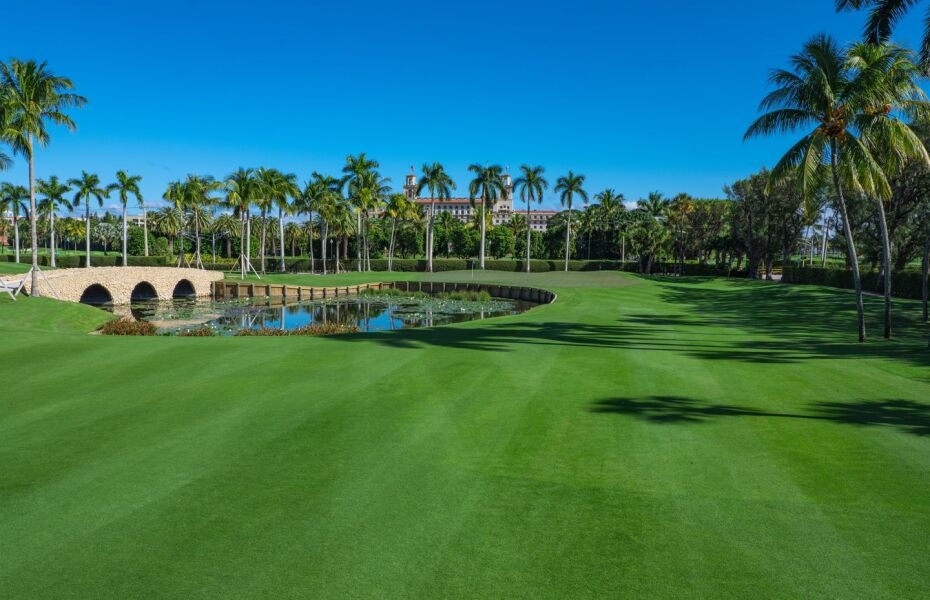 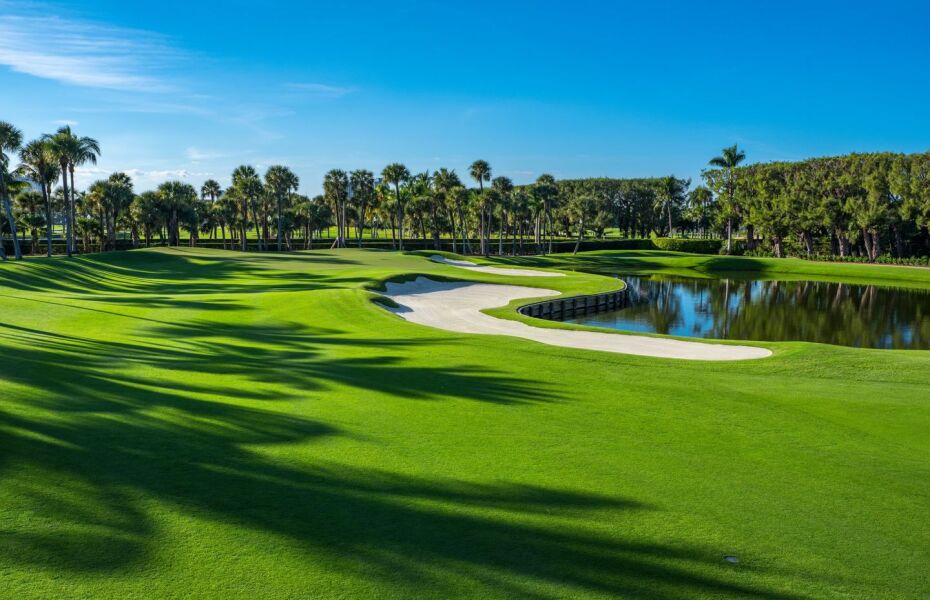 A view of a hole with water and bunkers coming into play at Ocean Course from The Breakers. The Breakers 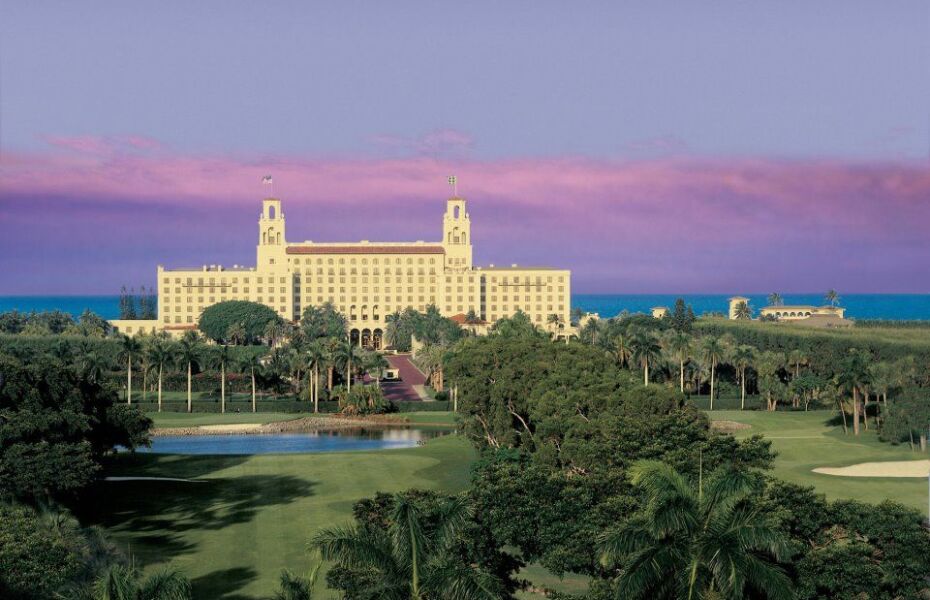 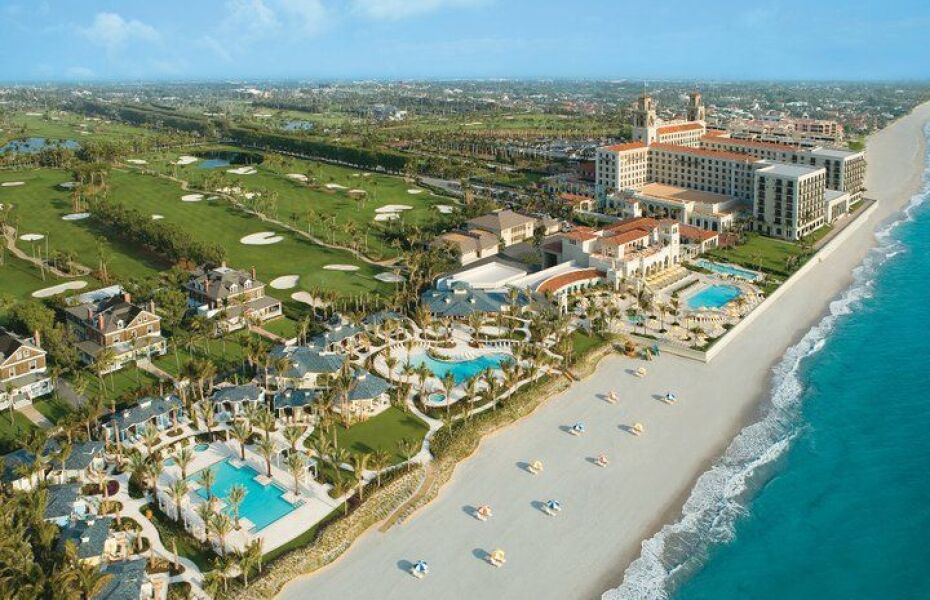