This course layout has changed since we last played it and to be honest we preferred the old layout.
Greens and bunkers were in decent condition however some of the fairways and tee boxes were already looking a bit worse for wear this early in the golf season.
We were playing behind a four ball who were terribly slow and despite being several holes behind the group in front refused to let us play through and indeed were holding up the whole course and maybe if a course marshal was present could have resolved the matter, said felllows were parked in members area
Bad Etiquette

Played a 2 ball, unfortunately we had been booked in with another 2 which was annoying, but we couldn’t find them so had to play as a 2 in the end. We were held up a lot by 2 rather rude members who wouldn’t let us through, even though we had a buggy. Despite this, the course was lovely, only 1 par 5’s if you play off the yellows or whites which is a bit annoying but there was some very difficult par 4s and 3s to make up for it. Greens were in good conditions and the same goes for the fairways. Course was really enjoyable, definitely recommend if you can get it for a good price!

We drove over an hour to play here. It wasn't a good experience or one that we will be repeating.
Terrible signage. For example, we inadvertently played the 11th instead of the 9th as there was a seemingly obvious route off the 8th green to a tee box that was poorly marked that turned out to be the 11th. Tee boxes appear only to be marked at the whites (which presumably only the members play and therefore are familiar with the layout). OK, we were possibly errant in our checking but for guests, am pretty sure that they would much prefer clear direction signs.
Vitriol received from other groups (members?) who seemed to be oblivious to our explanations and were angry that we delayed them (as we corrected ourselves) for at least one minute. We are not slow golfers and are keen adherents to the 'ready golf' philosophy but we had what were (we assume) members playing right up behind us such that they were rolling tee shots past us as we were lining up our second.

Greens were terrible. Appreciate that it has been very wet recently and mowing may have been difficult but pretty much all our putts were guesswork and some were hopping an inch off the ground and deviating randomly. We were not advised of this when we booked.
This was part of a deal advertised (with a corporate view) that we would play again, join or recommend. I would suggest that on the evidence of today we will not be playing again, we will not be joining and we will not be recommending.

craigrobinson1
Played On 12/21/2019
Reviews 5
Skill Intermediate
Plays Once a week
I Recommend This Course
5.0
Previously Played

Very nice challenging course with a variety of holes. Playing 18 is spectacular and the drive over the lake is one of the hardest ends to a round that I have had to play. Would return

Great golf course and the course marshal was very good. Often driving up to see how we were and to explain the course.

Only downside i would say is directions to the tee boxes and no maps on display but the course itself is very well maintained and greens were impeccable.

Nice surroundings, but the layout is very confusing - 3 separate areas spanning a road and railway. There are also numerous other greens & tees under construction which adds to the unfinished feeling. Some greens were heavily sanded & hollow tyned & therefore very slow.
Lots of slow groups, most who were kind enough to allow me through as a single player, but a couple steadfastly refused to acknowledge my presence meaning I had to walk through and miss a couple of holes.
I personally wouldn’t go back as it is disjointed and very short for a lower handicap golfer, even off white tees and likelihood is you will be looking at a 4 hour round absolute minimum.

New course upgrades coming along nicely but a shame to lose the tricking par 3 17th while they do so . But greens have sand and spiked holes . But still are ok
Thank you will be back soon

Course in poor condition. Greens good. No sand but grass in bunkers.

Booked through tee off times for £14 each, course is currently in the process of expanding but did not impact at all on our round and looking at the plans it will be a premier course in this area, members were friendly as were bar staff and pro shop will be looking forward to playing the new course next year

A great price for a great course

With the recent hot and dry weather, there were still a few bare patches on the fairway which was to be expected, but overall the course is in a very good condition. Staff in the bar are very polite and helpful and at only £13.50 a round, it was a great afternoon's golf.

We had a lovely day at Milford. The course was challenging but enjoyable. Greens were great and course was well maintained especially in such extremely dry conditions. Staff were very friendly and helpful. Would definitely recommend an we will be back/

We played Milford on an extremely hot and busy day.The course was in very good condition but the pace of play was very slow due to the number of people playing.It was also difficult to park but the staff were very helpful in trying to assist with this problem.Greens were excellent but you had to be straight on the fairways as the rough was pretty unforgiving.We would definetly play the course again but possibly at a quiter time.

as soon as we arrived a member warned us it was the day of their championship and the greens had been ironed and the rough was extremely punishing1 he was correct about both although quick greens are a treat to play on, long rough isn't !
Nice layout with a few holes played over water, great pace of play and will be returning soon.

Decent layout with enough challenges, finishes with some great feature holes. Greens were immaculate but the fairways in a few places were a bit rough. Good course all in all

Do not be fooled by the relatively short length of the course, the opening hole appears to be 330 yards off the visitors tees but the dogleg is a right angle and with trees en route you need a good 220/230 to be able to see the green for your approach. water comes into play on around 5 holes and the 17th is very picturesque, only 100 yards but over a lake and with a stream at the rear you have to get club selection correct. Great value in the afternoon at £20 per head, well worth a visit

An enjoyable round of golf, albeit slow..
Would be a good idea to check tee times and if there are any comps/society matches booked before you book. On our day of playing there was a society of 25 players that teed off 1 hour prior to us going out. By the time we reached the 3rd hole we were waiting for the players ahead to move out of range before teeing off. This continued for the rest of the round. Also there was some confusion with tee times, when we arrived at the 1st tee another two ball arrived behind us with the same tee time. We were not informed by the Pro shop that they had teamed us up with another two ball. The course was not that busy after our tee time of 13.00 so we continued on as a two ball as booked, but a lesson learned to check before hand.. 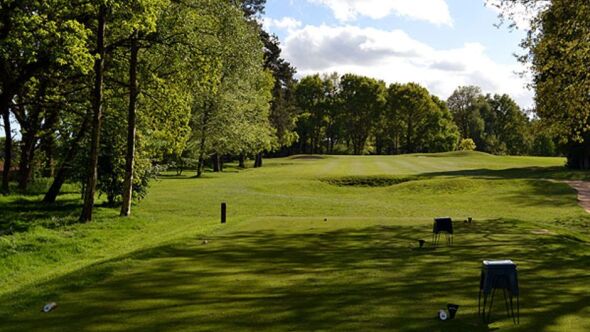 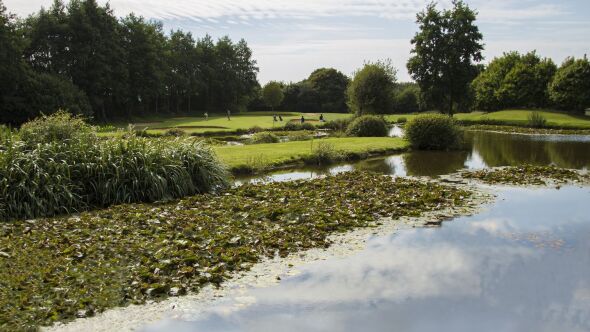 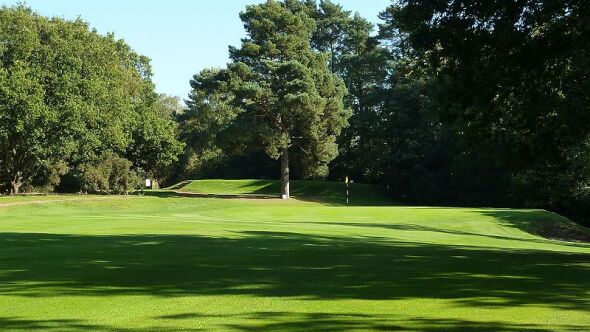 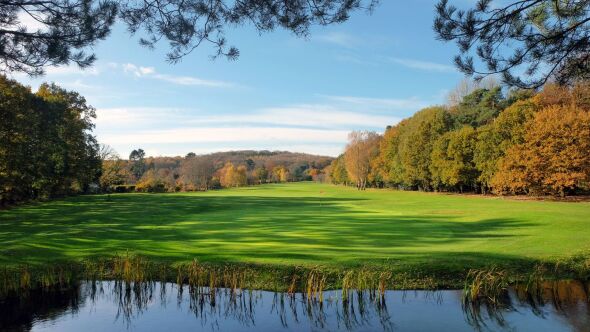 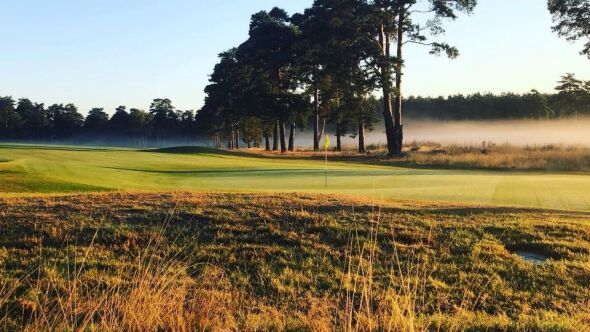 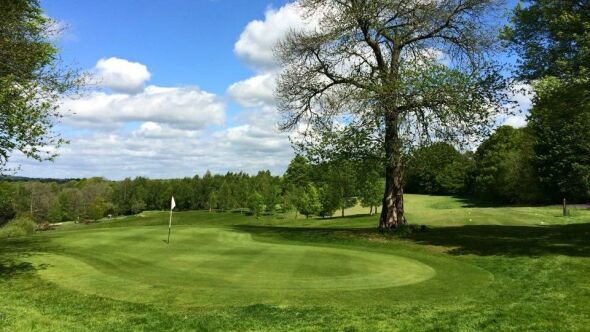 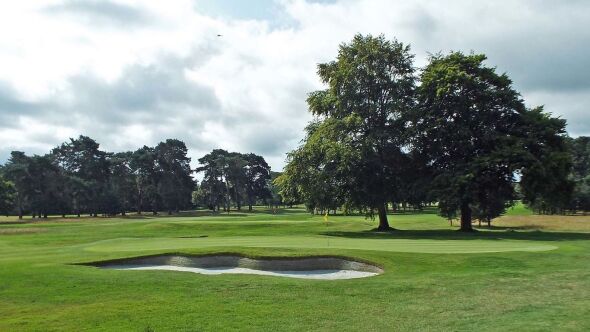 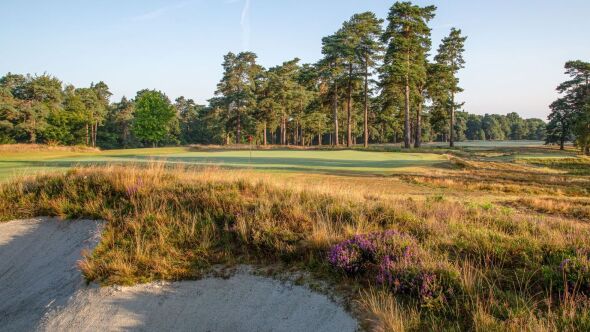 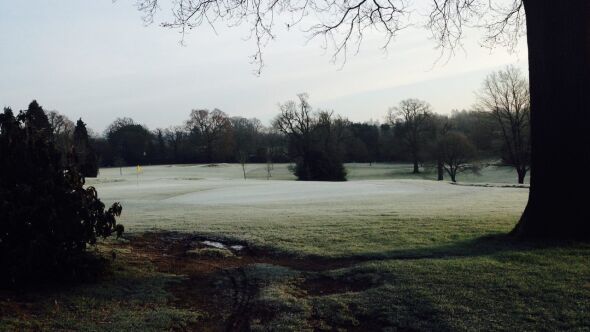 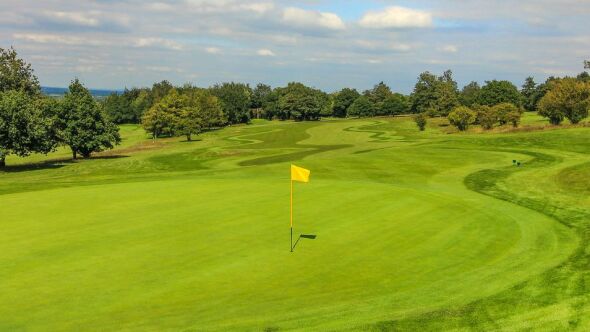 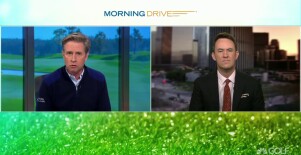 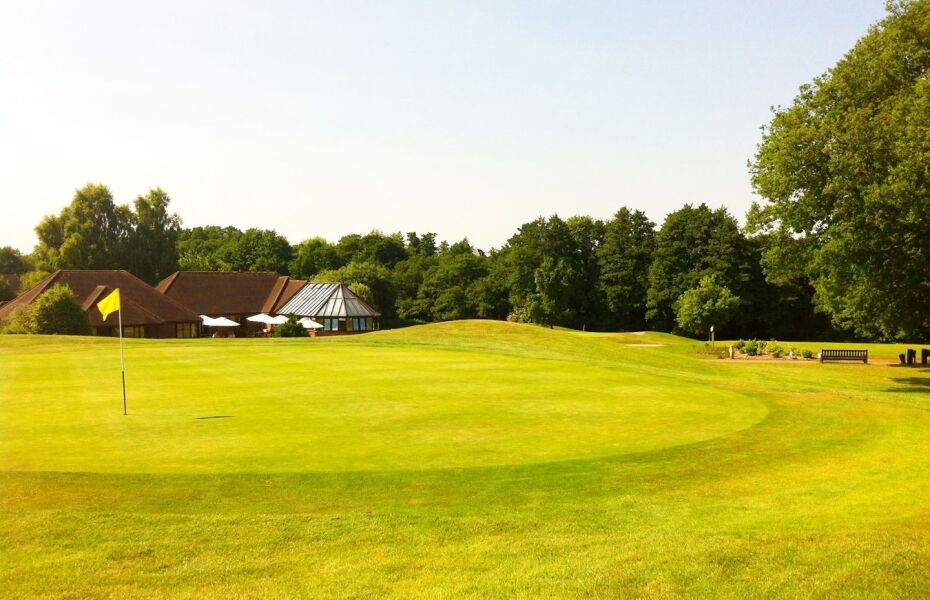 A view of a hole at Milford Golf Club 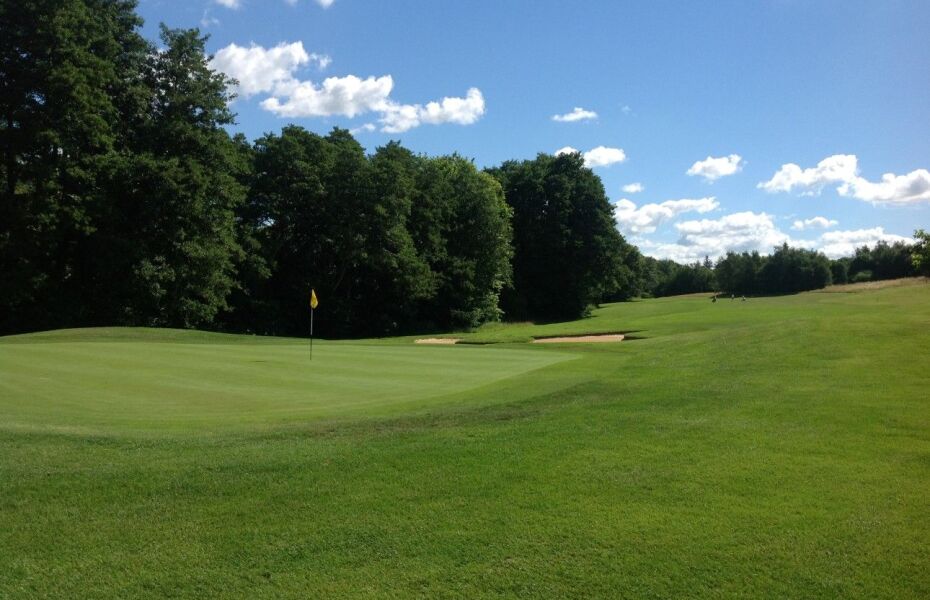 A stunning view back down the 18th at Milford Golf Club 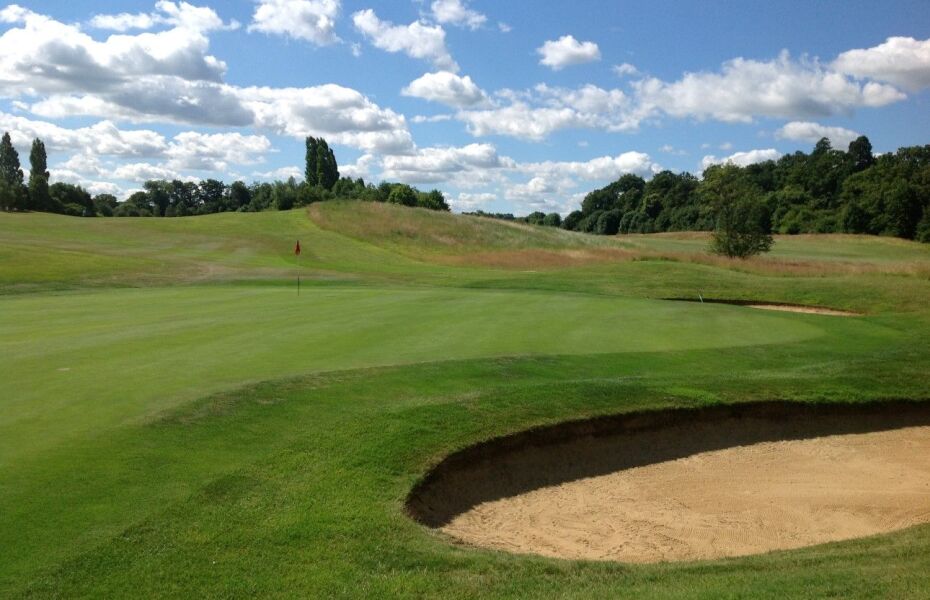 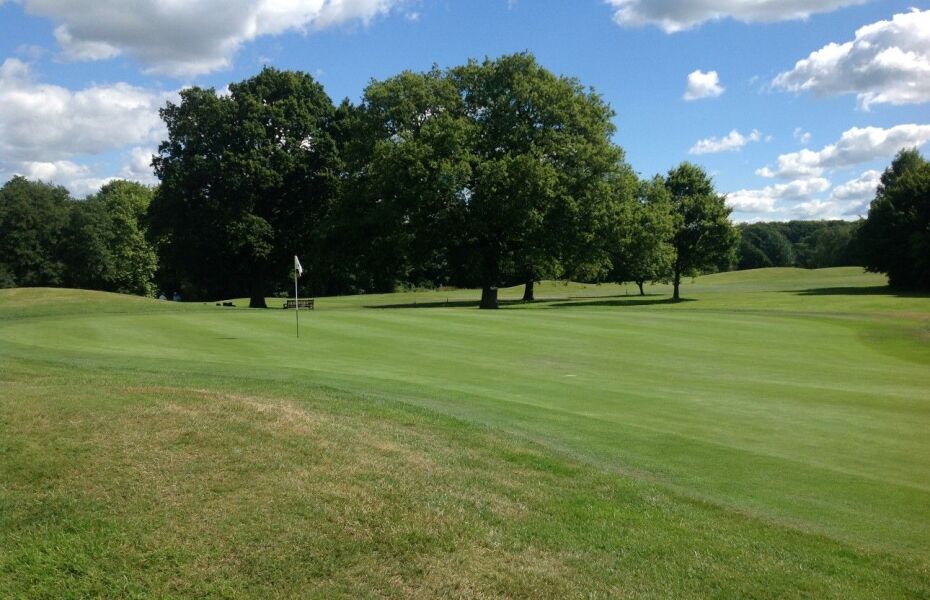 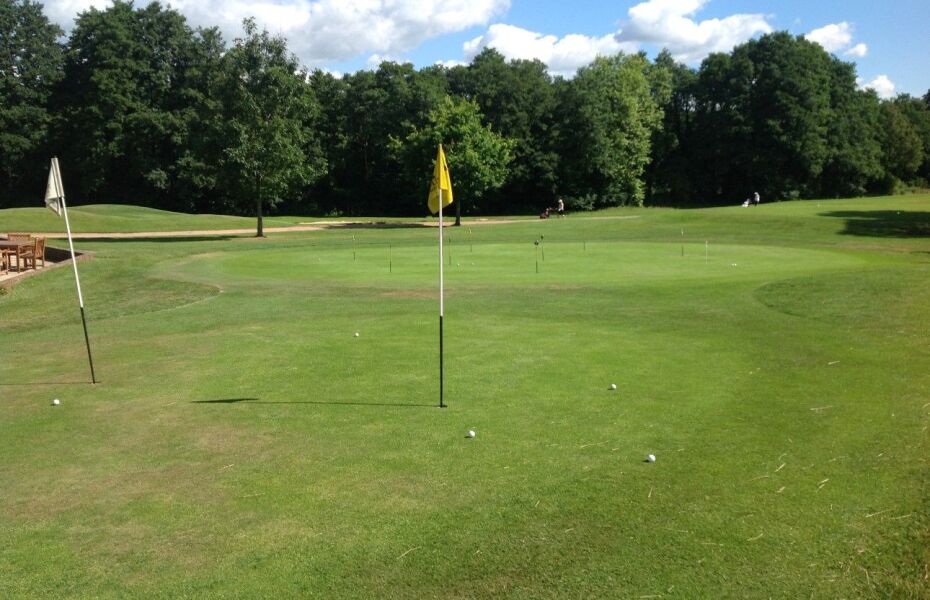 The practice green at Milford 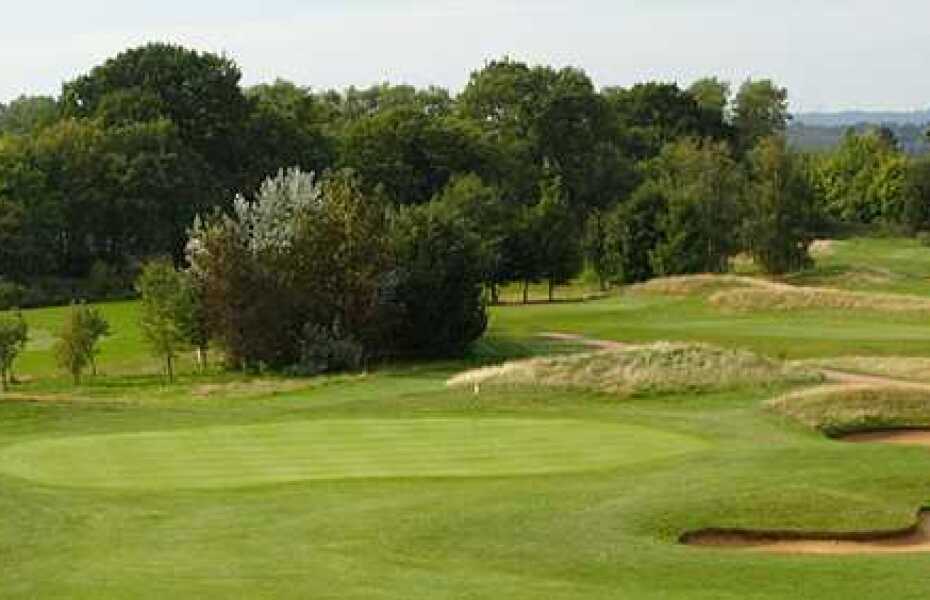