Just As I Remember

I use to live about a 2 minute walk from this course. And everything was just as I remember on my return. Narrow, unforgiving and forces you in to creative shots. I think this is why it’s taken a bit of a hammering with reviews, you get punished for poor shots, but rewarded for thinking your way through and avoiding the big miss where possible. The club house is fantastic and the driving range is second to none. Will be coming back

The course was in a awful condition.
You couldn't differentiate from where the fairway finished & the green started.
Just awful condition.
The greens hadn't been cut in weeks, they were at least an inch long.
It's a country park with some kind of golf course in it. Stay away its rubbish.

Not a winter course

Temp greens in the middle of summer?

Fantastic. Harder than I remember. Apart from the rain, it was temporary greens that let it down. I don't think I have ever played here without at least one temporary green.

Challenging in more ways than one

A deluge of rain in the morning made for some interesting greens around tilgusta. Balls plugging to inches deep, my driver being used on the greens for 6 foot putts and some seriously questionable bobbles.

That being said the 9th and 18th greens were kept really well, those in front of the clubhouse.

Greens were actually a marked improvement on my initial round in the summer of 2020. Last time they didn't have grass on. I gave them a second chance, but instantly regretted the decision once it was noticed that the fairways resembled that of someone who have left a charcoal bonfire going on the fairway. This was a common occurrence throughout.

Looking for the next tee block was like something out of the crystal maze but eventually we set ourselves free and made it to the car park for a swift exit after numerous 3 putts. Fortunately my drive home didn't involve as many 90 degree right turns as the course has.

Really nice course which will be better once 3 temporary greens are back in play. The rest of the greens were immaculate. The fairways on some holes were poor and require attention but overall was really impressed.

We have played Tilgate twice now, as we gave it a second go after giving it the benefit of the doubt the first time round, a massive regret. £18 for this 18 hole course is a robbery! You get mislead by the first 3 holes, thinking it might be a nice course, but after the 3rd it’s just one big slope into getting annoyed and realising you have been royally mugged off for your money. The greens are shocking, and they have 3 temporary greens on the course, which we couldn’t see on the website and all there is to indicate this is a small a4 piece of paper on the tee box of the first tee. Every single hole is a dog leg, except for the par 3s, it’s almost as if they thought ‘hey! We know how to make this challenging! Let’s have every hole at a 90 degree left or right angle!’ They have a massive issue with public walkers across the course, even though there are dedicated paths for walkers, they seem to trample across every hole, even ones that don’t seem to go anywhere walkable! The temporary greens were a joke, they weren’t marked out on the floor and made decent length par 4s into a shambles! The fairways looked like a building site, the ground was churned up and the fairways became just piles of mud hills. Please for your own sake stay away from this course it is not worth £18, I don’t think you could pay us to play it again. It’s a real shame because the staff are nice and helpful and where it’s located the course has so much potential but it has been executed so so poorly.

Total course was in a very poor condition. From the fairway to the greens. Some were under construction, but even proper so called greens were as bumpy as anything. Never played on such a poorly kept course and we've only just come back. Seems they have put all their attention into the driving range and completely forgotten the course. Will not be going back there until I hear MASSIVE improvements have been made?

Too many very poor temporary greens

We read a September review saying that there were only a few temporary greens but unfortunately this wasn’t the case. The temporary greens were extremely poor and combined with the foreshortened holes spoiled far too many holes. Disappointing as the course in general is nice and the staff friendly.

Played the course numerous times over the years, but it has clearly seen major neglect recently.
Dry as a bone, 18 temporary greens - if you can even call them that, literally no point in even attempting to putt. Absolutely abysmal condition currently.

Having booked through golf now we paid the full geen fees. When we arrived at the course the pro advised us that all of the greens are dead!

The pro advised that had we booked on the course web site we Would have paid 50% less on the green fees due to the state of the course.

Obviously Golf Now are not aware of the current problems on the course.

The pro couldn’t offer us a refund because we paid through Golf Now.

Without the problem it would be a hood golf course apart from the dog walkers an cyclists that regularly appears cutting across the fairways.

Bit of a swizz!

I'm not normally a complainer. I really like this course and have played it many times. the Golf Now app took my money and I turned up for my round after driving for 75 minutes. the pro sjop chap said that we'd have to play the 1st 9 twice as the greens were under repair on the back nine. OK fair enough. but it turned out that ALL the greens were being repaired - not even temporary greens - just a hole somewhere in the fairway. we played anyway but felt that taking the full price for the greenfee was a bit rich as the course was not in any sort of playable condition. Really good course but I felt cheated on this occasion.

slightly hilly, yardtage approx under 6000yds with some tricky holes

course layout is tidy and reasonably maintained. It is an ideal course to play especially in winter time. 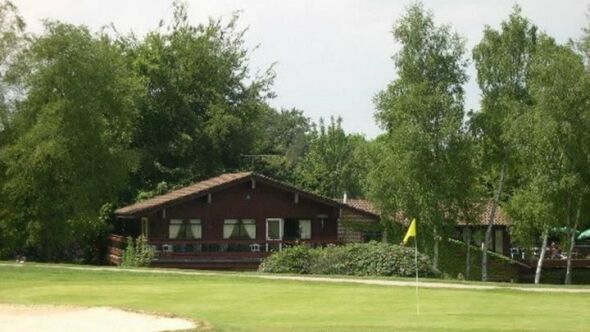 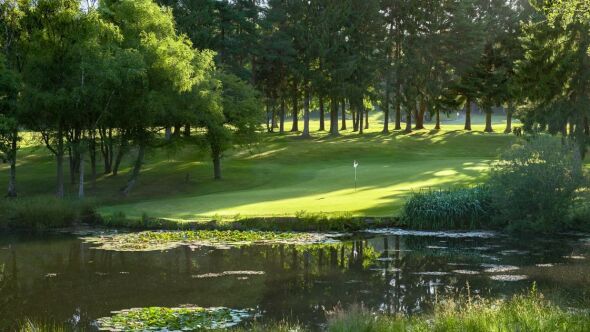 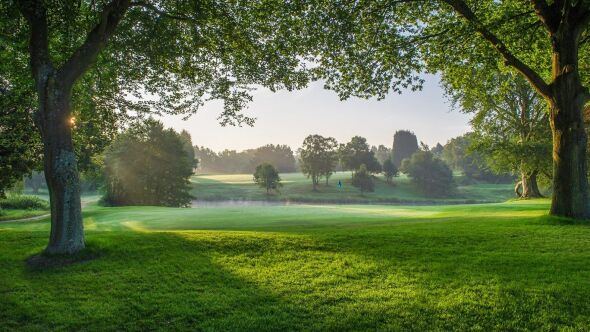 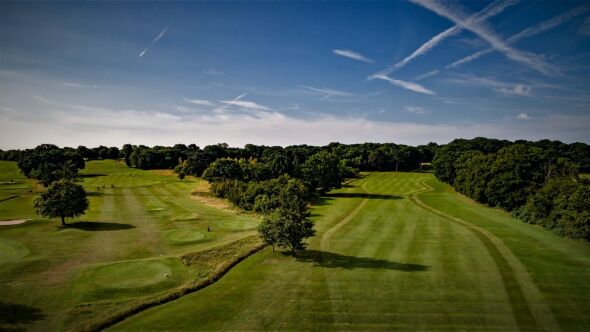 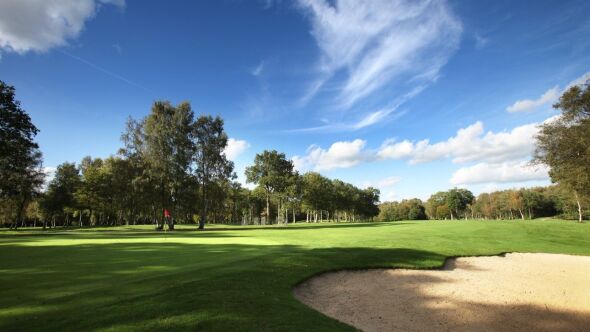 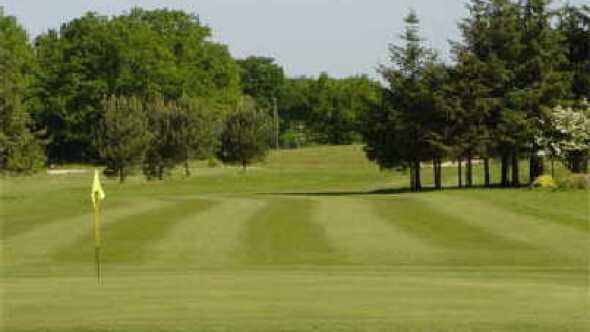 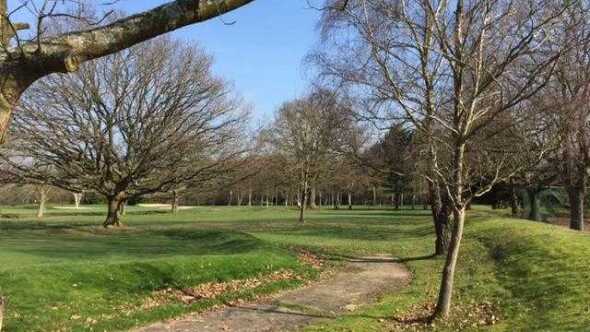 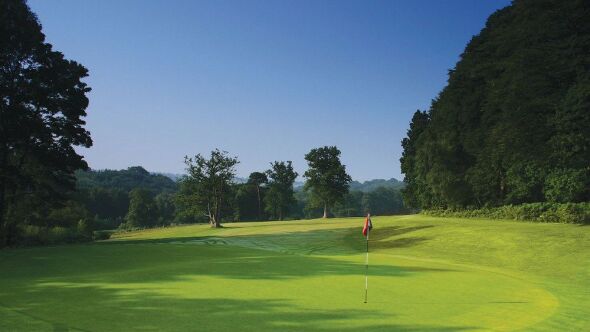 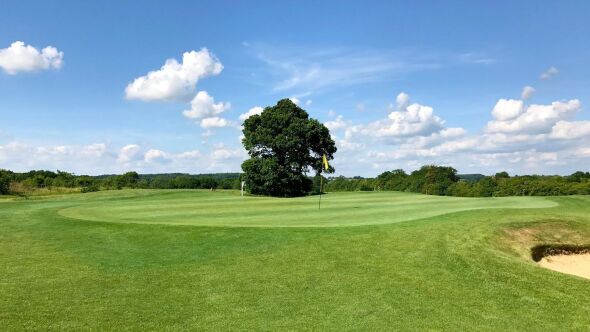 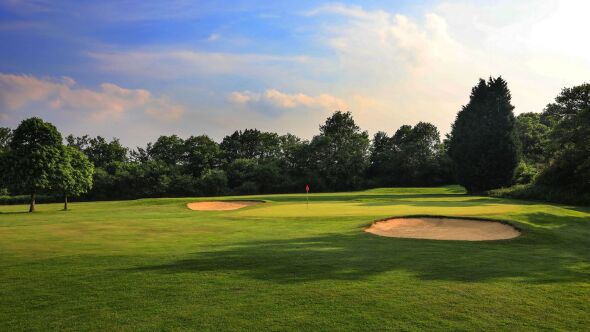 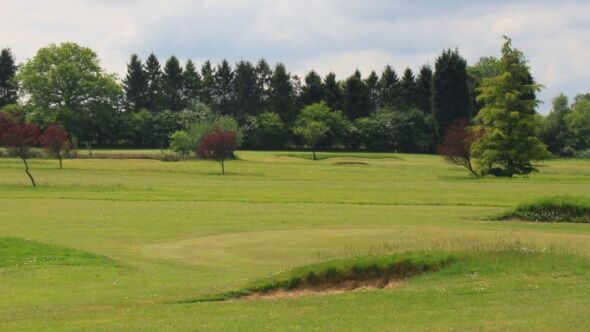 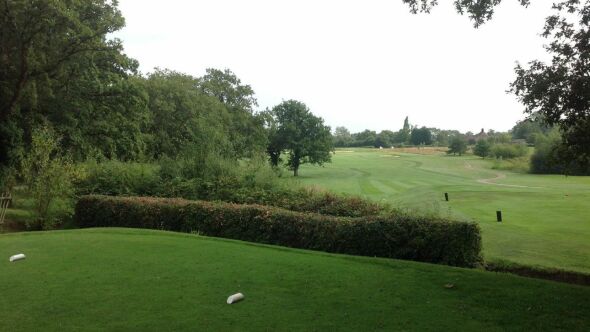 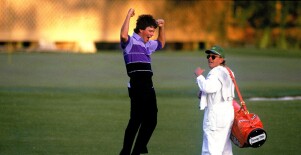 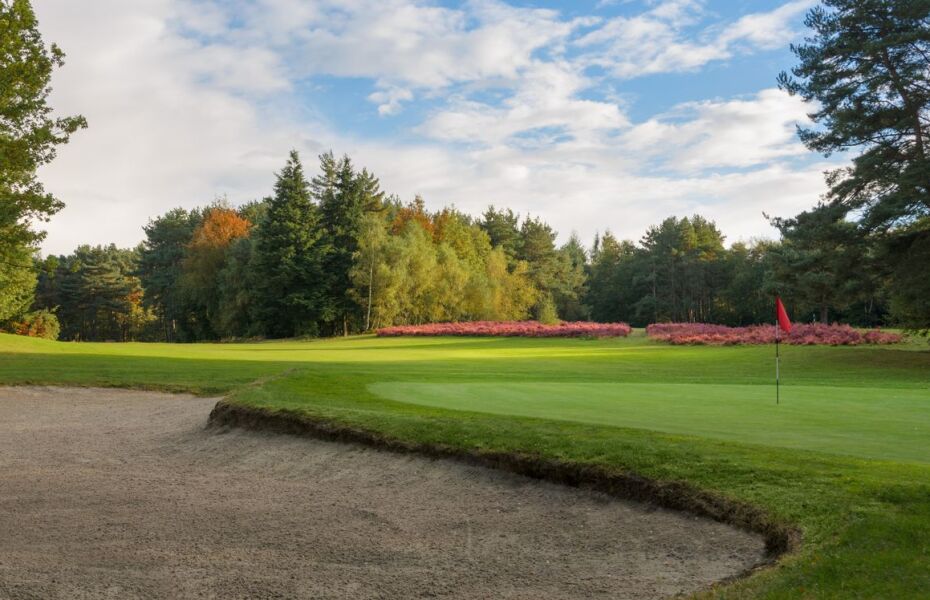 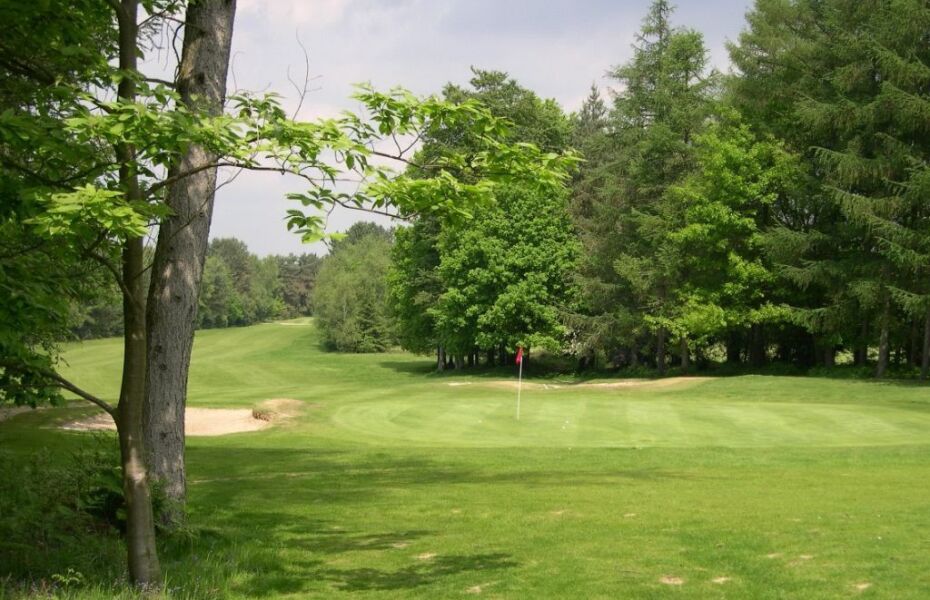 A view of the 16th at Tilgate 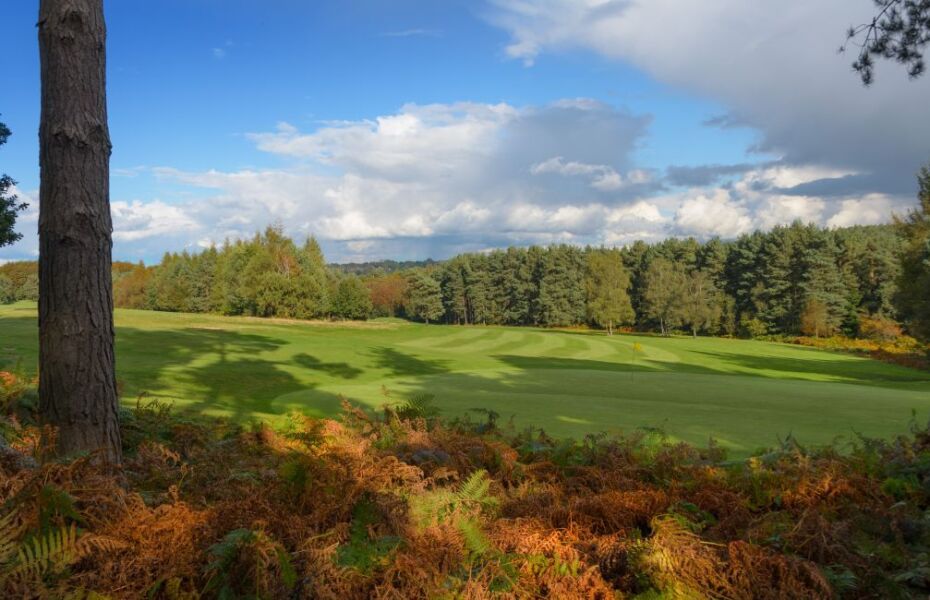 A look over the 16th green at Tilgate Forest Golf Centre. 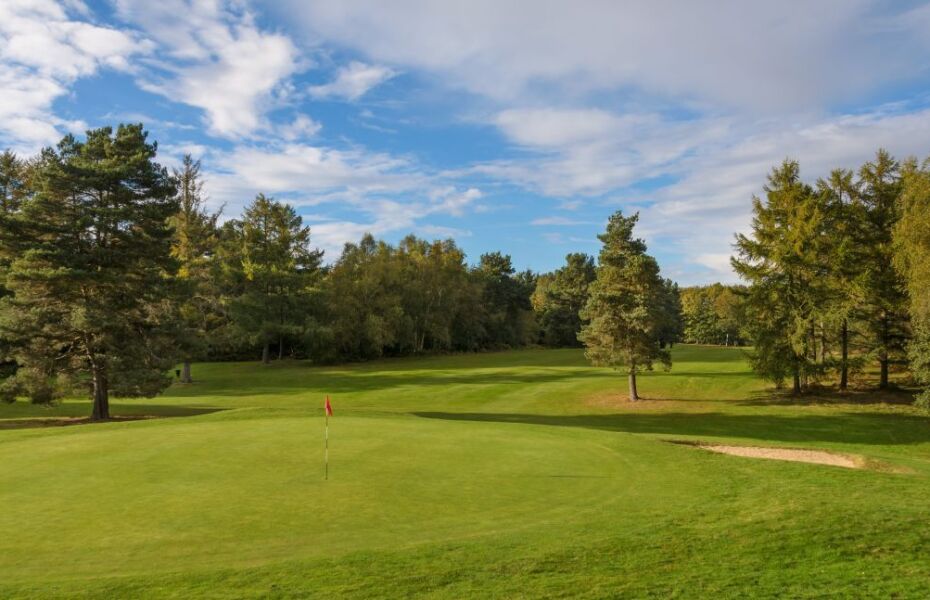 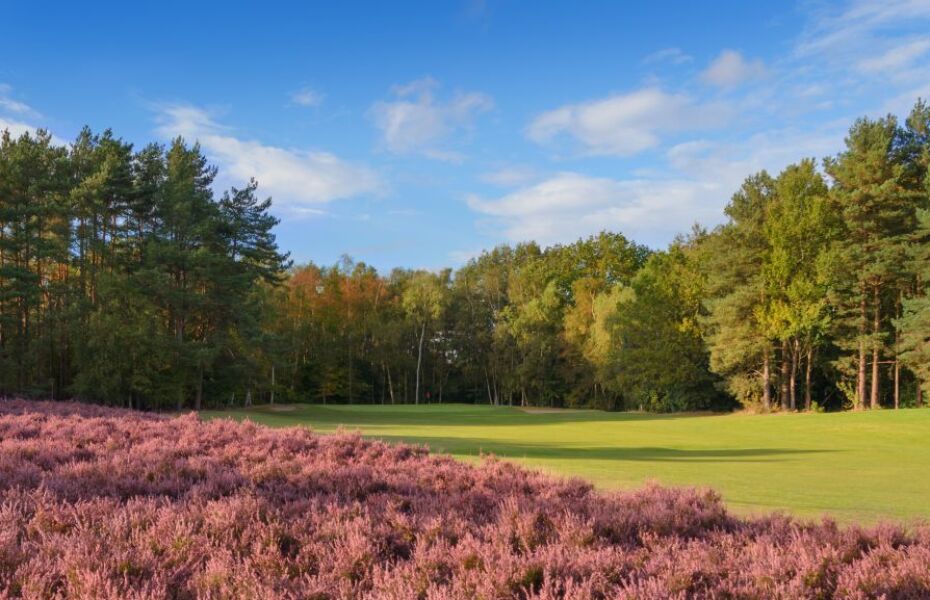