The 19th Hole is Great For:
Drinks 12
Patio Dining 9
Dinner 8
Course Challenges Include:
Undulating Greens 20
Elevation Changes 17
Bunkers 16
This course/club is great for:
Advanced Golfers 14
Wildlife/ Scenic Views 13
Locals 10
This Course's Location is:
Worth the Drive 16

This course is in very good shape, a couple of the greens are a bit thin and need some attention. We played a fast 9 and then it slowed down, a lot. It is a great place for fall golf, good views and fun to play.

Always worth the ride

It takes me over an hour to get there, but to play a course of this caliber for the money I paid makes it more than worth it. The more you play the course the more you learn like how hard the green on #2 slopes from right to left and the 2 tier green on number 6. It is a great course and I could not recommend it enough

I really like the course however the pace of play was ridiculously slow. The greens were very beat up because it seems like nobody fixes there ball marks. Is it worth the money, I’d have to say no due to what I experienced.

course in pretty good shape, some wet spots here and there but not bad. greens rolled good and a fun layout. pace of play was bad though. never saw a ranger and had two groups holding up the entire course. still a good time though and would go back again.

Course is great condition. My only suggestion would be to either have monuments at the tee boxes to depict hole layout, or have course layout on the scorecard.

No golf course architect has designed better upscale tracks in Connecticut, including re-designs, than Mark Mungeam. Clearly evident to me, after playing Connecticut National today, was how this course rivals Mungeam’s Oxford Greens, the best modern course I had previously played in the state.

Quietly methodical and detailed in his approach to hole design, Mungeam doesn’t try to wow you with pointless flash: water hazards are not scattered about to make the course appear impressive but instead are used sparingly; bunkers, though used frequently, always seem to be placed for strategic purposes only. (By the way, isn’t this what great links courses do?) Still, Connecticut National manages to look like a terrific golf course, as its fairways roll smoothly up and down over an ideal, countryside landscape for golf. It could pass, virtually, for a PGA tour venue, although it’s not conditioned quite so fanatically. Play it from the back tees and it will measure up, likely, to TPC-Hartford in difficulty (or you can compare, simply, the slope and stroke ratings).

Fully applying his own style, Mungeam borrows from his mentor and former design partner, the late Geoffrey Cornish, who believed in applying typical Scottish landforms in course design by taking advantage of the most important feature of construction: smart use of the given topography. The constant ground movement in the fairways exemplifies this philosophy. But Mr. Mungeam also likes to up the adrenalin level, here and there, in the manner of Robert Trent Jones, Sr., by providing some genuine risk-reward action. At three, for example, a par-4 Cape hole, you may risk a tee shot that takes a longer route over some dangerous and recessed bunkers, in hopes of leaving yourself a shorter approach to the hole--and with a much better angle that opens up the green. Then there’s the amazing eighth, a short but potentially deadly par-4 playing steeply downhill off the tee. And the tee shot just happens to be blind, so you’re forced to flirt with a greenside pond if you want to make it a one-shotter. Deep perils, high risks; strong emphasis on strategy.

Every hole is a good one here, so here are three representative ones for those who’ve yet to play the course:

Par-3 fourth, 223: Playing downhill to a green set at an oblique angle to the tee, the hole favors a fade. Hit it too straight and you may end up in the left-side bunker or gnarly, sloping rough. Short right: another bunker. The green is pitched back to front, making distance control tougher. A hole that cuts you little slack.

Par-5 eighteenth, 588: The home hole may be the best five-par, featuring a gently curving dogleg-right that begs for a power fade off the tee. From there, you’ll have to deal with the Spectacle-like bunkers (somewhat reminiscent of the pair at Carnoustie’s 14th, if smaller) on your second shot. The entire conclusion to this hole, in fact, feels like an homage to Carnoustie’s 14th. The bottom line is that additional fairway and greenside bunkers mean you’ll have to make more decisions about how to avoid them.

Par-4 fourteenth, 447: The left-side water hazard may come into play if you’re playing the correct tee, though from the tips it’s over 280 yards out. 14 plays slightly uphill and will challenge you to hit a precise approach into the skull-shaped green with bunkers short-right and left.

A few other qualities that make the course outstanding:
A) Mungeam’s balancing act: Short and long par-3’s, 4’s and 5’s encouraged me to use, today, every one of my irons and hybrids, driver and three-wood, and all three wedges. I chipped and pitched, as well, with a variety of clubs (there are level and slightly sloped areas around the greens, and dropoffs, too).
B) The green complexes: The greens here may sometimes punish weak putting. Just as at Oxford greens, Mungeam sculpts putting surfaces with slopes that may move in different directions on a given green, varying degrees of slope, and different features and contours over each surface’s areas for pin placement. Bounces into these greens may be predicted with good reliability, and all of them have an entrance by which to run the ball on. No two greens are alike, and each has its own set of problems or hazards nearby.
C) Enough fairway width, on many holes, to allow some freedom to use the driver without great fear. And proportionately narrower widths on some of the 330-380 yard four-pars. Moreover, every par-4 and 5 profits from at least one fairway bunker.
D) Creative, unusual, odd, and varied bunker placement (along with varied configurations in a few places) to keep you on your toes.

Playing Conditions: There is little to criticize here because conditioning, as well, was excellent overall. Well-groomed fairways, tees, roughs and green surrounds; and the greens themselves were true. I’m not partial, however, to the speed these greens played--quite fast--combined with some of the bold slopes on four or five of their surfaces. Our foursome clearly was slowed through the eighteen because three and four-putting was sometimes a distinct possibility, and not because anyone was a bad putter. On the third hole, a short, straight uphill putt rolled straight back down the slope a few feet from the direction it came up, just after it had stopped a foot short of the hole. In truth, I haven’t seen that anywhere in a few years.

Some conclusions: Connecticut National presents fair challenges on every hole: a varied, tough, strategic, engaging test that’s about smart golf and that rewards careful shotmaking along with a solid short game. Sometimes demanding on certain shots, always featuring balance and variety, and, despite some ultra-speedy slopes around the greens, among the very top public courses in Connecticut.

Like Mungeam’s equally stunning Oxford Greens, it’s at the top of the heap among anything designed here within the last fifty years. And while playing this track is hardly a day at the beach, I’m already looking forward to my next visit.

Rough around the edges.

Beautiful layout. Great value. But… TERRIBLE (almost non-existent) course markings. No 150 and 100 markers. Holes are often unmarked. Scorecard has low or no information about the holes. Basic investments seem to not be in place; odd choice for a great course.

Course was very wet (cart path only) this led to a much longer round. Some holes fairways were just running water. Overall the course looks great, all the rain has it pretty lush with green, unfortunately playing does suffer a little. A couple of days to dry out, it should be perfect.

Greens are in great shape and turn everything on fun. They're doing some much needed improvements 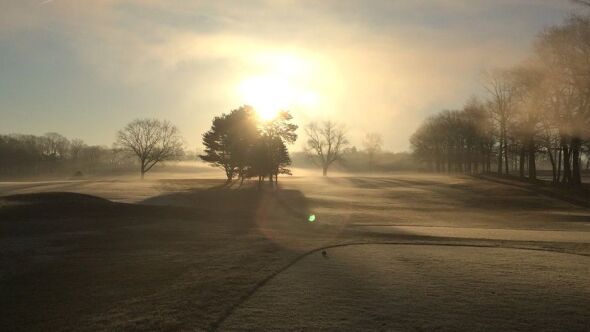 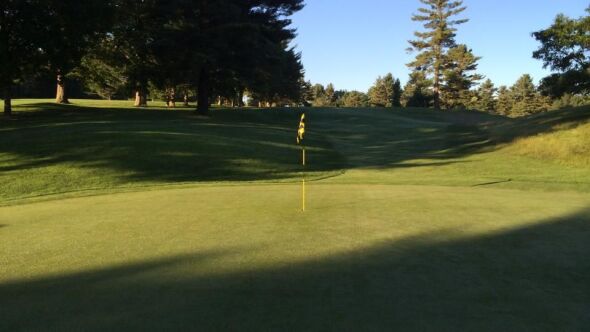 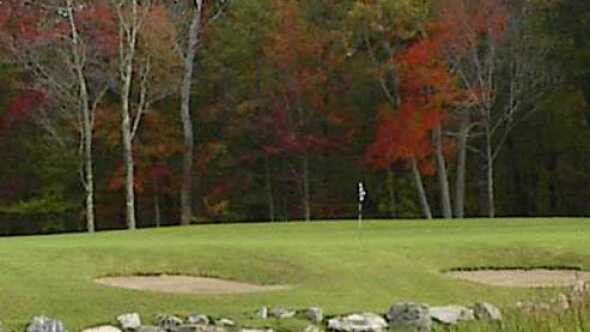 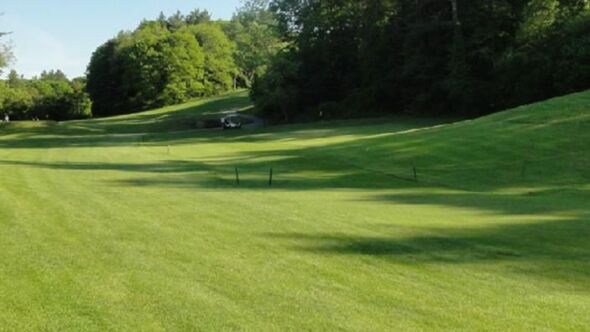 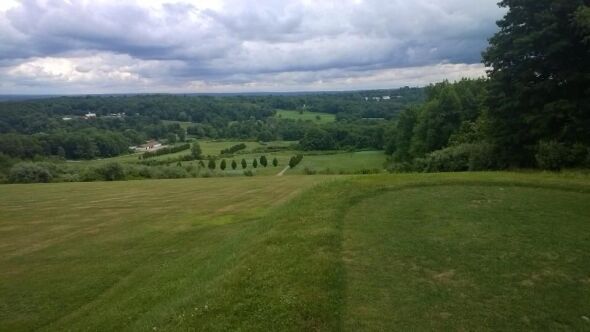 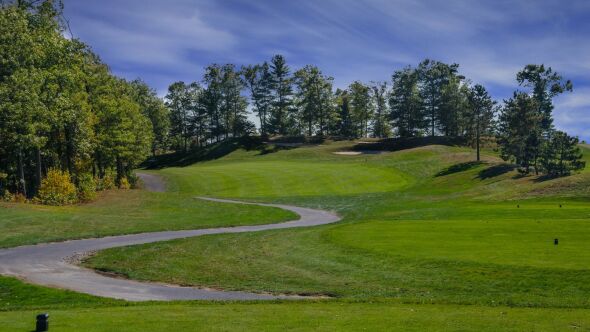 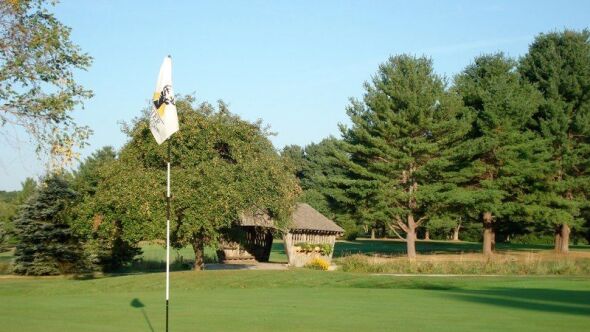 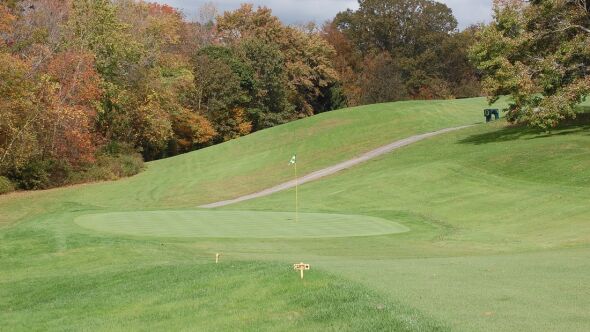 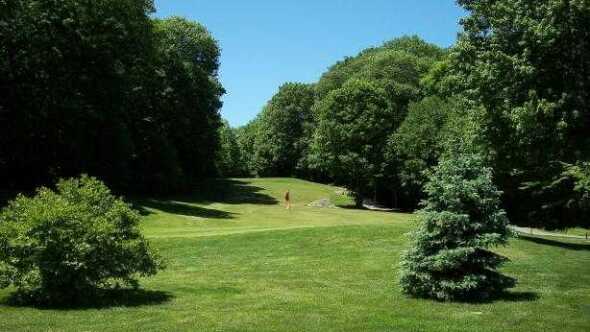 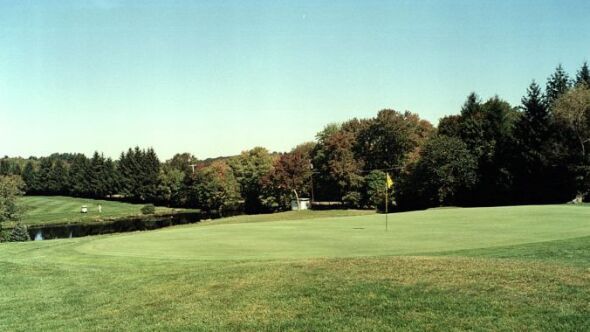 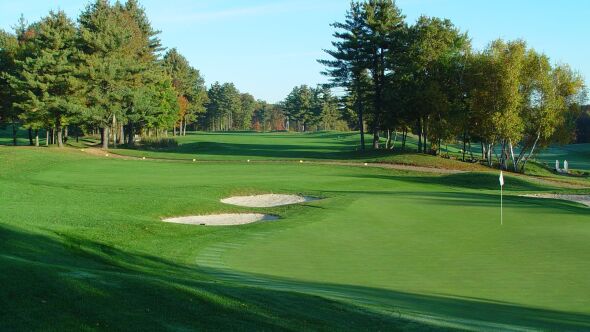 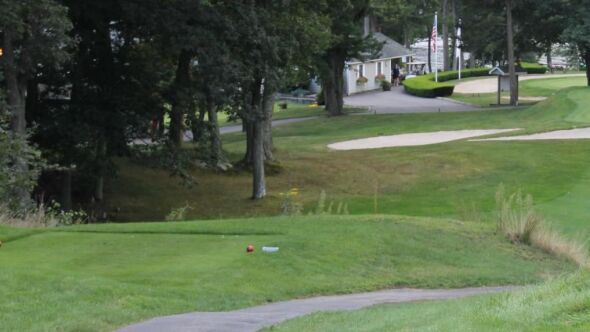 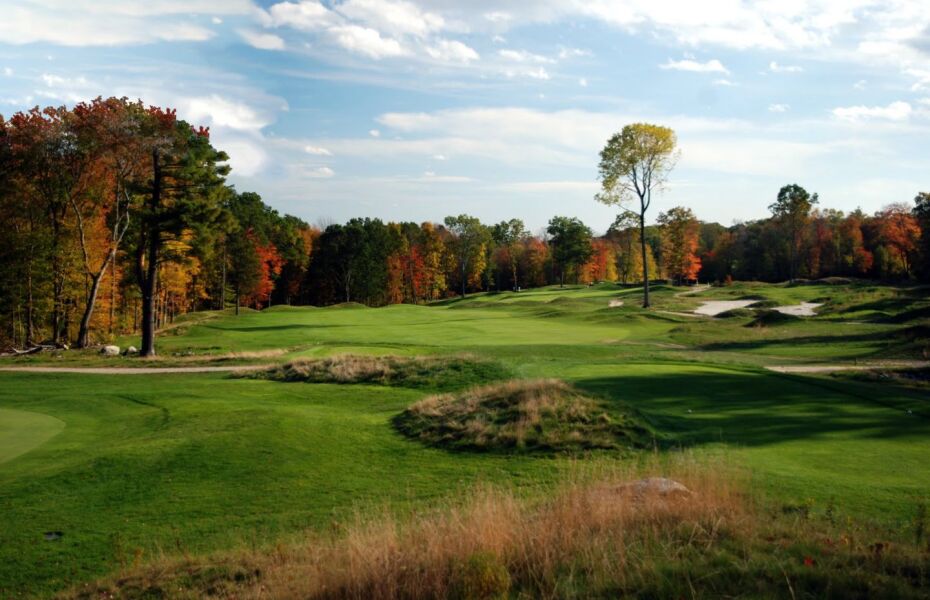 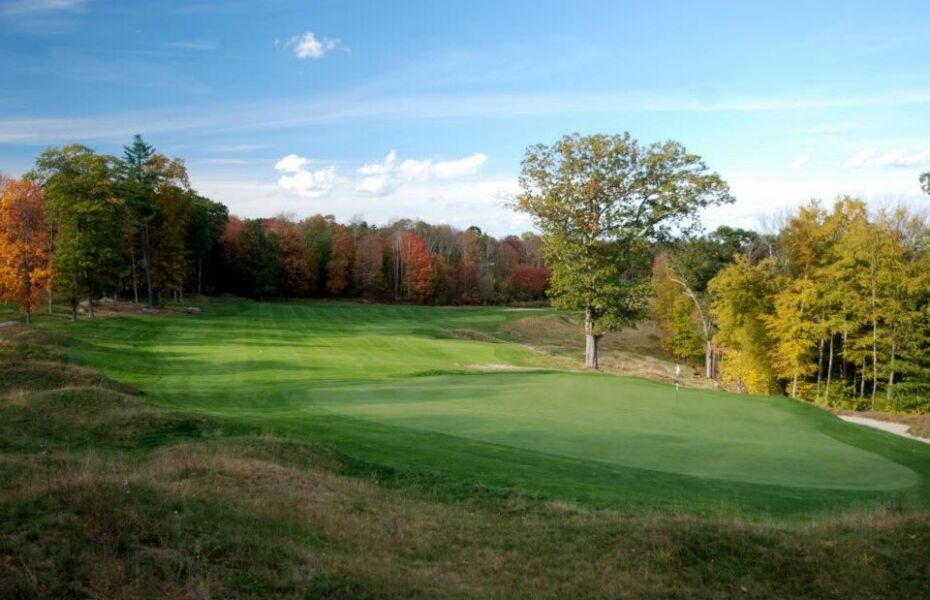 A view of the 3rd hole at Connecticut National Golf Club 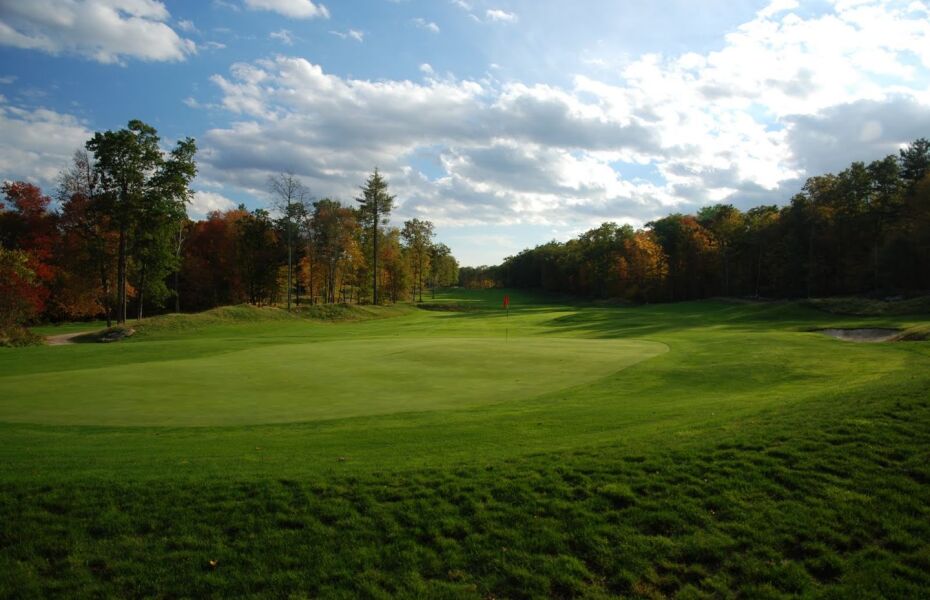 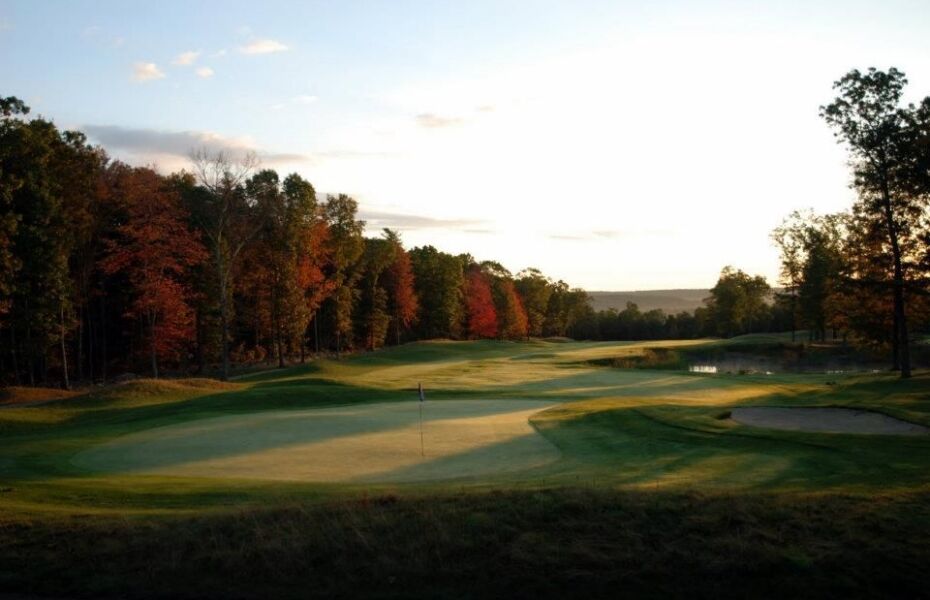 A view of the 14th green at Connecticut National Golf Club 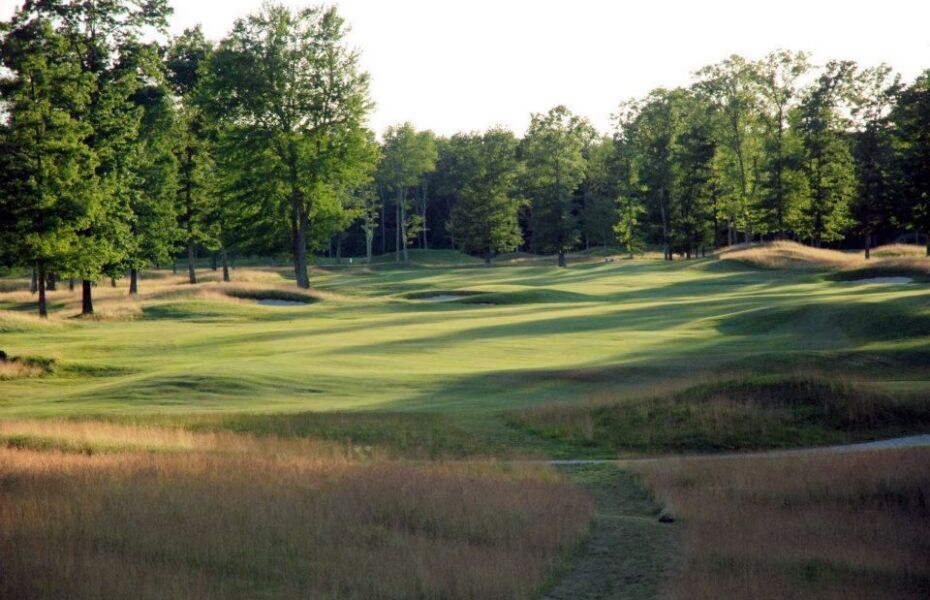