Mission Hills Country Club in Northbrook opened in 1926 and over the years it has become a local favorite. The championship golf course measures to 2,897 yards from the back tees. Although it may seem relatively short by modern standards, the layout is spread across more than 130 acres of rolling woodlands that provide a spacious feel. Mature trees tightly line the fairways and there are several holes where water comes into play. This seemingly mild golf course is tougher than it first appears. It will test both your accuracy and course-management skills. Mission Hills Country Club's finishing hole is a demanding par 4 that features the most difficult green to putt with a lake to the left and sand bunkers all along the right. You'll want to keep your approach below the hole when you attempt to tackle the green.

Course Challenges Include:
Narrow Fairways 23
Water Hazards 13
Bunkers 10
This course/club is great for:
Locals 16
Seniors 6
This Course's Location is:
In the 'Burbs 26
Convenient to the City 7

This is not golf course. Look like construction area

Course is not in great condition. Greens are not cut. But a cheap course to play. No one there so pace of play is awesome.

This course is an absolute disgrace of a golf course. I played here once 2 or 3 years ago, and it was okay, nothing special. I went back last week, and the course has really taken a turn for the worse. The maintenance of the course is very bad; the greens are the lengths of fairways, and good luck finding a ball if you are even a little off the fairway. The course has been reduced from a 18 hole to a 9 hole course, and the order of the holes is absolutely goofy. Do not try to walk this course on a hot day; it is more like walking 18.

I am by no means a golf snob, but I do have some standards and expectations, and I walked off this course after 2 holes. Spend your money elsewhere.

Horrible, worst course I ever played, run away

This course is a disgrace, never see a course in such a bad condition!

This used to be a 18 hole couse that get transformed to a 9 hole.
Not a bad thing if the owner takes care of the remaining 9, but they don't.
The layout is super strange, making you walk almost 18 even if it's a 9... you'd better have a cart.

Talking about carts, most of them are defective (flat batteries), the guy at the pro shop was kind enough to save me few bucks and the pain of being stranded.

The course itself is awful, looks like it hasn't been maintained in weeks, fairways and greens haven't been cut for at least 10 days. Dandelions all over the fairways, bunkers were full of weeds.

we had a couple of rainy days, so course was cart path only.

Still a couple of carts worked. I was stuck behind a 5 some of drunk kids, skidding all over the place.

Of course, no ranger.

My 2 cents, either the owner care and needs to shutdown the course immediately until things are back in order or just sell the land, and build some extra condos, it'll be a better use of his money.

This golf course, staff and food were all a pleasant surprise this year compared to the previous years I have played their. Defiantly worth it!

This course took a little bit of a decline when they went to 9 holes, but the new guy running the place, Richard, has it headed in the right direction. It is extremely well priced. Cannot beat the deal.

The fairways are beautiful. They put fresh sand in the traps. The greens are being well kept and Richard informed me that they just invested in a new green mower that will have these greens in line with the greens at top country clubs in the area.

The fountains are beautiful. We saw a snapping turtle when we played.

The course is challenging, but not too challenging. Definitely a great place to hone your skills.

Richard also set up a driving range outside, which is nice to get a couple swings in before your round.

Last, the grill is a very nice touch. Seriously, they serve some of the best french fries I've had. The hot dogs are not too shabby either.

We signed up for a membership, which is also very reasonably priced. I will definitely be going back here several times over the summer.

changed from 18 to 9 hole course

Course was very good when it was 18 holes a couple of years ago (last time I played here). Played Sunday morning, no one on course...took our time, it was very relaxing. I was skeptical after reading recent bad reviews. Found it surprisingly not so bad, Because of the construction of 9 holes of course to residential, its going through changes. Hole 7 was fun to me due to construction barriers. Only complaint is the greens have many patches everywhere which made putting very challenging. Hey, for $10 to $15 w/cart...one should not complaint too much.

STAY AWAY DONT WASTE YOUR TIME

WORST GREENS, POORLY LAID OUT, we were the only ones one the entire course now we knew why

This course is so bad. I can't believe I played it. The bunkers are pretty much gravel, and there are tractors on the par three. The greens are pretty much bunkers, and have bushes in them. There was a man on tehe course that kept yelling at us for playing regular golf. This course is equivalent to a putting green in a backyard. I don't ever reccomend this.

Not worth deal - horrible course conditions

The pro shop was extremely helpful and gave us the lay of the land. Because the course was reduced to 9 holes the layout isn't straightforward. That is where the pleasure ended.

The conditions of the tee boxes, greens, and sand traps were the worst I have ever seen. Ever! I can't believe that anyone would pay to play here. Since we got such a good deal and it was such a beautiful day we put ip with it and made the best of it.

There were weeds growing on tee boxes and on fringe of greens. I have never had to put through weeds. The greens were bumpy and unpredictable. it was like miniature golf. I was shocked when I saw golfers in front of us walking through sand traps as if they weren't there. When I got up I realized why. They were like asphalt. No joke.
I even put out of one just for fun... made it onto green.
Wish I had taken a few pics to document.

I wish I would have read the reviews. I agree with one, the young man in the pro shop was very helpful and friendly, but the course conditions were HORRIBLE. How about hitting over a chain link construction zone on a par 3? Or weeds growing in the sand traps. Bumpy greens, animal traps on every hole, the list goes on. It seems pretty obvious they are about to shut down.

I wouldn't recommend this course.

The condition of golf course was terrible.
greens were bumpy and slow. It used to be well maintained golf course.

I had played this course last year when it was still 18 holes, and I enjoyed it then, even though it was a little ragged around the edges. I found a great deal on Golfnow.com and had another older voucher for a single. When I called to book my tee time, I asked if a a could bring a partner and use both vouchers; the reply was no problem: both vouchers would be honored at one time. I had read several recent reviews about the awful conditions of the course since it was downsized to 9 holes and the poor management, so I warned my partner not to expect much. We arrived at the clubhouse much earlier than our tee time and were amicably greeted by the Golf & Facility Manager, Richard Mack. He told us we could go off whenever we were ready and explained to us what had happened to the course and why it was now 9 holes. He then went the extra mile, took out a scorecard, and explained the locations and basic routes to get to each hole. Even though we had gotten a heavy rainfall the night before, the course was in above average condition. The rough was not very long and fairways trimmed neatly. The greens do need some work, but for the most part, they were very doable and held most wedge shots. The course was not crowded for a Friday morning, and we finished in less than 2 hours. We both agreed we would do a repeat here in the near future, as we both enjoyed our rounds. We then met again with Mr. Mack who has been the course manager for only a month or so, and he explained in detail what he was doing to make the course a much better place to play (which was evident by the number of workers seen on the course). All in all, a very good experience. For you doubters who gave lousy reviews, give Mission Hills another shot when GolfNow has a Hotdeal; you won't go wrong!

Found out when we arrived it is now a 9 hole course. Horrible greens, muddy fairways, unkept conditions everywhere. We had a fast cart, but that is the only + from this dump.

The greens are deplorable, the traps are ridiculous. Apparently the management isn't being funded to support necessary maintenance and/or upgrades to meet standards of quality play.

First time I have played this course in 10 years and the greens are the worst I have ever seen on a course. The fairway has been ravaged by skunks and are all dug up. Sad

I'm a glass half full sort of golfer when it comes to course reviews, but this course was exactly appalling. I'm not kidding when I say I don't think anyone has looked after the greens, tee boxes, or traps all year. The greens are completely dead and dried out, the traps have loads of weeds in them or filled with mud (not wet sand, mud). The tee boxes are all eaten up, to the point you're hitting on sand/dirt on the par 3s. The rough was unbelievably long and just not looked after, just overall really really disappointing.

I played this course two years ago and it was in good shape. Since then, they have just totally let it go. Last year, it was in considerably worse shape, but I figured I would give it a try again today hoping for improvement- no such luck. Even worse than last year (considerably). I think there was only 2 people working- girl in the clubhouse and the guy working the grill. No starter, no ranger, no club pro to be seen.

I paid $30 on a "Hot Deal" and I wouldn't play this course again for $10. My other playing partners agreed unfortunately. 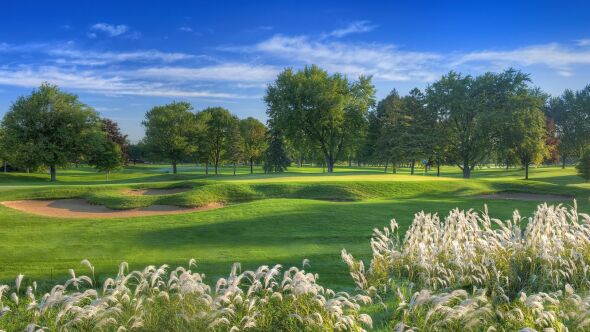 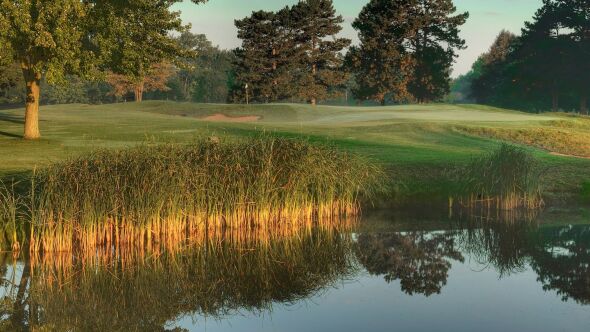 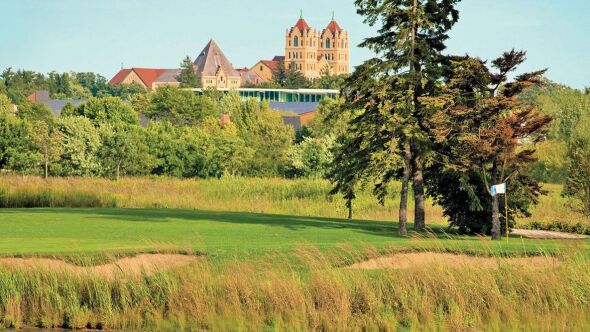 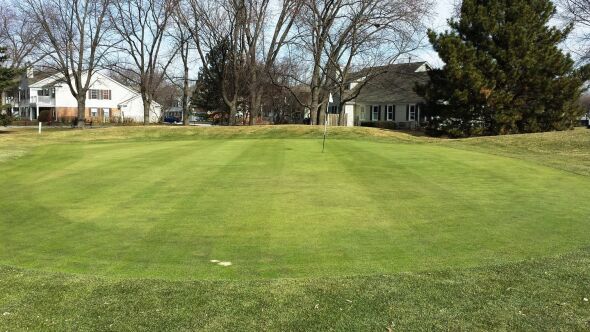 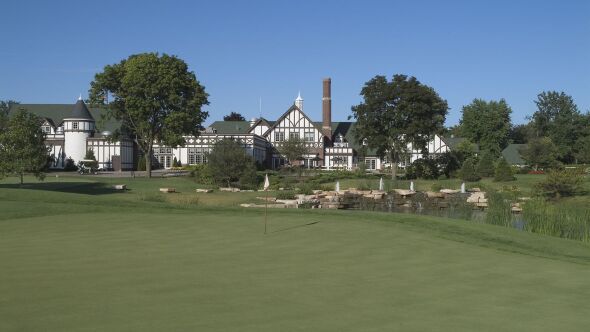 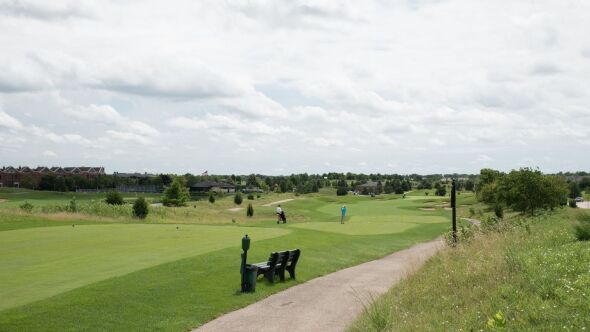 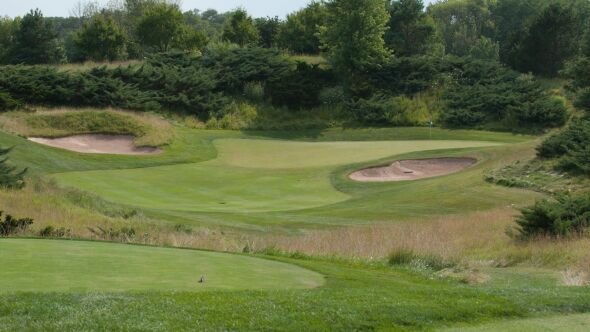 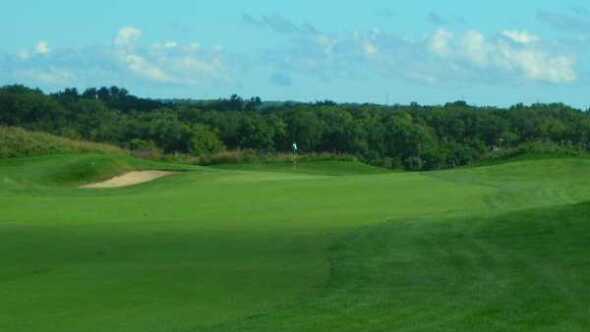 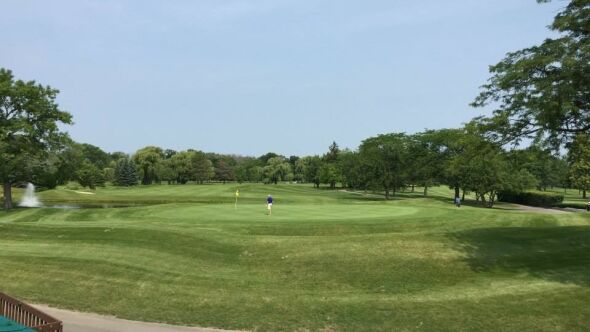 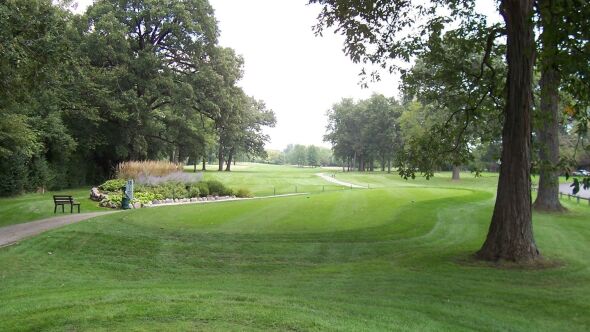 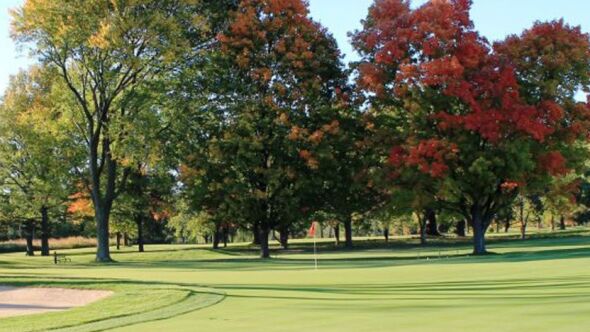 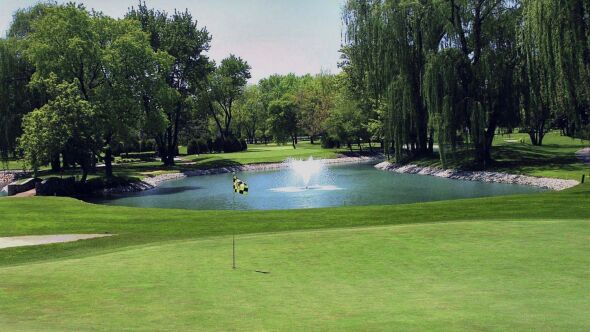 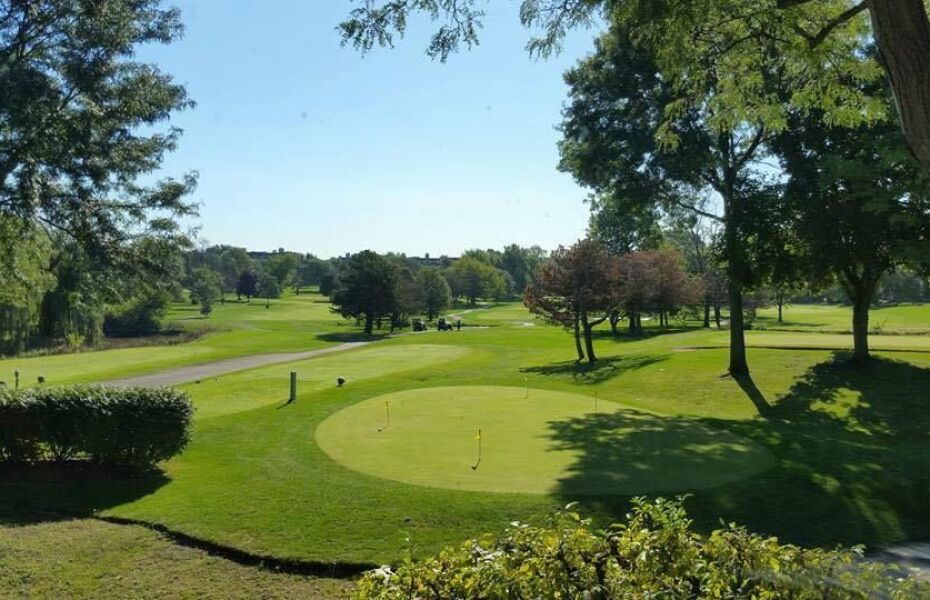 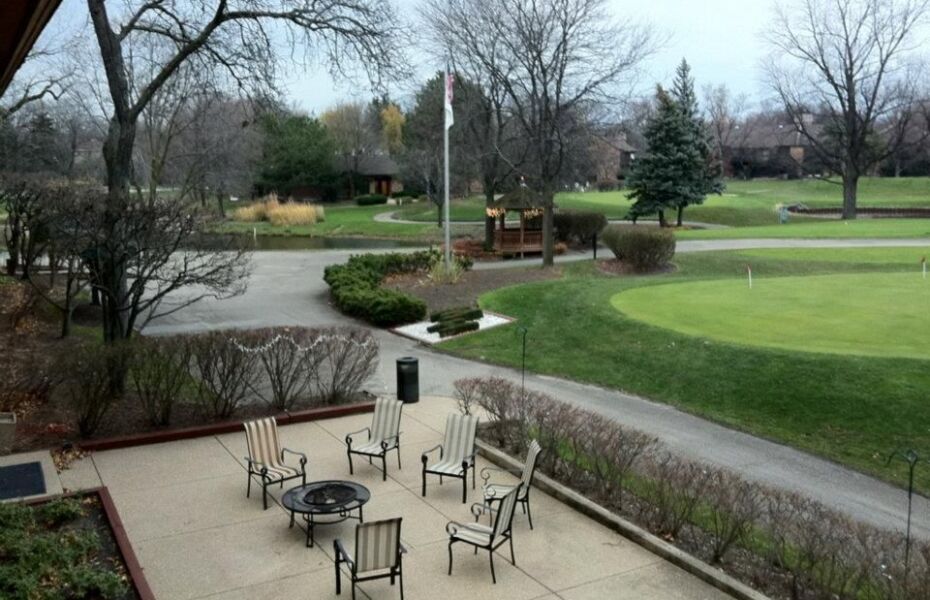 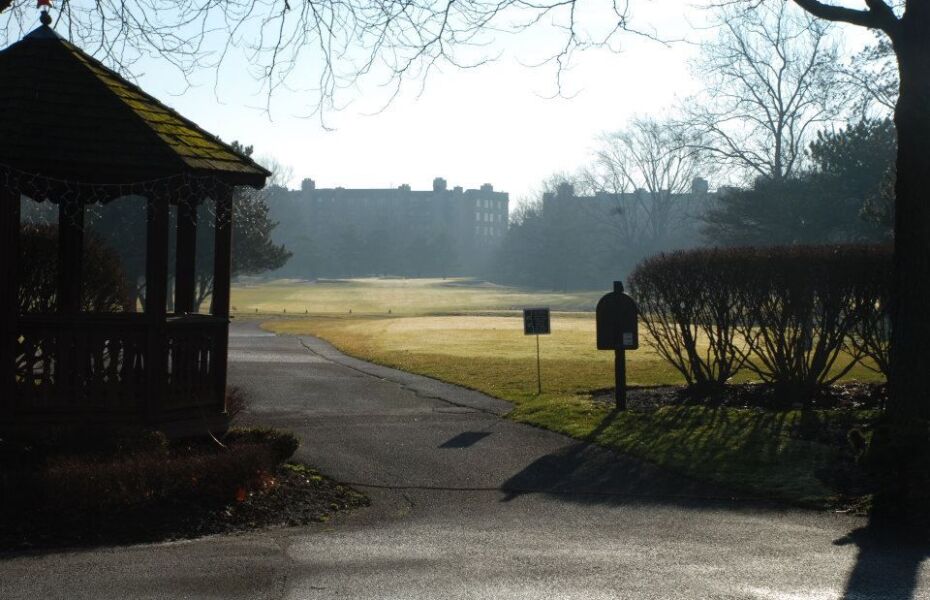 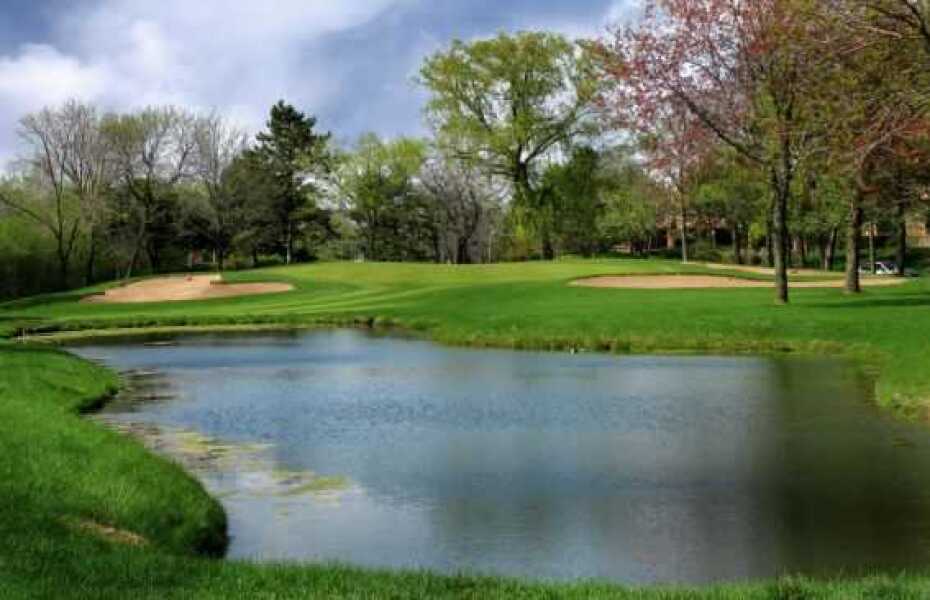 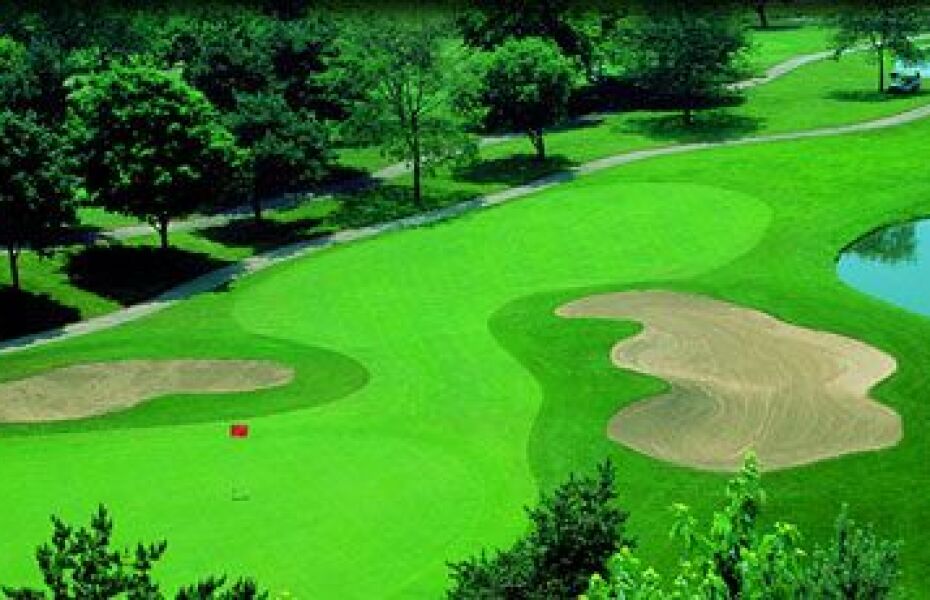 A view of hole #5 at Mission Hills Country Club 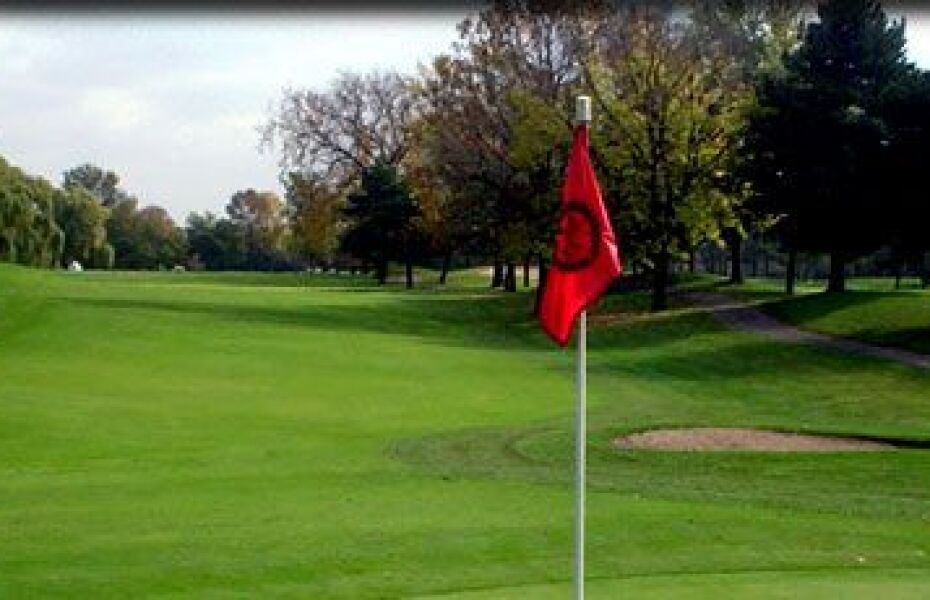 A view of the 8th green at Mission Hills Country Club 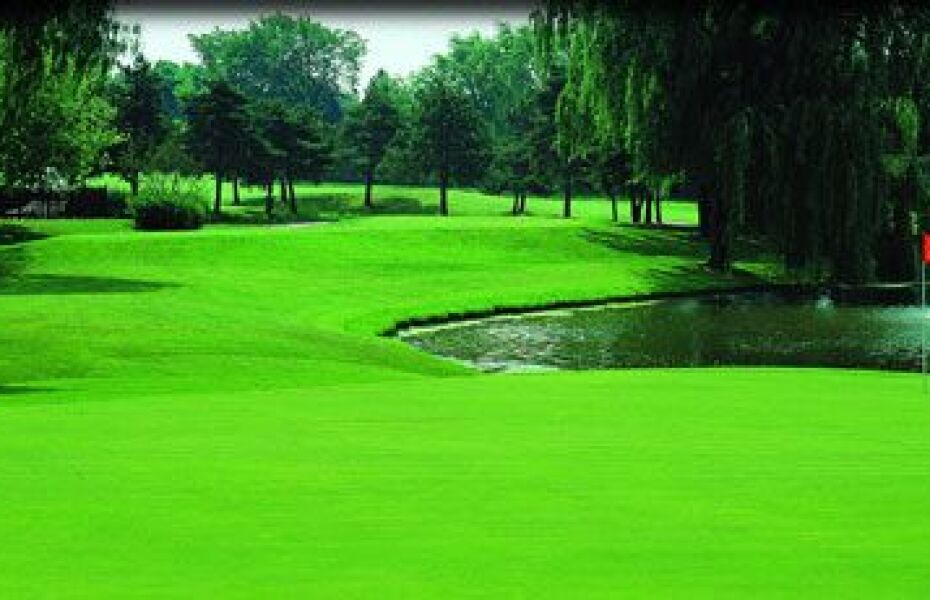