Patrick Reed's and other Rules of Golf run-ins are a reminder to brush up.

In an era where hot takes are the currency of the sportswriter, I’ve got one that’s downright lukewarm, or at least ought to be:

Professional golfers should know the Rules of Golf better.

The latest high-profile Rules episode started with eventual Farmers Insurance Open champion Patrick Reed on Saturday. His decidedly strange and potentially shady embedded-ball-relief situation caused a storm among media and fans whose intensity was a direct result of his past suspect behavior with the Rules.

Whether Reed intended to cheat by unnecessarily moving his ball while requesting relief that, in hindsight, wasn’t applicable is between him and his maker. Golf’s most ardent advocates take pride in the game’s self-policing nature, and any time that system breaks down, it’s cause for concern.

Though it rightly earned the most attention, a couple other odd moments followed on Sunday that suggested that when it comes to the Rules, there’s a knowledge gap, and the pros are on the wrong side of it.

Is it a new-breed-vs.-old-guard dynamic?

Holy Rules. All these basic rule situations are turning into major events. It’s not that hard

GolfChannel.com: Another turbulent ride for Patrick Reed, complete with criticism and a trophy

Does the omnipresence of officials make pros lazy? Because they can raise a hand even if one of the more common rulings crops up, do they not bother to care about knowing the Rules?

If so, this attitude sets a bad example because those of us watching at home know intuitively that the people who play for millions of dollars each week should know the Rules better than we who do not.

Let this recap of three common Rules situations from the weekend serve as a quick reference to all golfers. And if you have a friend on the PGA Tour, perhaps you can forward this along as a reminder:

How to take embedded ball relief

When it came up: Patrick Reed, 10th hole on Saturday

First, if you think your ball may be embedded, let your playing partners know. Once you've notified your playing partners, mark your ball and very carefully pluck it from its lie, then inspect the ground underneath to see if it's created a depression. If it has, you may clean your ball and then drop it within a clublength of its original lie, no nearer the hole. If it has not, you must place the ball back where it lay, without cleaning it.

Because of golf's whole self-policing thing, you should only need to call in an official if you and the others in your group cannot agree on whether the ball is embedded. In that event, under no circumstances is it necessary to place the ball to the side while waiting for the official. There is one appropriate place for the ball to rest while you wait, and that is its original location.

When it came up: Viktor Hovland, 14th hole Sunday

Even though the nomenclature has changed, for some reason – I’ll always prefer “hazard” to the anodyne “penalty area” – the procedure is the same when it comes to the drop. If the ball rolls twice either back in to the penalty area, closer to the hole or more than two clublengths, then you may place the ball at the spot where it landed on the second drop.

If the ball does not seem to want to rest at that spot (as happened to Hovland Sunday), simply find the nearest spot where you can get it to sit still. To keep things on the up-and-up, have your playing partners nearby to watch you do this.

Again, you do not need to bring in an official unless there's some doubt as to whether what you're doing is kosher.

When it came up: Patrick Reed, 16th hole Sunday

To be fair, this is the trickiest of the three rulings, but still fairly straightforward. If, having marked your ball when you got to the green, you go to replace it and it won’t sit still, you proceed in the logical way: find the nearest point where it will sit still and play from there.

One Rules change from 2019 does come into play here. In the past, if a re-marked ball moved, it was to be played from its new location unless moved by a player or outside agency. Now, as soon as a player marks the ball, he or she “owns” that spot.

As always, though, your playing partners should be involved to make sure everything is being done correctly and the field is being protected.

Rules officials are handy in unusual situations, but they should not be used as a crutch. Golf’s tradition of self-policing relies on its most serious players knowing the Rules and setting a positive example. When pros show that they cannot adjudicate simple rulings, it threatens that history of herd-integrity and reverberates to the rest of us. 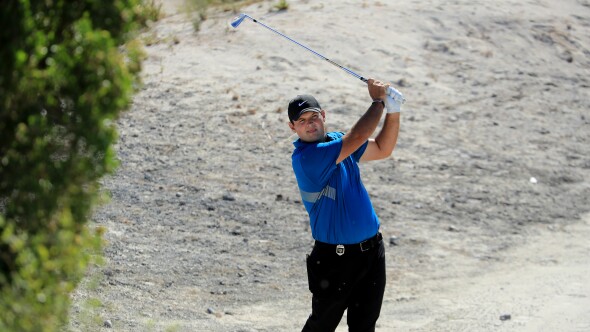 Articles
1 Min Read
The most blatant golf cheating you've ever seen
Who makes Patrick Reed look like an angel?

Why no heat on Rory McIlroy. His situation was the same as Reed’s. Rory never asked the volunteer if his ball bounced. He just marked and told his playing partners. He never asked for a ruling. Why is that?

I agree, why does Mcllroy get a free pass. He did not ask for a ruling, he decided himself. Evan the announcer Sir Faldo said if Mcllroy did it, it was ok, but if Reed did it, it was wrong. Boy is he predigest.