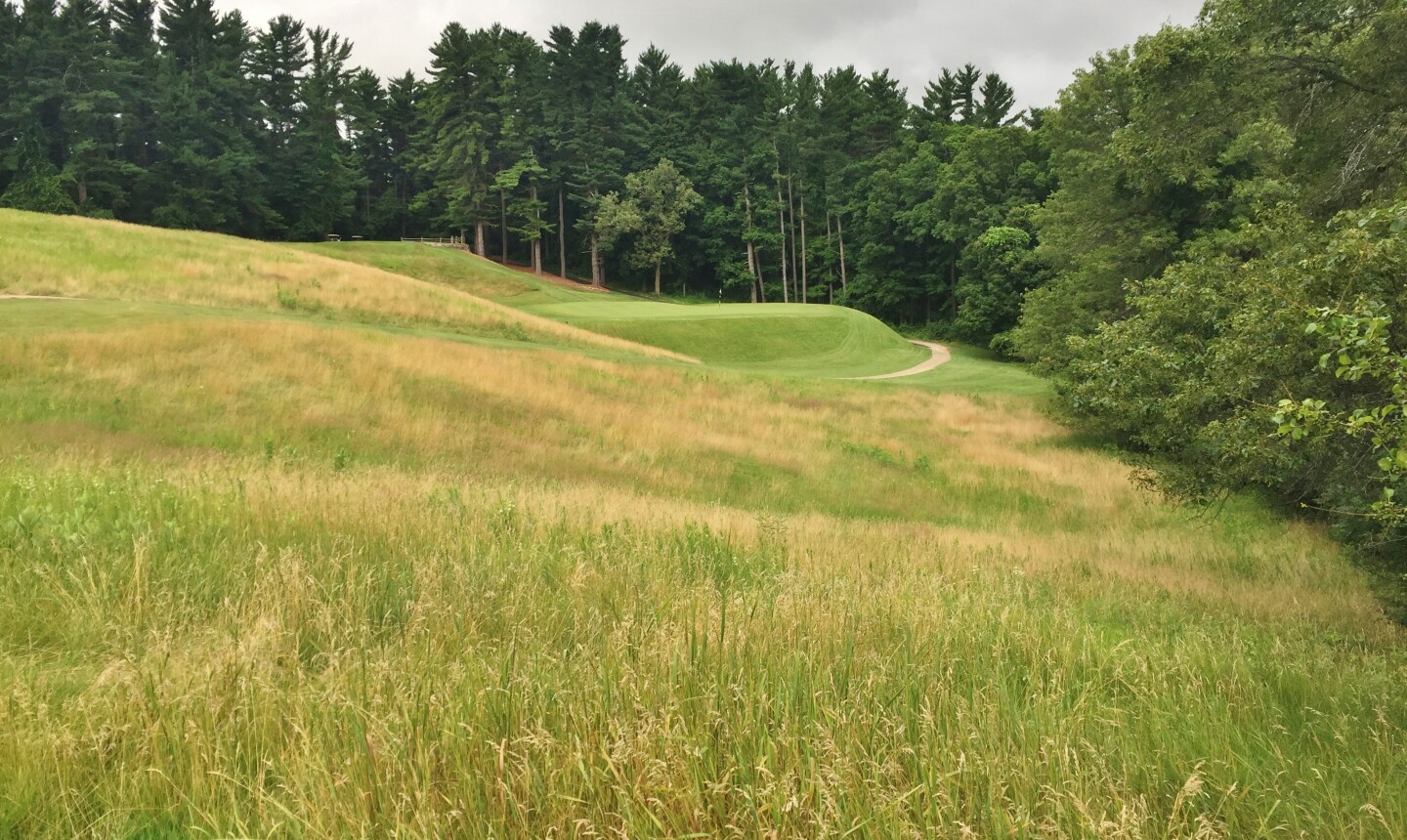 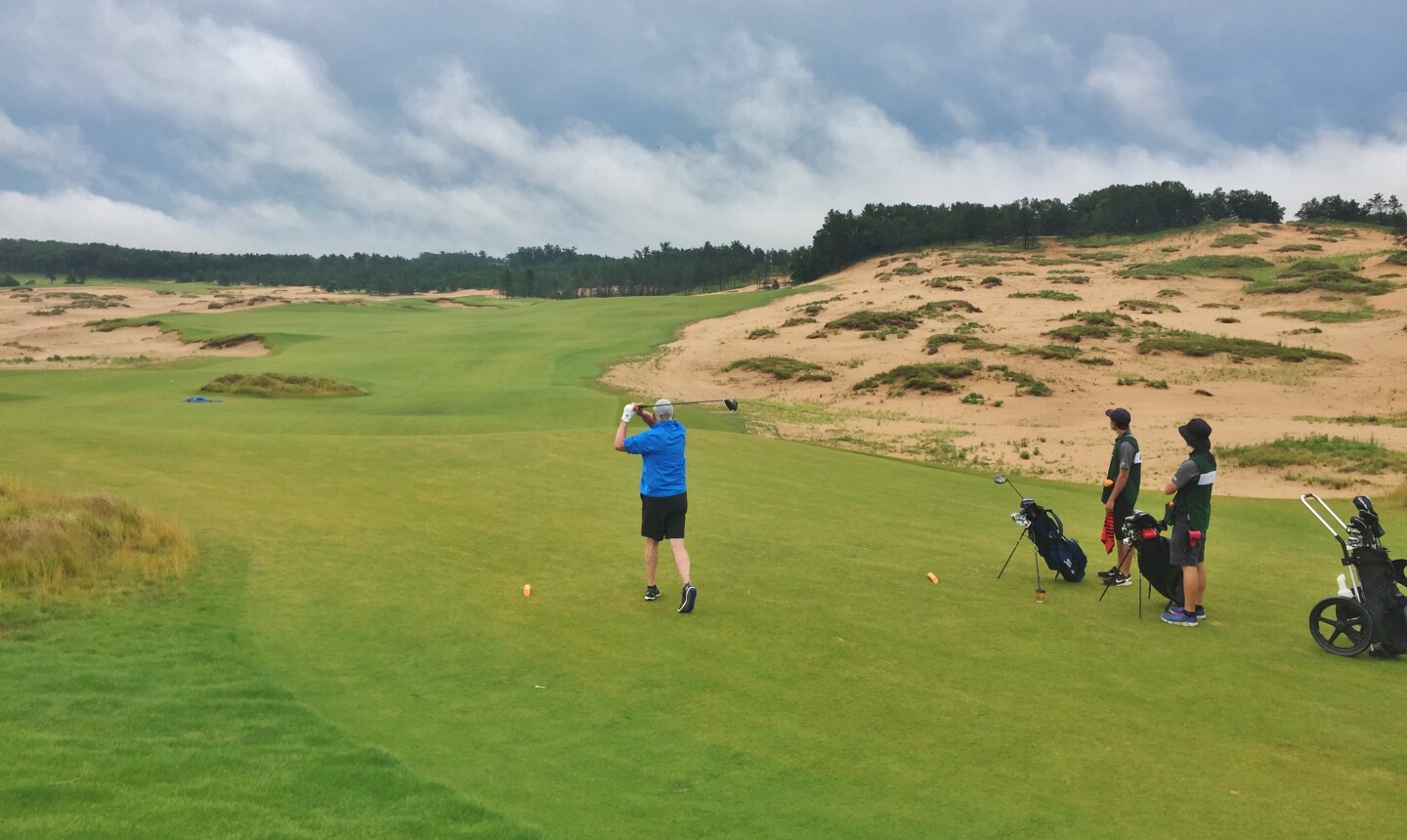 The first tee of Mammoth Dunes is steps from the clubhouse at the Sand Valley Golf Resort. Jason Scott Deegan/Golf Advisor 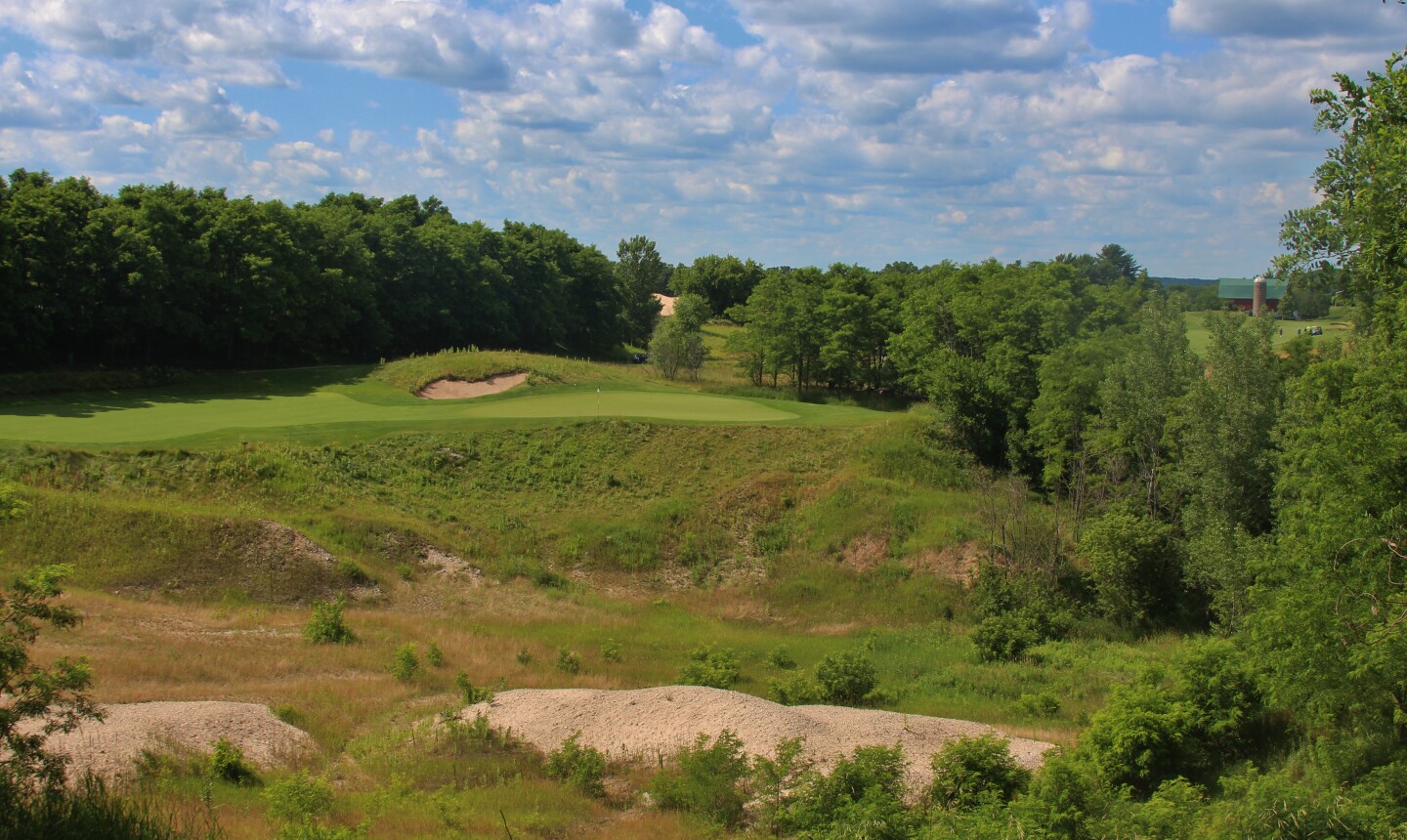 There's a hot new golf destination beyond The American Club in America's heartland. Just two weeks after the 2017 U.S. Open at Erin Hills Golf Course served as a four-day infomercial for Wisconsin, I blazed my own trail through the state's midsection. There are lots of great golf road trips in America, but I can't think of another one with such a variety of architectural styles all so easily accessible and relatively affordable.

Every stop I hit after flying into Madison - the Wisconsin Dells, Sand Valley Golf Resort, SentryWorld and the Golf Courses of Lawsonia - was an hour or so apart, making travel from point to point very easy. It had all the makings of a really good "golf trail". If I had more time, I would've thrown in the region's two premier tournament venues - Erin Hills and University Ridge, host of Steve Stricker's American Century Championship, a PGA Tour Champions event in Verona near Madison.

With Mammoth Dunes set to debut at Sand Valley next summer, another breakout moment is on tap for 2018. The Straits course at Whistling Straits along Lake Michigan in Kohler might still be the king - the 2020 Ryder Cup looms large - but now maybe a few more golfers will veer west to see what's brewing in farm country.

Like Myrtle Beach or Niagra Falls, the main drag through the infamous Wisconsin Dells is quite wonky, lined with themed waterparks and rollercoasters in wild shapes like pyramids and a Trojan Horse.

The Wilderness Hotel and Golf Resort where we were staying sits around the corner from this madness. Upon arrival, my children went straight to the nearest outdoor waterslide and I headed down the road to its nearby course, Wild Rock.

Architects Dana Fry and Dr. Michael Hurdzan built Wild Rock, ranked 30th nationally and No. 1 in Wisconsin by Golf Advisor users in 2016, at the same time they were working on Erin Hills. They nailed both projects - Wild Rock to be a fun and enjoyable resort course and Erin Hills to test the best players in the world. Wild Rock's got some nice sweeping elevation changes and its back nine intersects with an old rock quarry, setting up a strong finish.

The Wilderness, home to four indoor and four outdoor waterparks, is the largest waterpark resort in America; its 1,100-plus rooms spread across 600 acres. I'm not ashamed to admit getting lost walking from our palatial three-bedroom suite at the 460-unit condominium-style resort, the Glacier Canyon Lodge, to find the resort's Wild Canyon Café for a breakfast buffet. My children hunted down multiple waterparks and arcades to turn their Extreme Fun Passes into adventures in mini-golf, laser tag, go-karts, indoor ropes course, indoor bumper boats and more. This is easily one of the best golf resorts for families in America.

That night, I celebrated winning my match on the 18th hole by dining on lobster bisque and steak at Fields at the Wilderness, perhaps the finest restaurant in town.

On the road early the next morning, it was amazing to witness the touristy strip transition into the secluded woods of Trappers Turn, a 27-hole course co-designed by Wisconsin native Andy North and Roger Packard.

Each nine - the Lake, Canyon and Arbor - is named after their most unique features. The canyon had the most elevation change and best hole, the rocky par-3 seventh. The Lake starts with a daunting par 4 along the water and ends with a tricky tough par 5 going in the opposite direction on the other side.

Turns out, I timed my Sunday morning round perfectly. People come from all over town to savor the club's prime rib Sunday Brunch. The food was excellent, so good that I came back that night for dinner, including an appetizer of the "Largest Cheese Curds in Wisconsin".

After a day off to explore the resort, I couldn't leave without seeing a local tradition, the Tommy Bartlett Water Ski Show. Resort guests get free tickets to enjoy a couple hours of wholesome family fun. A variety of acts and entertainers performed on land and Lake Delton. The pyramid of water skiers crashed. Thankfully, the guy jumping rope on the human hamster wheel spinning 40 feet in the air didn't.

Day 4: Off the grid at Sand Valley

I bid goodbye to the children with a last hurrah - a morning session of zip-lining at the resort - before hitting the road. My GPS got me within a couple miles of Sand Valley, but not entirely there. That's how off the grid Nekoosa still is. Mike Keiser's Sand Valley has all the look of a Bandon Dunes Golf Resort clone. Why not copy the successful formula of golf's most popular resort? My threesome might have been the only group walking the Bill Coore-Ben Crenshaw Sand Valley course that debuted in June without a caddie. Our scoring probably suffered as a result. In particular, the blind shot on the par-3 17th hole really spooked me.

After a nice dinner on the patio, my partner and I chased the sunset for a sneak peak of Mammoth Dunes. Even with such a small sample, it sure felt like David McLay Kidd's design was destined to be the headliner. The six holes we saw were bold and inspiring. Three more opened in August.

A yet-to-be-named 17-hole short course by Coore/Crenshaw - in the vein of the 13-hole Bandon Preserve - might be ready by next season, as should more nearby lodging. This place has grown from nothing to something in a hurry. (See more from Jason Deegan on Sand Valley.)

Day 5: A rebirth in Stevens Point

SentryWorld Insurance has done a lot for golf over the years. SentryWorld's Robert Trent Jones Jr. course was Wisconsin's first destination daily-fee course when it debuted at the company headquarters in Stevens Point in 1982. Just last week, it was announced that the company will sponsor the newly named Sentry Tournament of Champions, the winners-only event on the PGA Tour at Kapalua on Maui every January.

Part of the allure of this newly minted golf trail I envision in central Wisconsin is its different playing experiences. In less than 24 hours, I was trading the firm fescue fairways and yawning waste bunkers of Sand Valley for water (10 holes) and trees everywhere at SentryWorld.

A 2015 renovation by original architect RTJ II associate Bruce Charlton and former associate Jay Blasi modernized SentryWorld, adding length (stretching it from 6,900 yards to 7,145 yards) and new "Better Billy" bunkers, while also smoothing out more user-friendly contoured greens and altering nearly every hole. In certain cases, holes that received the most complaints (like the original no. 17) were completely redesigned. Premier conditioning is now the norm.

The legendary flower hole, the par-3 16th, lived up to expectations. It's a little nerve-wracking hitting to a green surrounded by 36,000 flowers hand-planted into new colorful patterns every season. The flowers are played as ground under repair, so any shot that lands within the beds gets a free drop on grass. I hit an easy 7 iron to the front of the green and two putted for par.

After the round, I dined at PJ's, a cool restaurant/bar with entrees you just don't see served at other golf clubhouses. The one knock on SentryWorld is the lack of resort-style accommodations. Several local hotels sell packages (the closest I could get was the Hampton Inn Plover-Stevens Point several miles away), but you could just as easily stay another night at Sand Valley if necessary.

In my wildest dreams, I couldn't envision what I'd find at Lawsonia, a 36-hole spread in tiny Green Lake. The first surprise was the Heidel House Resort & Spa, a fine retreat with live music on its outdoor patio and an indoor/outdoor pool complex, both overlooking the lake. Lawsonia does offer several houses to rent on property as well.

The Woodlands, a nice routing through the woods, serves as the foil to the famed Lawsonia Links, a top-100 classic dating to 1930. The Woodlands doesn't get the credit it deserves for being a nice backwoods track. There are no bad holes, and plenty of good ones.

It was my round at Lawsonia Links that blew me away. The William Langford and Theodore J. Moreau masterpiece lived up to its "links" name with back-to-back blind tee shots to start. Before you leave the first green, check out the severe drop-off in back. It's these dramatic greenside walls and random fairway berms that give the course such character. You just don't encounter them often elsewhere, unless you're playing a prestigious private club dating back to the Golden Era of architecture. An aggressive tree removal campaign by architect Ron Forse in recent years has restored the integrity and look of the layout.

The magic moment comes at the 161-yard seventh hole, the par-3 known as the "Box Car Hole." Legend has it that a railroad car was buried under the green to create such an extreme 20-foot fall-off on the right. Care to guess where I ended up?

The rolling land kept me constantly engaged, a worthy grand finale from a cool golf trip I won't forget.