A world without links golf? New report suggests rising seas will make it so 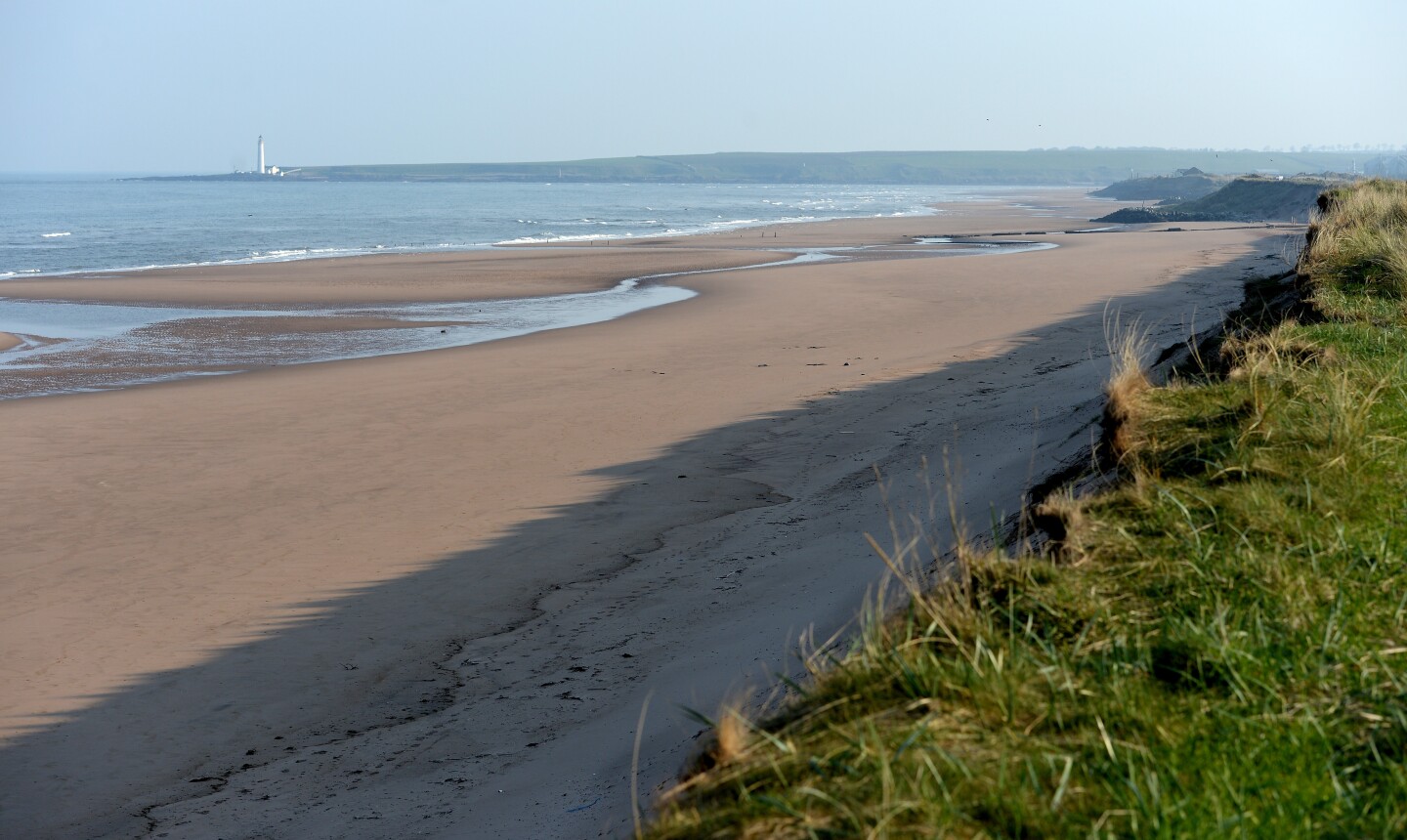 A view of the Scurdie Ness Light House seen from behind the 2nd tee on the Montrose Medal Course at the Montrose Golf Links. Ross Kinnaird/Getty Images

Pure links golf courses are among the game's rarest and most fragile type. They're also increasing in popularity among golf travelers. And according to a recent report, they could very well vanish within a few generations.

An article published by BBC revealed a recent study that is predicting a dire future for many sporting venues in the U.K., from coastal golf courses to cricket and football pitches — all of which will be lost in the coming years as sea levels rise.

The gist of this doomsday report for U.K. golf and sporting enthusiasts can be summed up in this particularly dire sentence:

"Only a small increase in sea-level rise would imperil all of the world's links courses before the end of the century."

While I have my doubts that ALL links would be affected (my guess is clifftop Pennard Golf Club is pretty safe), it's certainly not a stretch to say that those lower-lying links courses around the world are a vulnerable breed. The report specifically mentions Montrose Golf Club, one of the oldest clubs in the world and just up the road from 2018 Open host Carnoustie, as one that is dealing with rising seas right now:

Research published by Dundee University in 2016 showed the North Sea has crept 70 metres towards Montrose within the past 30 years. Chris Curnin, director at Montrose Golf Links, said: "As the sea rises and the coast falls away, we're left with nowhere to go. Climate change is often seen as tomorrow's problem - but it's already eating away at our course. "In a perfect storm we could lose 5-10 metres over just a couple of days and that could happen at pretty much any point.

Many links golf courses in the U.K. and Ireland have been well aware of their ecological fragility for years. A few years back when I visited one of England's oldest links, Royal North Devon, members I played with were well aware of erosion eating away their beachfront holes. The BBC profiled the club's risks last month).

Then there is the much more high-profile case of Trump International Golf Links Ireland (formerly Doonbeg), which recently received permission to install a 1km coastal erosion wall among other pieces of infrastructure to combat the seas on this rugged piece of the Emerald Isle. In 2014, a harsh winter storm devastated the coastal holes and had to be redesigned.

(The Climate Coalition is an advocacy group that describes themselves as such: "Along with our sister organisations Stop Climate Chaos Cymru and Stop Climate Chaos Scotland, we are a group of over 130 organisations — including the National Trust, Women's Institute, Oxfam, and RSPB — reaching across the UK to show our love for all the things we want to protect from climate change, and to ask politicians to put aside their differences and commit to doing whatever is necessary to protect them.")

So where does Coul Links, the proposed new links golf development in the Scottish Highlands near Royal Dornoch by Mike Keiser fit into all this? Despite high optimism last year that the project was a go, environmental concerns over local wildlife and the site of special scientific interest have slowed progress. But all things considered, it appears from several reports in January from U.K. like this Scotsman report, that ongoing negotiations are moving forward and Keiser and his associate Todd Warnock remain optimistic the Bill Coore & Ben Crenshaw-designed links will get the green light.

Brandon Tucker
Brandon Tucker is the Sr. Managing Editor for GolfPass and was the founding editor of Golf Advisor in 2014, he was the managing editor for Golf Channel Digital's Courses & Travel. To date, his golf travels have taken him to over two dozen countries and nearly 600 golf courses worldwide. While he's played some of the most prestigious courses in the world, Tucker's favorite way to play the game is on a great muni in under three hours. Follow Brandon on Twitter at @BrandonTucker and on Instagram at @btuck34.
16 Comments

Gentlemen - Climate change is real and being driven by human actions. These are proven facts by multiple scientific studies and computer modeling. No studies have been done to dispute these facts. Only how fast and to what extent may be in questions. A good primer source of information is "Merchants of Doubt" by Oreskes & Conway. Everyone should educated themselves so we can have a serious discussion of what we can do. I'd love to save the "links".

Juniordealer! I love your optimistic outlook that a serious conversation is even possible on 1/The internet and 2/A golfing website. Quite inspirational. Thumbs up!

Yes, climate change is real. It's been real for billions of years. The "studies" that Al Gore and Bernie Sanders use to project a 90% consensus of AGW was nothing more than asking scientists if humans influence the climate. Of course we do, simply lighting a single match technically influences the climate. To say that humans are the main driver of climate change completely ignores natural factors that are strong enough to cause mile high glaciers. Since the last glacial period ended 20,000 years ago the sea level has risen 120 meters. Meters... not mm, not inches, not feet. And in the near future the climate will go back the normal 100,000 year glacial period, and global temperatures will drop an average of 12°C/54°F. Snow will fall, glaciers will form, sea level will start going down, land bridges will allow people to walk to Australia, UK, Alaska. It will be too cold and snowy for most of us to golf, all of the courses in Scotland will be covered by a glacier. Nature is far more powerful than humans.

Thanks for the video. 120 meters is an awful lot of ice and climate change will happen with or without humans, but scientific studies and modeling have proven that the sharp rise in carbon dioxide since the 1800's is being driven by human activity even taking into consideration other forms of natural CO2 emissions. The question is - should we be worried and, if so, what can we do?

You know, let's get real. With golf's popularity allowing many courses to close, especially is USA, I really don't care much if a few links courses in Great Britain go underwater. In the bigger picture, I'm more concerned that the universal greed for hydrocarbons is affecting the world's climate, leading, by the way to rising oceans and loss of coastal lands, including and unfortunately to loss of a few links courses. And, as an aside, I'd loose no sleep if Trump's course goes underwater after the disgusting way this moron treated the fine people of Scotland.

Eugene you ignorant slut....the history of golf is on these links....regardless of who their current guardians might be....but the hate from the left must be spewed at every opportunity.

Now wipe your ass and go to bed

What a crock of bs.

GLOBAL WARMING AKA CLIMATE CHANGE IS ONE HUGE CROCK OF B.S. THAT HAS ENABLED ALGORE TO MAKE 100 MILLION DOLLARS AND OTHERS TO MAKE SMALLER FORTUNES BASED ON A FRAUD. THE EARTH IS OVER 3 BILLION YEARS OLD AND HAS GONE THROUGH MANY CHANGES IN CLIMATE-FROZEN FROZEN WASTES TO TROPICAL JUNGLES AND OCEANS AND DESERTS ALL LONG BEFORE MAN EVEN WALKED HIS FIRST STEPS ON THE PLANET..REMEMBER MAN HAS BEEN A FACTOR FOR ABOUT 20000 YEARS AT MOST IN THE 3 BILLION YEARS OF THE EARTH'S EXISTENCE.. THINK RATIONALLY AND FORGET THE LIBERAL LOONS LIES AND BULLSHIT.

Funny how sickness trump sites climate change when it suits his dumb ass!!

You statement makes no sense, they are building a wall to protect the course in the event the ocean does rise, just as we want to do to protect our country.

Trump is a categorical climate change denier. He has sacked people for merely mentioning climate change. Yet when applying for planning permission............ Guess what...... That's right be sure the reason for needing to build a defensive wall is due to climate change..... Do one... Mug!

Millions of dollars to be made on those rising sea levels! Just ask Alford. Follow the money, truth be damned.

Too many expensive Golf courses already 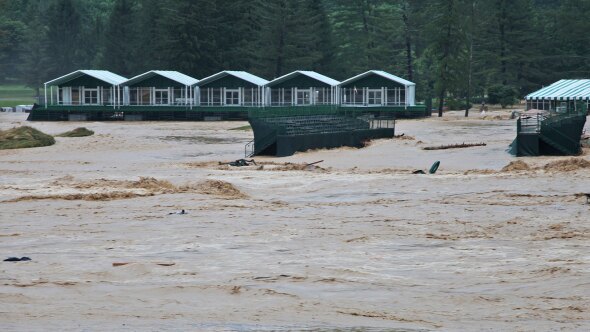 Articles
More notable courses affected by natural disasters
Golf courses around the world have fallen victim to natural disasters. Here's a look at some of the most notable events, and what happened next.
6 Min Read 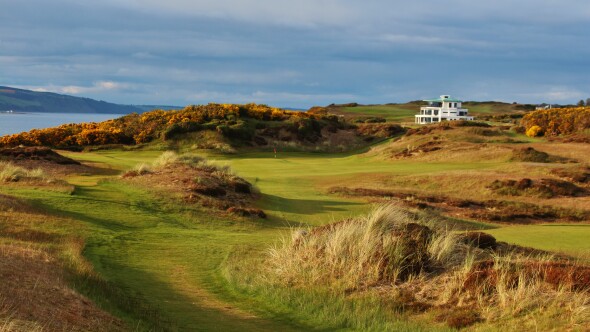 Galleries
Scotland's 10 most scenic links courses
Selecting the 10 most beautiful links in Scotland isn't easy. The truth is almost every links has at least one postcard moment. Here are Jason Scott Deegan's choices.
10 Images

Tim Gavrich
Senior Writer
Now Reading
A world without links golf? New report suggests rising seas will make it so
Search Near Me