Where the players play: Spotlight on Houston's Champions Golf Club, host of the U.S. Women's Open

The club, founded by Jackie Burke Jr. and Jimmy Demaret, stakes claim among the state's most reputable for players.

HOUSTON — In Texas, the oldest golf clubs aren't necessarily the most historic.

Rather, many of Texas' A-list clubs are the result of unique associations with a hall-of-fame Texas golfer: Harvey Penick and his pupils Tom Kite & Ben Crenshaw among numerous others at Austin Country Club (current site: 1984); Jimmy Demaret at Onion Creek Country Club (where the Champions Tour was founded in the 1970s); Ben Hogan at Colonial Country Club in Fort Worth.

Champions Golf Club, located just north of downtown Houston, is on the shortlist of the state's most prestigious clubs, and yet it was established by Demaret and Jackie Burke Jr. in 1957, well after the "Golden Age" of golf course development that combined the Roaring Twenties with advances in golf course architecture. Nevertheless, Champions' pedigree is as sterling as any Lone Star State club.

Unlike so many of Texas' private clubs, there is no gated entrance into Champions' community. Its parking lot and clubhouse is about a mile from a main business artery and it will sneak up on you if you aren't looking for it. They commissioned golf course architect Ralph Plummer to design the original 18 holes, the Cypress Creek. Several years later, architect George Fazio laid out a second 18 holes, the Jackrabbit Course. It's hard to believe there are 500 acres here for 36 holes and the mature and shady residential community.

Champions is also bordered on the north side by Raveneaux Country Club, but perhaps for not much longer. Having already purchased 21 acres from the club, Harris County has been negotiating to purchase an additional 206 acres and convert it to a stormwater detention basin.

Today's aura on the grounds at Champions can be attributed to Burke's presence; he still has an office there and regularly spends time at the club. Prospective members must be single-digit handicaps and will vividly recall their first meeting with him upon joining. Memorabilia is everywhere, including the famous picture of Burke being hoisted into the air following his win as a Ryder Cup captain in 1973. Stacy Lewis is among those accomplished members at Champions, as she carries the torch for the club in its first women's major championship.

"There are so many great amateur players are members here," said Lewis, who joined as a member when she returned to the area with her husband four years ago. "This is where the good players come. The golf courses are hard. They're not easy."

On the Cypress Creek Course, the women will face a par-71, 6,731-yard layout with gentle doglegs, narrow fairways and thick Bermuda rough (during daily play in 2020, golf carts have been on paths only for several months in preparation), and the ball tends to sit down in it. A standout feature of layout is the par 3s. The first of them, the 4th, plays long and alongside Cypress Creek. A large, wide green allows for bailouts right, but a left pin will leave a significant two-putt for par.

The creek comes into play again on the back nine, bordering the right side of the par-5 13th hole, a long but peaceful dogleg right with a clever green complex. The putting surfaces themselves are massive, undulating and sure to cause some three-putts. Daily hole locations will dictate on-course strategy for the field.

Burke has said the course favors long hitters and good putters. Both are needed on the 18th hole, which will play 438 yards for the women and features a huge green.

Things are indeed bigger in Texas! 🤠⛳

Our @KiraDixon and Texas' own @Stacy_Lewis check out the expansive 18th green at Champions Golf Club in Houston ahead of the 75th #USWomensOpen. pic.twitter.com/ZMbQ13QnZp

A bit of history will be made at the 2020 U.S. Women's Open. Due to the rescheduling of the event into December, daylight will be precious and the first two rounds will employ both 18s. Following the cut, Cypress Creek will host the two weekend rounds. Lewis mentioned she's played Jackrabbit more than Cypress Creek lately (in part because it's easier to get a tee time) and it plays tighter off the tee.

Cypress Creek has hosted a variety of big events since its early years. It hosted the 1967 Ryder Cup, which saw the largest U.S. blowout (23.5 to 8.5) in the event's history. The American captain that year: Ben Hogan. The USGA brought the U.S. Open there in 1969, the last time a men's major was staged in Texas. For the PGA Tour's Tour Championship, Champions alternated years with Atlanta's East Lake Golf Club in the late-1990s and early 2000s before the event moved exclusively to Bobby Jones' haunt. Winners of the event at Champions include two additional Masters winners, Mike Weir and Tiger Woods.

With a purse of $5.5 million, the U.S. Women's Open is the largest in women's golf history. The winner will receive not only a nice chunk of change but a victory on an iconic stage. No area club, even the oldest ones like River Oaks or Houston Country Club, can claim such distinction, and it's one that will grow even further at Champions when the Mickey Wright Champions Medal and Champion's trophy is awarded at the historic 2020 U.S. Women's Open.

The 2020 U.S. Women's Open can be viewed live across NBC, Golf Channel and streaming on Peacock.

Golf Central Pregame can also be viewed on Golf Channel prior to each round' telecast. View full schedule.

Total Obsession: Houston has a little of everything (Part 1) 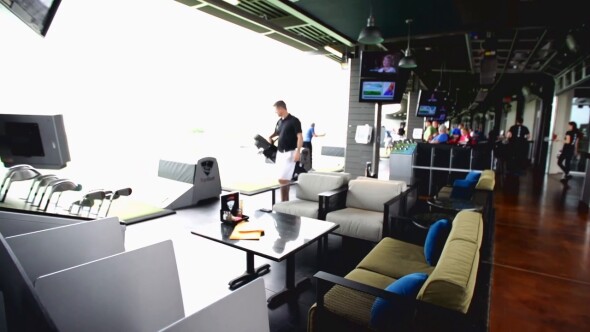 It was in 1971, Ben Hogan Played in his last PGA Tour Golf Tournament, on the Cypress Creek Layout.