The latest golf wearable from Garmin aims for high-performance GPS and shot tracking in a sleeker body.

GPS company Garmin has revealed a trio of new golf devices in 2021, and among them is the new Approach S42. Garmin's GPS golf watches can run independent of a phone during the round but in order to see your scorecards and stats, as well as syncing alerts, you'll need to sync it at some point.

Retailing for $299, the S42 provides many of the golf features of the Approach S62 launched in 2019 but lacks some others, chiefly the activity and lifestyle features. (See my review of the original Approach S62 here)

I have been wearing the original Approach S62 for the last couple years and have come to really enjoy it, not only on the golf course GPS and scoring but as an activity tracker I can sync to Strava. I've spent the last few weeks with the S42 instead of the S62. The S42 gives me the basic lifestyle info like vibrating Bluetooth alerts from my phone, step counter and alarm clock, but lacks the heart-rate and calorie-based widgets of the S62.

Over the years I've received a lot of comments on the S62. Many like it and some have even gone out and bought it, but some golfers who don't like playing with a watch remark to me there is no way they could wear something that big on their wrist. The approach S42 has a smaller and sleeker look, with a design aimed at being a more stylish daily watch, coming in three colors (black, gray and rose gold). The touchscreen is slightly smaller (1.2-inch touch display) but still color and packs a lot in. It only has one side button, not three, which also gives it a more streamlined appearance.

During the round, the S42 shows distances to the front-middle-back of the green, and you can also scroll up and down to get distances to each bunker or hazard that is marked. One other little nifty feature relatively new to Garmin is the ability to drag the pin location around to get a better idea of the distance to the stick.

One of several reasons why I prefer the golf-focused watches of Garmin like the S42 over Apple Watch is the instant, auto-shot measuring and tracking feature. It detects a shot and at the top of the watch, shows the distance you've traveled in real time. Not only is it cool to see how far you hit your drives, but if you hit a ball offline, you can get a good sense of when you should veer into the rough or woods to look harder for it. It's saved me strokes. I also really like the intuition of the scoring function. It detects when you're on the center of the green and loads the scorecard up so you just have to adjust and confirm strokes right there and move along. You can also enter putts and penalties on the watch face as well. When you finish the round, the scorecard will upload to the Garmin Golf app for you to see, and you can also view performance data based on however deep you want to go on shot tracking.

Yes, the S42 watch can also be set up for shot tracking. It will track the location of each shot and load it into the app. After your round, you can review shots and assign clubs to them. Or, you can add Garmin's CT10 club tags which will automatically assign clubs to each shot and save you some time. In regards to advanced analyticis, I think Garmin is lacking vs. golf-focused brands Arccos and ShotScope, but the data is pretty robust. If you have a CT10 sensor on your putter, the app is very good at telling you average distances for your irons. (I'll have more on the CT10s and club tags in a forthcoming article.)

Comparing Garmin's S42 with the S62

Without a heart-rate monitor, the S42 lacks the serious fitness tracking component of the S62. But it also lacks a few of the golf features, like the Virtual Caddie and also "Pinseeker" (this feature that points you in the direction of the green rarely comes in handy, but it's crucial when needed in a blind spot). The biggest difference during the round, however, would have to be the flyover maps. The S62's is more realistic and shows a flyover rendering of the hole, while the S42 just shows a straight line and you can toggle between bunker and water hazard distances.


Garmin is a definite leader when it comes to GPS of just about anything on our planet, and that includes golf wearables. The Garmin S42 is certainly a premium golf watch that has fast and intuitive functionality. The ability to drag the pin, a new feature since I reviewed the original S62, is a nice perk, albeit you're still guessing a little bit as to where the flag truly is (although for diagonal or complicated green shapes it helps). I'm going to stick with my S62 over the S42 for a couple reasons, chiefly the overhead maps, slightly larger screen and enhanced activity tracking. The Approach S42 wins for its lower cost and sleeker design and if you only want the lifestyle basics like step counting and bluetooth alerts, the S42 is all you need, but ideally it would come with some of the additional features of the S62 like the detailed overhead maps with drag-able landing zones and virtual caddie. 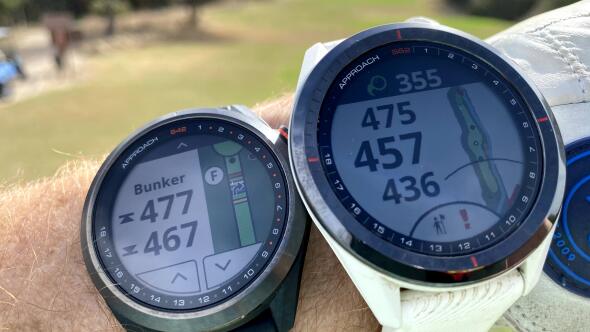