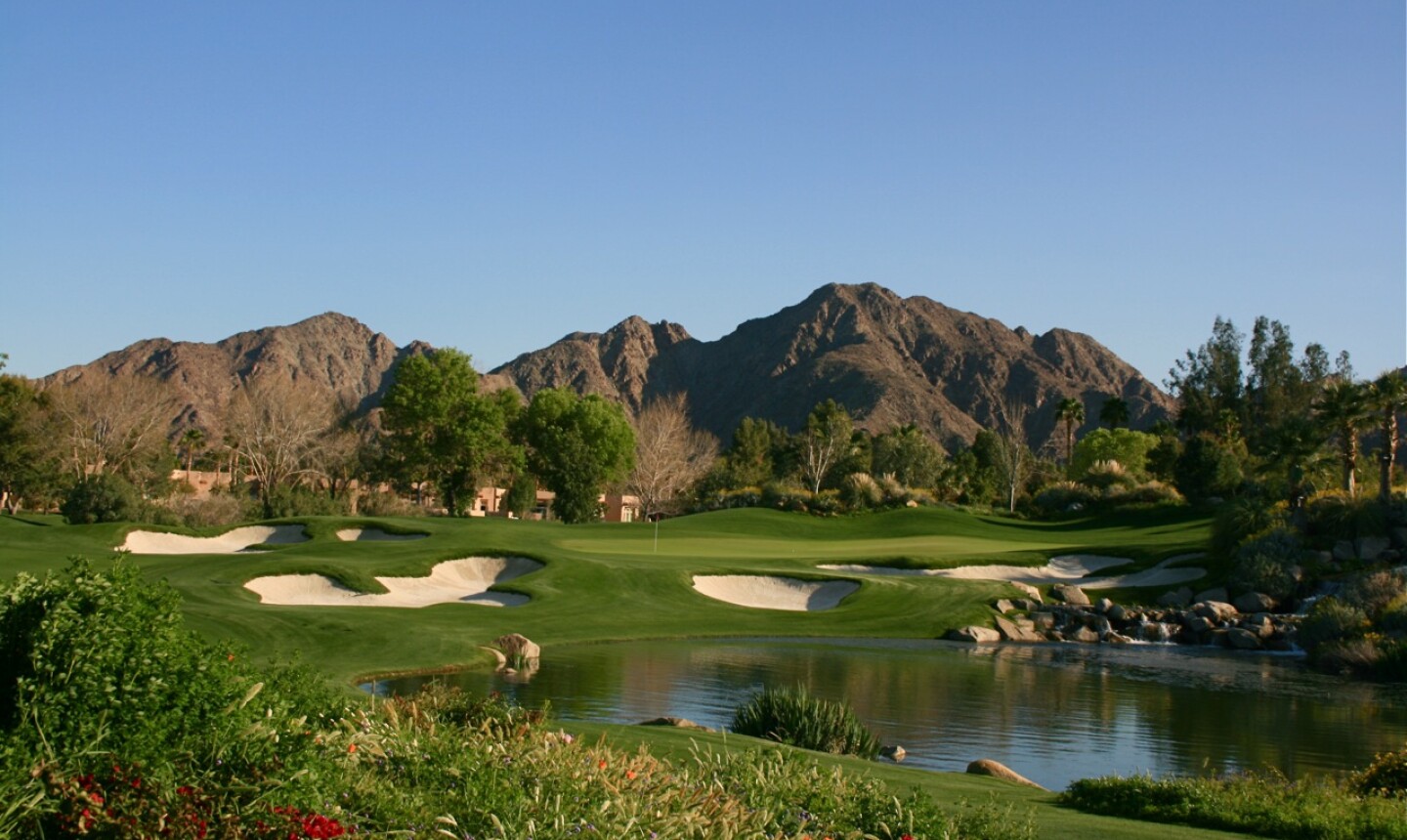 The Celebrity Course at Indian Wells Golf Resort is one of two brand new, upscale resort courses built by the city of Indian Wells near Palm Springs. Brandon Tucker/Golf Advisor 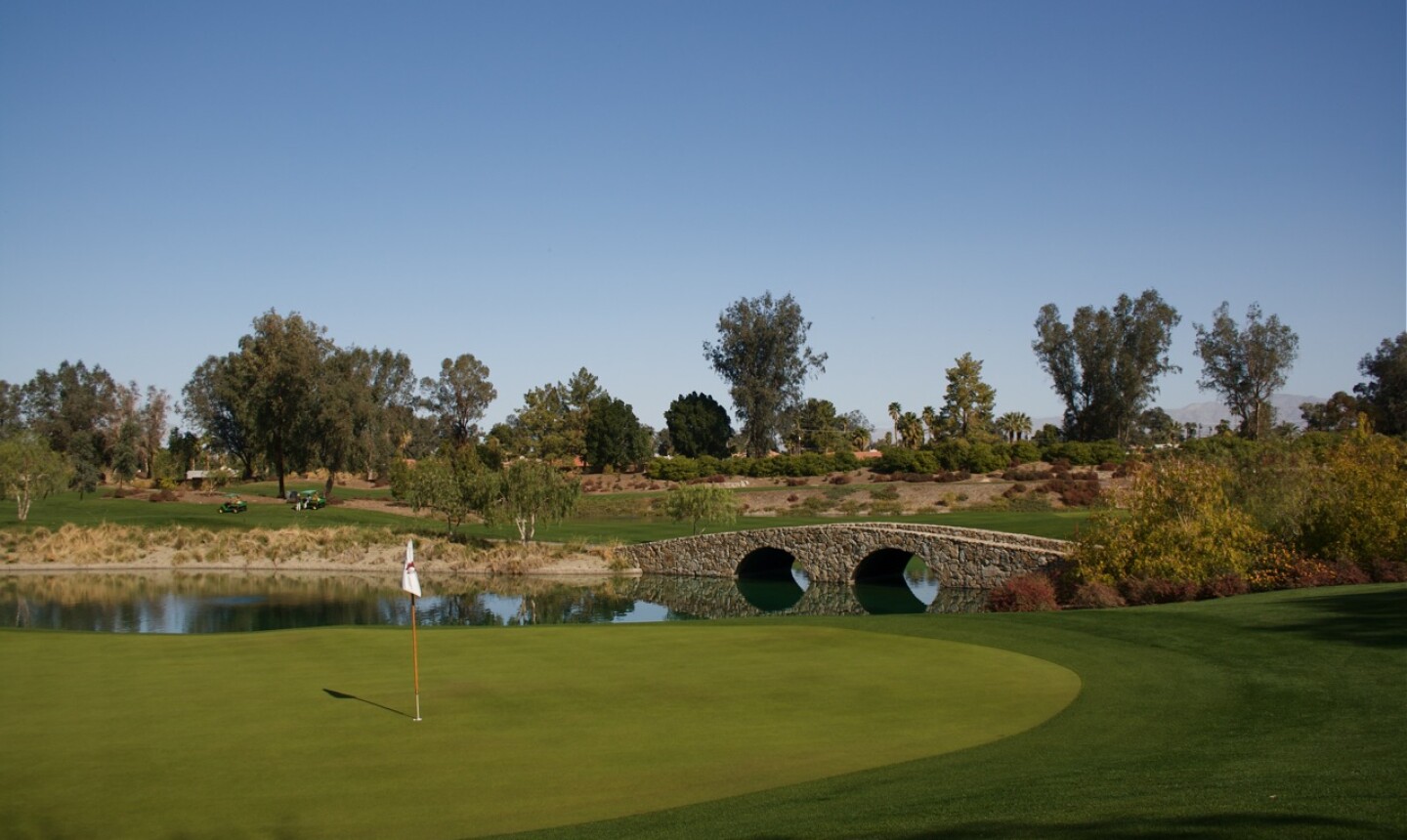 Unique to the Coachella Valley, the Players or Celebrity courses at Indian Wells Golf Resort have virtually no real estate on them. Brandon Tucker/Golf Advisor 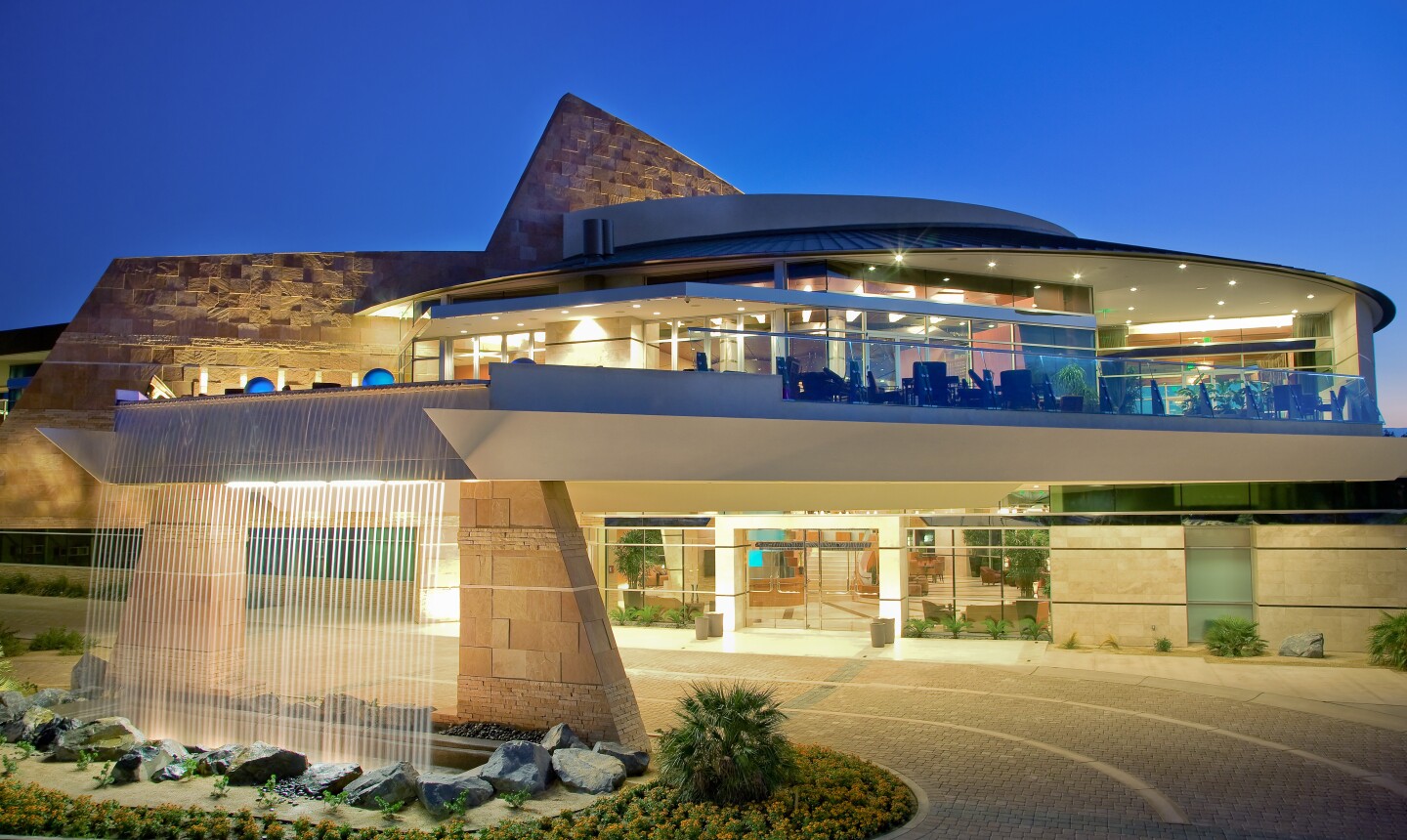 The new IW Club in Indian Wells opened in 2008 and is a focal point for the city. Courtesy of Indian Wells 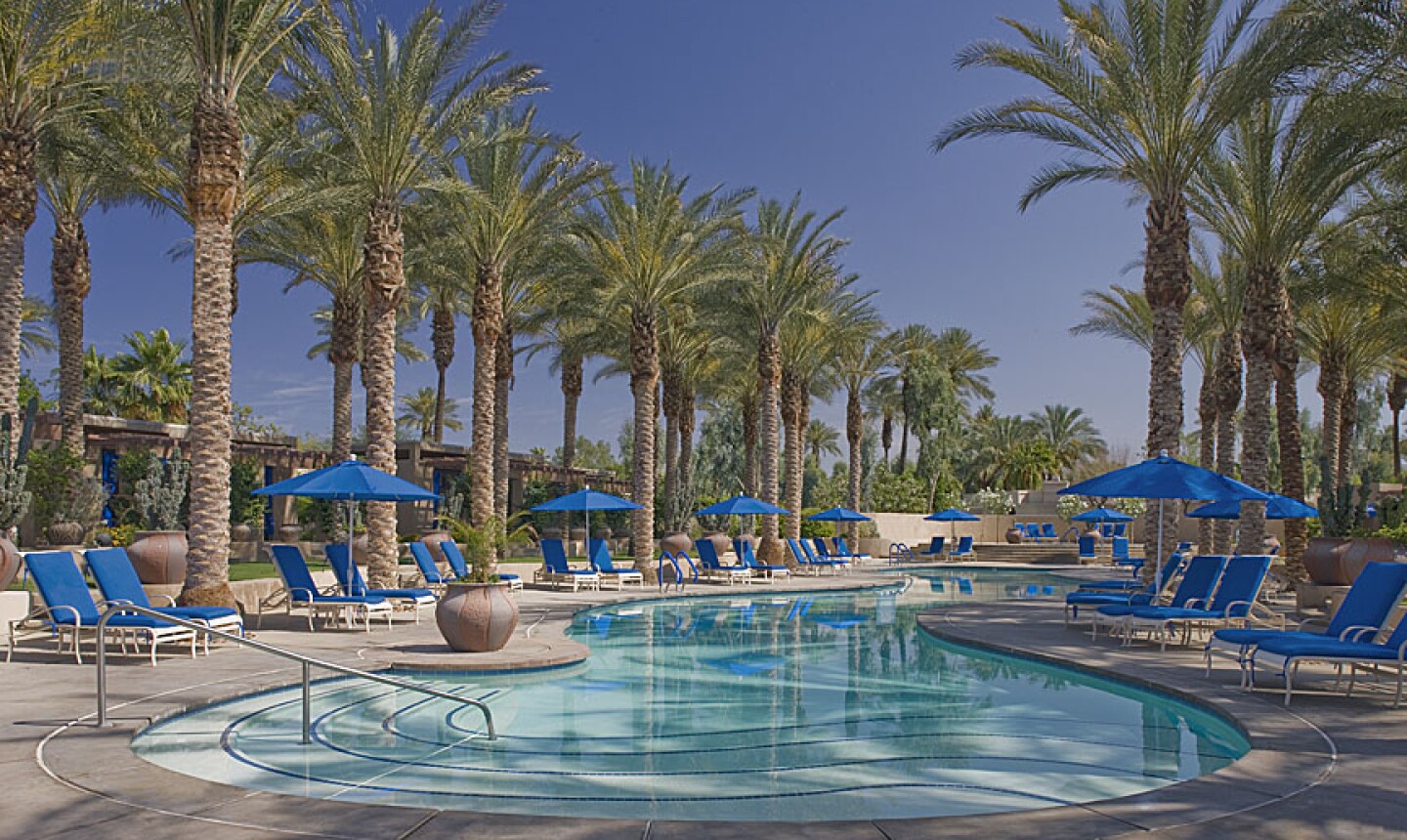 The Oasis Pool is one of seven pools at the Hyatt Grand Champions in Indian Wells next to the golf club. Courtesy of Hyatt

Indian Wells Golf Resort's new Players and Celebrity courses are not your ordinary municipal golf courses, they're top-shelf resort courses managed by Troon Golf but offer luxury for a discount in Palm Springs.

But your muni probably isn't in the Coachella Valley city of Indian Wells, where golf is a big reason why the area has thrived in the first place. At the heart of it all are two municipal golf courses that fit right in among the area's top resort courses: Indian Wells Golf Resort's Players Course and Indian Wells' Celebrity Course.

The city has had muni golf since 1986, but they're nothing compared to what you can experience now. In 2006, the decision was made to overhaul the original East and West courses and make them worthy of tourist play.

In former Mayor of Indian Wells' Mary Roche's words at the time of the project's inception, the goal was to produce "two golf courses that can capture the attention of the most astute golfer."

That included not only two brand new golf courses but the construction of a bold, new 53,000-square-foot clubhouse that would serve as a prime meeting spot for the community. It's especially a top spot to watch the action during the Indian Wells BNP Paribas Tennis Tournament each spring, an even bigger deal in the valley than the Bob Hope Classic.

To make the transformation, the West Course was closed so that Clive Clark could come in and rebuild it into the Celebrity Course, which opened in the fall of 2006. The closure of the East Course soon followed and was transformed into the Players Course, designed by John Fought and opened the following fall.

Aside from some trees and the fact no housing intrudes on either course, the two are wildly different and no expense was spared in beautification. Waterfalls, ponds, lush plant life and plenty of palm trees make each course a feast for the eyes.

"Signature hole" finalists abound here. The strength in the Celebrity come in its par 5s, first on the fourth hole that heads downhill and requires a deft shot over a pond to small green. No. 14 upstages it, though, as it opens up into desert and plays straight towards the mountains as a backdrop.

Though the most dramatically scenic holes come on the Celebrity, that isn't to say the Players Course in an eyesore with such dramatic green sites as the 17th hole affording great vantage points of the surrounding mountains.

Own property in Indian Wells, and 18 holes will cost you just $35, while the peak-season rack rate is $139, well below what you'd expect an upscale desert course to cost during the peak season.

"I just e-mailed my buddies," said Alex Santos, sitting in his cart with his PDA on the back nine of the Players Course, tagging along for the week while his wife attends a conference. "I told them Arizona's out, next golf trip we're coming to Palm Springs."

Golfweek's 2009 Best Municipal Rankings put the Celebrity Course at No. 6 in the nation and the Players at No. 7 but were also given a "Best Resort Courses of Distinction" ranking in the recently released 2010 and also included in the Top 25 golf courses in California You Can Play.

The LG Skins Game was hosted on the Celebrity Course in 2007 and 2008, but the Players feels like an equal, if not greater, challenge with more length and a more traditional course design compared to a slightly showier Celebrity Course.

The Players plays 7,376 yards from the championship "Cabernet" tees, a full 300 yards longer than the Celebrity, though the Celebrity's narrowness and more uphill approach shots help even it out. Also unique to the Celebrity, the back nine has just one par 5 and par 3.

You can't go wrong with either the Celebrity or Player course, both managed by Troon Golf and in top condition and service; so if you only have time to play one, don't fear you're getting the short end of the stick.

The IW Club has both a casual lounge and upstairs dining room, as well as golf shop and full locker rooms. It's as fine as a 19th hole as there is, so stay for a drink, especially if you manage to catch the happy hour with specials on appetizers and drinks.

One of four AAA Four Diamond Resorts in Indian Wells is the Hyatt Grand Champions, a worthy option for golf travelers that offers stay-and-play packages with the Players and Celebrity within walking distance of the IW Club.

Amongst the resort's 45 acres is a spa, seven pools and numerous dining and lodging options. The guest rooms in the main hotel have their own living areas, a step below the bed, where you can access your own private balconies, as well as spacious bathrooms. If that's not enough room for comfort, rent out a one- or two-bedroom villa, complete with private pools and butler service. 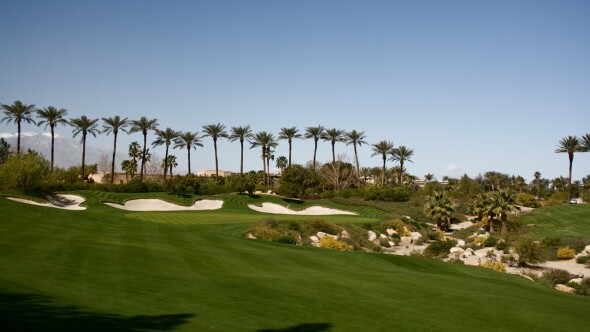 Galleries
Photo gallery: Players Course at Indian Wells Golf Resort near Palm Springs offers a brawny challenge
The Players Course at Indian Wells was designed by John Fought and plays a brawny 7,376 yards from the back tees. Its terrain isn't as dramatic as the resort's Celebrity course, but it features beautification in every spot and there is no residential development lining any fairways. Both Indian Wells courses are rated among some of the best public and municipal courses in both California and the country.
12 Images