Foster, 60, was found to have smuggled up to $500,000 in merchandise derived from endangered species.

As professions go, “golf course architect” has historically been about as squeaky-clean as any.

That changed on Wednesday. Per the Fauquier Times, architect Keith Foster, 60, pled guilty to smuggling upwards of $500,000 worth of items derived from endangered species, including birds and other protected wildlife. Foster could face up to five years in federal prison for his crimes.

The Fosters opened the Outpost in Middleburg in the fall of 2012. They had two other shops in Upperville, the Keep and the Cottage, also now both closed.

The plea is the culmination of a saga that began 13 months ago, when law enforcement officials for the U.S. Fish and Wildlife Service raided The Outpost, a Middleburg, Va. shop owned by Foster and his wife, Pam.

Foster’s illegal activities came to the attention of the U.S. Fish and Wildlife Service back in 2016, when an undercover agent posed as a client of Foster’s. Foster offered to import contraband sawfish blades for the officer.

“Rest assured,” Foster allegedly told the agent, “I’m gonna bring more in ‘cause I’m the only fool in the States that probably wants to risk it.”

While risk and reward might be critical elements of sound golf course design, it seems Foster pressed his luck too many times.

Foster’s body of work is not as extensive or famous as that of peers like Tom Doak, Gil Hanse or Coore & Crenshaw, but over the last 20 years or so, he has built a solid portfolio of work, both in original designs and renovation/restoration work.

Foster has worked on two regular PGA Tour stops: the Old White TPC at The Greenbrier and Colonial Country Club. His website also mentions that he has worked on 2001 U.S. Open and 2007 PGA Championship host Southern Hills Country Club in Oklahoma, and 1898 U.S. Open host Baltimore Country Club. More recently, the club hosted the Senior Players Championship from 2007 to 2009. So did the Wissahickon Course at Philadelphia Cricket Club (2016), another A.W. Tillinghast design Foster restored.

Foster had also recently agreed to perform renovation and restoration work at two other past U.S. Open venues: Congressional Country Club in Bethesda, Md. and Olympia Fields Country Club in suburban Chicago. He was also in the midst of redesigning The Harvester Club, an original design of his in Iowa.

Foster not only golf course architect to face jail time

Back in 2003, Florida-based architect Ted McAnlis was sentenced to 10 years in prison for tax evasion to the tune of more than $1.3 million over a quarter-century. Among McAnlis' design credits: redesign work at the Blue Monster at what is now Trump National Doral. 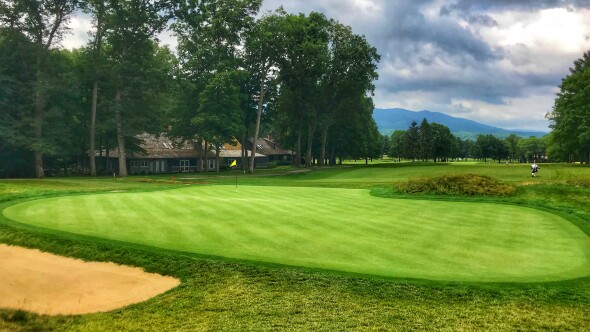 Take a look at Keith Foster's golf course design and renovation credits
While not as big a name as Doak, Hanse and Coore & Crenshaw, Keith Foster built a solid portfolio, both of original designs and notable renovations and restorations.
Golf Advisor NewsArchitecture

Wow, never would have thought this of Keith.

Kira K. Dixon
Lifestyle Correspondent
Now Reading
Keith Foster, prominent golf course architect for PGA Tour and major championship venues, facing federal prison sentence
New Cookie Policy
WE AND OUR PARTNERS USE COOKIES ON THIS SITE TO IMPROVE OUR SERVICE, PERFORM ANALYTICS, PERSONALIZE ADVERTISING, MEASURE ADVERTISING PERFORMANCE, AND REMEMBER WEBSITE PREFERENCES. BY USING THE SITE, YOU CONSENT TO THESE COOKIES. FOR MORE INFORMATION ON COOKIES INCLUDING HOW TO MANAGE YOUR CONSENT VISIT OUR COOKIE POLICY.
CONTINUE
Search Near Me