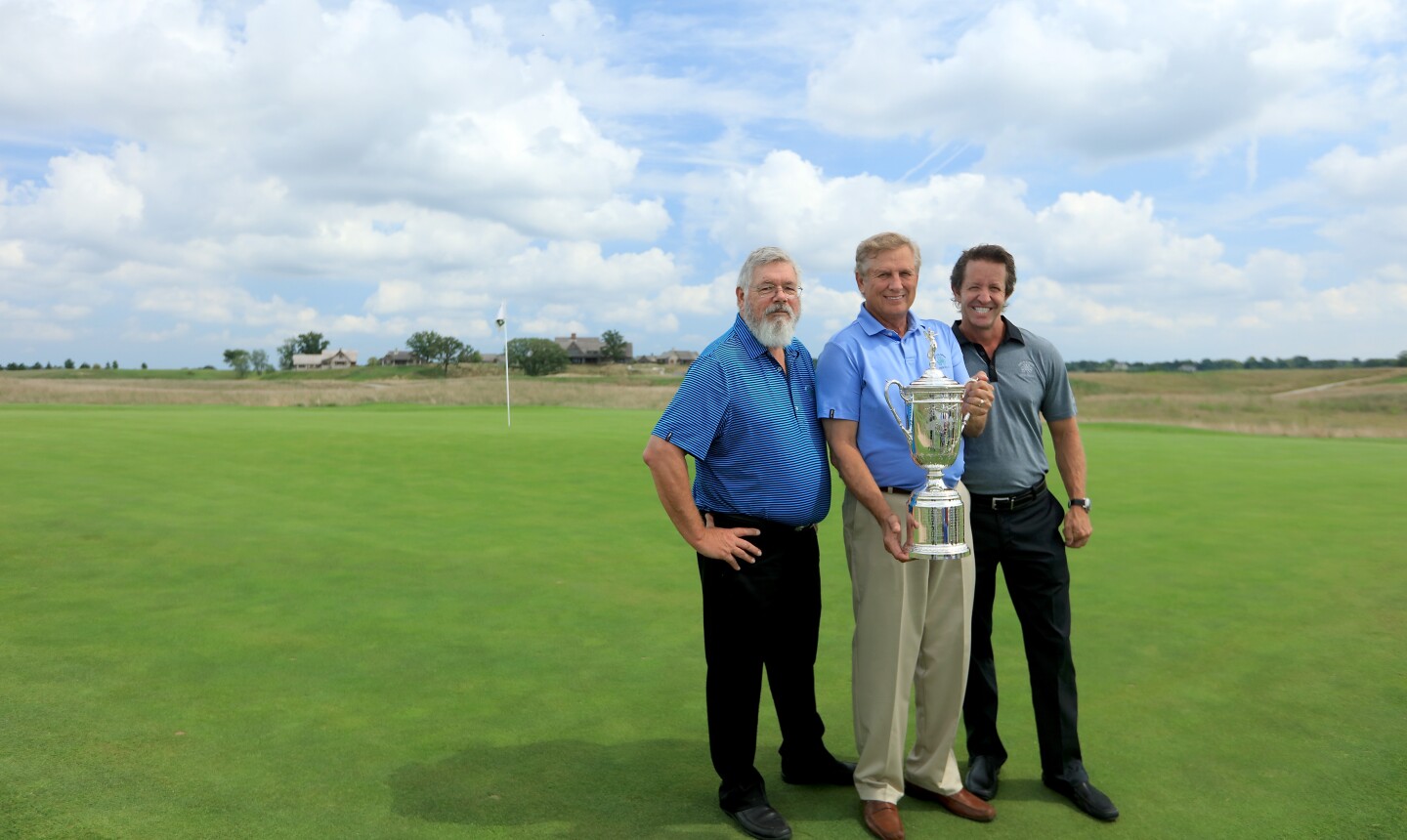 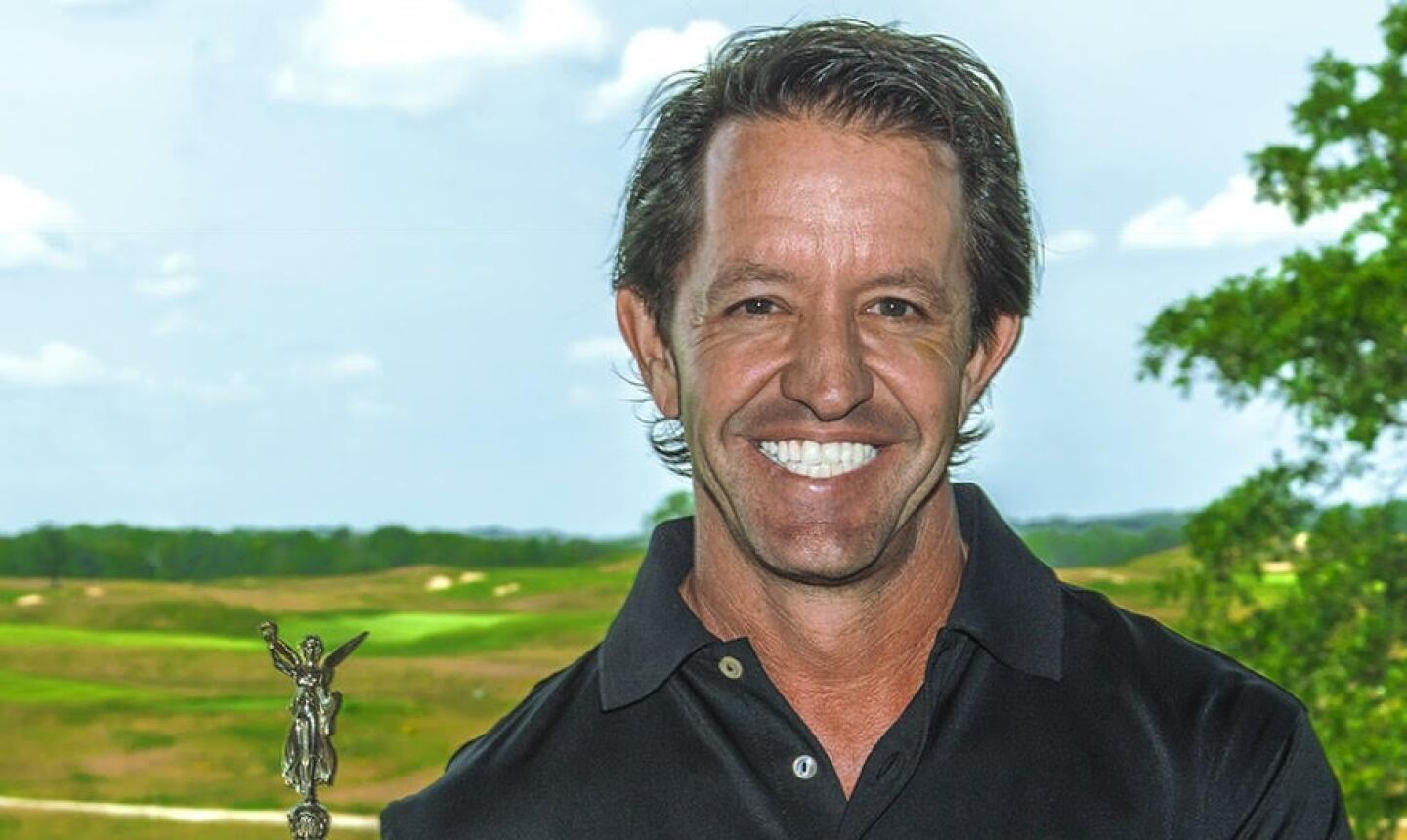 Dana Fry is one of three men credited with designing Erin Hills, host of the 2017 U.S. Open. Courtesy of Dana Fry

When the 2017 U.S. Open visits the Erin Hills Golf Course in Wisconsin this June, golf's newest major venue will showcase the work of a unique trio of architects - one-time partners Dana Fry and Dr. Michael Hurdzan, along with Ron Whitten, the golf architecture editor at Golf Digest.

It will be the first U.S. Open ever held in Wisconsin and the first major championship course designed by any of the men.

Fry left Hurdzan in 2012 to form a new firm, Fry/Straka Global Golf Course Design, with Jason Straka. For a while, Fry lived in Asia, hoping to capitalize on the building spree that boomed and then busted.

Fry, 55, is back in the United States, living the next chapter of his life in Naples, Fla. He calls himself the "Gary Player of golf architects." He has dedicated his life to fitness - losing a fair bit of weight - and is enjoying the success that comes from landing a major. He and Straka recently landed a coveted job to design a second course at Arcadia Bluffs in Michigan.

Golf Advisor caught up with him by phone this spring to get his thoughts on the upcoming U.S. Open at Erin Hills, only the sixth public course to host America's national championship.

Jason Scott Deegan: Not many living architects get to see their courses host a major championship for the first time. What does it mean to have your course host the U.S. Open?

Dana Fry: I think the last person to do it (before Chambers Bay with Robert Trent Jones II in 2015) was Bobby’s father (Robert Trent Jones Sr.) in 1970 at Hazeltine National and in 1965 at Bellerive Country Club. Pete (Dye) and Jack (Nicklaus) have done it (with the PGA Championship). It doesn't happen very often.

JSD: What about Tom Fazio? Quail Hollow Country Club is another new course getting a major this year.

DF: I started in the business in 1983. I worked for Fazio right out of college. I look at all the work Tom’s done and it’s unbelievable. Without Tom, I’m not sitting here today. I met his right-hand man, Andy Banfield, in 1983. I was going to school at Arizona. I met Andy. He said come on out, and he offered me a part time job. It's unbelievable we are both getting a major in the same year. It is very ironic. It is a hard thing for me personally to grasp, especially the U.S. Open. It is our national championship. It's an overwhelming thing. I still can’t believe it.

JSD: You're sharing design credits at Erin Hills with Dr. Michael Hurdzan and Ron Whitten. There were some issues with that at Chambers Bay between Robert Trent Jones Jr. and Jay Blasi. What will it be like for you and your former partner?

DF: Mike Hurdzan and I were in the final three (architects in the running to design Chambers Bay). It's interesting how that almost happened. I worked with Dr. Hurdzan from 1988 until July 2012. I can say this, other than my father and son, he is the most important male figure in my life. Saying I love him would be an understatement. There is none of that (animosity) between Mike and I. You will not see any of that stuff this year. There is enough credit and enough blame if something happens. I couldn’t be happier. Mike has been doing it (designing courses) much longer than I have. He's been doing it 20 years longer. Before I came to work with Mike, he did mostly low-budget projects. For him to rise where he did, it is a Cinderella story.

JSD: When did you believe a U.S. Open at Erin Hills was actually a reality?

DF: You hear people who have those types of dreams. Rarely do you think it will happen. Before construction started, Mike (Davis) and David Fay (the current and former Executive Directors of the United States Golf Association) came to the property. When they walked around, to hear the words they would use and how much they loved the piece of land, it was an awesome piece of property on a grandiose scale. It was something they have never had.

David Fay, he thought it was one of the most awesome venue sites he had ever seen. It is a larger-than-life setting. You have these golf holes that fit in. Did I think it would happen? As the years would go by, they kept coming out. They believed in it. They had a lot of pull and power. You started to believe. Several years before they announced it, I believed it would happen. I would tell people in the golf industry. People would look at you like you are crazy. When it got the (U.S.) Amateur, that got more people believing.

JSD: What will the pros think of the course?

DF: I think the pros are going to like it a lot. It is a fair test. It is demanding, beautiful visually to look at. The only thing you might hear (about complaints) is it is a long walk, around eight miles. As a course, the quality of shots is fantastic. Picking lines is demanding. The only other thing they might not like is some of the bunkering. You might have to hit sideways or backward. That could happen and will.

JSD: What kind of impact did getting the Open mean to your design career?

DF: I’ve lived in Asia and Hong Kong. I always struggled (getting jobs). In other parts in the world, I was not known. You aren’t Jack Nicklaus. I wasn’t famous. For every one job I would get, I would lose 15 or 20. When you get the Open, it is 100 percent fact it gets your foot in the door in so many places. Instant credibility. I’ve got work in China, Thailand and Vietnam and America. I will announce some other projects soon, maybe during that week (of the U.S. Open).

JSD: What are your plans for enjoying the tournament?

DF: I will go out there for two weeks. I will go the week before the Open and afterward, I will do what everybody who plays golf dreams of: I will be playing the same course as the pros from the same tees the day after the tournament. I am a four or five handicap. I'll see if I can break 90 or maybe 100.

JSD: What's most important to you: Getting good feedback from the pros about the course, getting a winning score around par that the USGA wants or Erin Hills landing a second U.S. Open?

DF: Everything you said there is part of it. The relationship to par is important to me. These will be the best bentgrass greens they will ever putt in an Open. They will be 99.99 percent bent with no poa. The greens will roll perfect. If it is wetter and they can fly the ball to the hole and stop it - if you get DJ (Dustin Johnson) or Rory (McIlroy) who bomb it - and it is not windy, they could shoot some low courses. If it is dry and windy, it could be relentless. The weather will dictate the scoring. You really hope you have a bunch of marquee players right at the top. I want them to hopefully like it. If the comments came across like they did at Chambers Bay, it will be difficult to take. I'll be honest. It is a major part of your heart and soul (designing a course). With all the changes (since the course opened), no expense has been spared. There are no weak holes. They all fit in well. There is a good mix of short and long. It's got a lot going on. I am expecting very positive comments. I am realizing that they are tour pros and always have something to say.

If the criticism is on the bunkers, that will not bother me at all. They are hazards. That has been lost. If you get a good lie, to those guys, it is not a hazard. These are hazards. Those are the only things I think they will say negative. If they felt a golf hole was not good and the quality of shots was bad, that would be tough to take, but I don’t expect that. I think it will be favorable. I have a lot vested in it. With how the Wisconsin people show out for golf, they will get tremendous support among the fans. I expect there is a great chance that it will come back. I certainly hope so.