Making a winning change is a Cool Golf Thing

It was the final hole of a local tournament. Standing in the fairway, 118 yards from a front-left pin tucked behind a bunker, I knew I had a chance to win. One of my playing partners and I were tied, and I was first to play. I was nervous, but I was also more confident than I would normally be because I'd made an unusual decision a couple holes earlier: I was going to smile.

It's hard to act-as-if on the golf course because the inevitable parade of shots that don't go according to plan are like the jabs that prize fighters use to wear down their opponents. After taking the punishment that every round inflicts, it's hard to be anything other than authentically annoyed. But in the middle of the back nine, it dawned on me that I should be happy, because a) I had voluntarily signed up to play this competitive round of golf, and b) I was in position to win. This was what I wanted, wasn't it?

Of course it was. Armed with a 52-degree wedge and a dopey grin, I hit my approach to four feet. I holed the putt and won by a shot. All I'd done was simply lift the corners of my mouth, but it had given me an unfamiliar calmness. I'd yielded to the tension of the moment, rather than trying to ignore it as usual. Lo and behold, much of that tension subsided, to my ultimate benefit (and $100 in shop credit). "I never learned from my wins; only my losses" is a well-worn sports cliche, but I don't agree. I learned in victory this time around because it was something different from the usual futility. Try taking that with you to your next round and report back to me. 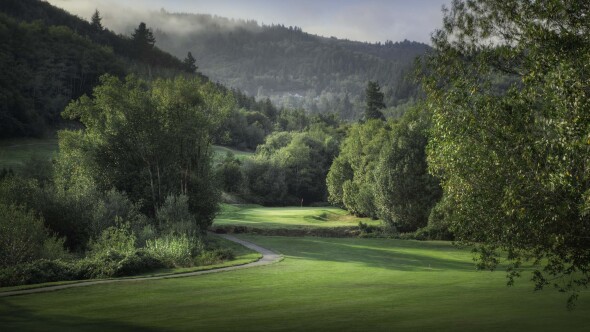