Trip Dispatch: Is New Mexico the most underrated golf state in America?

ESPANOLA, N.M. — I get asked the same two questions when golfers learn that I review golf courses for a living.

It's the second question after 'What's your favorite course?' that I most enjoy answering:

What's the one place I should play golf that nobody's heard of?

Ah, golf's holy grail: the hidden gem. Instead of giving them a single course to chase down, I share something better: an entire city filled with them. Albuquerque, New Mexico, has been my answer ever since I first visited more than a decade ago, playing a foursome of Paa-Ko Ridge, Sandia, Isleta and Twin Warriors.

A return trip to New Mexico this fall playing three other fantastic courses - Black Mesa, Taos Country Club and the University of New Mexico Championship Course - has only strengthened my belief in the mystical powers of this state, and specifically, a magnificent strip of desert and mountains stretching from Albuquerque to Santa Fe and including Taos.

Although GolfPass ranked Albuquerque-Santa Fe among the World Top 100 Destinations earlier this year, I still believe New Mexico is America's most under-appreciated golf state. You can play three U.S. Top 100-caliber courses in close proximity - Paako Ridge, Twin Warriors and Black Mesa - for pennies on the dollar compared to higher profile golf meccas. Plus, it's got all the extras beyond golf: casino resorts, a vibrant art scene, spicy food and that beautiful landscape.

The biggest hurdle for New Mexico is the notion that it's a more affordable version of Phoenix-Scottsdale. That's true when it comes to the look and feel of the desert landscape surrounding the courses but not when comparing the climates. New Mexico's much higher elevation leads to much colder winters with daily highs in the 40s and 50s. Albuquerque soars to 5,300 feet above sea level compared to 1,200 feet for Scottsdale. Black Mesa, for example, stays open year round, but the weather can be spotty from November through March. Spring (April-May) and fall (September-October) are the ideal times to visit, unless you like summers hot. June though August all average more than 90 degrees every day.

My October visit was just right with sunny days in the mid-70s. It was made extra special by the 49th Albuquerque International Balloon Fiesta. Just driving by while the world's largest hot air balloon festival launched into the sky was a visual spectacle I'll never forget. The same can be said for the golf experienced on the trip.

The evolution of Black Mesa, owned by the Santa Clara Pueblo, has been a winding road.

When Black Mesa opened in 2003, it was immediately christened No. 54 among the top public courses in America by Golf Digest, a heady debut for a course in the middle of nowhere, a half hour north of Santa Fe in tiny Espanola, with an unknown architect in Baxter Spann. After a decade of hosting bucket-list chasers, Black Mesa was struck by tragedy in 2014 when a vicious rainstorm and subsequent flooding wiped out important irrigation infrastructure. Water issues plagued the course for years until a new pump station finally created access to groundwater from the Rio Grande in 2018.

During this time, the course also eliminated more than 100 fairway bunkers, transforming them into grass hollows that are still difficult but not as intimidating as all that sand. "Getting the grass hollows has been great for pace of play," said Tom Verlarde, Black Mesa's first, and only, head pro. "Golfers drive into them and find their ball. It's maybe a half-shot penalty."

Conditions have returned to their glory days under Superintendent Aaron Sunderlin. What hasn't changed are those unspoiled views of the Sangre de Cristo Mountains. There's not a home in sight.

Consider yourself warned: The 7,307-yard Black Mesa is supremely difficult with a handful of blind shots and some wicked greens. Play from the whites (6,277 yards) to enjoy its endless challenges. The highlights are a superior collection of par 3s and two dynamite short par 4s. The course is open Wednesday through Sunday year round, costing $69-$89, a bargain compared to Paako Ridge, which has pumped up green fees to $225 under new owners.

In 2022, Black Mesa has plans to start offering golf packages and shuttle service from the tribe-owned Santa Claran Hotel & Casino, which is also scheduled for some upgrades. There's already several food options, including a Sports Book Bar with an expanded patio for dining, and the attached 24-lane Big Rock Bowling Center, in addition to the gaming floor.

An afternoon strolling Santa Fe's many art galleries and shops, followed by dinner at the Midtown Bistro, will add a touch of class to any golf trip. For a night out closer to the hotel than Santa Fe, try the La Cocina Restaurant.

Sadly, the pandemic has closed access to the nearby Puye Cliffs, a National Historic Landmark of ancient cliff dwellings I would have loved to see.

Taos is the gateway to ski country for many. Golfers who make the trek north will enjoy the mountain backdrop and good vibes of the 7,302-yard Taos Country Club in nearby Ranchos De Taos.

Also save some time to explore the Rio Grande Gorge Bridge 10 miles northwest of town. To some, staring down at the 600-foot plunge to the river is terrifying. I couldn't help but wonder how long it would take a golf ball to make a splash. That night, Martyrs Steakhouse served up a satisfying meal before the hour ride back to the hotel.

Back to school at UNM

The trip's final round took my game back to school for a lesson in humility. Nothing humbles single-digit-wannabee golfers like me more than a championship course in tournament shape.

Fall is tournament time at UNM's Championship Course. The rough and elevated greens are so overpowering that both the staff in the pro shop and starter at the first tee beg guests to tee it forward. My scorecard got punked by Architect Red Lawrence, but that's par for a course that has hosted four NCAA Division I men's championships (1950, 1976, 1992, 1998) and one women's (1987).

The 7,555-yard classic design overlooks the downtown skyline, riding hilly land adjacent to the airport. It's the perfect place to start or end a golf bender so many have yet to discover. 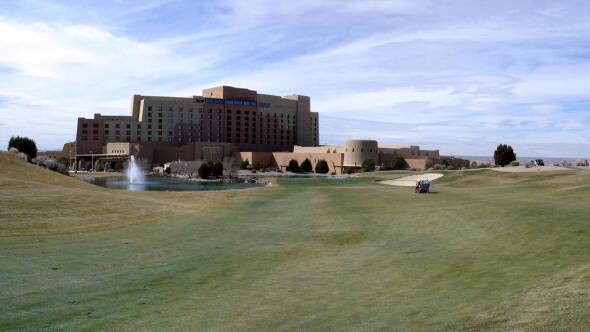 Since I live in NM, I'm very proud that our state is being recognized for the quality golf we have. However, you missed my favorite course. Although it is not that close to Albuquerque, you need to check out Pinon Hills in Farmington NM on your next trip. It is about a 3.5 hour drive to Farmington and Pinon Hills has humbled me every time I have played it. Another area with some great courses is the Ruidoso NM area. I live in southern NM and we play golf year round. Don't worry about the 100 degree temp in the summer. It is a dry heat.