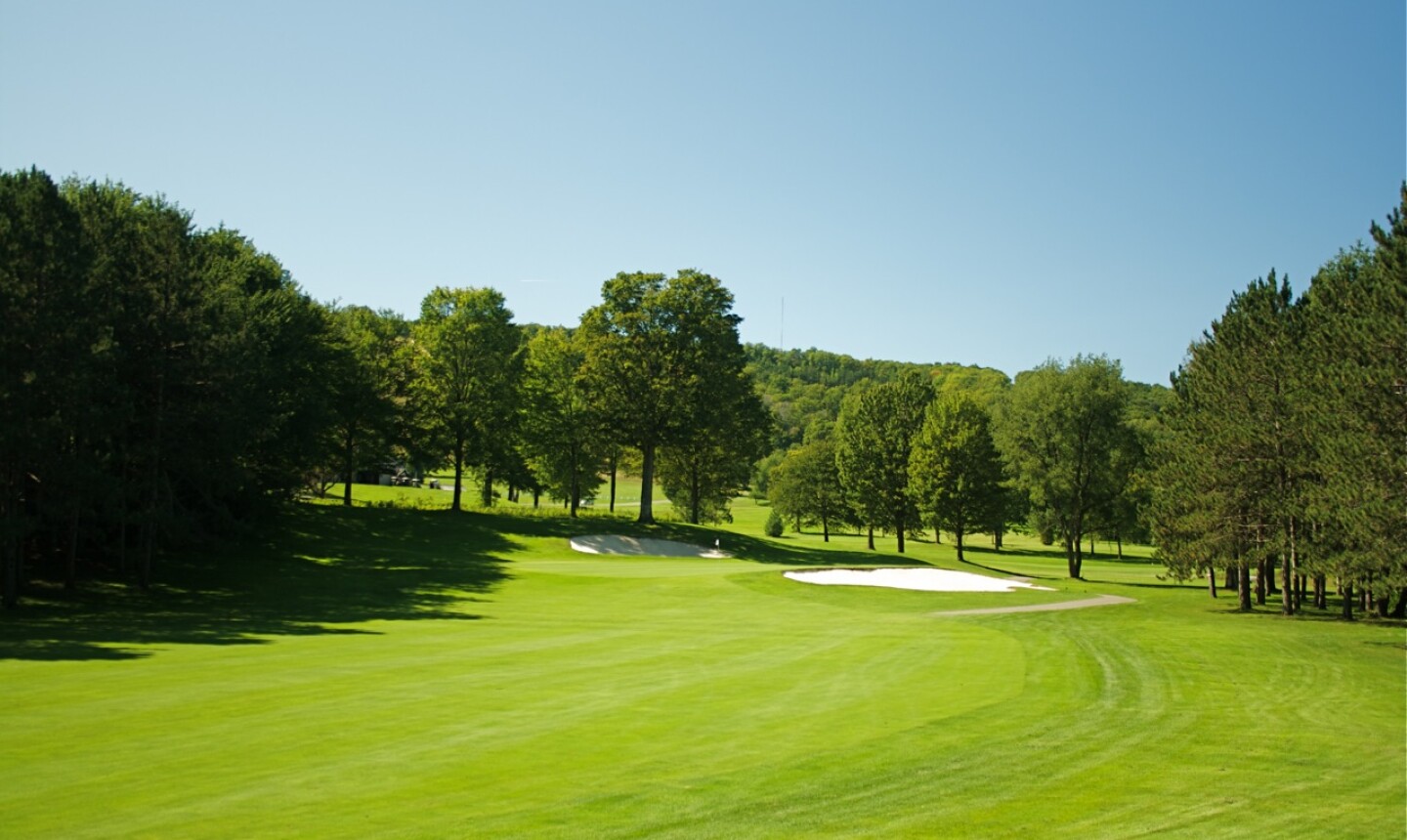 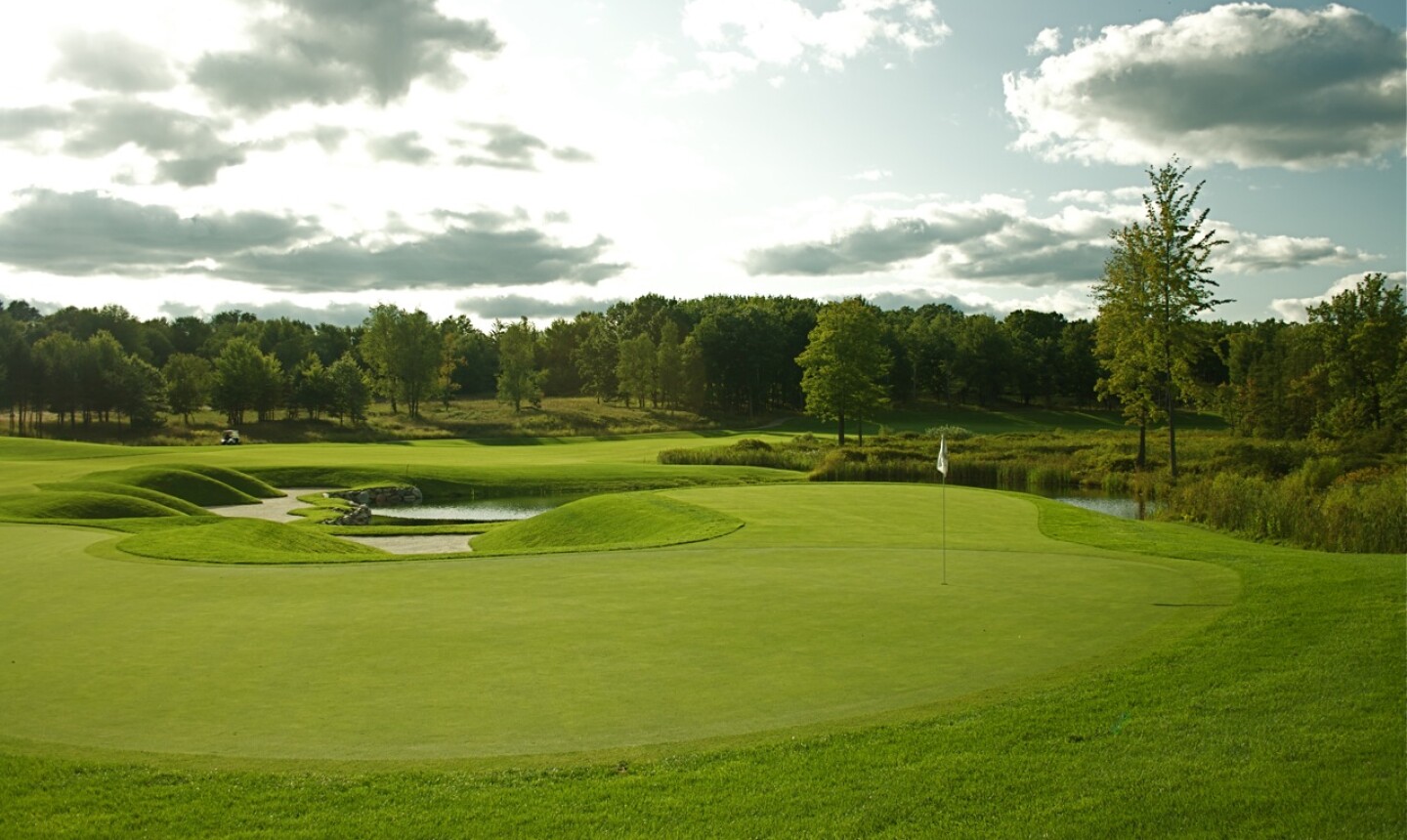 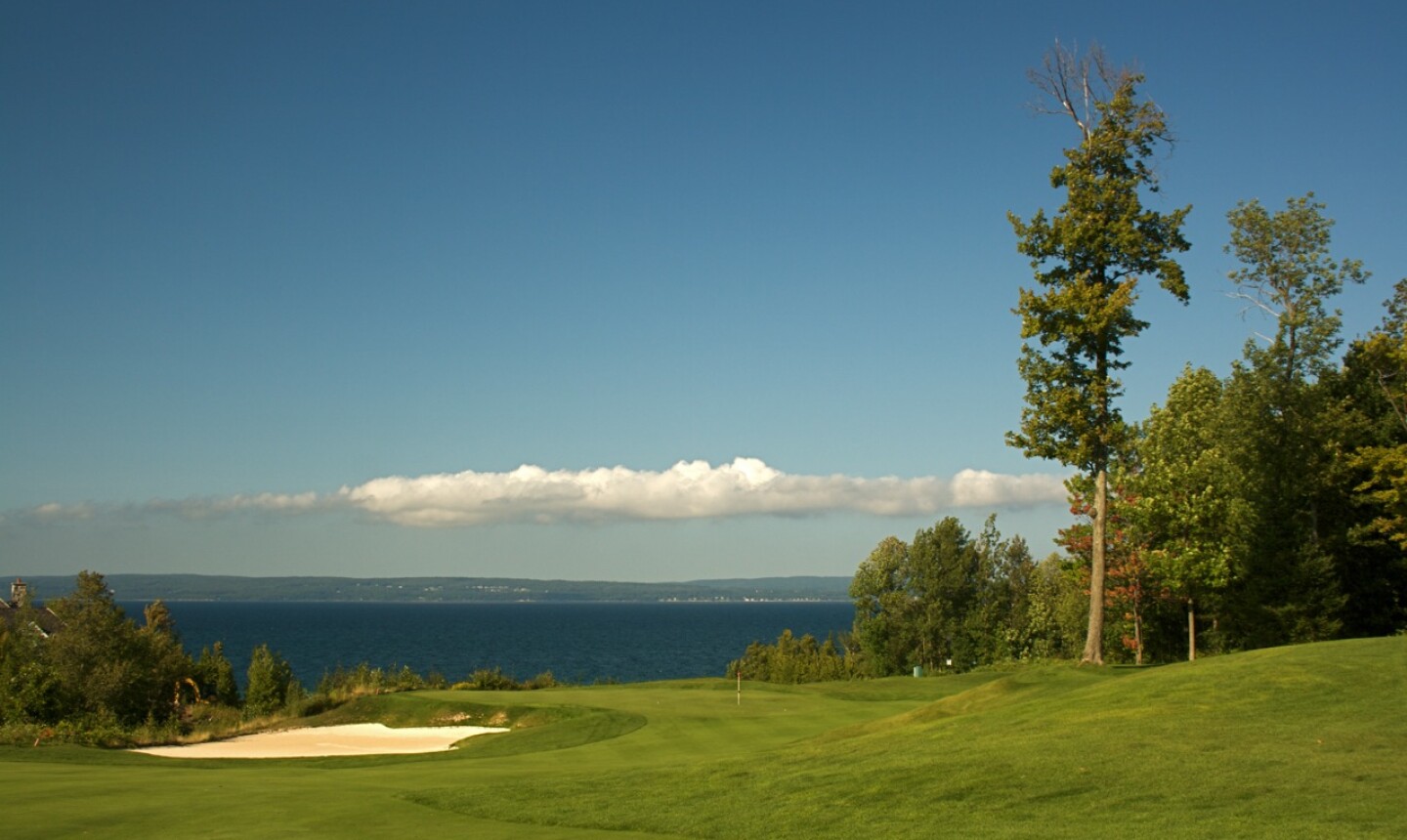 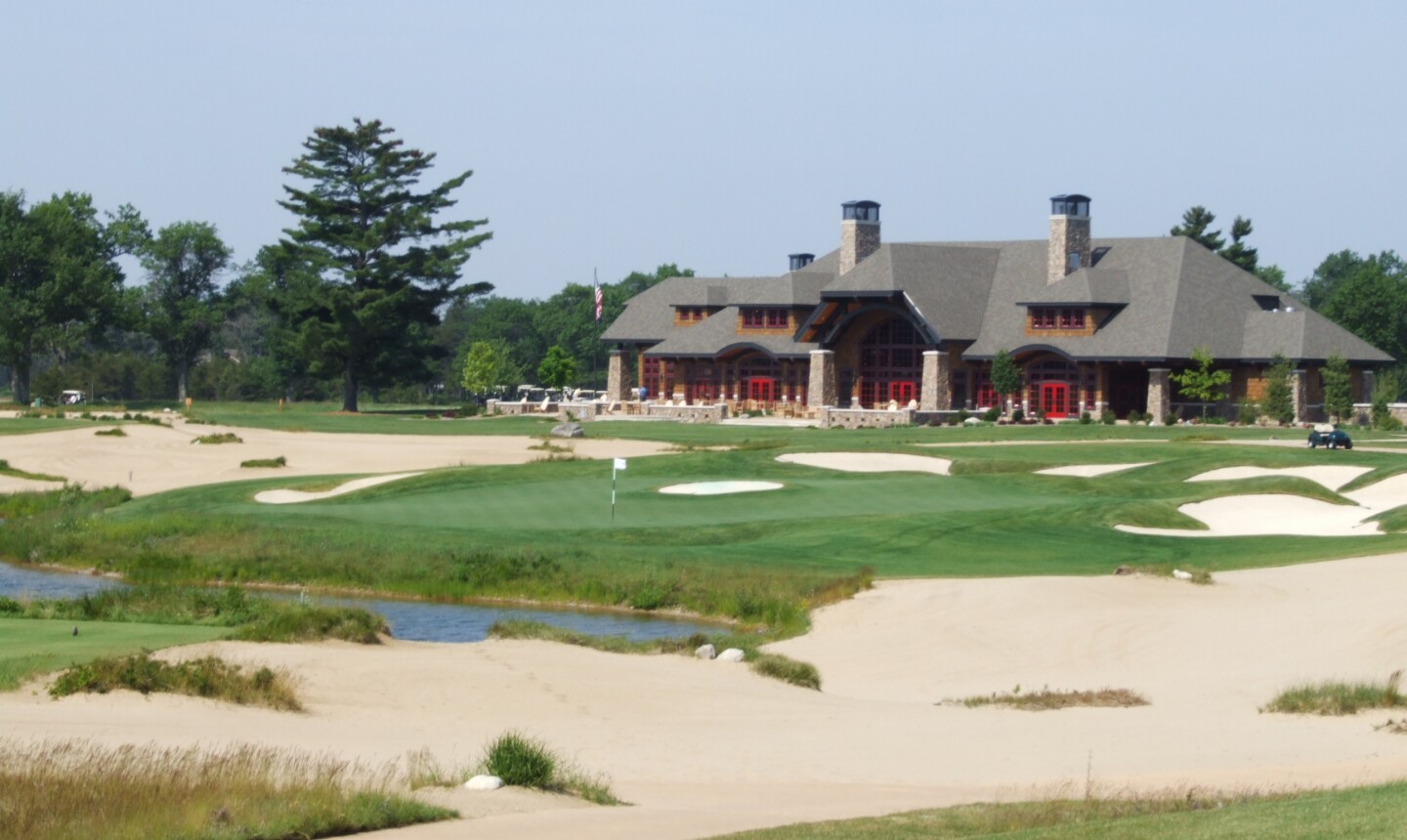 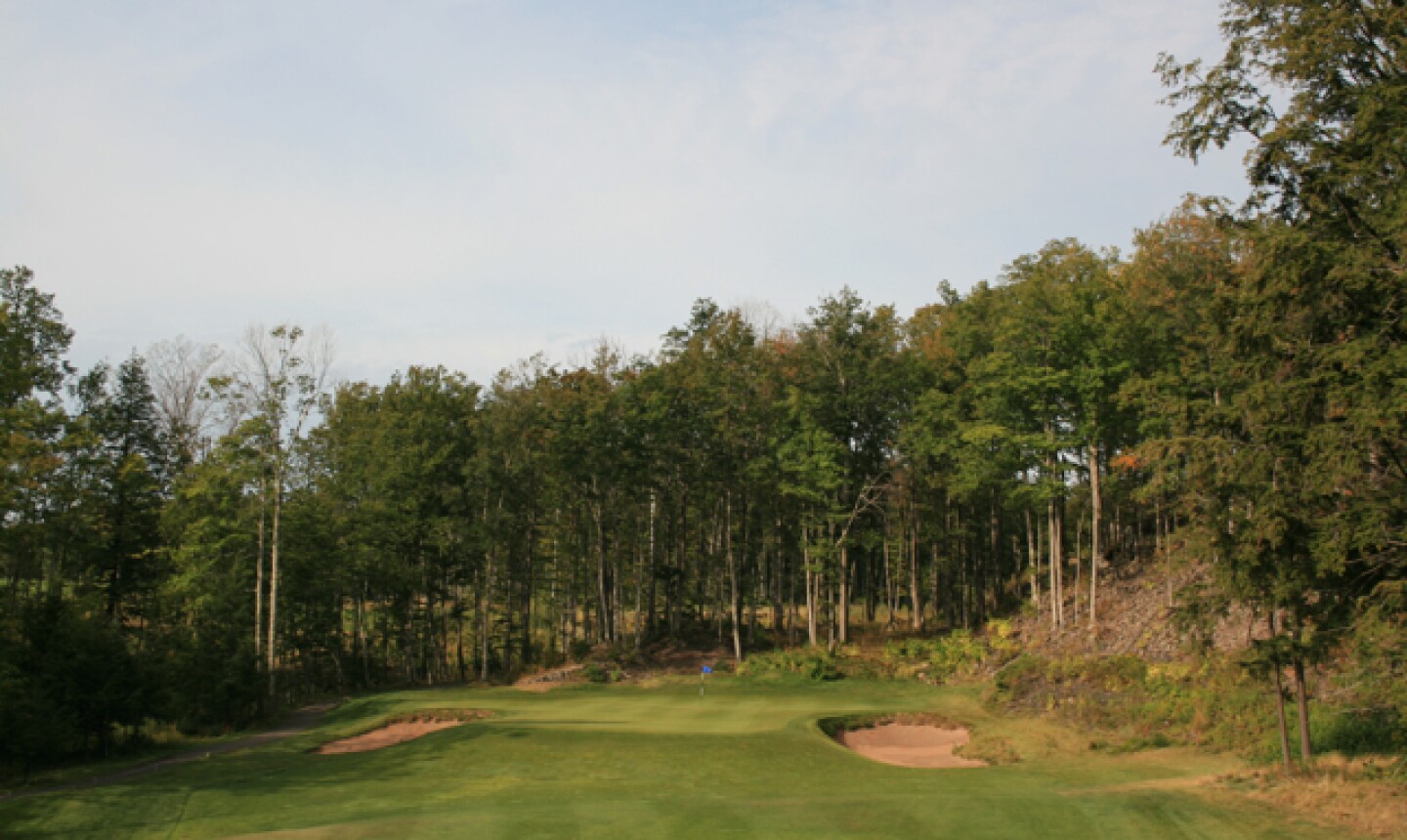 The eighth hole on Greywalls Golf Course, designed by Mike Devries, is a short par 4 guarded by bunkers on both sides of the green. Brandon Tucker/Golf Advisor

TRAVERSE CITY, Mich. -- For a good while, there were more golf courses in Michigan than any other state in the nation.

Northern Michigan, in fact, still includes as many notable plays as any destination in the world -- from Scottsdale to Myrtle Beach.

Many of golf's biggest names have unveiled designs here. Most of the action occurred in the 1990s, when golf-course construction was red hot in the area. The region provides a setting ideal for beautiful, dramatic golf designs, thanks to lots of cheap land, rolling terrain, dense forests and sometimes even hilly courses built adjacent to ski slopes.

Here's your blueprint to northern Michigan, categorized by golf-course architect. A couple noticeable missing giants in design are Pete Dye's firm, as well as Bill Coore and Ben Crenshaw.

We begin with Doak, because he actually lives in northern Michigan, though unfortunately, his first golf-course design, High Pointe Golf Club near Traverse City, recently closed.

You can play his other design, Black Forest at Wilderness Valley in Gaylord -- one of the area's toughest tests. It winds tightly through dense woods.

It's not hard to spot Nicklaus' northern Michigan effort: The Bear at Grand Traverse Resort. Built in the mid-'80s when Nicklaus was at his most sinister, it remains one of the state's toughest tests.

A name more recognizable in the mountain west, Engh built two Michigan golf courses, and they're both easy top picks. Tullymore Golf Club sits on 800 acres of heavily forested wetlands, and the hole variety ranks second to none. While "Tully" sits on gentle wetlands, True North Golf Club is your typical northern Michigan roller coaster, full of tumbling holes -- both uphill and down.

Robert Trent Jones Sr. built the first set of what developed into 81 holes at the Treetops Resort in Gaylord, the Masterpiece at Treetops. He gets credit for building the first of many elevated par-3 tee shots in the region on severe, hilly terrain formerly bypassed by designers. Jones Sr. also built a much more traditional design at Boyne Highlands Resort, the walker-friendly Heather Course, which even offers caddies.

More known perhaps for his desert designs, Weiskopf's two northern Michigan designs are knockouts. Forest Dunes Golf and Country Club ranks as a surefire top-five selection in the North, playing through forest and dunes. It's the kind of golf course that could host a big-time event if not for its remote location.

Phil Mickelson's former swing coach, Smith designed a handful of Michigan golf courses while the economy was as hot as his name in the 1990s. He had a major hand in Treetops Resort, designing the Smith Signature golf course and the Tradition, a more walker-friendly layout. Smith also designed one of America's great par-3 golf courses, Threetops.

But his most adored creation is Arcadia Bluffs Golf Club. Designed with Warren Henderson, the links-style, fescue-laden beast on the shores of Lake Michigan is a popular pick as the state's best.

Hills, based in Toledo, Ohio, is all over Michigan. His two best northern Michigan designs are Boyne-affiliated. Bay Harbor Golf Club rates as one of Hills' most unique and spectacular layouts, playing through a quarry and above Lake Michigan. The Hills Course at Boyne Highlands, on the other hand, features mostly low-lying forest holes, plus a few holes up and down the mountain.

Devries, who worked as an intern under Doak, has a name known more regionally than nationally. But he built two phenomenal golf courses in the North -- Kingsley Club, a private facility that offers limited public play, and Greywalls. Both are raw, untamed and worthy of inclusion among Michigan's best.

Donald Ross didn't design anything in northern Michigan, but play 18 of his most famous holes around the world at the Ross Memorial at Boyne Highlands. Holes range from the famous 16th at Oakland Hills to a replica from Royal Dornoch in Scotland.

Every design buff loves the work of Alister Mackenzie. One of his finest displays, the private Crystal Downs Golf Club in Frankfurt sits within view of the great Sleeping Bear Dunes. It's an exclusive club, so scan that Rolodex for someone on the inside here.