St. Kitts and Nevis: A paradise of untapped golf potential in the Caribbean 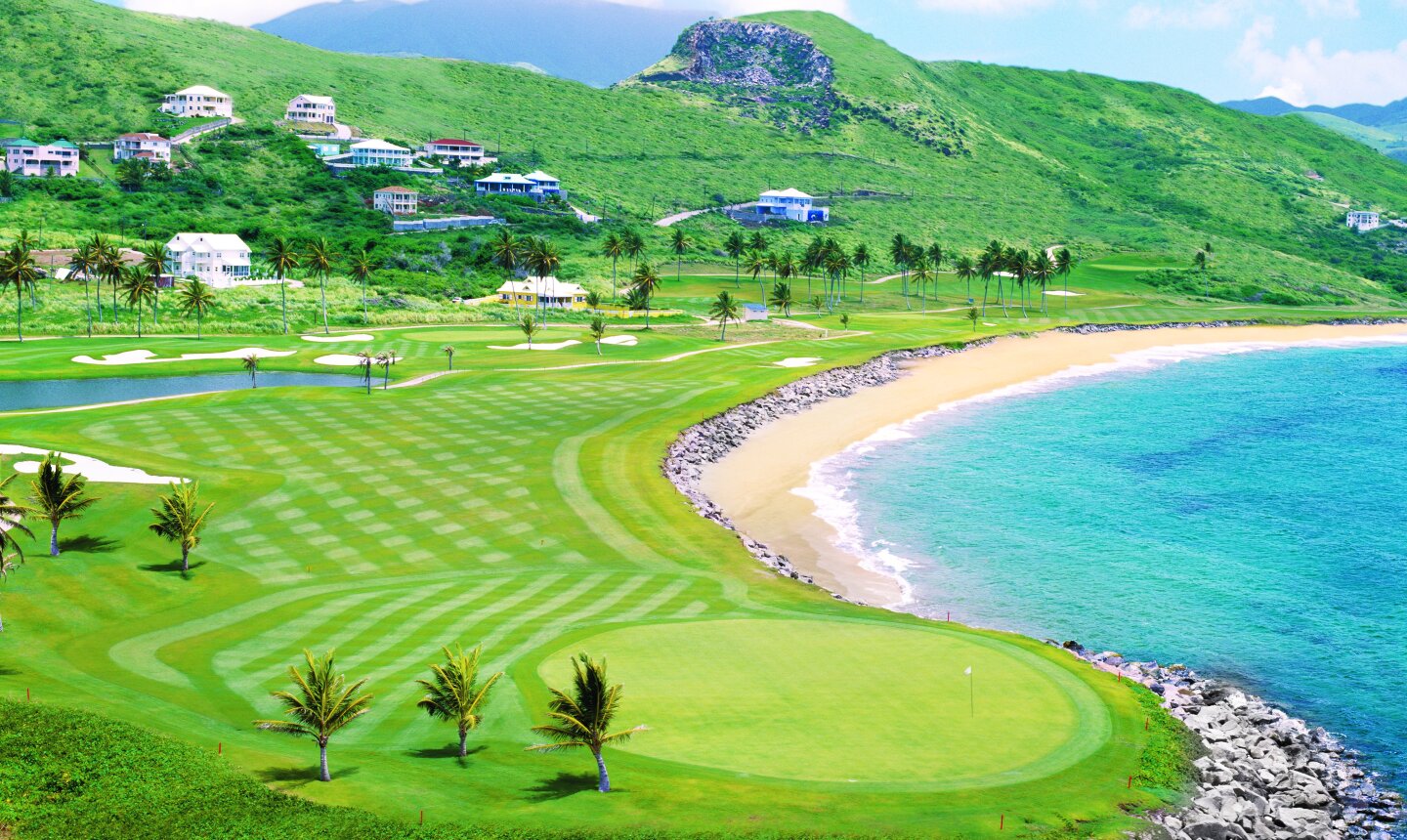 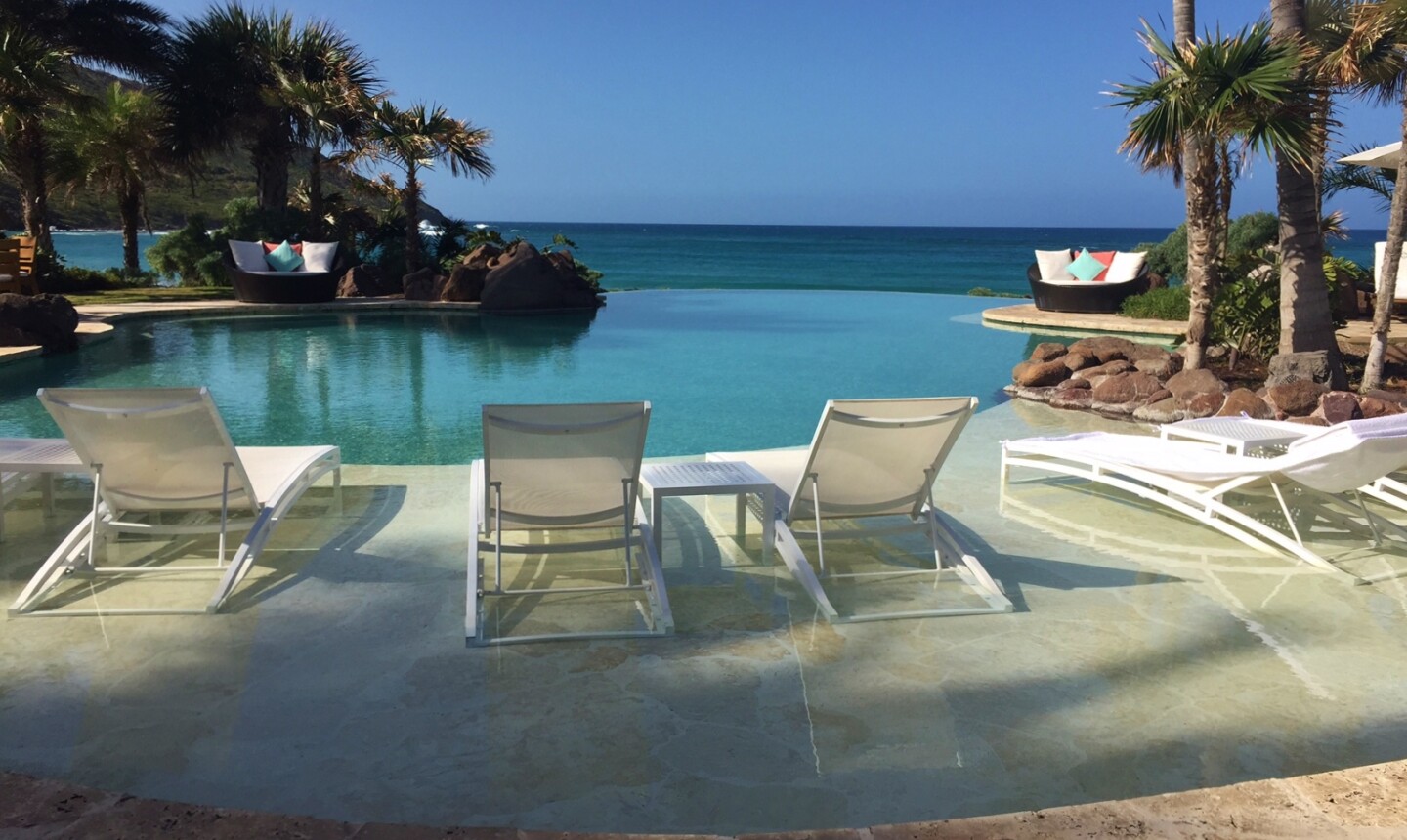 The beautiful Pavilion Beach Club at Christophe Harbour is only open to members, but guests can make dinner reservations with 24-hour notice. Jason Scott Deegan/Golf Advisor 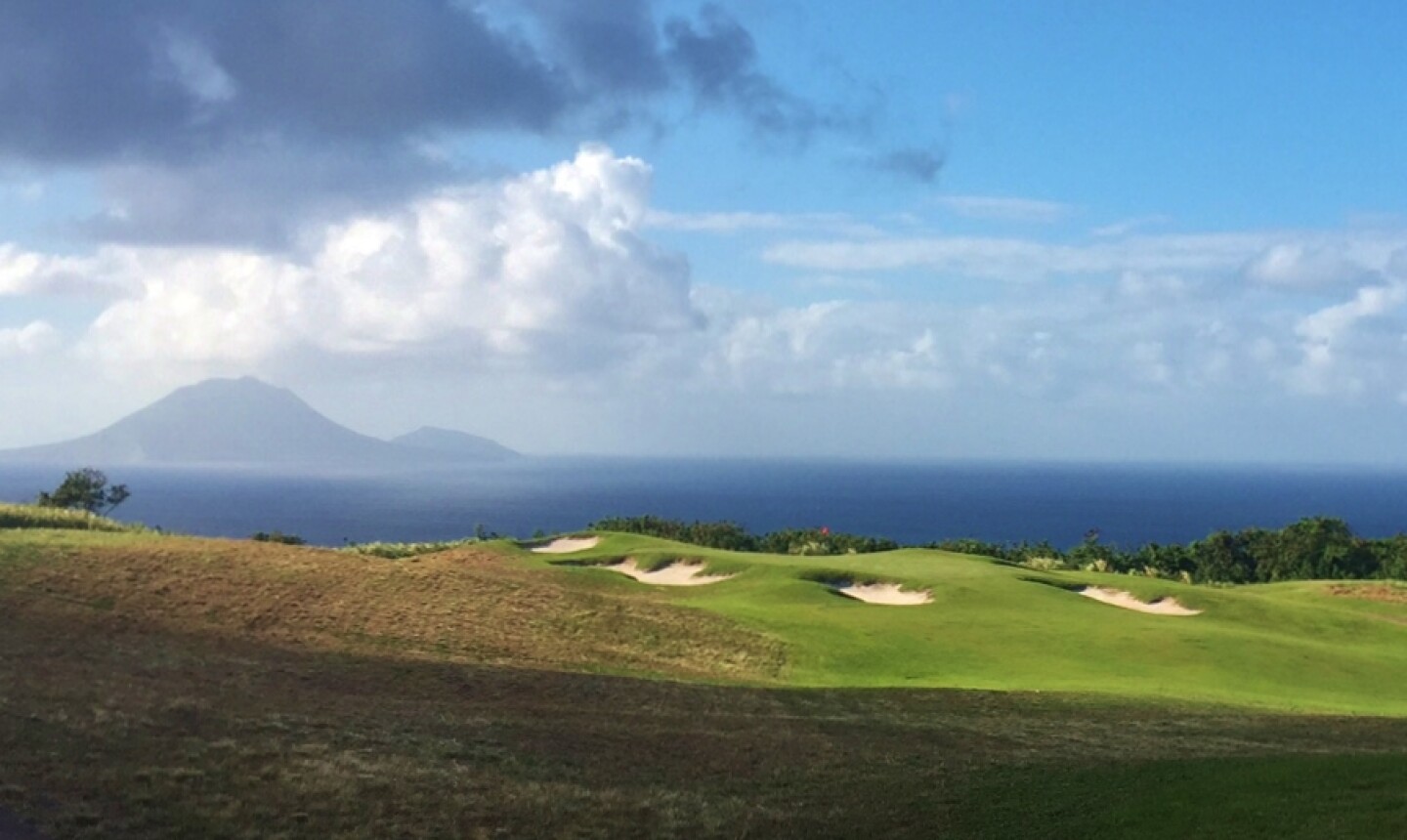 ST. KITTS AND NEVIS -- The potential for St. Kitts to become the Caribbean's next great golf destination is oh so real.

A simple drive following twisting roads shows off vast potential across an unspoiled, hilly canvas. In the northwest corner of the drumstick-shaped island situated in the Lesser Antilles about 1,300 miles southeast of Miami sits Irie Fields, a dramatic Ian Woosnam design trying to become the world's first "edible" golf course built and maintained without chemicals. In the bone of the drumstick to the southeast, Christophe Harbour has been touting its "Tom Fazio" course for a decade, but progress remains minimal.

The only game around, still, is the Royal St. Kitts Golf Club, a resort course as scenic and fun as any I've experienced in the Caribbean. That's if golfers can overlook some flaws in conditioning and aesthetics.

And let's not forget the wildly scenic Robert Trent Jones Jr. course at the Four Seasons Resort Nevis, a short water taxi ride away on the sister island of Nevis. I played both Royal St. Kitts and Nevis as part of the Admiral's Cup Pro-Am, a competition held every February that attracts four-person teams from the United Kingdom, Canada and America.

It's the perfect event, just competitive enough for the chance to win some great prizes (in addition to the usual pro-am swag) but not overly so to stress over a bad round. Between the Super Bowl party on the beach and the opening and closing dinner galas, and the spa visits and excursions for the wives who aren't playing, it might be worth clearing your calendar for the event in 2018. Check out the TGC Sports and The Golf Connection's website www.thegolf-connection.com/index.php for dates and signup information.

Let me share a few lasting impressions after five days on St. Kitts and two more on Nevis:

I'll put the last five holes at Royal St. Kitts up against just about any oceanfront course I've played. A redesign by Canadian Thomas McBroom in 2003 created an incredible finishing stretch right on the Atlantic.

It's the same breathtaking setting as the beachfront St. Kitts Marriott Resort & The Royal Beach Casino, built in 2003 on North Frigate Bay Beach down the road. The Marriott boasts 393 guest rooms and suites -- all of them oversized -- beyond an open-air lobby of shops and restaurants. The Caribbean's largest Vegas-style casino, three pools, a spa, fitness center, meeting facilities, eight restaurants, three lounges and a kids club program give the Marriott a diversity to cater to any traveler.

St. Kitts is laidback and unpretentious, the perfect place to unwind from winter.

St. Kitts should be on every winter bucket list. Why not during the Admiral's Cup ProAm?

Nevis, on the other hand, fosters a more exclusive vibe. It's only accessible by a pricey water taxi from St. Kitts or commercial flights from another island. Do you want to hang with the Four Seasons crowd or the Marriott crowd? That's essentially the difference.

The Caribbean's first Four Seasons celebrated its 25th anniversary in 2016 by changing ownership. Upgrades could be on the way, although it's hard to find fault with too much. The spa is outstanding and the food exquisite. The beach is sandier and more swimmable than the St. Kitts Marriott. Even the nearby beach shacks are a cut above. The colorful Sunshine's Beach Bar & Grill is famous for the legendary Killer Bee rum punch, but the food rocks, too.

My recap of the paradise called "Nevis" in the Caribbean.

I stayed in a multimillion-dollar, three-bedroom villa owned by the Four Seasons Resort Estates, which handles all the real estate within the surrounding community. The villa comes with a golf cart, private house pool overlooking the course and beautiful furnishings. You can see some of the best homes of this flourishing community from the golf course, which rides up and down Mount Nevis with some tough holes accompanied by beautiful scenery. If I had a spare couple million, I could see the investment of owning property being worthwhile.

The island itself is full of surprises. Lunch at the Golden Rock Inn, a boutique hotel that was an old sugarcane plantation, turned into a treat. And who knew Alexander Hamilton lived in Nevis for a good portion of his youth? His old home on the waterfront is now a small museum.

Back on St. Kitts, Irie Fields is merely one fragment of the impressive Kittitian Hill development, all built on the premise of sustainability in the foothills of a dormant volcano, Mount Liamuiga.

In 2014, Belle Mont Farm debuted its stunning collection of one-bedroom guesthouses and farmhouses, larger homes built around a central pavilion with a private 100-foot-infinity-edge pool. It's hard not to fall in love with the guesthouses and their outdoor bathrooms located under open-air verandas and private plunge pools. Another development, Yaya Groves, is home to three- and four-bedroom villas that feel palatial compared to the intimate guesthouses.

As you can imagine, all the food is farm-to-table fresh. Sitting at The Farm, a 30-foot-long outdoor table designed for seasonal community meals, guests can look down upon the vegetable and fruit garden where their food originated.

Sound like paradise? It does until you start talking golf. St. Kitts desperately wants and needs a second golf course to attract more players, but growing an entirely organic course is proving to be a monumental task.

Irie Fields has impressive views and ecological accolades. It is the first golf course to attain the GEO Certified® – Developments status, setting new standards for golf course developments that recognized the opportunity to contribute more positive social and environmental impacts across the design, planning and construction of the course. According to a GEO press release, more than 95 percent of staff involved in the construction originated from St. Kitts and more than 97 percent of the construction materials were sourced from the island.

What the project lacks is a certain future and golfers. Our tour exposed fairways that are semi-playable at best. The greens are not. Many the holes are lined with overgrown vegetation that needs to be cut back for a more resort-friendly appearance.

The maintenance staff faces never-ending challenges dealing with weeds and ants without chemicals. Applying vinegar kills the weeds but scorches the turf. And let's be honest, not even Augusta National could afford to pay the necessary manpower to pull every weed by hand.

Kittitian Hill founder Val Kempadoo's vision is commendable, but there are many skeptics who openly question if such a course is feasible. It's definitely a project that could have implications for the future of golf should it succeed or fail. The jury remains out. There is no timetable for when Irie Fields could officially open. It's essentially in environmental limbo.

At least Irie Fields has grass, something you can't say about Christophe Harbour. I first heard about this lavish real estate and resort community in 2009 while dining with developer "Buddy" Darby at the lavish Doonbeg Resort in Ireland.

Doonbeg's bankruptcy and sale to Donald Trump and Darby's split from his family of investors at Kiawah Partners have been major stumbling blocks to Christophe Harbour. Progress has been made, but not on the golf course. From a lookout point, our tour guide pointed out the stunning site for the course, but we weren't allowed to get close. There wasn't anything resembling construction or the shaping of holes.

The good news is the 126-room Park Hyatt St. Kitts on Banana Bay -- one of three hotels promised -- will finally open later this year, rivaling the Four Seasons Resort Nevis for luxury. It could speed up the need for the course. although Royal St. Kitts is merely a 15-minute drive away.

What's already built is first class. The marina for mega yachts is great … if you're a millionaire. The Pavilion Beach Club located on one of the island's most beautiful beaches on Sandy Bank Bay is amazing … if you're a yacht club member or property owner.

In so many ways, Christophe Harbour symbolizes the St. Kitts golf scene -- it's a paradise with untapped potential. The question is: How long must we wait for the final prize?

Tim Gavrich
Senior Writer
Now Reading
St. Kitts and Nevis: A paradise of untapped golf potential in the Caribbean
Search Near Me