The 10 greatest lighthouses in golf 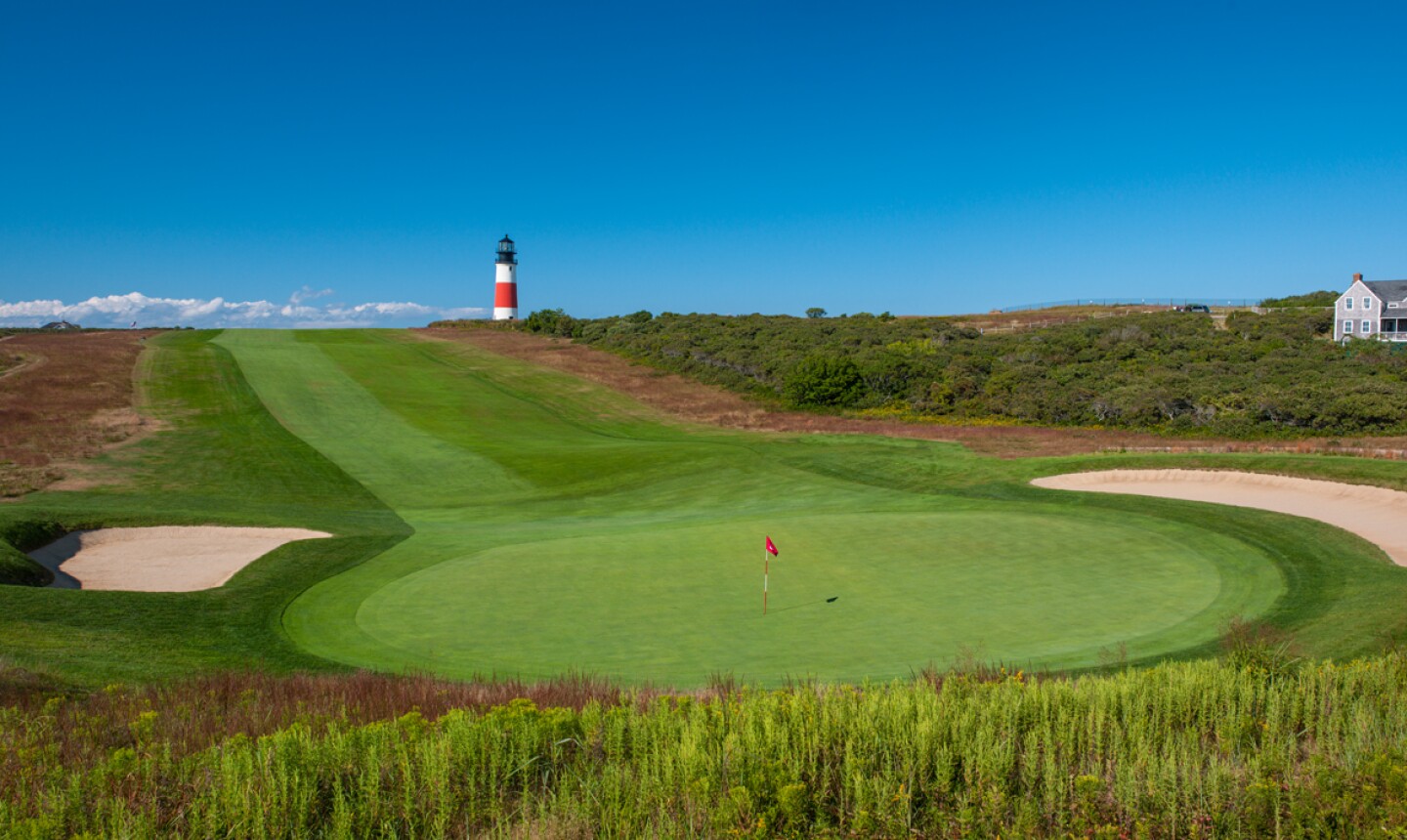 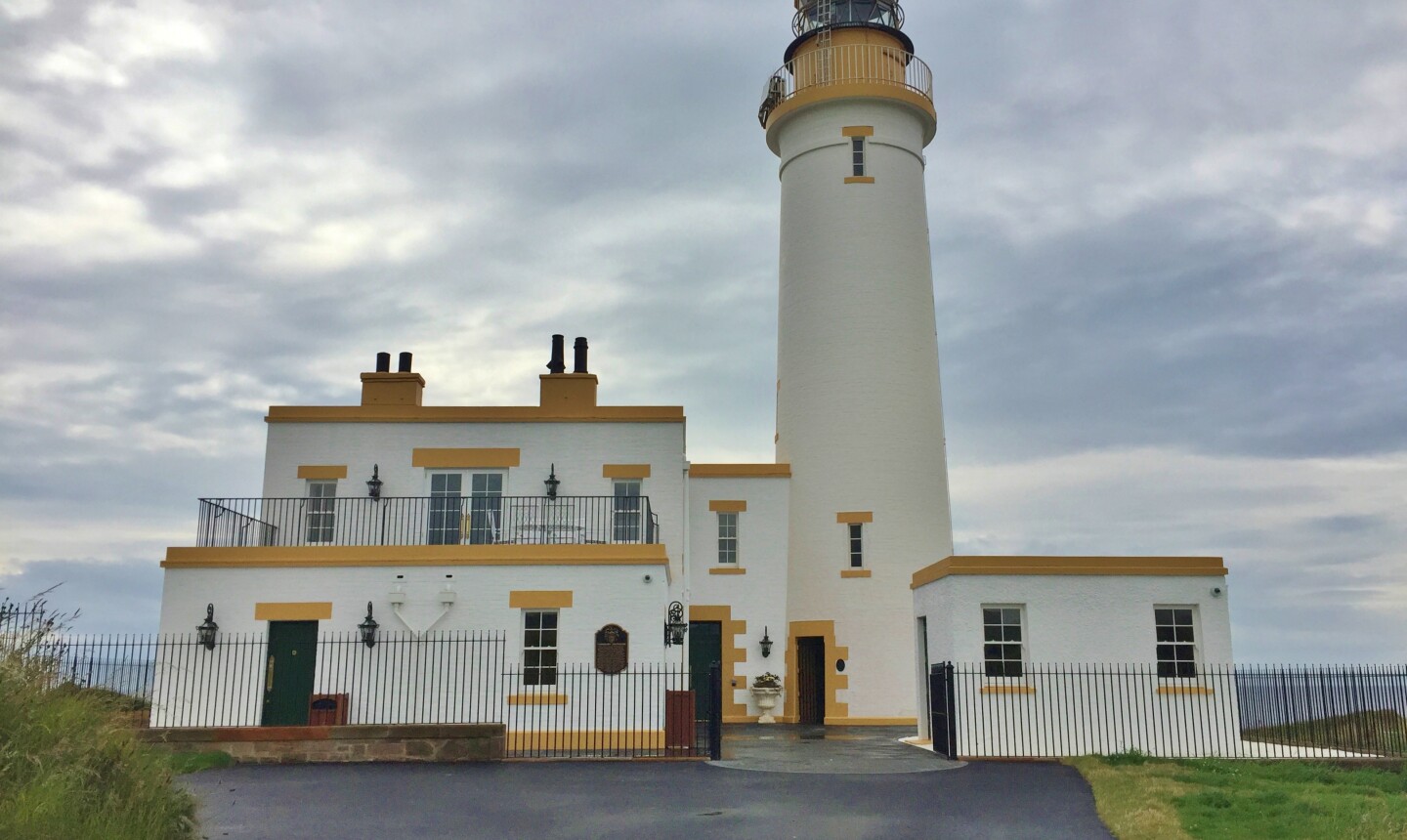 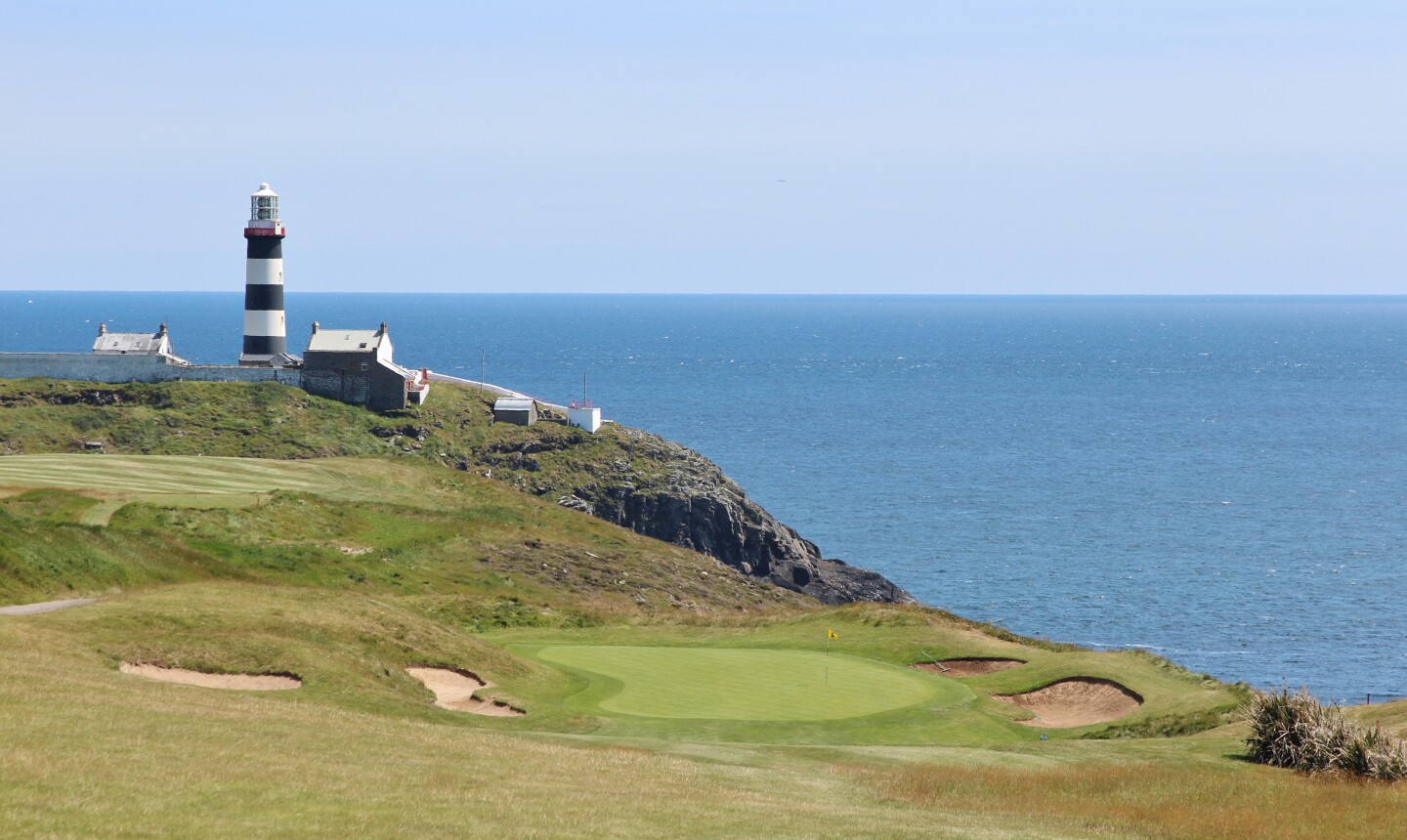 The 15th hole at the Old Head Golf Links can be driven with a 284-yard poke from the white tees. Jason Scott Deegan/Golf Advisor 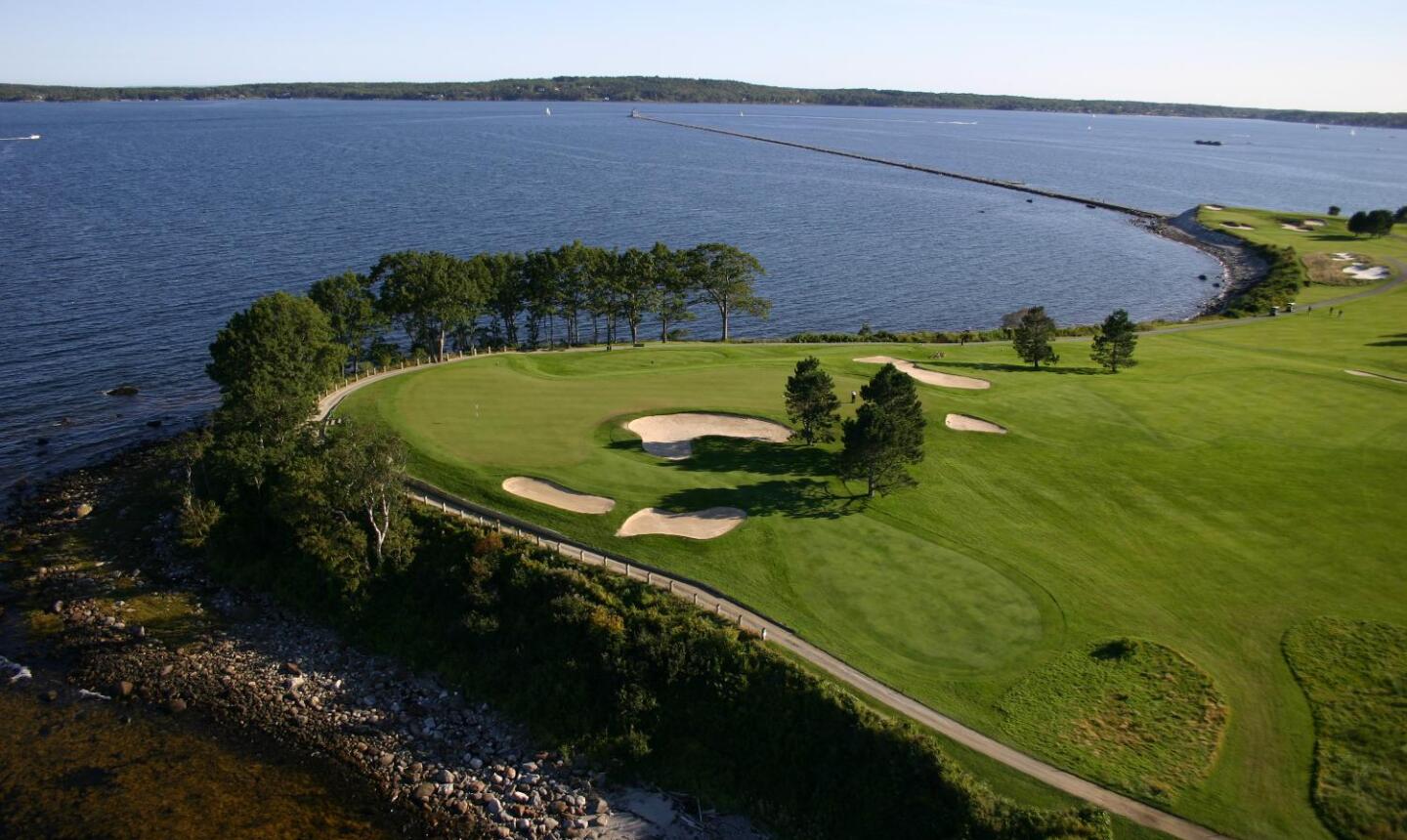 The setting of the Samoset Golf Course - with the breakwall leading to a lighthouse in the bay - is one of the prettiest in the Northeast. Courtesy of Samoset

Would the 18th hole on the Harbour Town Golf Links on Hilton Head Island, S.C., be as famous if the candy-cane-striped lighthouse weren’t there?

Probably not. Adding a lighthouse to the backdrop takes a beautiful golf course setting on the water to a whole other level. They can be found on the east and west coasts, as well as around Ireland and British Isles.

Grab your camera and your clubs. Here's a tour of the 10 best golf courses within view of a lighthouse.

Course: The Ocean Course at Hokuala was recently renamed after years of being called Kauai Lagoons. The scenic Nicklaus design, a former 36-hole club before being chopped up and rerouted several times, is known for having the longest stretch of continuous oceanfront holes (Nos. 12-16) in all of Hawaii.

Lighthouse: The 242-foot-tall lighthouse is part of the spectacular castle-style clubhouse completed in 2008 on a hilltop, overlooking the Hudson River and the New York Harbor.

Course: Sporting views of the New York City skyline and the Statue of Liberty, this private club transformed an old dumping site into a linksy course of fescue and mounds in 2006. Walking with a caddie is required. The Bayonne Golf Club is so exclusive that even the one percent of the one percent have trouble getting on.

Lighthouse: The historic and supposedly haunted Leamington Lighthouse, originally known as the Hilton Head Range Light Station, was built in 1879 as part of a larger system of navigation lights guiding ships into the Port Royal Sound. In the mid-1980s, the 87-foot-tall lighthouse was moved to its current location, where it directs golfers to the fifth and 15th greens. The story goes that, in August 1898, the lighthouse keeper died of a heart attack before urging his daughter to keep the light burning. She died three weeks later. It has been reported that a girl (who wears her blue dress), known as “The Blue Lady”, has been seen in one of the lighthouse windows or at the foot of the lighthouse on stormy nights.

Course: With water on 10 holes, tree-lined fairways and plenty of doglegs, the 6,651-yard Arthur Hills Golf Course at Palmetto Dunes Golf Resort can haunt golfers, too. It is undoubtedly the most challenging of the three layouts at Palmetto Dunes.

Lighthouse: The 43-foot-tall Point Pinos lighthouse, lit in 1855, is the oldest continuously operating lighthouse on the West coast. Listed on the National Register of Historic Places, it is open for tours 1-4 p.m. Thursday through Monday.

Course: The "Poor Man’s Pebble Beach," a quirky city-owned muni of 5,727 yards, starts with back-to-back par 3s before a glorious back nine tours the shores and dunes of the famed Monterey Peninsula. Rates on Pacific Grove Golf Links max out at $69.

Lighthouse: The 39-foot-tall Rockland Breakwater Lighthouse, dating to 1902, opens its interior on weekends from May to October, weather permitting. For resort guests, it’s nearly a two-mile walk out and back on the rocky seawall.

Course: The 6,548-yard course at Samoset Resort On The Ocean, a classic dating to 1902, was stretched to 18 holes in 1974. Renovations by Geoffrey Cornish (1990s) and Bradley Booth (in 2000) have improved many of the holes. The signature par-5 fourth hole (picture above) winds along Penobscot Bay with views of the lighthouse, followed by a 185-yard par 3 with a tee box near the seawall.

Lighthouse: The 70-foot-tall Sankaty Head Lighthouse was commissioned in 1850.

Course: Sankaty Head Golf Club, a classic private club on Nantucket island off of Cape Cod, is famous for its Caddy Camp that houses young boys from around the country, training them as caddies. The fourth, 15th and 18th holes of the 6,711-yard layout play towards the lighthouse.

Course: This Mike DeVries design has quickly risen to the top of the world rankings. Consider that eight holes run parallel to Bass Strait with two other greens and three other tees right on the ocean. The final holes starting at no. 14 play in the lighthouse loop on Victoria Cove.

Lighthouse: The black-and-white-stripped Old Head of Kinsale Lighthouse sits at the end of a 220-acre diamond-shaped promontory that juts into the Atlantic Ocean in the southwest of Ireland. It is the nearest point of land (11 miles) to where the RMS Lusitania was sunk in 1915. The original light lit on the site dates to 1665, although the current 98-foot tower was built in 1853.

Course: Old Head, built in 1997, might be the most scenic in the world. The cliffs drop 300 feet to the ocean below, creating jaw-dropping views and dramatic holes. The fourth hole plays directly toward the lighthouse with the final uphill tee shot on no. 18 just steps from the lighthouse.

Lighthouse: The 90-foot, red-and-white Harbour Town Light at the entrance of the Harbour Town Marina was completed in 1970. Tourists can climb to the top for the views or visit its museum and gift shop.

Course: Hitting tiny greens and narrow fairways are the challenge at Harbour Town, a Pete Dye/Nicklaus collaboration on the Calibogue Sound that has hosted the PGA Tour since opening in 1969.

Lighthouse: Dating to 1878, the iconic 79-foot Turnberry Lighthouse marks the remains of the 13th-century castle of Robert the Bruce. It was designed by David and Thomas Stevenson (related to author Robert Louis Stevenson). Resort owner Donald Trump transformed the building into a glamorous halfway house on the edge of the cliffs with a two-bedroom luxury suite costing £3,500 and up a night on the second level.

Course: Under the 2016 renovation by Martin Ebert, the 7,489-yard Ailsa links went from having two par 5s and four par 3s to four par 5s and five par 3s. The inspiring new eight-hole stretch from the fourth through the 11th holes might be the most magnificent run of coastal golf in the world. The four-time Open championship host is now ready for its fifth. The Kintyre links, also revamped by Ebert, offers even more views of golf’s greatest lighthouse.

OLD HEAD IS GREAT,,JACK HANTON WEXFORD ,,how about a game at St Hellens