9 things I learned from 'The Match: Champions for Charity’

Sunday's entertaining event was a vast improvement over the first made-for-TV Match.

You know what? That was a lot of fun.

Like many, I was fairly critical of the first installment of ’The Match,’ which pitted Tiger Woods against Phil Mickelson for a cool $9 million back on Black Friday 2018. A flawed premise, uneven play, clunky production and some technical glitches made it a bumpy ride, but overall it was an interesting experience.

The second version, in short, was a lot better, both in terms of golf entertainment and production quality. The addition of Peyton Manning and Tom Brady to the “field” proved an inspired choice, as it helped make the event watchable for people outside the hardcore golf fanbase. It also raised $20 million for charities combating the coronavirus pandemic. And the two quarterbacks actually hit some meaningful shots (more on these in a minute).

Here are 9 things I took away from The Match: Champions for Charity.

1. Tiger Woods was not going 0-2 against Phil Mickelson.

Sure, only bragging rights were on the line this time around, but you wouldn’t have guessed it to see Tiger’s demeanor change as the match wore on. He supplied some caustic banter early on, at one point calling out Mickelson's U.S. Open near-misses and his own three wins in the event as he and Manning surged to a 3-up lead on the front nine. But as Mickelson and Brady drew closer, Woods put on his game face, saying little over the closing holes. His swing looked dialed-in and he was clearly comfortable on his home course, striking the ball solidly the whole round as he shepherded Manning to the win.

For the first six and a half holes, Tom Brady absolutely stunk up the joint. He duck-hooked his opening tee shot and then proceeded to lose what seemed like a dozen golf balls, prompting widespread skepticism about his 8.1 handicap index.

The par-5 7th hole didn’t begin well, either, but Brady found himself in the fairway lying three. Charles Barkley, who proved he has both insight and comic relief to add to broadcasts outside of basketball, jawed in Brady’s ear as he addressed his fourth shot.

What happened next was the signature moment of the day.

To cap it off, Brady split his trousers bending over to pluck his ball from the cup and played the rest of the round in baggy rain pants.

I mean I can’t believe Brady split his pants on top of all this pic.twitter.com/xP9VdAdRRN

Between the amateur heroics, the banter and general lightened mood, it showed how much a golf broadcast can depart from the norm and remain exciting to watch, and it reminded many sports fans of Brady’s knack for pulling greatness out of nowhere.

3. Justin Thomas has a future in broadcasting…eventually.

The 2017 PGA Champion and pro golf phenom joined the TNT telecast as an on-course analyst and did a flat-out great job. His insider status enabled him to toggle naturally between genuine insight and barb-trading with various characters in the match.

"Chuck, I'd love to see your fat ass try to dunk a basketball right now." - Justin Thomas from the top rope pic.twitter.com/QkQRg94YBQ

Tony Romo has become football’s most sought-after analyst in his short career as such because he has recent, real insight into the action that he can articulate in a way enriches an audience’s view of a game. Thomas has the same gift, but unlike Romo, he has a couple more decades of golf to play at the highest level, so we’ll probably have to wait a while for more of this from him.

When the broadcast began at 3 p.m. local time, it was looking like it was time to line up two of everything at the clubhouse of the prestigious private club that hosted the event. Early shots of the course and practice facilities showed greens that had become ponds. That the course was ready after a 45-minute delay and that play didn’t need to be stopped even after some heavy rain during the match is a testament to the course’s maintenance staff.

That said, my main criticism of the event has to do with the golf course. Unlike last week's TaylorMade Driving relief, where host venue Seminole Golf Club co-starred along with the four players, the Champions for Charity broadcast revealed the bare minimum about its host course. No significant mention of Pete Dye, who co-designed it with Greg Norman. No mention of the recent renovation work by Bobby Weed. I thought the golf course deserved a bit more attention from the announcers. 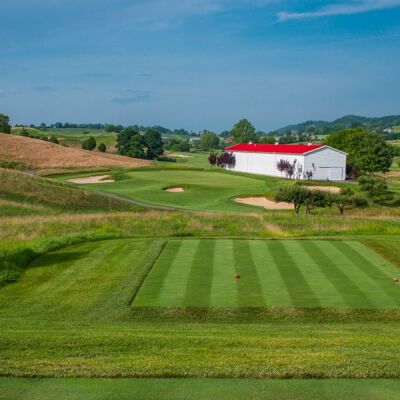 5. Peyton Manning wears a lot of hats, including the hero one.

Despite Brady’s occasional heroics, Manning outshined him both as a player and a personality during the event. His hat-changing bit throughout the round was amusing, and he was the more talkative of the quarterbacks.

“I’m not gonna let Kirby Smart get a picture of me in black and red for their social media account.” - 👑pic.twitter.com/khqY4Q7yR1

Despite Brady’s hole-out, Manning hit the most important shot of the match, a tee shot on the par-3 16th to inches from the cup after both Brady and Mickelson had stiffed their tee shots, too. Manning and Woods clung to a precarious 1-up lead at that point, so it was a do-or-die situation. Once again, the ability to handle pressure crossed sporting lines.

6. Any opportunity to listen to Phil Mickelson talk through a golf shot is a pleasure.

Tiger Woods was the greatest golfer of the day, but as ever, Mickelson was the showman. His greatest moment of the match came early, as he explained to Justin Thomas precisely how he planned to play a tricky pitch shot on the second hole, and then executed it to near-perfection.

Class is in session. 👨‍🏫@PhilMickelson explains the chip shot he wants to hit and why ... pic.twitter.com/Vbqzgk4ayk

With darkness looming, the split format of the match made the difference between a twilight conclusion and a disjointed, unsatisfying Monday finish. The first nine, which was a four-ball format, took nearly three hours to play, and if it had continued the rest of the way, there was no chance of finishing before dark.

Thankfully, the back nine was a modified alternate shot, reducing the number of golf balls in play from four to two. As a result, the group played a full hour faster, reaching the 18th hole just after 8 pm.

Golf buddy trips are starting to shy away from all-you-can-play days of golf, but if you want to get a second round in without wearing yourself out, alternate-shot is a nice way to halve the number of shots each player has to hit while doubling the intensity of any potential bet.

8. Tiger and Peyton were not the only winners.

Part of what made Champions for Charity so much more enjoyable than the $9 million Shadow Creek match was that the quartet of players were competing for something higher than just another gaudy payday. The event was underpinned from the start with $10 million to be distributed to various COVID-19 relief charities, but that amount doubled over the course of the afternoon, with viewers donating via phone and other sports figures stepping up to get involved. Brady’s holeout netted a $100k donation from Brooks Koepka, and Seattle Seahawks quarterback Russell Wilson pledge a hefty donation to Feeding America in the wake of the spectacular shots on 16. Whereas the first Match felt a little slimy because the players were playing entirely for themselves, the second installment felt good for everyone because of the wider benefit.

9. Charles Barkley was a great member of the telecast, but he still stinks at golf.

It was a complete afterthought due to the hasty end of the round, but After everything was finished, TNT aired Charles Barkley’s attempt to make a bogey on the 18th hole at Medalist for a souped-up donation on top of the rest of the day’s largesse. He failed, but $100,000 went to the cause anyway. Keep practicing, Chuck.

Chuck came up just a bit short in his Bogey or Better Challenge for charity 😅#CapitalOnesTheMatch pic.twitter.com/gmd8JSOdkS 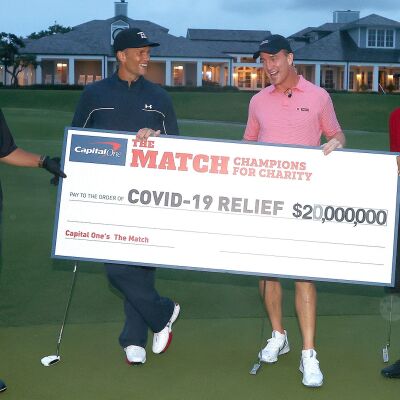 Did you enjoy watching The Match: Champions For Charity? Let us know in the comments below!

Loved watching this match, so much more enjoyable than the last one with Mike Tirico yapping all the time as well as the mindless Bill Murray dialogue. I really enjoyed the pace of play. I wonder why the pros don’t always play like this with carts, automatic range finders, and shorts as Tiger has requested so many times. They were like us regular hackers but having fun as well. I think all pros would play better if they had this type of pace and got into a faster rhythm…

Thought the front 9 was a bit slow but really enjoyed the back. Don’t know what they would have done if TW & PM boat raced them 6&5 which looked like where it was heading. Did they have a way to press if they needed more programming?

Thourghly enjoyed the coverage and banter between competetors as well as Barkley! Job well done! just wish the weather had been as good.

It was fun to watch. Never watch the complete first match,it was boring. This one was great.

I watched with my dad who taught me how to play the game. We both enjoyed the entire game, laughing with the good pokes of fun, the amazing "how did he do that" shots, is it ever going to stop raining, and of course - the best part, helping so many who need it now. Thank you!

I very much enjoyed The Match. It was great to see two Hall of Fame athletes, in football, compete with and against two Hall of Fame athletes in golf, on the golfers’ ‘home turf.’ Tom didn’t have his best day but, once he retires, he’s going to be a very good golfer - just needs a little practice time. Loved the banter and almost fell out of my chair on JT’s comment on Charles’ derrière. Great entertainment.

Great format - should continue by including the celebrities from the world of sports that have direct competitive history like Manning and Brady had. Do not know what the problem was but I have a feeling a lot more money could have been raised but the system to place your donation was not working.

I particularly enjoyed the banter from the players and the studio talking heads. And was pleasantly surprised with the lack of grousing from the players about the weather...kudos to them. From 3000 miles away (WA State) this was a much more interesting course and format than the Seminole event a few weeks ago.

I thought it odd that Tiger had to have home course advantage AND by far the better partner in order to pull out a one up victory. Seemed like a stacked deck from the outset.

I love the match. It felt like the games I play with my buddies . All the busting and trash talk.
Charles was great .
I would watch another one .Even if it was 4 pros.

Tim Gavrich
Senior Writer
Now Reading
9 things I learned from 'The Match: Champions for Charity’
Search Near Me