The Prairie Club rises from the Sandhills of nowhere, Nebraska 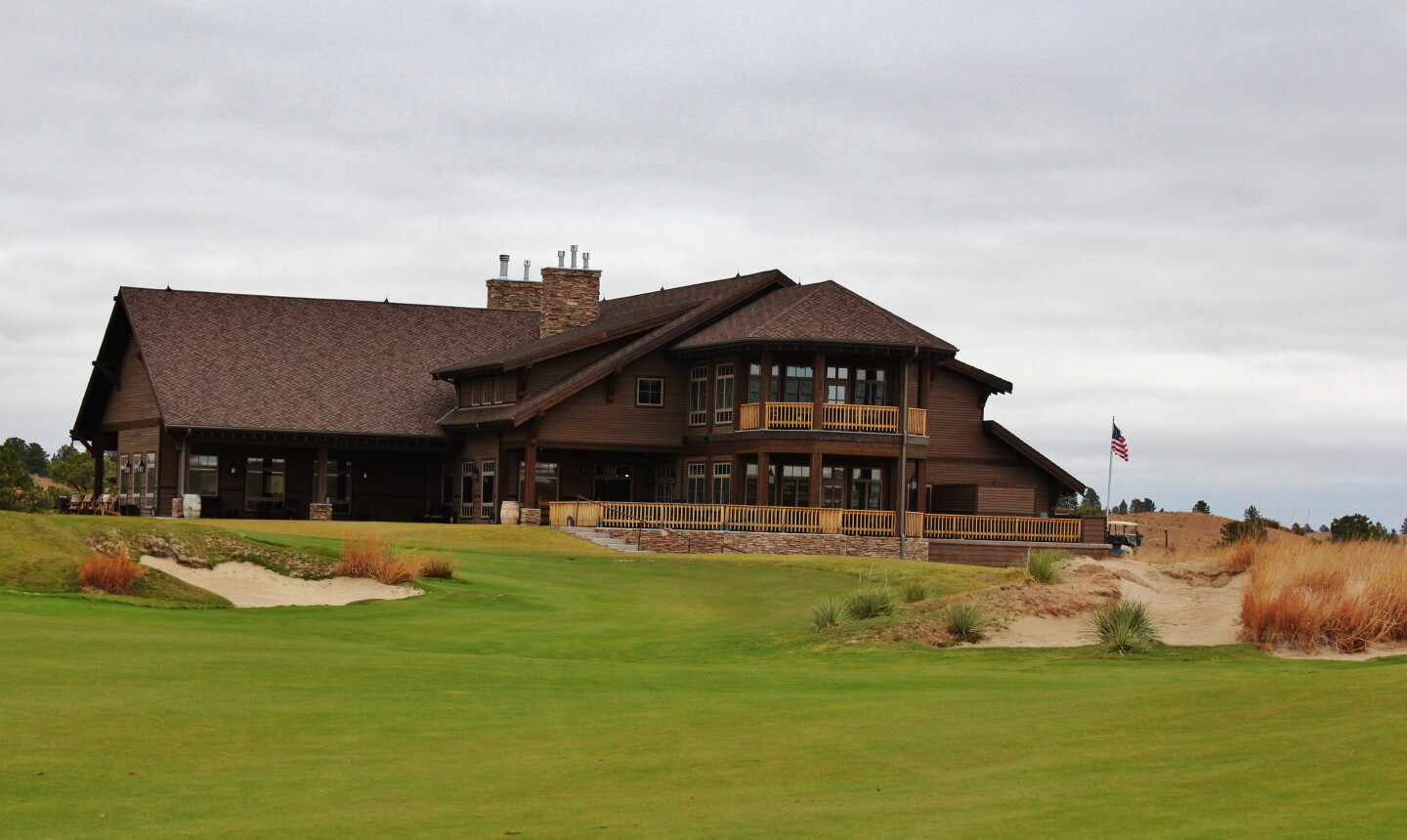 The Lodge at The Prairie Club houses 31 guest rooms, a pro shop, a members lounge, a restaurant/bar and more. Jason Scott Deegan/Golf Advisor 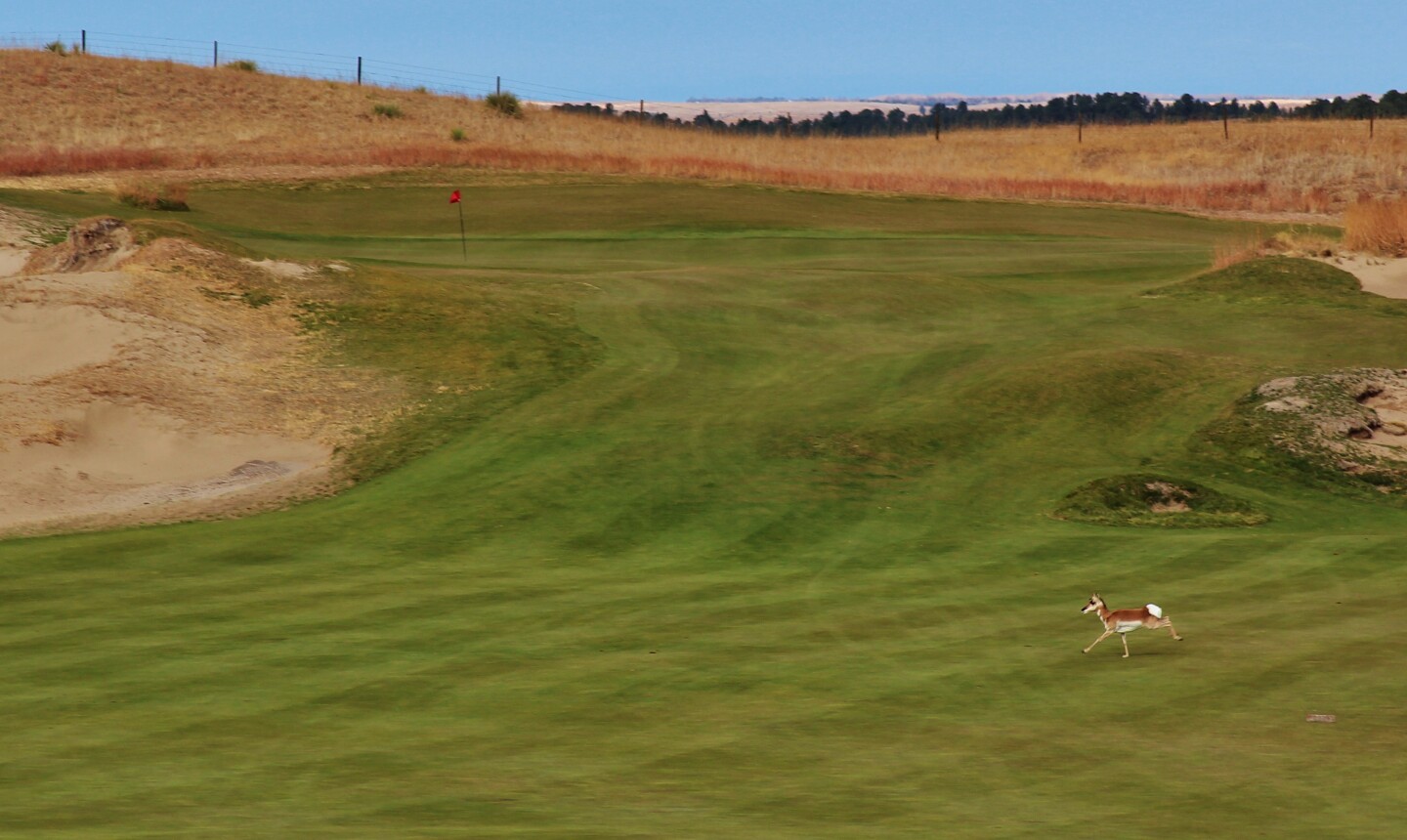 An antelope races across the 12th fairway of the Dunes Course at The Prairie Club. Jason Scott Deegan/Golf Advisor 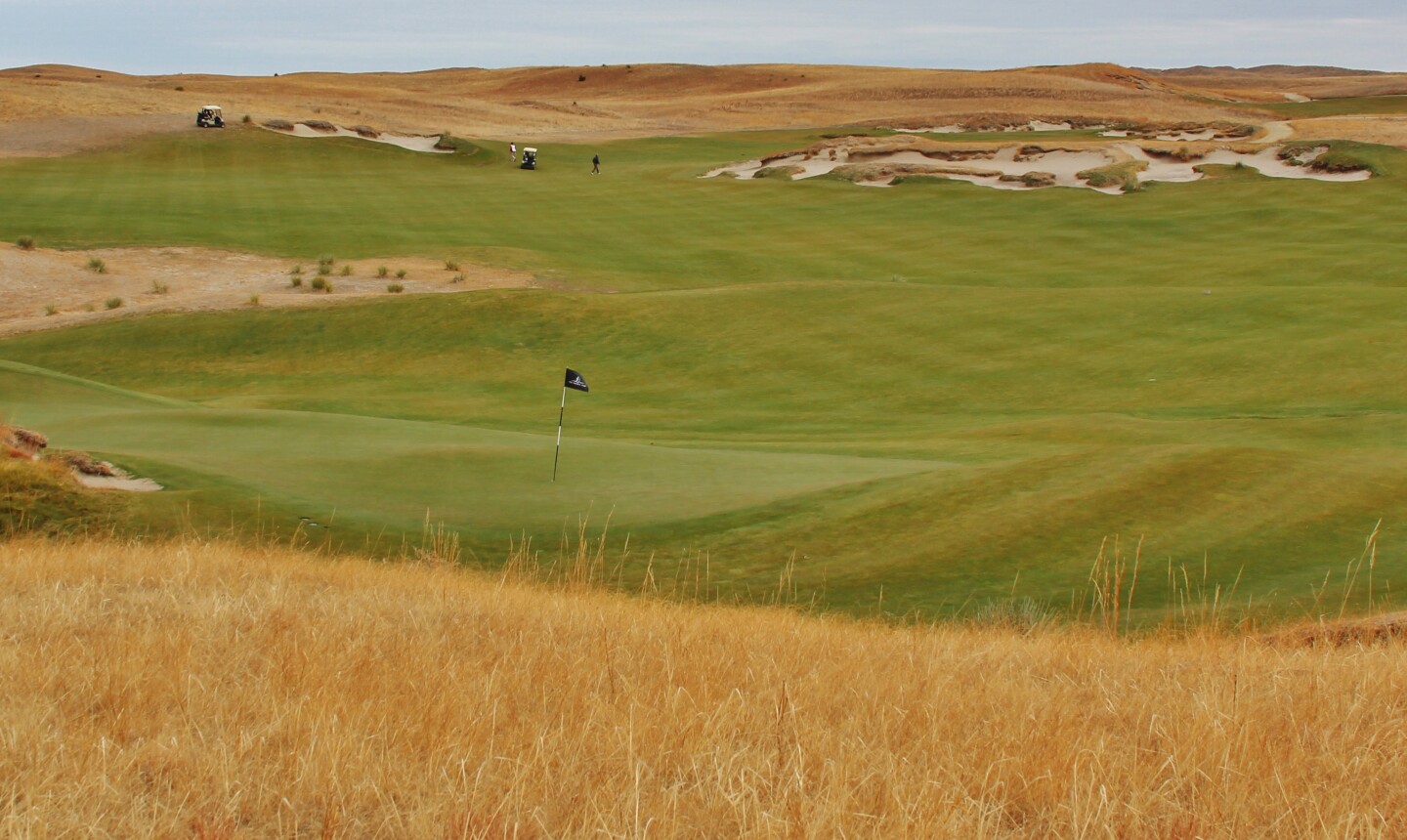 The views can stretch for miles on the Pines Course at The Prairie Club. Jason Scott Deegan/GolfPass VALENTINE, Neb. -- Imagine the plains as they once were when American settlers drove through riding wagon trains.

There are large stretches of the drive to The Prairie Club that still look and feel the same. Other than the road you're on, there's nothing to be seen for miles, just undisturbed, rolling prairieland in all directions.

Sometimes in life, it's not the destination but the journey that makes a trip memorable. The Prairie Club delivers on both accounts.

The Prairie Club, buried in central Nebraska's famed Sandhills, is the Heartland's version of Bandon Dunes. There's no easy way to find this tiny town near the South Dakota border flying commercial. Every regional airport -- North Platte and Kearney in Nebraska and Pierre and Rapid City in South Dakota -- remains at least 100 miles away. Larger metropolitan airports near Denver and Omaha require six-hour jaunts by car.

Its remote location isn't all bad, however. The mile-long drive on a gravel road into the club just heightens the sense of anticipation. At long last, the Dunes Course and the Pines Course and lodge emerge from the rugged landscape.

"Some people like the remoteness," said Patrick Kilbride, the club's head professional. "There is no one out here. The cellphone might or might not work. It's a getaway. That is not a bad thing for people these days."

The Prairie Club burst onto the Sandhills scene in 2010, following the blazing trail set by Sandhills Golf Club and Dismal River Golf Course, two noteworthy private clubs located roughly an hour south in Mullen. The Prairie Club, developed by venture capitalist Paul Schrock, has plans to eventually add a third course and go completely private. For now, it's an inspiring retreat for anybody brave enough to make the trek.

Golf at The Prairie Club: A contrast in styles

Members rave about the stark contrasts between the Dunes Course by Tom Lehman and Chris Brands and the Pines Course by Graham Marsh.

Both par-73 layouts share some of the same dunes, but the Pines features tougher greens and some tighter fairways tucked into the ponderosa pines near the Snake River Canyon. The fairways of the Dunes -- ranked 78th in Golf Magazine's top 100 public courses in the country -- sprawl out wider than a Walmart parking lot. Demanding greens, many elevated atop dunes or hidden behind artfully cut bunkers, don't allow easy access. Winds average 20 mph every day, Kilbride said, another indication that the firm-and-fast Dunes Course plays like a links.

Dave Hanten, a member from Sioux Falls, S.D., uses the words "endless strategy" and "great shot values" to describe the experience of playing at The Prairie Club. Golfweek ranks the Dunes second and the Pines fourth among the state's top public courses.

"Both are outstanding," Hanten said. "I've asked 30 to 40 people which (course) they like the best they have a hard time telling me. That's what I love. The Dunes is rated higher. If someone said I could only play one the rest of my life, I would have a tough decision."

A greens fee gives guests bonus golf on the Horse Course, a unique 10-hole par-3 routing by Gil Hanse. The premise is golfers can toss a ball on the ground anywhere (there are no tees) and call their shot to different greens on the course, mimicking the "Horse" game played in basketball. Kilbride said most groups just follow the 10-hole routing.

"It's scenic and challenging," he said. "A lot people use it for more wagering."

Hanten said the Horse Course sounded "hokey" when he first read about it.

Plans are once membership reaches 400 (Kilbride said the 2012 season ended at 330), construction will start on "Old School," a routing by Hanse that will better utilize the canyon rim. It could end up being the best of the three.

Accommodations at The Prairie Club: A real rustic treat

Life at The Prairie Club revolves around its rustic lodge. Its 31 rooms -- coupled with the four separate cabins out back -- combine for 59 rooms and 89 beds to house guests. The cabins, all overlooking the canyon, feature four bedrooms with their own bathrooms on each floor -- all connected by a common area with a wet bar, card table and TV.

The staff sets out treats of lemonade, bread and candy in the lobby of the lodge to make guests feel extra welcome. The small Wine Room and larger Canyon Room are used primarily for private functions. The Caprock Lounge is where golfers cozy up to the copper bar, lounge on the patio near the 18th green of the Pines Course or snuggle up to the fire for drinks and dinner. The food is superb under the direction of Executive Chef Eric Miller.

Upstairs, the Eagle's Nest serves as a private bar for members. Terry Nielson, another member from Sioux Falls, loved his first visit staying in the cabin so much he convinced a family member to join the club without even setting foot on property.

Getting here might be tough, but it's not as hard as leaving.

Tim Gavrich
Senior Writer
Now Reading
The Prairie Club rises from the Sandhills of nowhere, Nebraska
Search Near Me