Trip Dispatch: Flying high on the golf course and off in Las Vegas 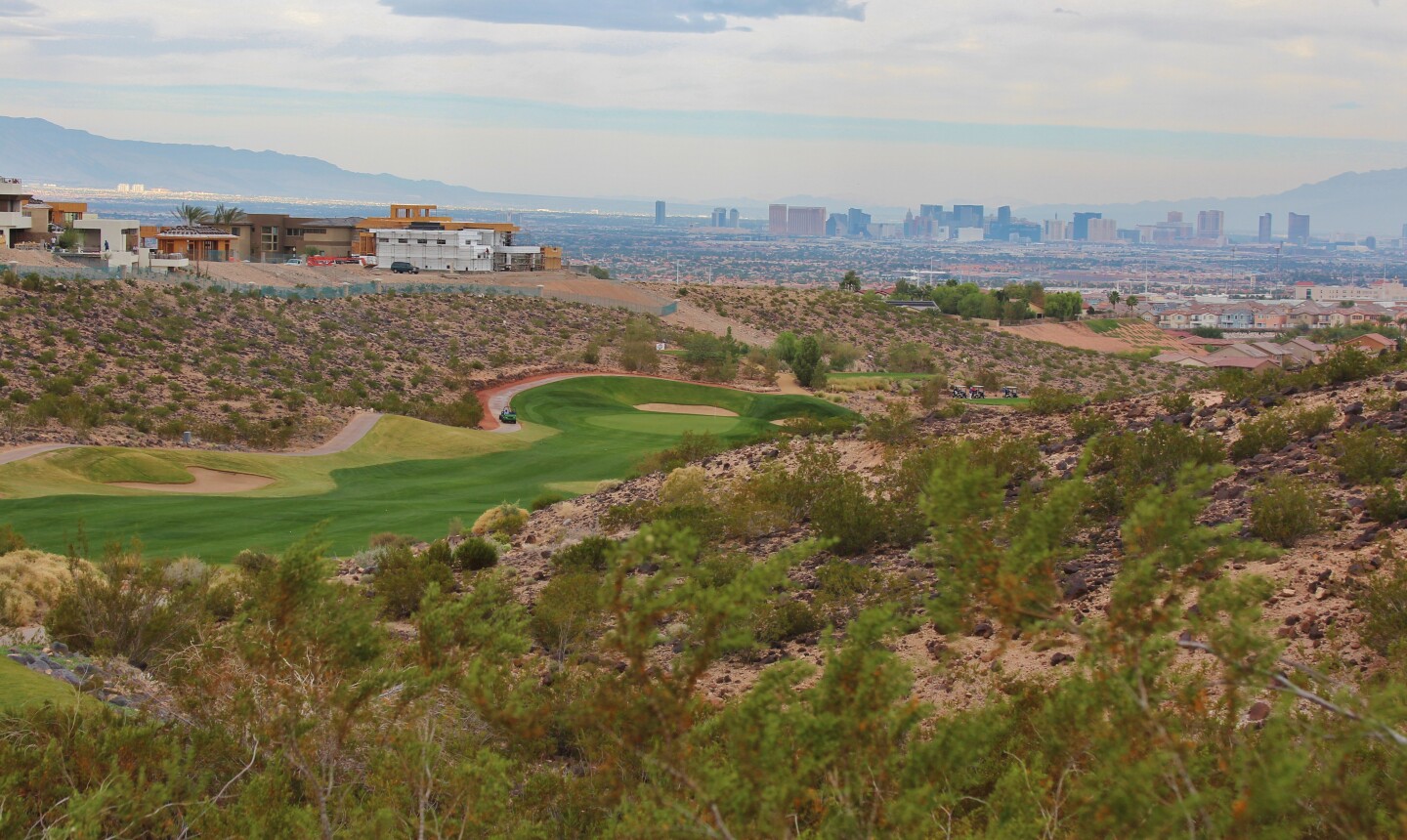 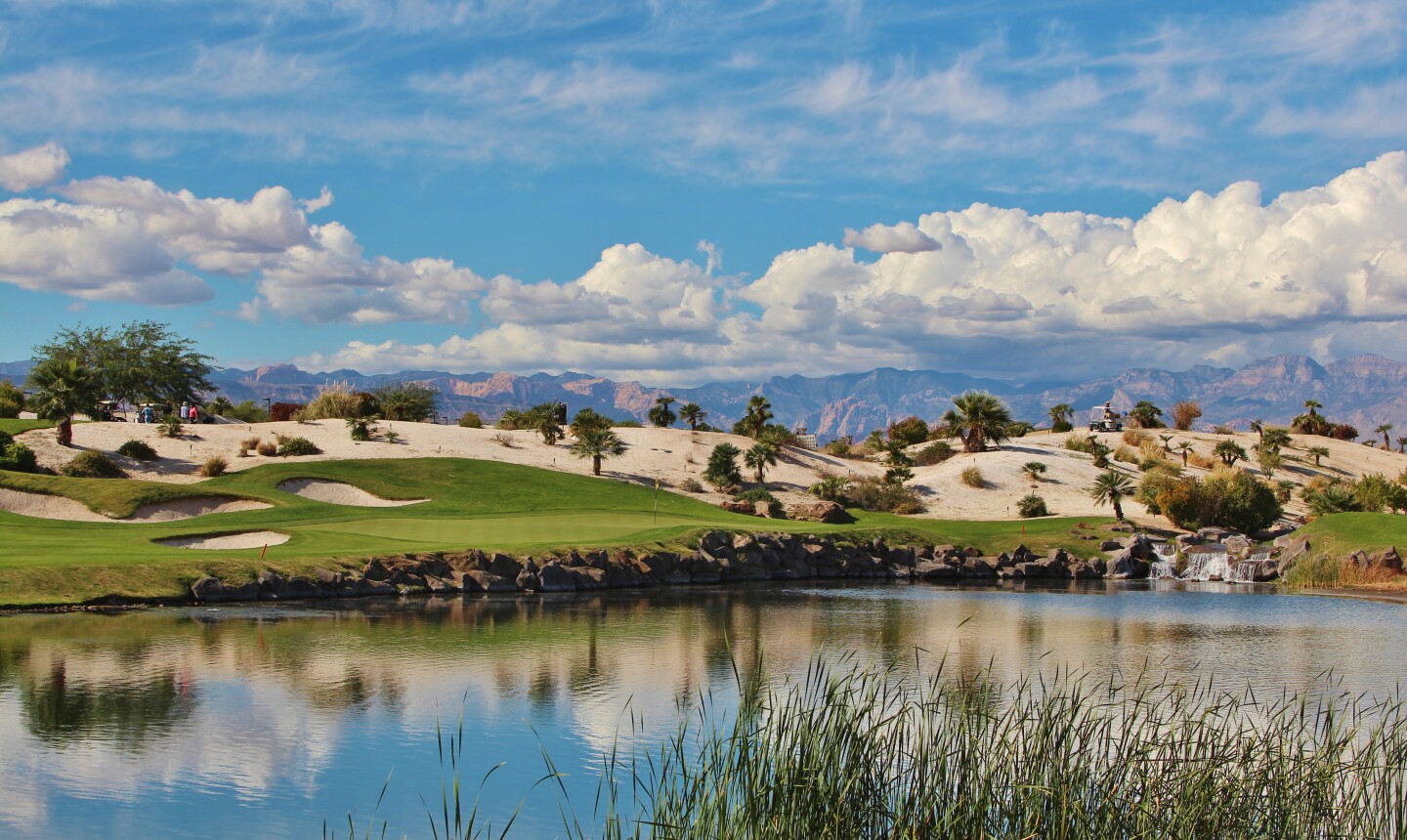 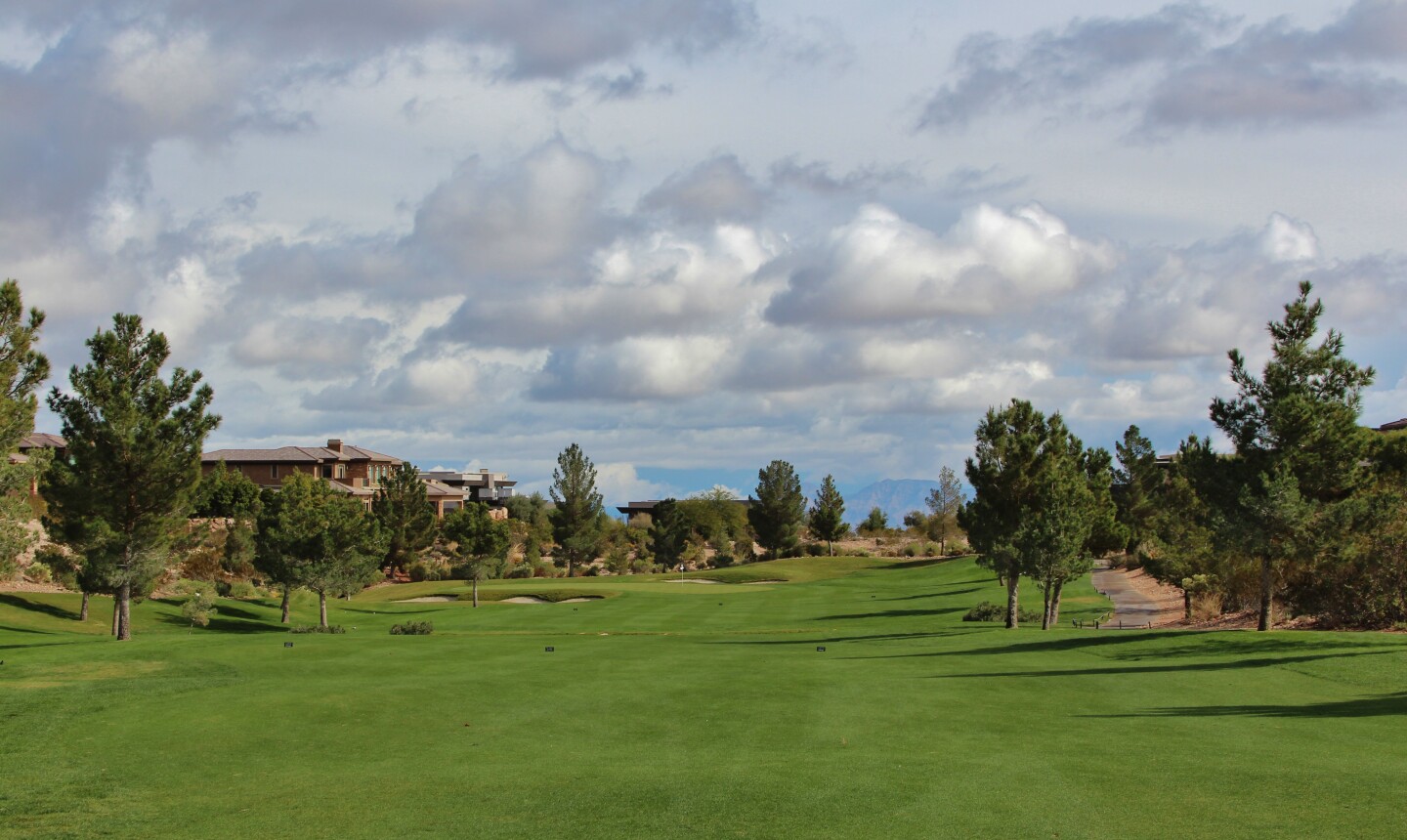 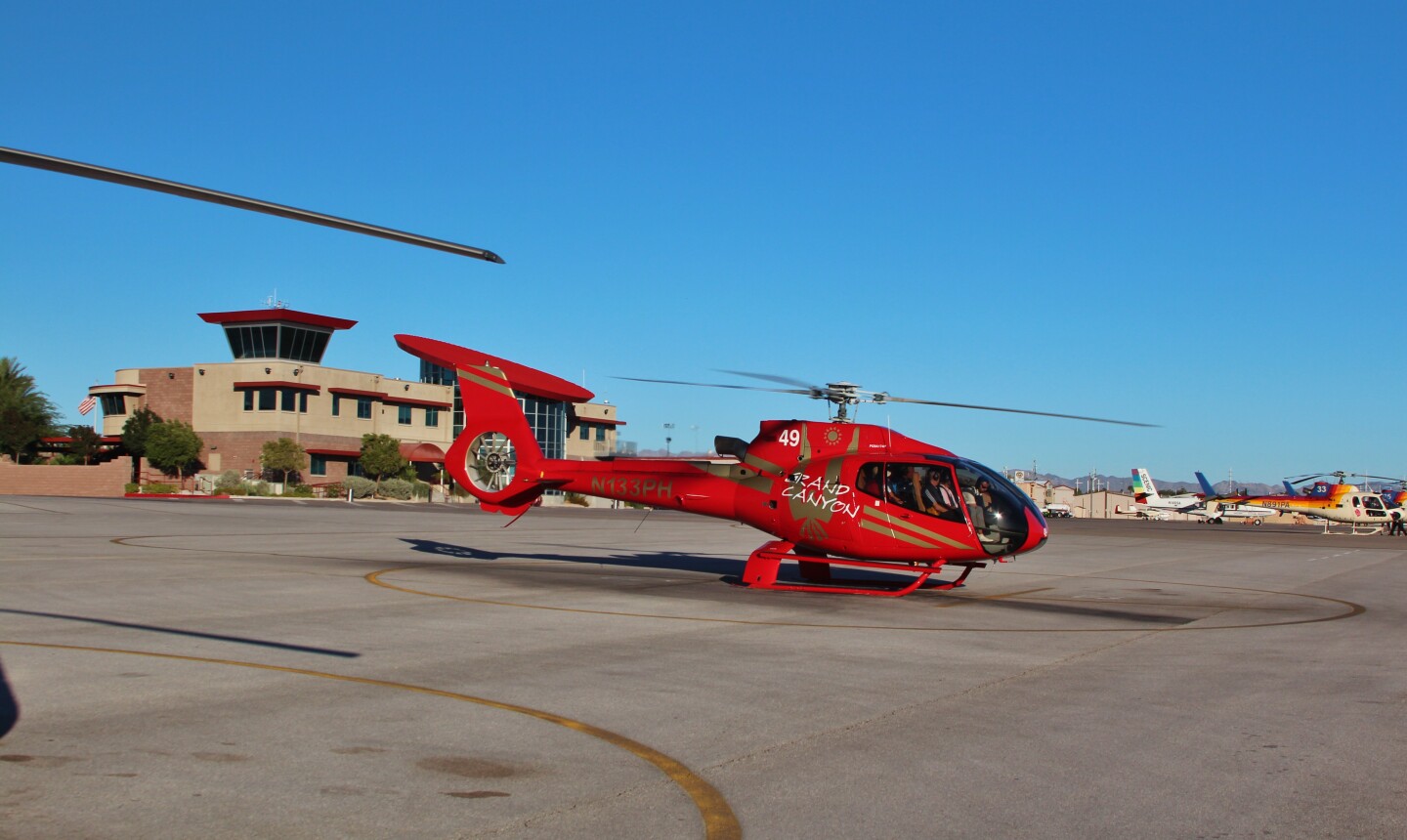 A Papillon Helicopter Tour, taking flight out of Las Vegas or Boulder City, is a stunning way to see the Grand Canyon. Jason Scott Deegan/Golf Advisor

LAS VEGAS -- I didn't need some fancy Vegas cocktail or a big jackpot to feel like I was flying high on my latest visit to Sin City.

I simply went up -- in an elevator, in a helicopter, in an observation wheel, in a golf cart. If you thought the sights were beautiful walking down Las Vegas Boulevard, just wait until you discover a bird's eye view from the places I saw.

It seems I spent more time in the air enjoying the scenery than on the ground chasing a little white ball. Both pursuits were equally compelling. That's what I love about Vegas: The golf is good (really good), but off the course, there's so much more eye candy -- the architecture and decor, the people, the neon lights -- that the game of golf becomes the side show, not the main event, like in so many other golf destinations.

Let's say you stink it up one round. Most golf trips will leave you wallowing in a beer in some nondescript resort bar surrounded by a bunch of dudes. In Sin City, daytime misery easily becomes a night to remember. The choices in Vegas are so endless -- a five-star meal, a show, gambling, a club filled with under-dressed babes -- that the fun doesn't end because you're bored, only when you fall over from exhaustion.

It was just last year that I stayed at the new Delano Las Vegas, a rebranded all-suites hotel without gaming. The Skyfall Lounge and Rivea, a restaurant serving French- and Italian-influenced cuisine from Chef Alain Ducasse, have both debuted on the top floor since then. These spaces are more in line with the Delano's relaxed, upscale vibe. The all-glass walls and balcony of Skyfall overlook the Strip 400 feet below. One star -- Bruno Mars -- recently dined in a private room of Rivea under more stars -- the lights hanging from the ceiling are arraigned as constellations.

Thankfully, the winds that picked up throughout the next afternoon weren't enough to ruin a thrilling helicopter ride over the Grand Canyon. Papillon (French for "butterfly"), an aerial touring company celebrating its 50th anniversary in 2015, operates helicopter and small plane tours out of Las Vegas and Boulder City. Our two hour-plus tour out of Boulder City flew over the Hoover Dam, Lake Mead and the Grand Canyon. The wind didn't whip up much turbulence, although it did kick up enough dust that we couldn't see the Strip. Seeing the Grand Canyon for the first time was a thrill that words can't express. If you splurge on one thing in Las Vegas, choose this. Other tours can land in the Grand Canyon for a picnic or stop at the famous skywalk.

Did you know you can tour the #GrandCanyon and soar over the #HooverDam during a #LasVegas vacation? #flyaway #BoulderCity #awesomesauce

The next night was a little less adventurous and still quite amazing -- a ride on the 550-foot-tall High Roller, the world's largest observation wheel, which opened last year. I rode it at happy hour as night fell before a magic show featuring "America's Got Talent" winner Mat Franco and dinner at Guy Fieri's Las Vegas Kitchen and Bar, both inside the LINQ Hotel & Casino. It takes about a half-hour to make a full revolution, so grab a drink and enjoy the scenery.

Oh, did I mention my corner suite for four nights was on the 54th floor, the very top of the Aria Resort & Casino Las Vegas? The high life indeed.

More views of the Strip came courtesy of Rio Secco Golf Club, a Rees Jones design in Henderson. The tallest casino towers in the backdrop seem small when you're standing on the third hole, an intimidating par 3 over a canyon, or the 11th hole, a par 4 that sweeps right off of an elevated tee. The canyons and desert of the back nine look pretty but play pretty tough. A lesson from the Butch Harmon School of Golf or a round with a T-Mate, a female caddie, takes the Rio Secco experience up a notch.

Bear's Best Las Vegas had similar commanding views of the Strip until a rare rain blew in, ending our day after 13 holes. Jack Nicklaus built copycat versions of some of his best holes at Bear's Best. I'm not a fan of the difficult first hole, but after that, it's a fun round of surprises on every tee box. One minute, you'll see the black-sand bunkers of Old Works in Montana. The next, you'll play over and around the large waste bunkers of Pamilla Golf Club in Cabo San Lucas, Mexico. The back nine climbs toward the mountains -- where you'll see some of the most amazing homes -- before a difficult finish.

A photo posted by Jason Scott Deegan (@jasondeegangolfadvisor) on Nov 3, 2015 at 5:48pm PST

Speaking of food, there was plenty of it along the journey. My first taste of chicken and waffles came at the Yardbird at The Venetian. I can't say I'll go that route again, but the chicken as a stand-alone dish was as good as it gets. For more Southern comfort food, the shrimp and grits, man oh man, were too good. Guy Fieri's brisket hit the spot, too: juicy, sweet and tender.

The last supper was perhaps my favorite meal -- a perfect strip steak and lobster at the Triple George Grill at the Downtown Grand Las Vegas, followed by cocktails and cigars at Andre's Cigar & Cognac Lounge inside the Monte Carlo Las Vegas Hotel & Casino. Since four days of excess in Sin City is about all my body can handle, I might as well count my flight home as a final high note on a trip filled with them.

#Vegas the #foodporn capital of the universe #yum #drinkin

A photo posted by Jason Scott Deegan (@jasondeegangolfadvisor) on Nov 5, 2015 at 8:58am PST

Kira K. Dixon
Lifestyle Correspondent
Now Reading
Trip Dispatch: Flying high on the golf course and off in Las Vegas
New Cookie Policy
WE AND OUR PARTNERS USE COOKIES ON THIS SITE TO IMPROVE OUR SERVICE, PERFORM ANALYTICS, PERSONALIZE ADVERTISING, MEASURE ADVERTISING PERFORMANCE, AND REMEMBER WEBSITE PREFERENCES. BY USING THE SITE, YOU CONSENT TO THESE COOKIES. FOR MORE INFORMATION ON COOKIES INCLUDING HOW TO MANAGE YOUR CONSENT VISIT OUR COOKIE POLICY.
CONTINUE
Search Near Me