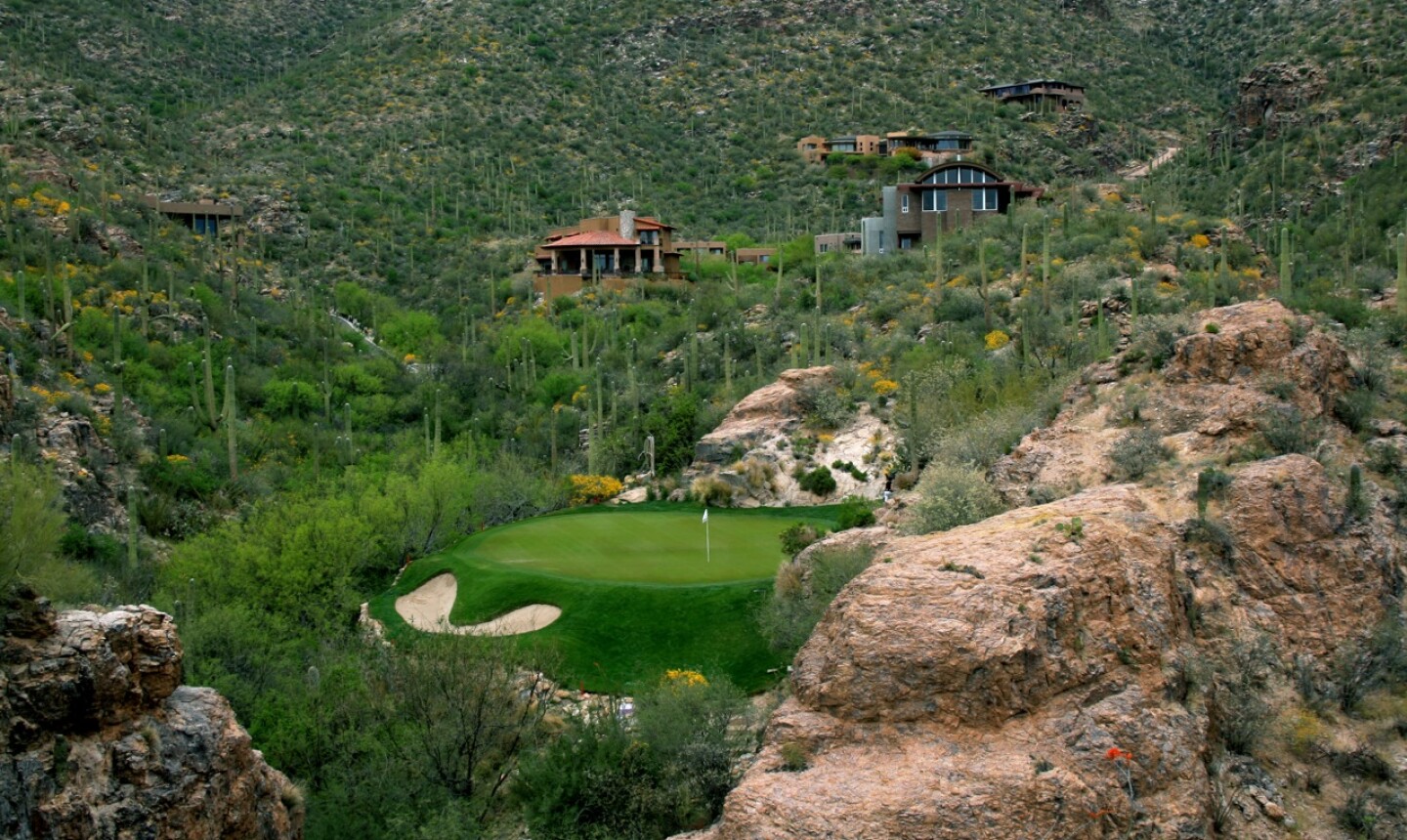 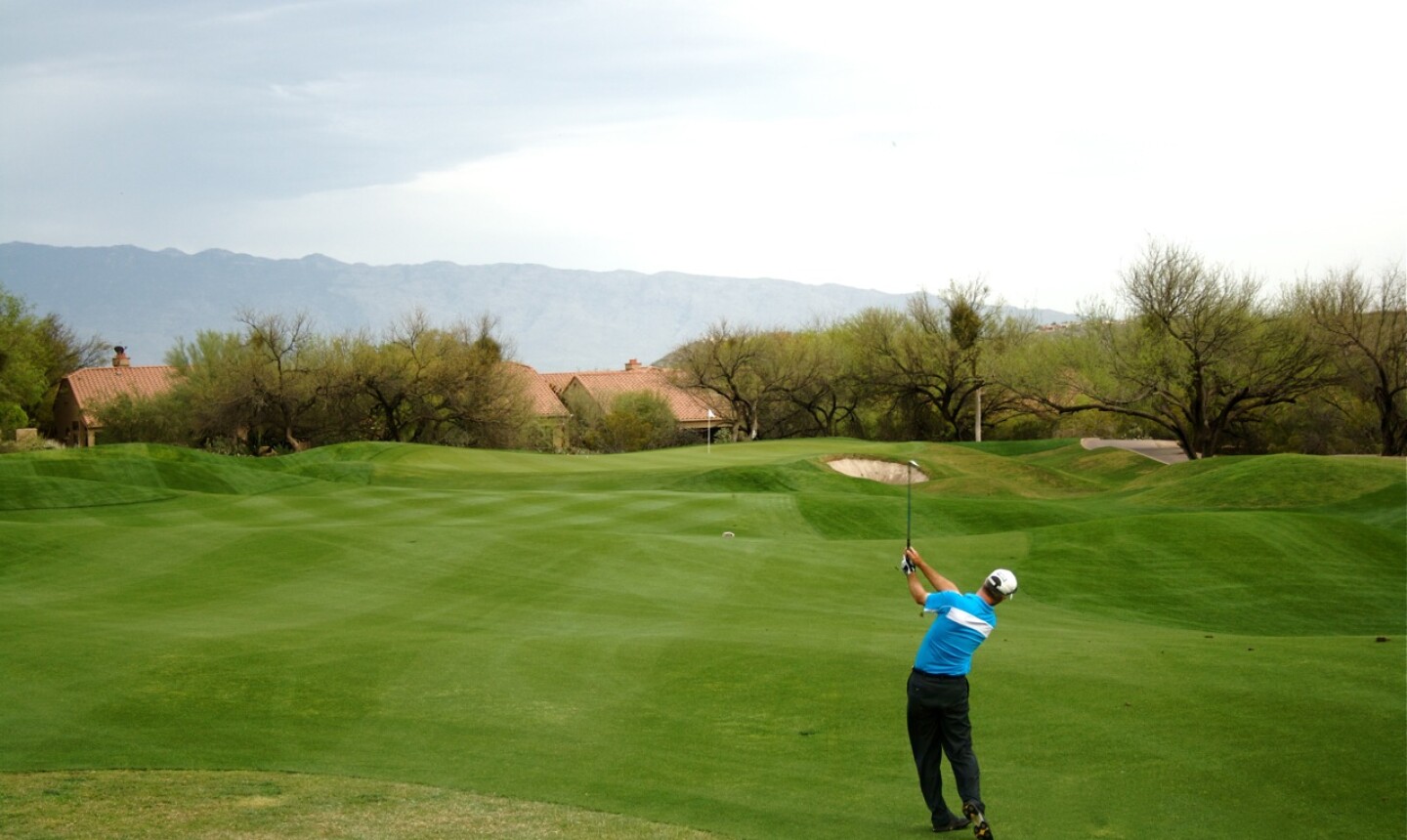 TUCSON, Ariz. -- Is there a more famous par 3 in the desert southwest than the third hole on the Mountain course at Ventana Canyon Golf & Racquet Club?

Perhaps the case could be made for the 16th on the TPC Scottsdale Stadium course. But when that hole doesn't have 15,000 rowdy PGA Tour fans surrounding it, it's got nothing on Tom Fazio's desert masterpiece.

Playing from a tiny elevated tee so small it can barely accommodate your entire foursome at once, the third hole on the Mountain course plays just more than 100 yards to a tiny green tucked within boulders. With your buddies just steps away from you as well as all the visual trouble, it's as distracting a wedge shot as you'll ever hit.

The third hole is certainly a showstopper and a tipping point when many visiting golfers consider where to book their Tucson tee times. The city has a slew of worthy upscale resort courses such as the Ritz-Carlton Dove Mountain, Starr Pass and Westin's La Paloma Country Club. Ventana Canyon's Mountain and Canyon courses, which opened in early 1984, still hold their own just fine in the crowded southern Arizona golf scene.

The 36-hole Ventana Canyon Golf & Racquet Club has a lot of similarities to the 27-hole La Paloma Country Club. Both are private golf clubs that operate separately compared to the larger resorts and accommodate visitor play. Ventana Canyon, however, doesn't require you to stay at the smaller Lodge at Ventana Canyon or the 398-room Loews Ventana Canyon Resort for a tee time.

When the Ventana Canyon resort and residential development was planned, the idea was to make the homes set along the foothills blend into the mountainside by using on-site materials and design plans intended to fit within the landscape. Many holes have homes on them, but you can barely see them because they're tucked away in such lush grounds. This is the desert, sure, but these parts of the foothills are lush with vegetation. Guests of the Loews Ventana Canyon even go on desert nature walks up the mountain, right on the property.

The private golf club is attached to the Loews Ventana Canyon Resort and the Lodge at Ventana Canyon, a smaller hotel originally intended for the club's snowbird membership. The golf club's Canyon and Mountain courses rotate between which is available to the public daily, so factor that in when deciding which of the courses you want to play. The Mountain is on the wish list of so many visiting golfers who have seen pictures of it or heard of hole-in-one tales from their buddies who have experienced it.

But Ventana Canyon Golf & Racquet Club's Canyon Course is a Fazio-designed gem in its own right, and some members will agree that it's the more complete of the two courses. The Canyon course is set a little lower than the Mountain course. The front side of the Canyon course winds down Esperro Canyon, which during monsoon season features water rushing through desert washes. On the back side, Whaleback Rock is the featured landmark.

The Mountain Course at Ventana Canyon -- despite the showy third and a handful of other elevated tees such as the fourth and 18th -- is a more subtle course, with fairways rippling up and down the foothills and demanding accurate tee shots and savvy wedge play. The greens are tough to read, but it's a safe bet to factor in the mountains when lining them up.

After golf, head up to the Flying V Bar & Grill, which is a great spot to catch the sunset and enjoy southwestern cuisine. The most popular appetizer (that caused a mass uprising when it was briefly taken off the menu) is the table side guacamole, which is made by a waitress right in front of you and specified to your choosing of ingredients and spice.

With any hope, someone in your group will be picking up the drinks after triumph at the third hole.