Will bunker rakes go away for good?

Bunker rakes, we're not 100% sure when they became a fixture on golf courses around the world, but just about every course, no matter the class, has scores, if not 100s of them, scattered within or around their course's many bunkers.

As golf courses adjust operations for a more socially-distant and less germy future, we're going to see a lot of changes this year, and some may stick permanently. I recently interviewed Brady Wilson, the general manager at Ak-Chin Southern Dunes, one of the top Troon-managed golf courses in Phoenix-Scottsdale. Their Australian Sandbelt-inspired design is full of big, heavily crafted bunkers, over 400,000-square-feet of sand in total. For a mostly flat and featureless site compared to some of the more geographically remarkable desert courses in the area like Troon North or We-Ko-Pa, the sculpting and upkeep of the bunkers is really the standout cosmetic feature of the experience.

Expectations for conditioning in this upscale golf market, especially in the winter and spring, are sky high. Nevertheless, staff at Ak-Chin Southern Dunes have removed rakes for COVID-19 safety, and Wilson says, at this time, they are considering leaving them in the shed moving forward.

"Pace of play is faster, our superintendent loves not having to move them around," said Wilson (his full interview is in the embedded video above). "I don't know if bunker rakes make that big of a difference. Obviously for championship play you probably need to have them.

"On a day-to-day basis, you have a local rule you can get relief from a bad lie in the bunker and still play in that same bunker no closer to the hole, I don't see why that would affect posting a score or mild competition at the club."

I see reviews every week here at Golf Advisor coming from golfers upset that they were in a trap that hadn't been raked by a previous golfer. Fixing divots and pitch marks are an essential task for golfers and critical to the enjoyment of all players. But is raking your footsteps in a trap similarly necessary?

In the handful of rounds I've played at municipal and lower-end courses around home this spring during COVID-19 modifications, I've encountered some bunkers that are scruffier than they used to be. Some grass is growing around the edges, and in a round I played a day after heavy rainfall, I had to move my ball out of standing water in the center of one and give myself a decent lie on the peripheral of the trap where it wasn't sopping wet. The sand was still pretty packed in and wet. I actually hit a decent shot to 5 feet but missed the par save.

The traps I've seen this spring have generally been maintained to lesser standards. But I can't say that my enjoyment of the round was affected. In some ways, not having a perfect lie in a bunker has made me less tense over the shot. My expectations are a little lowered. And when I hit a good shot out of a bad lie, I feel a greater sense of accomplishment.

And I must admit I am enjoying the sensation of being able to hit a bunker splash and just stroll right out of it without any additional chores.

Would you care if your home course took bunker rakes away forever? Let me know in the comments below! 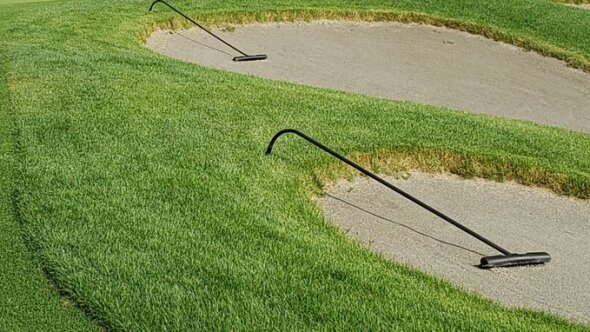 Articles
7 Min Read
A place for rakes
Placed improperly, they can lead to rulings issues or be unfair to following golfers. Are you putting rakes back in the right place?

Brandon Tucker
Brandon Tucker is the Sr. Managing Editor for GolfPass and was the founding editor of Golf Advisor in 2014, he was the managing editor for Golf Channel Digital's Courses & Travel. To date, his golf travels have taken him to over two dozen countries and nearly 600 golf courses worldwide. While he's played some of the most prestigious courses in the world, Tucker's favorite way to play the game is on a great muni in under three hours. Follow Brandon on Twitter at @BrandonTucker and on Instagram at @btuck34.
115 Comments

Interesting debate. It all starts with what the starting point is how the bunker is built, ease to get in and out, depth of sand etc. If sand base is firm not deep sand as on links courses in Scotland smoothing is easy, you rarely get a foot print. If sand is deep dragged up the faces it becomes and issue to smooth prints even if you have a rake. Size can be key I have experienced bunkers where elephants go to die raking those is a pain!
Remember nobody runs out and throws a bunker in your balls path it is there before you hit the ball!
I suggest a rake in each bag light weight one replaces a club or two or the ball scopper!

My group is not missing the rakes at all. I agree with those who have said, after a sand shot smooth the sand with your feet and move on. Local rules can be adjusted to allow the ball to be moved if it lands in a footprint. Anything to help speed play is a plus.

Bunkers are hazards and I would be fine with play it as it lays. The tour pros would throw is hissy fit about this as they are used to perfect fairways, greens and bunkers.

Good riddance! Kick the sand with your feet to make it as good as if it had been raked!
Let’s move on!!

Let's put the rakes back please! The CDC has revised (again) their guidelines that indicate the Covid virus isn't as easily transmittable from surfaces as originally thought. Raking traps should be as basic as replacing divots and repairing ball marks. Let's not completely bastardize the game because of Covid . . . .

I think it's ridiculous not to allow rakes on the course. The admittedly ever-changing "science" indicates the virus (1) is not contracted by touching surfaces and (2) that the virus does not survive outdoors. As infrequently as any individual rake on a golf course is touched, I see NO safety concern from leaving rakes on the course. Let's go back to the rules of golf, and let golfers repair bunkers on the rare occasion they hit into them. The slow play I'm seeing is not from people raking bunkers but, rather, from golfers learning the game who take a ton of strokes or golfers who insist on playing tees that aren't appropriate for their skills.

In the discussion above the operative word I believe is obviously when referring to a Championship. Pro's are the best players in the world and if unranked bunkers causes their scores to rise so be it. If rakes disappear for normal players who struggle in bunkers then for sure they should disappear for everybody on every course.

I think there should be one rake cart. Stays with the cart always. After the round the rake is checked by the starter before player(s) leave the course and are charged for any damage to the rake.

Having rakes is not all that important...if, the grounds crew make a rotation of raking them as they mow greens each morning and another rotation after lunch.

bring your own light weight rake

Tim Gavrich
Senior Writer
Now Reading
Will bunker rakes go away for good?
Search Near Me