Gillette Ridge Golf Club in Bloomfield, just outside of Hartford, is an Arnold Palmer Signature course. It is one of the toughest rounds in all of New England. The course sprawls across a beautiful landscape covered with natural wetlands and forests of towering maples, oaks, and elm trees. There are strategically placed bunkers in addition to the natural challenges but they are not excessive. The wetlands come into play on almost half of the holes at Gillette Ridge Golf Club. The approaches to the greens are seemingly intimidating but as long as you don't hit short there is always bailout area on one side. Since each hole presents a unique challenge, there is not just one signature hole, but one of the most memorable holes is the par-5 second, a true risk-reward test that requires both length and accuracy.

The 19th Hole is Great For:
Drinks 29
Patio Dining 22
19th Hole Scenic Views 9
Course Challenges Include:
Forced Carries 46
Water Hazards 42
Bunkers 38
This course/club is great for:
Advanced Golfers 42
Wildlife/ Scenic Views 28
Locals 18
This Course's Location is:
Convenient to the City 38
In the 'Burbs 27
Worth the Drive 25

I haven't played here in over 5 years because the course was in horrible shape last time I played. Additionally, my electric cart ran out of charge on the second hole! The greens were rolling nicely. today but still no sand in the bunkers, no divot repair mix, no ball washers. Probably won't return.

The course itself was in descent shape but the sand traps were in horrible shape., filled with ruts and little sand. I played this course earlier in the year and the fairways and traps were excellent. I believe the heavy rains we had this summer have contributed to the decline in conditions, but it would have take very little to at least rake out the traps to make them playable.

One of the best in CT

Always challenging and playing the hybrid tees adds to the enjoyment. My favorite course and I have to drive over 50 minutes to get there.

I first played the course about 7 years ago. The old front nine is now the back nine and the old back nine is now the front. I liked that change. I found holes 7 through 9 to be very difficult. I found some holes on the back nine to be moderately challenging. The greens were in very good shape. The only bad part of the course were the sand bunkers. They were completely washed out from a recent storm. They need some major attention. Overall, the course was fun to play. One needs to be accurate with tee and approach shots. The course is not very forgiving to those who occasionally spray the ball.

You get to use all your clubs, long course and a great value for the buck.

The Bunkers were in horrible shape. You couldn't play out of them. Most had exposed rocks and it looked like someone drove a car through them.

Carts are a mess and outdated… rips in the seats.
The bunkers totally washed out. I normally love the course but kinda embarrassing this time around.

Enjoyed everything about playing there except both times I have played there it was early Saturday afternoon and it was on the slow side.
To be expected I guess.

First time here. Nice course layout but it looks like they’ve just given up on all the bunkers. No sand, just dirt. Unplayable.

Fun and challenging holes. Tons of potential. Horrible maintenance - divots everywhere. Greens, fairways, traps, tee boxes, cart paths not well-maintained by any stretch. Wouldn’t be as big of a deal if the price was right but they’re charging as if they’re on of the best in CT and they simply are not.

Although Gillette Ridge sits less than a quarter mile from the Hartford city limits, driving into the parking lot here relaxed me immediately. The beautiful clubhouse and course itself, along with almost all that surrounds it, generates that same tranquil feel. Actually playing the layout, however, may not be so calming--as you may well guess, given that its chief designer was the great Arnold Palmer.

Given a course slope of 133 from the blues (not even the deepest tees) the upcoming challenge seemed self-evident. And that was borne out in the playing of it. As it turned out, I had only a couple of teeth-gnashing moments (on two and thirteen) and was happy with my round overall. Unlike most layouts, I found this one hard to accurately gauge after a first play. I still think the course is excellent, but want to get back here soon for another go at it.

A couple of things struck me immediately here. First is the quality of the solid, straightforward driving test around these eighteen, which seems apt, given that Palmer was one of the greatest drivers in the history of the game. There are no tricks and no stupid holes (forgive my bluntness). Palmer uses bunkers without malice here; their main function is to penalize truly bad shots. And while that may not make this a highly strategic design, I have no quarrel with the philosophy implicit in these carefully shaped driving zones, which are often on the wider side. The second Gillette strength is as a great test of chipping, primarily because the chipping (and sometimes pitching) areas are well contoured and defined, large, and interesting.

There are also features that make Gillette unusual and tough, with qualities departing from almost any courses I’ve played in terms of their frequency of use by the architects. The first are the green shapes, which almost all --save for a couple on the back side--stick to narrow or L-shaped or other slender figures: the key point is that they depart strongly from traditional circular, nearly round, kidney, or egg-shaped types. The net effect is that the greens here are quite hard to hit. Since most are also elevated or pitched above grade with falloffs, you’ll need a good pitching game, along with your solid iron game, to succeed here. The second problem--and this may affect your score as much--are forced carries into several greens. These appear at 7, 9, 14, and 16, where brooks, a pond, and a waste area must be traversed. The harshest of these may be at fourteen, on which a tall stone wall fronts the green and will slap your ball into the brook if you’re short by even a small margin. If that’s not enough, these same four green complexes have further defenses in the form of hazards (notably big bunkers) or large greenside slopes.

The strength of this golf course lies in the par-4’s. Here are the best ones (yardage given from blue tees):

One, 407: Dogleg left favors a draw off the tee, though you’ll have to avoid the big, multi-lobed bunker lurking left. The green is narrow and long and sided leftward by another sprawling bunker.

Seven, 409: Probably the best of the forced-carry holes, the hole plays straightaway to a rolling landing zone without trouble. But the second over the brushy pit must be a strong one--or else. A bunker fronts the green.

Twelve, 380. Driving zone features two bunkers on left and mounding, longer on right. Approach shot will plunge downhill to a green backed by water. Land short or right and you’ll be working very hard for an up-and-down.

Eighteen, 424: Power and accuracy off the tee will help your cause at this closer, yet a big bunker lurking on the left must be avoided. The approach may be rolled onto the green if you’re careful enough, but overshooting this putting surface means trouble.

I’ve omitted the ninth because I’m not sure how I feel about the hole after this, my first play. Let’s just say that architects Palmer and Ed Seay nearly out-Dye Dye on this one.

The par-threes play decently enough at Gillette, though as a group they’re unspectacular. My first feeling about the second hole was dislike--it seems far too angular and fussy, not to mention penal--but the seventeenth is an outstanding hole, its green oblique to the tee and possibly a very long two-putt.

The par-5’s work well, overall. The two I enjoyed playing most were the third, a dogleg-left that rolls beautifully from tee to green (and around it), and the eighth, which can be a two-shooter for those who strike it hard and precisely on drive and approach. I didn’t take to the eleventh. It is, at least, a good driving hole.

Conditions: Almost everything ranged from good to excellent, with the tees and greenside areas (grass surfaces) standing out. Roughs were good. The greens themselves were good and rolled smoothly enough, yet seemed slightly beat up from heavy play. The bunkers were poor because they were washed out; only a few that I observed were even raked. This is consistent with what a few GA reviewers wrote about earlier this month. They need strong restoration and reconditioning.

Service/Playing Experience:
It was nice meeting Chuck, the starter, who was attentive, personable, and helpful in all respects. The staffer at check-in, a young lady, was polite and also friendly. Another good experience was had with playing partners as well; two of them are in the photo of hole eleven. A twosome several groups ahead of us (apparently) made the back nine torturous, though: five hour round.

Some Conclusions:
Though Gillette Ridge can be excruciatingly tough, it was still interesting to play, almost throughout. It’s not a course for the faint-hearted, and some real course knowledge is essential. It’s a fitting challenge for most golfers, particularly as a driving test. Still, the bunkers should be of serious concern for the groundskeeping staff: there can’t be 45 key hazards basically out of commission if we expect G.R. to play as Mr. Palmer intended.

u6377833
Played On 08/26/2021
Reviews 3
Skill Intermediate
Plays Once a month
I Recommend This Course
5.0
Verified Purchaser
Previously Played

Great course for all level of players

Always a good challenge for your game. Course plays so different from all tee positions. Greens roll well and at a quick pace. We played a few days after tropical storm Henri and the course drained well. Bunkers were still in tough shape but from previous rounds they’re always kept well. 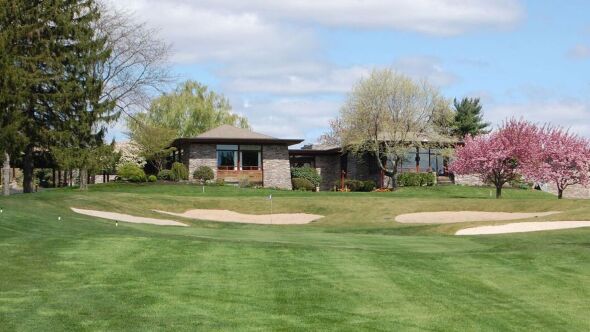 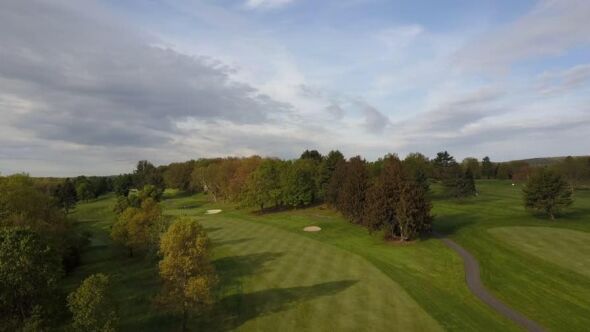 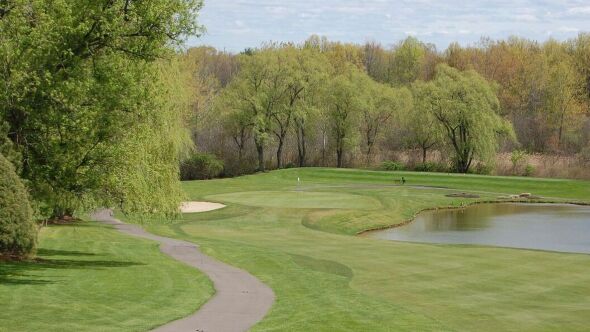 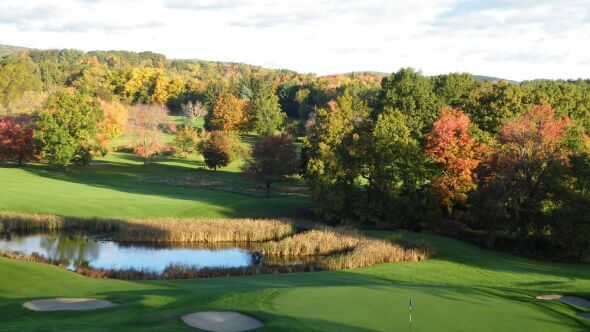 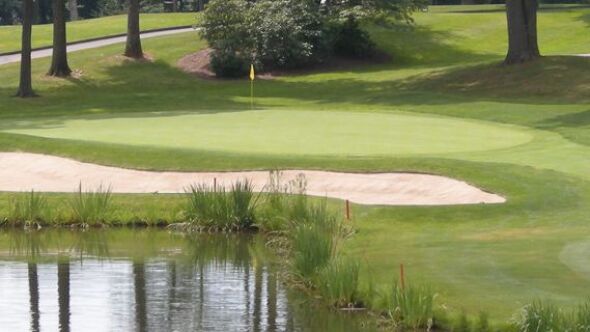 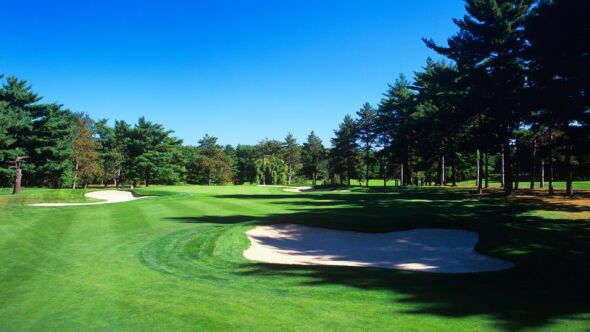 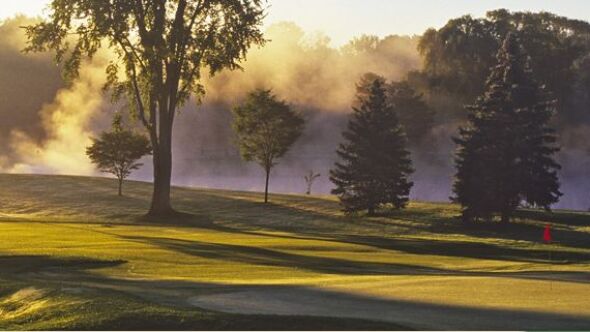 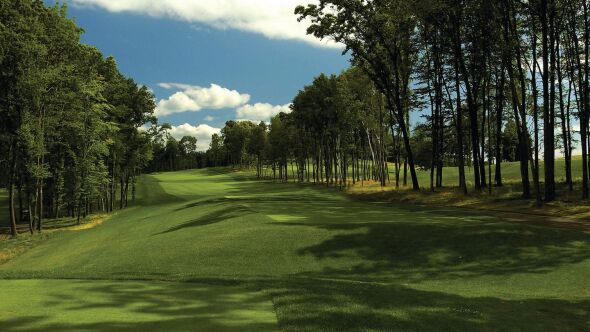 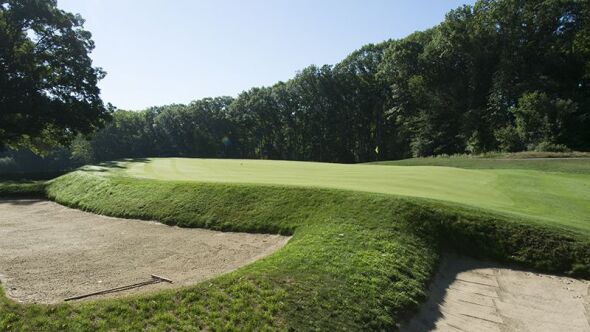 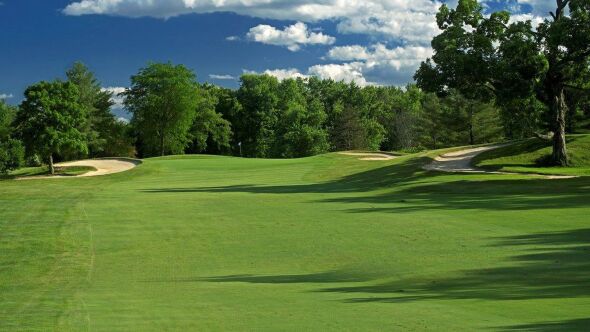 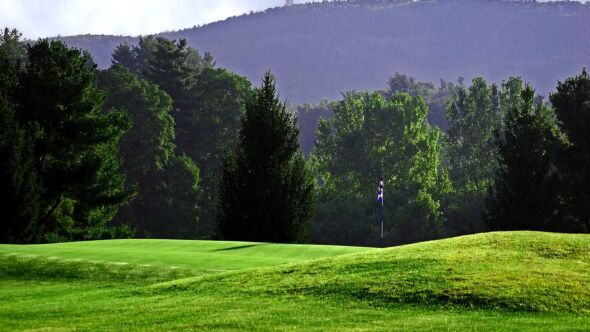 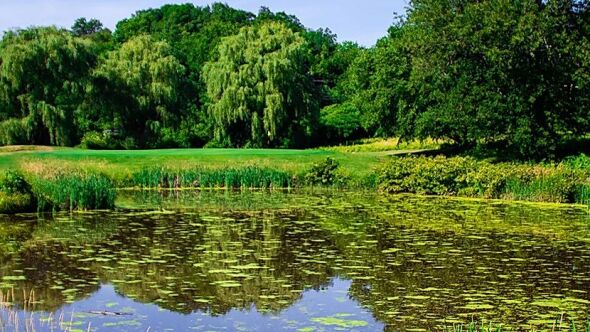 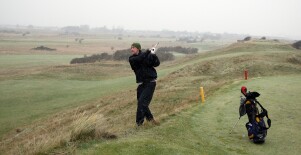 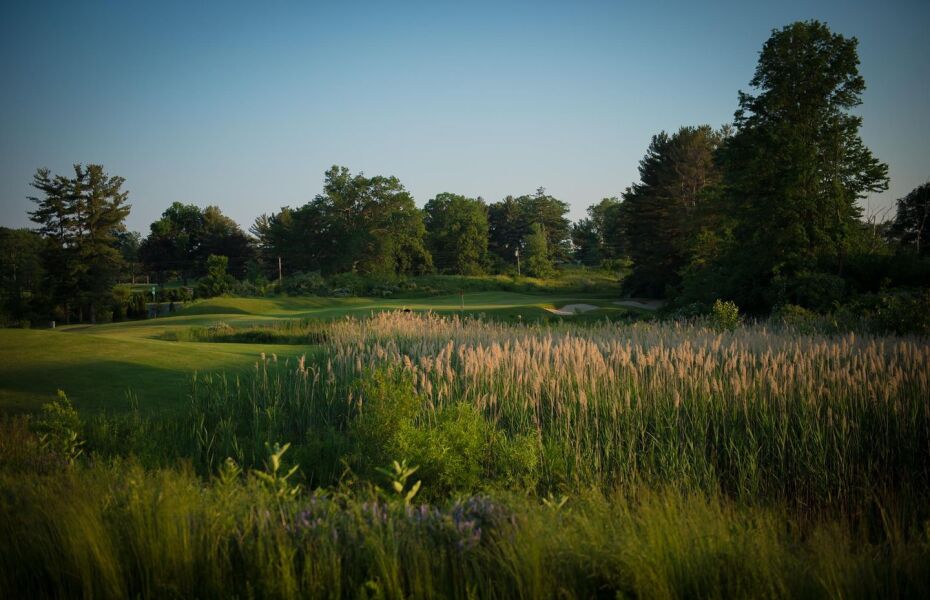 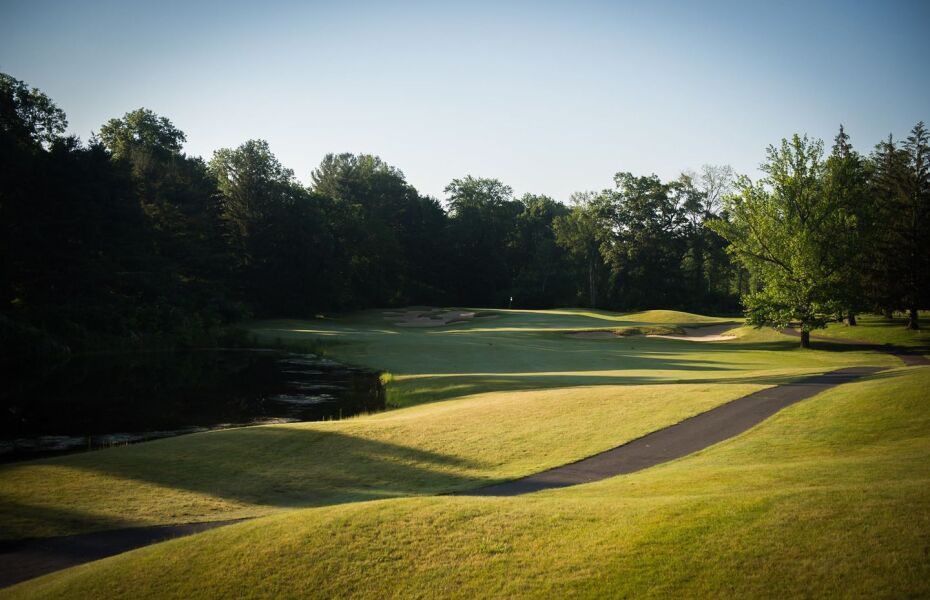 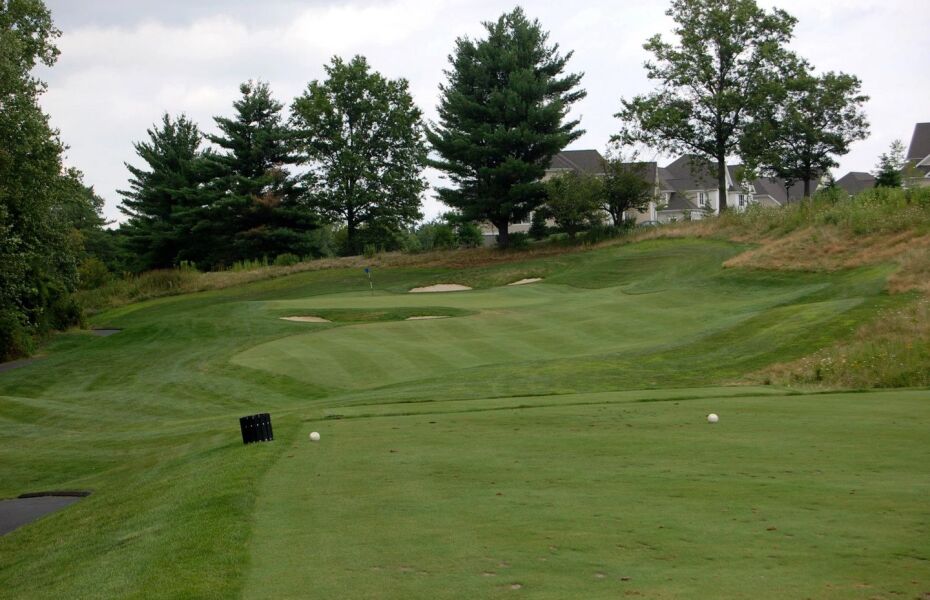 A view from the 4th tee at Gillette Ridge 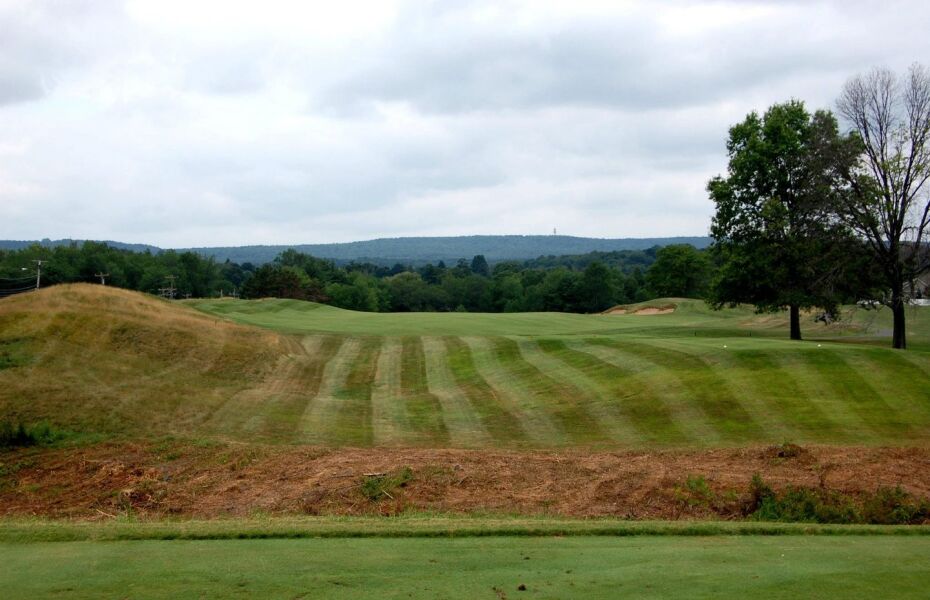