Salish Cliffs Golf Club, part of the Little Creek Casino & Resort, is located 20 minutes from Olympia and is just a little over an hour from Seattle. When the course opened in 2011, it was named "Best New Course" by both Golfweek and GOLF Magazine. The dramatic landscape of the course travels up and down over 600 feet of hillside, providing panoramic views of Kamilche Valley. The golf course is covered in bentgrass turf more frequently found in tropical climate, but that is just one of Salish Cliffs' many unique amenities. Each hole offers a unique challenge. Though the fairways and large greens roll true, accuracy is essential or you'll be severely penalized for missing them. The course finishes on a positive note with an opportunity for a birdie if you favor the left side all the way.

The 19th Hole is Great For:
Drinks 23
Patio Dining 16
Brunch 13
Course Challenges Include:
Elevation Changes 43
Bunkers 38
Thick Rough 29
This course/club is great for:
Advanced Golfers 38
A Weekend Splurge 34
Wildlife/ Scenic Views 26
This Course's Location is:
Worth the Drive 43
At a Resort 26

If you want to play...go in May- August.

My 3rd time playing here, it’s a very challenging layout but the upkeep of fairways and greens are top notch. Difficult course to score well but the lushness is something not seen much on a public layout. Great course, too bad I’m not a low handicap golfer if I was I would come to play here more often.

Foursome ahead of us acted like they were PGA pro's (not!.) THE most aggravating part is that they were playing two balls each. After I had mentioned this to the marshall they stopped but then decided to play incredibly slow. A great 6 hour round thanks to the guys with matching shirts that are not that good. Watched one of them throw and iron across the fairway and yell and scream like a child throwing a fit. Very unimpressive.

Played thursday the 11th of Aug. Only real issue is you cannot hit range balls until 20 min from your tee time. So rush rush and you need atleast 5 minutes to drive to the first tee so do the math. No chipping green until by the first tee. Wasn't told about it so no chipping before the round. Got to the course an hr and a half early to really warm up, but didn't happen. No starter either like there used to be. Over watered around several sprinklers so actually a few mud spots as well as many spongy tee blocks. Great layout and greens though. Overall course is a 4+.

One of the best in WA

I have played Salish many times and always enjoy. Course is in fabulous condition and the layout is challenging but fun. Every hole is different. Staff is super friendly and course is a great value.

Took some guests from Hawaii, they are all enjoyed. We didn’t arrive early enough time to hit some balls. Overall it was a good value. Definitely returning back before season end.

The fairways we're like hitting out of a swamp and it was cart paths only. The course doesn't allow you to bring your own push carts. I will never waste my money at this course again. The pace of play was horrendous and it took 5 hours with no marshal anywhere on the course to be seen.

Soggy conditions but worth playing

The course was soggy and cart path only. But considering all the rain that we have had here, it was in better shape than i had thought it would be.
Only con is that the cart gps system stopped working on hole 5 and didnt start working again until 16. Since it was cart path only, getting distances on the course was a little difficult.

Nice course an facility, but it was really wet, and greens were really slow.

Took advantage of discounted rates. This course is fabulous. Tucked away in the hills

One of my favorite WA courses

Great course with a fun layout. Every hole is unique. We played winter rules obviously due to wet conditions, and it was wet!! I expected course to be little drier given the elevation.
Staff is always super helpful and friendly.

I played with a couple of friends from our group, as we were attracted by the winter rates for green fees. The staff was very friendly when we checked in, but was adamant that we must keep the carts on the path as the course was wet and we could tear up the turf if we got off the concrete cart paths. The course was one of the wettest I've ever played, even on the holes that were the highest in elevation. I was wearing winter golf boots and almost had one sucked off my foot a few times while walking to my ball. The course played at least 30% longer than listed on the card due to the wet conditions. The greens were o.k., but their speeds were inconsistent. We may try this course again in the summer, but never again in the wet season. As a last comment, we were quite religious about staying on the cart paths, but about every third hole, our carts would shut down and the touch screen would tell us that we were in a forbidden area. After a few seconds, the cart would be restarted and we could continue. We never left the paths.

You can tell that the course is beautiful but yesterday was not the day to enjoy the course. The fog was so bad that every shot was a blind shot until you were near the green. The course was so wet that going from cart to ball was excruciating as my feet went so far into the mud that it reached my ankles. Hitting was like soggy and super difficult. I will go back once conditions are dry and fog less as you can tell that the course would be a beautiful and satisfying experience. I just hate that yesterday was my first experience, especially after driving for about 1hr to play. 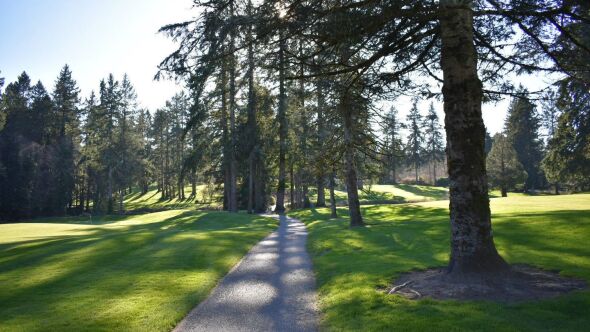 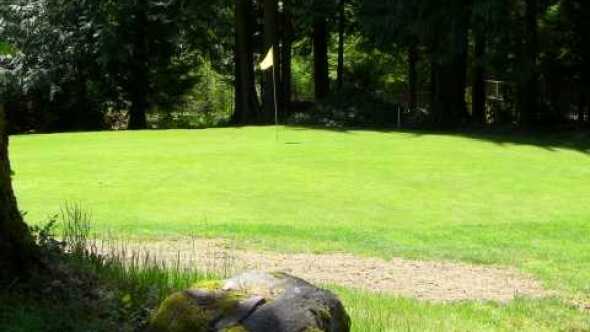 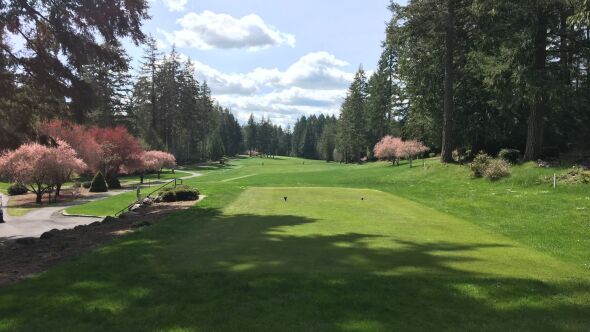 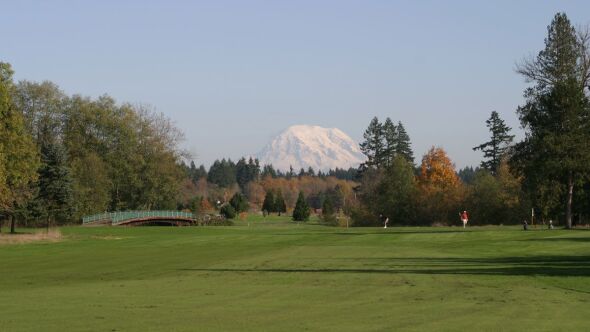 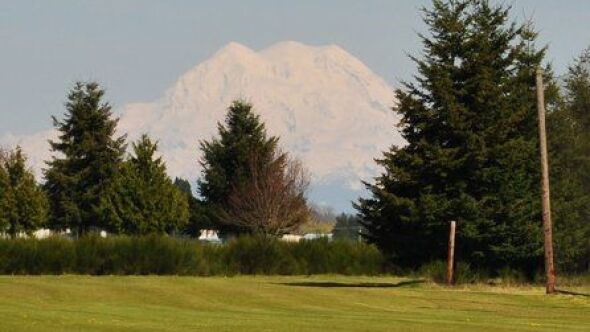 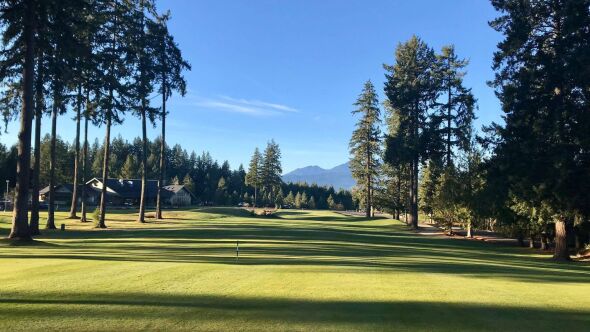 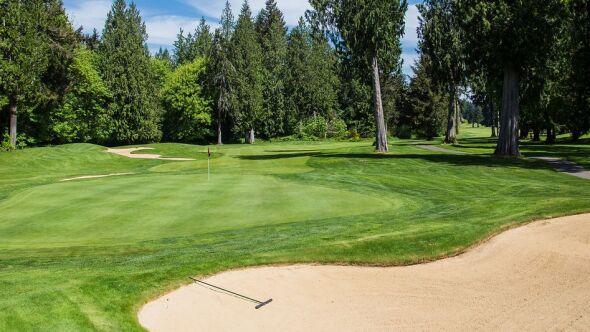 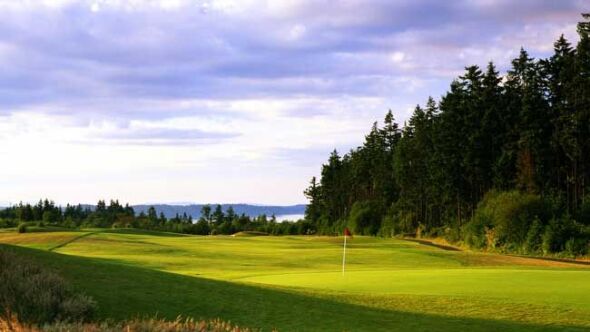 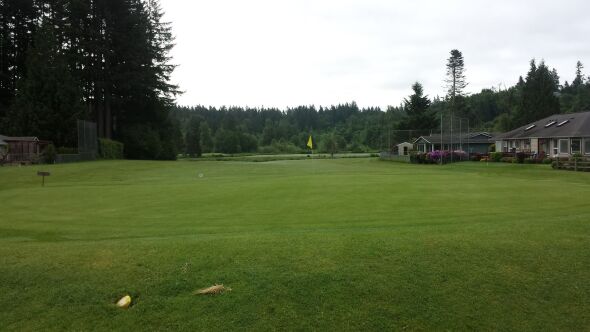 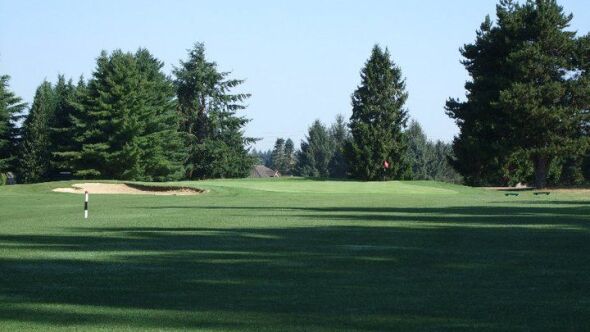 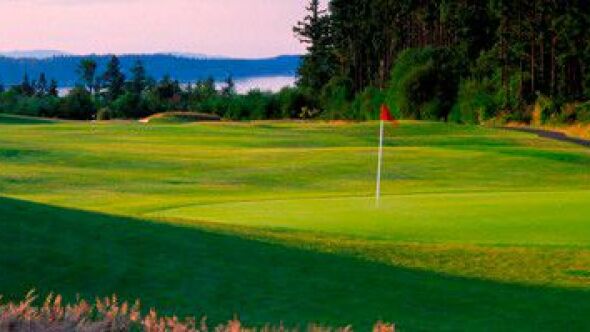 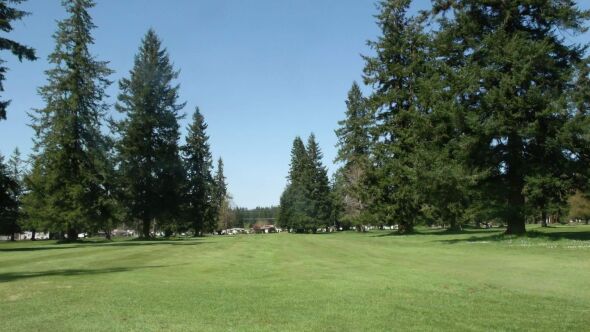 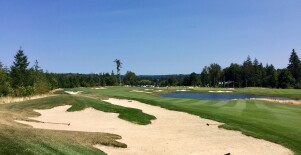 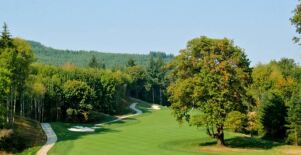 Galleries
Salish Cliffs: A gem carved out of the Pacific Northwest forest 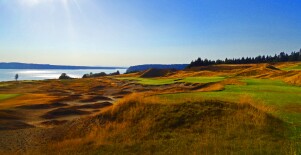 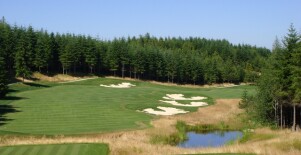 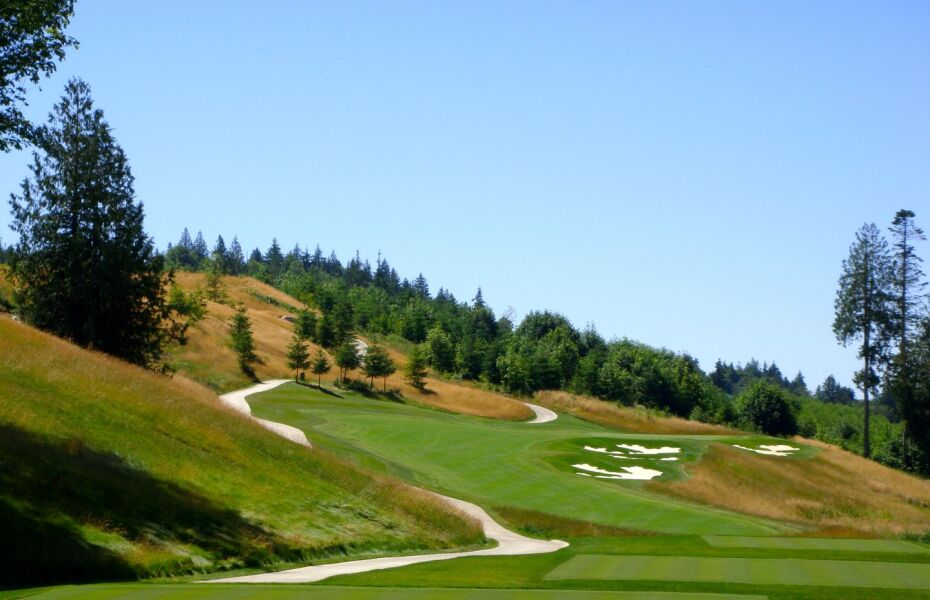 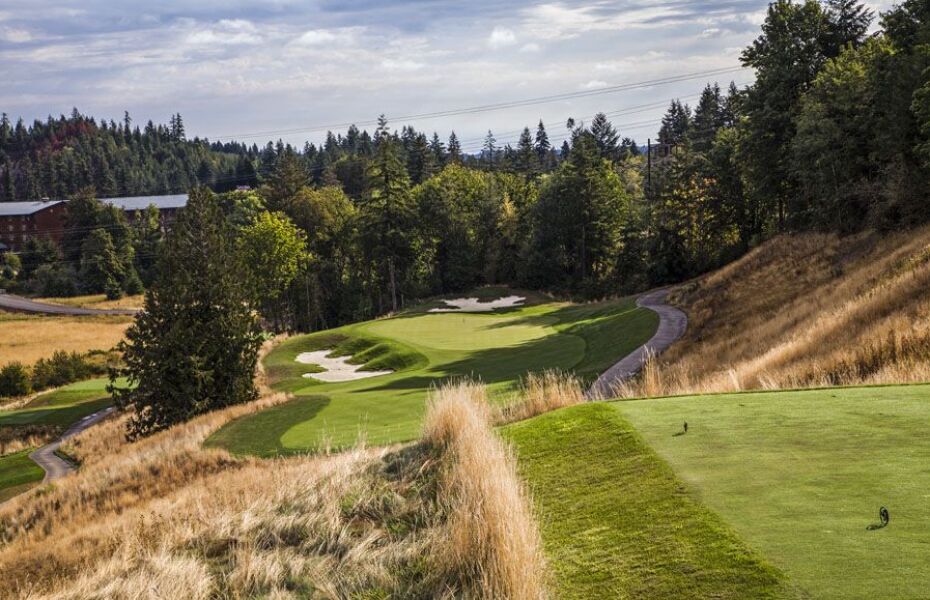 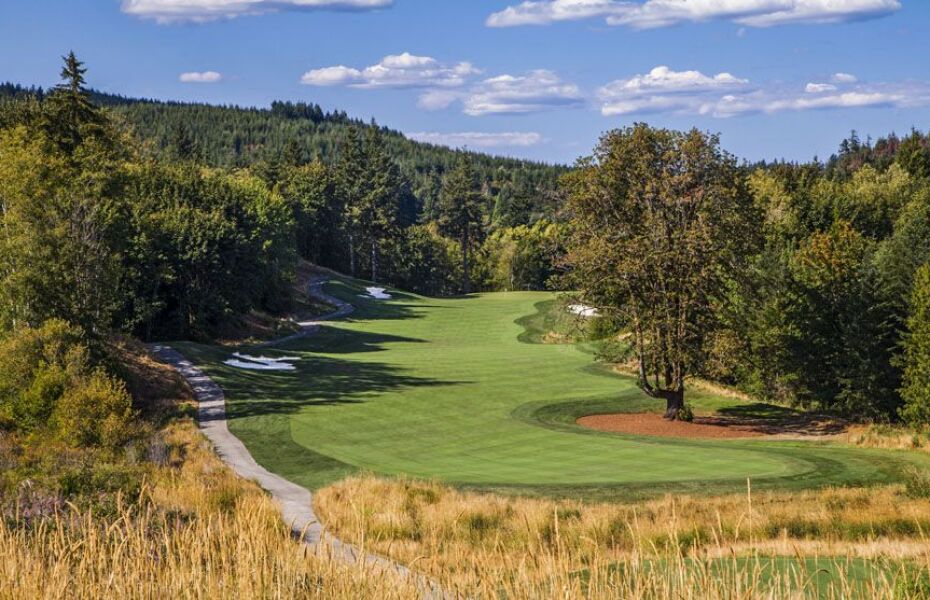 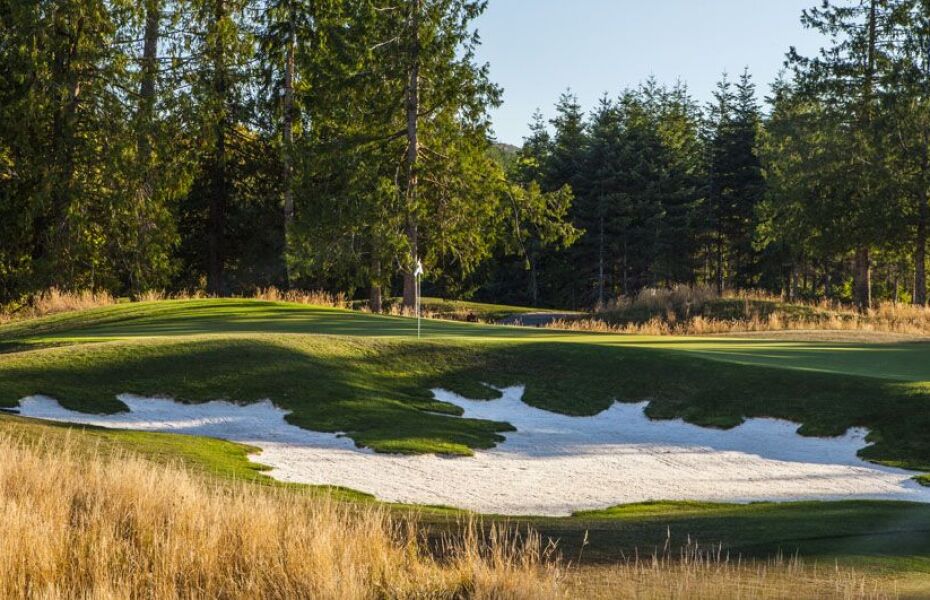 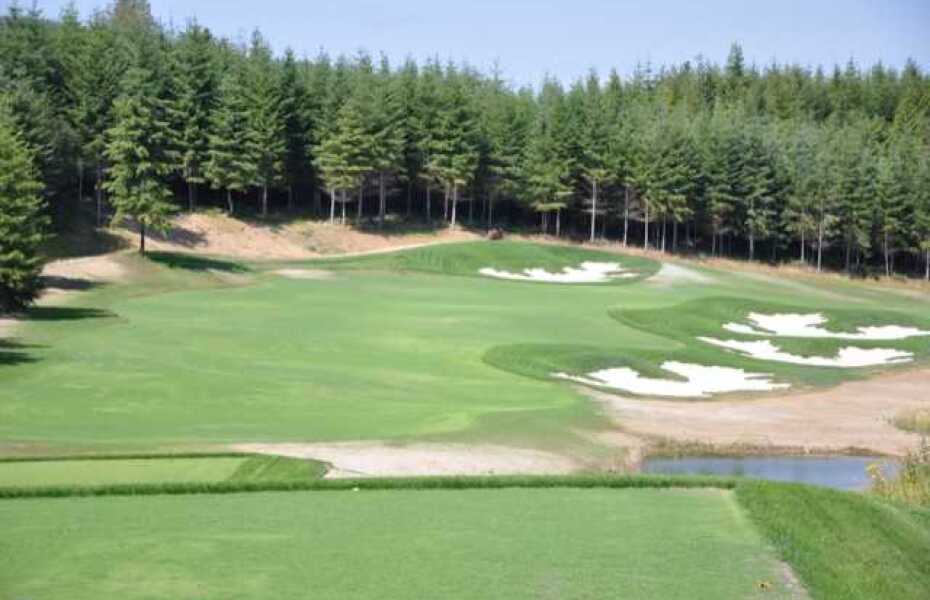