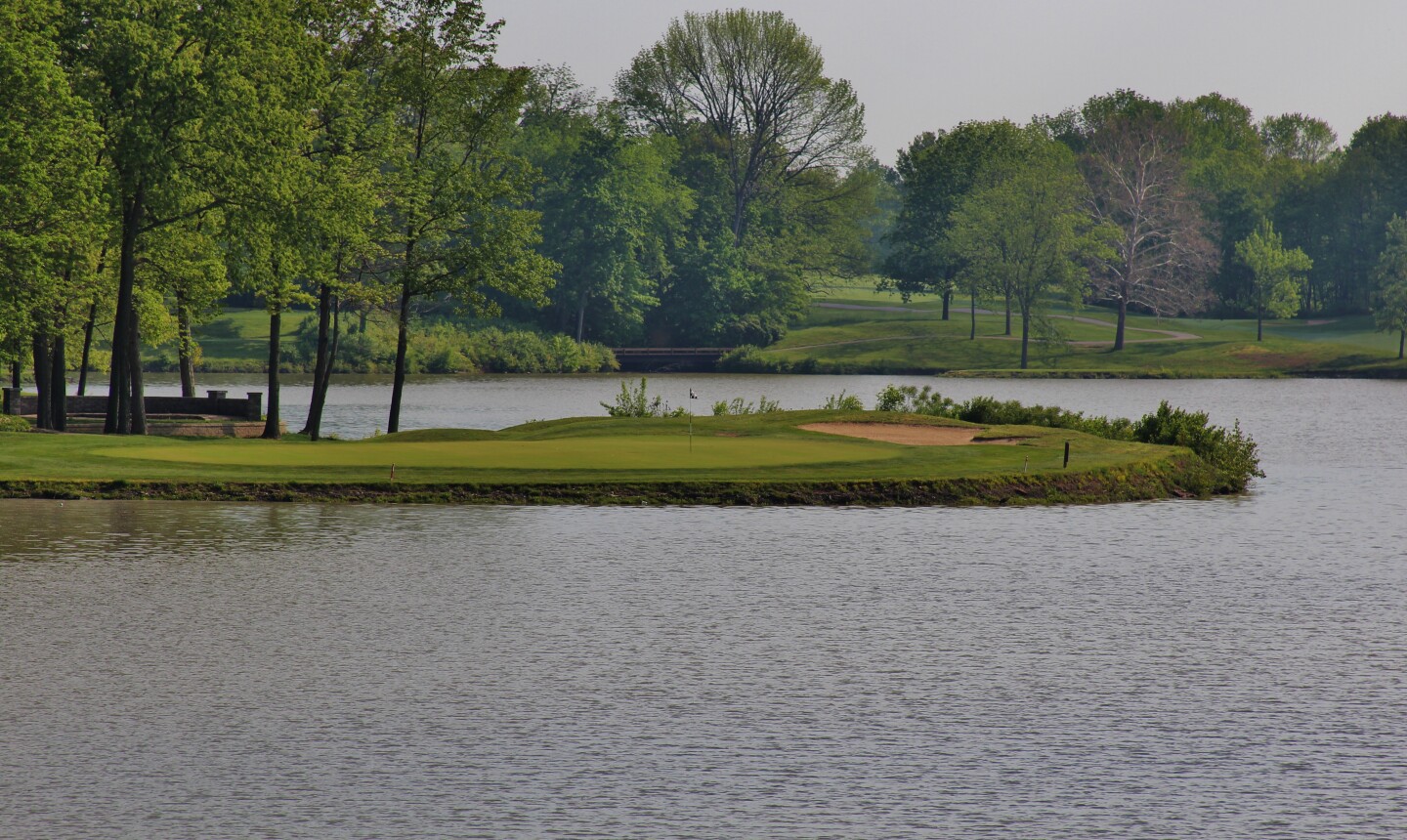 The par-4 ninth hole on the Woodlands nine at Shaker Run is one of the best holes in Ohio. Jason Scott Deegan/Golf Advisor A fisherman enjoys the peaceful lakeside scene near the ninth holes on the Woodlands and Lakeside nines at Shaker Run Golf Club. Jason Scott Deegan/Golf Advisor 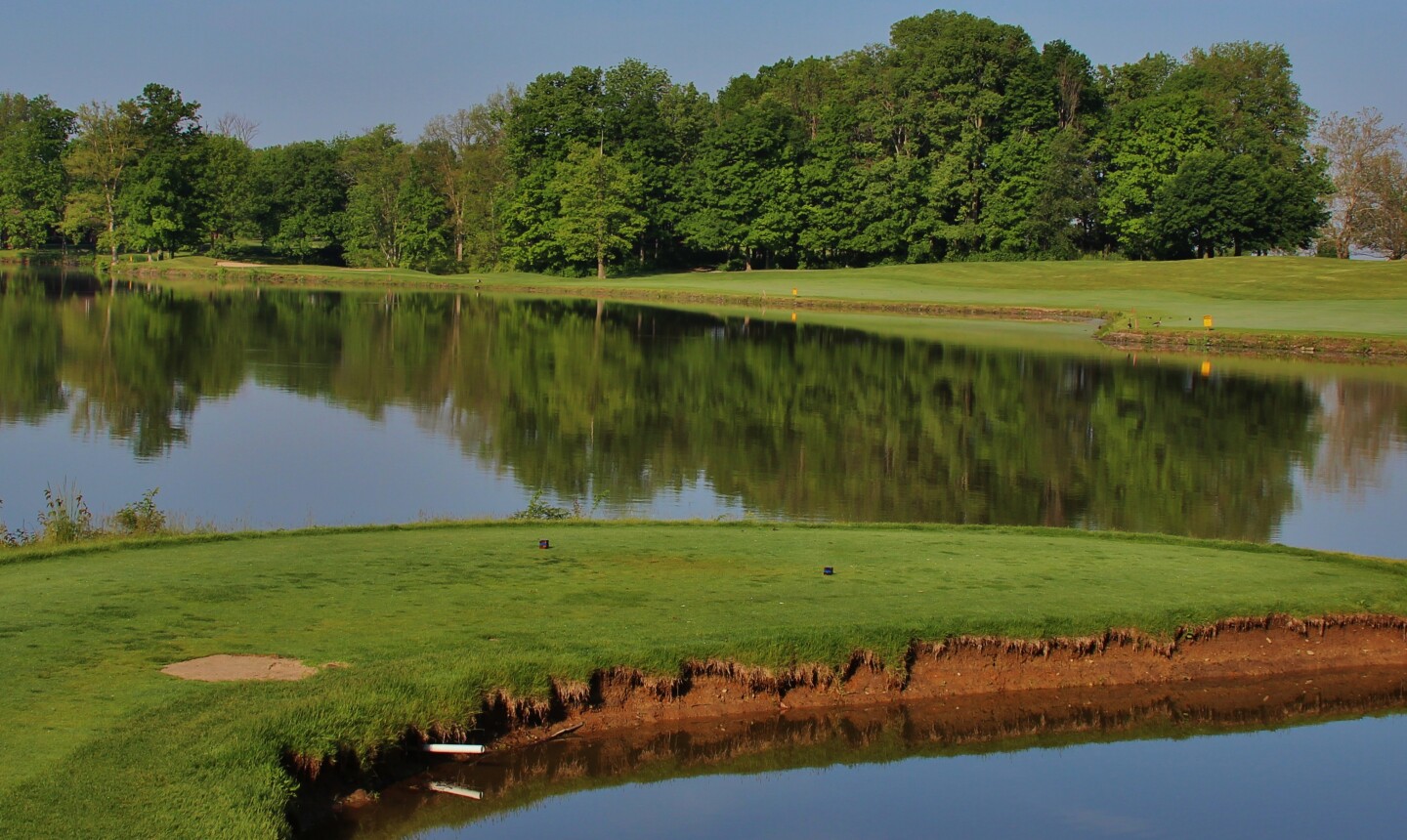 It's an intimidating tee shot on the ninth hole of the Lakeside nine at Shaker Run Golf Club. Jason Scott Deegan/Golf Advisor

It's not about finding the fairway at this fabulous, public, 27-hole facility 35 minutes northwest of Cincinnati, it's about leaving the proper angle to the green.

"Position is everything out here," admits Tyler Geswein, the club's assistant professional. "You have to find the right side of the fairway for a look. When the greens are moving, you don't want to be above the pin."

A slip in course conditioning the past few years had area golfers gossiping like school girls. The club's rock-solid reputation was taking a hit. Golfers throughout southwest Ohio were lamenting its fall from grace. New owners, Steve and Ted Lambert, a father-son duo of former PGA pros, bought and began managing the club last April, hell-bent on a return to glory. Shaker Run came in at No. 7 on the latest Golfweek rankings of the best public golf courses in Ohio.

"For 25 years, I considered this the best in the area, layout-wise," said Tom Hamrock, of Beavercreek. "It was in poor condition. I hope they are bringing it back. It's the best course in the area, public or private."

Arthur Hills designed the original 18 holes in 1979. Michael Hurdzan and Dana Frye added an okay, but not comparable, nine holes called The Meadows in 2000.

Shaker Run's Lakeside nine features two fine par 3s (No. 2 and No. 5) with water views. The fairways of both par 5s (No. 4 and No. 8) get slimmer than skinny jeans near the greens. The ninth is a gut-busting par 4, where players hit from a peninsula tee box over the lake that would be the signature hole on most courses. Not Shaker Run. There's more to come.

Extreme elevation change highlights Shaker Run's Woodlands nine. A blind tee shot on the par-4 third reveals an epic approach. A stream crosses in front of a green that sits a good six-floor elevator ride down below the fairway. The 203-yard, par-3 fifth tumbles even more dramatically downhill. Tee shots lost left will be wet. Those weakly tossed to the right will be gobbled up by trees.

Geswein calls the par-4 ninth hole on the Lakeside nine the best hole he's ever played. The 435-yard par 4 demands two heroic shots over the lake to reach the green.

"Numbers nine and 18 are fantastic position holes," Hamrock said. "You need two great shots (to reach their greens in regulation). It is a pleasure to make par on either of them. They are the best nine and 18 you will find anywhere."

When I played it in May, Shaker Run showed few, if any, of the conditioning issues countless players I interviewed warned me about.

It is hands-down the best public course I've played in Ohio. I got the full effect of the agony and ecstasy of No. 9, where I made triple bogey, and No. 18, where I made par.