We picked risk-reward holes from 7 different European countries that have represented the Ryder Cup to create the ultimate match play golf course.

How many countries have sent players to compete for Team Europe in the Ryder Cup?

This answer - 12 heading into the 2020 Ryder Cup - is quite the fun fact. That number grows to 14 with Viktor Hovland (Norway) and Bernd Wiesberger (Austria) bringing new countries into the fold this fall. It seems no matter who shows up or which country is represented, Team Europe builds a cohesive, spirited bunch ready to take down the Americans.

After much research and discussion, we chose risk-reward holes from seven different countries. We sought to represent the varied styles of golf found throughout these countries - links, parkland, heathland, coastal and stadium-style courses. Most of the selections are from courses that have proven themselves as tournament venues, whether it's a past Ryder Cup or European Tour event. All offer at least some public access.

Ultimately, we feel like we've created the ultimate Ryder Cup venue where a combination of half-par holes - some easy, some hard - will only heighten the excitement.

We've also created a hypothetical Match Play Course for Team USA. Which one would you rather play? Let us know in the comments below.

One of the "scariest" opening holes in golf leads off our routing. The dramatic first at Machrihanish, located on Scotland's remote Kintyre Peninsula, requires both bravery and skill. When the wind is whipping off the water from left to right, golfers will need to aim even further left toward the beach to hit the fairway. Any line that's too bold or any tee shot pulled left ends up on the sand. Will you be one-down after one swing?

This is a glimpse of future drama in the 2027 Ryder Cup. Adare Manor underwent a comprehensive redesign by Tom Fazio in 2018 to prepare for its next big event. Arguably Ireland's premier parkland, Adare Manor hosted memorable Irish Opens in 2007 and 2008, but match play is where holes like No. 15 will shine. Playing 354 yards, No. 15 could be drivable depending on the tee selection and wind direction. Driver misses will sink in the River Maigue on the right or bury in a deep bunker on the left. Even a layup, hindered by cross bunkers and trees, won't be automatic.

Our course wouldn't be representative of the best of links golf without a blind shot for good measure. Why not the most famous of them all? The Dell hole, No. 5 on the Old Course at Lahinch in the southwest of Ireland, plays a mere 154 yards, so it shouldn't be hard. The match play shenanigans, however, will be "brilliant!" (in our best Irish accent) when the pros round the dunes to find their ball somewhere they weren't expecting.

What's the best way to frazzle pros? Throw the wildest and weirdest green in golf at them. Again, length isn't an issue on the 378-yard 16th hole called "Gate" at North Berwick in East Lothian, Scotland. The green is narrow, raised seemingly on stilts and dissected by a gully. "This hole needs accuracy or luck," the course description reads. We prefer luck.

With four sets of tees ranging from 333 yards to 358 yards, the 16th hole at Royal Lytham & St. Annes might tempt players to pull driver. Considering it's a blind tee shot with nine bunkers lurking, that might not always be the prudent play unless you have a short game like Seve Ballesteros. The Spaniard made a magical birdie after a wayward drive into a temporary car park in winning the 1979 Open Championship. England Stay-and-Play Golf Package

There are so many obstacles to hitting a good shot on the new 9th hole on the Ailsa Course at Trump Turnberry. Visually, the cliff carry at 258 yards is intimidating, while the ruins of Robert the Bruce's Castle and the Turnberry Lighthouse are equally distracting. Factoring in the wind and three greenside bunkers, this epic par 3, created during a dramatic redesign by Martin Ebert in 2016, will be all any pro can handle under pressure.

Ballesteros redesigned Valderrama's par-5, 536-yard 17th before the 1993 Volvo Masters, creating a challenging green tucked beyond water that would have a profound impact at a Ryder Cup, two World Golf Championships and more than 20 European Tour events. Its natural amphitheater in Sotogrande, Spain, can accommodate 7,000 spectators. Tiger found the water with both his putter (1997 Ryder Cup) and wedge (1999 WGC-American Express Championship).

Trouble at the Postage Stamp

Yard for yard, the 123-yard 8th hole on the Old Course at Royal Troon in South Ayrshire, Scotland, might be the hardest in golf. The "Postage Stamp" hole got its name thanks to William Park of "Golf Illustrated." Hitting into any of the five pot bunkers ringing the putting surface can result in the cruelest of lies, with the "Coffin" bunker on the left being the deadliest.

France's version of stadium golf abused the Americans at the 2018 Ryder Cup. The mounding and water of Le Golf National's Albatros Course outside Paris tortured the foreigners. We could have picked numerous waterlogged holes - the par 4s at Nos. 1 and 13 for example - but went with the 408-yard 15th, a narrow bender that ends at an island green, which shares land with the 18th green. The farther players try to drive it to get a shorter club in hand, the tighter the fairway constricts.

Architecture critics have been known to pan The Belfry's Brabazon Course, host of four Ryder Cups in Sutton, England, from 1985-2002. But the par-4 10th is match-play gold. The green, guarded by overhanging trees and a small creek, tempted even short hitters to give it a go, playing 287 yards during the first three matches. European Captain Sam Torrance shifted the tees back to 311 yards in an attempt to favor his shorter-hitting team in 2002, an unpopular opinion for players and fans. "It was the perfect match-play hole," Woods said, according to Golf Digest. "You could make 2 or you could make 6. That's what made it so much fun."

The Old Course at Walton Heath, host of the 1981 Ryder Cup and a few other European Tour events, starts with a slew of half-par holes in a row: The opening par 3 (235 yards) followed by three straight unique par 4s - the 461-yard second, the 289-yard third and 519-yard fourth. The 289 yards at No. 3 might not scare the pros but for regular golfers, it's a drivable par 4 that anyone can reach. A couple bunkers and some rumpled ground make things interesting.

The par-5 12th at Old Head in Ireland might be the most visually intimidating golf hole in the world. From the tee, all a golfer sees is cliffs, 537 yards of them. The drive is simply terrifying. So is the second shot ... and the third ... and the fourth. The fairway acts as a funnel, shrinking into a sliver of an opening before a raised green. Only the bold go for it in two.

The Bro Hof Slott's Stadium Course in Stockholm - the consensus No. 1 course in Sweden - hosted the Scandanavian Masters from 2010-2016 and could someday attract a Solheim Cup, given Sweden's ties to Annika Sorenstam. Much like the island green at the TPC Sawgrass, the 150-yard shot should be easy for world-class players. Wind and nerves make it anything but.

No. 16: Championship Links at Royal County Down | Par 4

Although the 9th is the most famous hole at Royal County Down in Northern Ireland, the short 337-yard 16th is arguably the better risk-reward tee shot. Depending on the tee placement, longer hitters may attempt to reach the well-protected green or play conservative to lay-up. Any weak attempts right will dive into deep fairway bunkers or heather on low ground. The green slopes away to make matters worse.

We've all witnessed infamy at men's and women's majors on the 444-yard finishing hole at Carnoustie - Jean Van de Velde in the Barry Burn in 1999 and Nanna Koerstz Madsen's bunker shank in 2021. The demanding par 4 seems to deliver the voodoo hex at the worst of times. The burn always lurks, both off the tee and the second shot. If players are too timid off the tee, it leaves a longer, tougher approach.

They call it "Calamity Corner" for a reason. The 236-yard 16th on Dunluce at Royal Portrush in Northern Ireland can wreck anyone's day. Missing right or short on this uphill par 3 just isn't an option. The bailout is left but that leaves a tricky up-and-down to save par. A bolder line might be required in a match going down to the wire.

Anything can happen from tee-to-green on the famous Road Hole at St. Andrews, one of the best examples of a "half-par" hole that shines in match play. Off the tee, golfers must decide how daring they want to be with their line - hugging the O.B. on the right may provide the best angle into the green and help avoid the Road Hole Bunker. Approach shots long may find the road, which will require ample creativity to get up and down. A golfer is never truly out of it on the Road Hole until the putt drops. 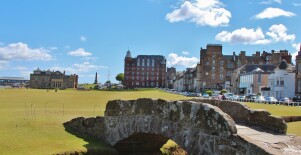 The closing hole at Castle Stuart proved its match-play chops at several memorable Scottish Opens in Inverness, Scotland. Phil Mickelson, never one to play up, has had all sorts of lies, successes and failures at this 595-yard, downhill par 5. The fairway doglegs to the right, setting up a scenic approach to the course's largest green with the Moray Firth as the backdrop. Approach shots up the left side can funnel down onto the putting surface or better players can directly attack the flag for a better chance at eagle.

- Brandon Tucker and Tim Gavrich contributed to this article.

What other holes at famous courses would be ideal for Team Europe's ultimate match play course? Let us know in the comments below.